The Palmetto State’s industrial engine would sputter without the critical contributions of its three ports. A fourth is in the planning stages. 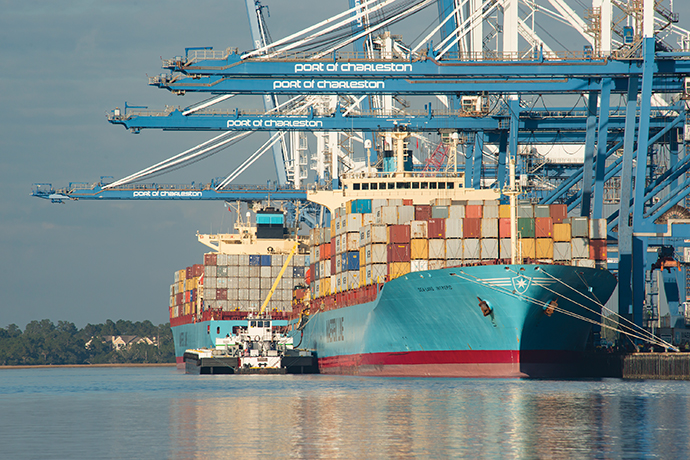 Whether they’re on the Atlantic seacoast or 200 miles inland, South Carolina’s ports are the vital organs of the state’s industrial economy. From Boeing and Volvo in the Charleston area to the Upstate’s automotive corridor anchored by BMW and Michelin to hundreds of other manufacturers around the state, the ports make possible South Carolina’s voluminous industrial output — and its status as the top Southeastern state for export growth. But it’s not just heavy industry that benefits from port proximity.

“Dollar Tree has been extremely impressed with the South Carolina transportation infrastructure which will support the Upstate distribution center,” noted Stephen White, the national retailer’s chief logistics officer, during the July 2015 announcement of the $104-million project. The center will be sited in a business park on the Cherokee-Spartanburg County border. “The current Interstate 85 widening project and the efficiencies associated with the Greer Inland Port were instrumental in our site selection process.” Dollar Tree expects to employ about 400 at the center over the next five years.

“[Dollar Tree’s] Upstate location is ideally suited for serving the growing Southeastern consumer market, and the Inland Port in Greer provides them with overnight access to import cargo for retail distribution,” added South Carolina Ports Authority (SCPA) President and CEO Jim Newsome. “The port’s investment in infrastructure to support Dollar Tree operations will be returned through significant volumes over the coming years, and we look forward to serving their import logistics needs.”

How Significant an Upstate Impact?

In 2015, the University of South Carolina’s Darla Moore School of Business produced an economic impact study that quantifies the ports’ contributions to statewide prosperity. (In addition to the Inland Port, SCPA administers the Charleston and Georgetown Ports.) Those contributions include:

The economic impact study breaks down that impact regionally, and the Upstate contribution is significant. Following are highlights for the Upstate analysis executive summary:

The Greer Inland Port will soon undergo an expansion, and a second inland port is in the planning stages. For more on the statewide economic impact of South Carolina’s ports and additional regional analyses, visit www.scspa.com.