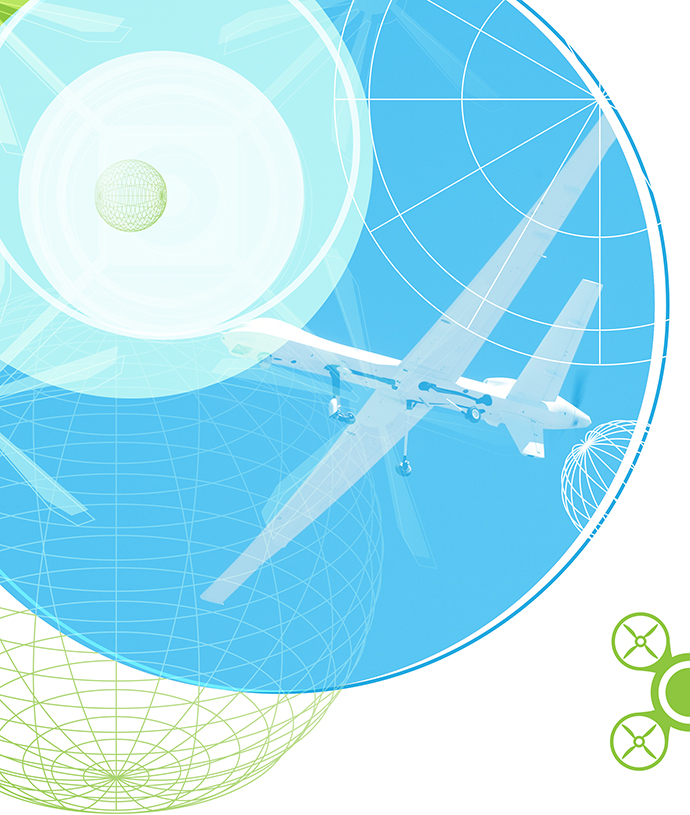 Geographic clustering data on global UAV firm locations is scarce, but we found some. Next time, maybe we'll use a UAV.

Close to 3 million unmanned aerial vehicles will be sold in America this year, generating around $950 million in revenue, according to the Consumer Technology Association.

Americans are growing increasingly familiar with — and increasingly perturbed by— the presence of those drones: hovering over your backyard while you’re gardening, grabbing footage of your kid’s athletic competition or making that perfect flyover video as you put your house on the market. As of mid-January, nearly 300,000 owners had registered their small unmanned aircraft in the first 30 days after the Federal Aviation Administration’s (FAA) online registration system went live. Owners who registered in the first month received a refund for the $5 application fee.

More elusive, hidden even from those UAVs’ prying eyes, are the operating locations of companies that either make or deploy them for their livelihoods.

One swath of companies — those who deploy UAVs commercially — has to apply to the FAA to obtain what’s known as a 333 exemption allowing them to operate. Section 333 of the FAA Modernization and Reform Act of 2012 grants the Secretary of Transportation the authority to determine whether an airworthiness certificate is required for an unmanned system to operate safely in the National Airspace System (NAS). The authority is being leveraged to grant case-by-case authorization for certain unmanned aircraft to perform commercial operations prior to the finalization of the Small UAS Rule. 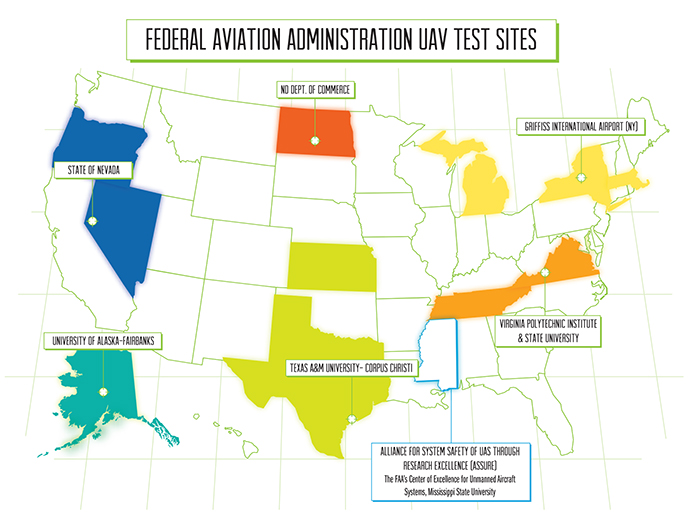 As of January, some 3,155 companies had obtained those exemption certificates. However, the location data is only publicly obtainable by individually opening 3,155 PDF copies of the official authorization notification letters sent to the companies.

FAA spokesperson Laura Brown confirms that there is no backup FAA spreadsheet or database of these files. Registrations of the aircraft can only be found by navigating the complex, 1950s-style web of categories, definitions and codes known as the FAA aircraft registry. Asked for geographic data on the 300,000 consumer recreational and hobby registrations, she says, “We don’t currently have easy access to state-by-state registration numbers, but hope to be able to provide that sometime in the future.”

“Even as we pursue our current rulemaking effort for small unmanned aircraft, we must continue to actively look for future ways to expand non-recreational UAS uses. “This new initiative involving three leading US companies will help us anticipate and address the needs of the evolving UAS industry.”
— Michael Huerta, FAA Administrator, May 2015

So we turned to another source, UAVGlobal.com, which maintains and frequently updates headquarters location and vehicle model data on a current total of 443 UAV manufacturers globally. The United States leads the way with 93 firms — the state with the most UAV companies is California. Following the US, in order, are the UK (29 companies), China (27), France and Russia (24), Germany and Israel (13), Brazil (12), Japan (11), and Australia, Italy and Poland with 10 UAV companies apiece.

The charts and maps on these pages show which countries and cities lead the world in UAV firms. Some clusters are more regional in nature: The Washington, D.C., area (including Jessup, Md.) encompasses an even dozen UAV companies wanting to be close to the seat of government and military power. And a total of nine manufacturers are located in Boulder, Broomfield, Denver, Englewood, Longmont and Fort Collins in Colorado.

“The Moscow cluster is probably due to most Russian companies which produce UAVs also being large Cold War-era arms manufacturers who would naturally congregate close to the seats of power of that country. Beijing has the same structure, as what we in the West would call a ‘company’ would actually have started life as a government bureau, and in some cases continues to be an arm of the government just renamed to be more acceptable to foreign investors and customers.”

Struik says the UAV industry as a whole is still in an early rapid-growth phase, “with many small startups appearing and disappearing a year or so later while the more successful companies go on to be acquired by larger rivals. But we are still a long way from an industry contraction down to four or five big players like we saw with the aircraft industry.” 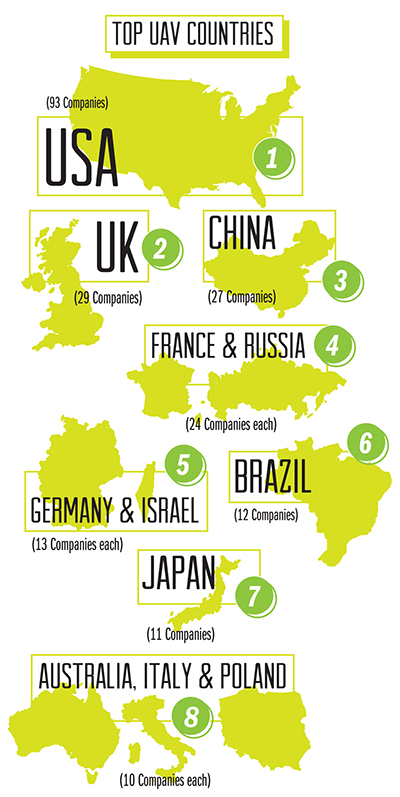 UAVGlobal.com does not track data on commercial UAV deployers. But, says Struik, “from our experience, UAV deployment is currently focused in areas which match the industries where they have the highest take up i.e. forestry, agribusiness, oil and military theaters in conflict zones. I wouldn’t be surprised to see more companies appear in the Washington, DC/Virginia corridor for the military side, and more companies in Denver and Houston serving the oil industry. As forestry and farming is so spread out across the USA, I can instead only imagine regional hubs popping up, as opposed to any centralized location.”

In December 2013, the FAA concluded a 10-month selection process by naming six unmanned aircraft systems (UAS) research and test site operators across the country, some of them incorporating multiple sister sites (see map).

In May 2015, the FAA followed up by selecting a Mississippi State University team as the FAA’s Center of Excellence for Unmanned Aircraft Systems (COE UAS).

“This world-class, public-private partnership will help us focus on the challenges and opportunities of this cutting-edge technology,” said U.S. Transportation Secretary Anthony Foxx. “We expect this team will help us to educate and train a cadre of unmanned aircraft professionals well into the future.”

The Mississippi State-led Alliance for System Safety of UAS through Research Excellence (ASSURE) is operating the new COE. While research will take place at member universities throughout the US and globally, the center’s work will be concentrated at Stennis Space Center in Hancock County to take advantage of airspace over the Gulf of Mexico, in the Mississippi Delta to conduct unmanned precision agriculture research, and around MSU’s Raspet Flight Research Lab in Starkville.

The COE research areas are expected to evolve over time, but initially will include: detect-and-avoid technology; low-altitude operations safety; control and communications; spectrum management; human factors; compatibility with air traffic control operations; and training and certification of UAS pilots and other crewmembers, in addition to other areas. The FAA expected the COE to be fully operational and engaged in a robust research agenda by January 2016.

Also in May 2015, at the Association for Unmanned Vehicle Systems International Unmanned Systems 2015 conference in Atlanta, Ga., the FAA announced a partnership with industry to explore the next steps in UAS operations. The FAA is working with industry partners on three focus areas, including:

Visual line-of-sight operations in urban areas: CNN will look at how UAS might be safely used for newsgathering in populated areas.

Extended visual line-of-sight operations in rural areas: This concept involves UAS flights outside the pilot’s direct vision. UAS manufacturer PrecisionHawk will explore how this might allow greater UAS use for crop monitoring in precision agriculture operations.

AEROSPACE: Nevada and five other sites are chosen for UAV development work (Jan 10, 2014)