US pricing is more competitive than before, but companies must carefully negotiate incentives and conduct state-by-state, regional research.

Finding affordable energy is one of the most important factors in identifying and choosing the right site when a company is expanding or relocating — especially in the case of large industrial facilities. The electric power industry has seen significant changes in the last decade, with industrial electricity prices trending down due to the increase in natural gas supply.

Energy pricing can vary widely by state, by region and, importantly, within regions. At the same time, it is important to keep in mind that while electricity prices are important, a particular region should not be ruled out on these costs alone.

Electricity prices in the US have been stable or have seen downward pressure over the past couple of years. According to the US Energy Information Agency (EIA), US industrial electricity rates increased 11.9 percent over the 10-year period from 2006 thru 2015 (1.2 percent annually). However, prices declined by 2.1 percent from January 2015 to January 2016. The EIA has forecast virtually no price increase for 2016 and a 1.9-percent increase in 2017.

The largest driver for these record low costs is a significant increase in the supply of natural gas and the environmental pressure to convert to cleaner fuels. Many US utilities are converting or shutting down coal-fired generation facilities in favor of combined-cycle natural gas plants.

Regionally, US industrial electric prices vary considerably, with New England leading the country. As of January 2016, New England’s average price for industrial electrical power was 12.1 cents per kWh, nearly double the US average of 6.43 cents. The Pacific region is the next most expensive region, with average prices approximately 33 percent above the national average.

In the Mid-Atlantic region, prices vary from a high of $0.10 per kWh in New Jersey to a low of $0.0547 per kWh in New York. However, New York may have the largest variance in pricing in the country. The state benefits from hydroelectric energy in the northwest sections of the state, but the New York City region is extremely costly due to its congestion, significant underground facilities and high maintenance costs.

According to the EIA, the average 2014 utility bundled retail industrial site in New York ranges from over $0.20 per kWh in the New York City metro, to just over $0.0324 per kWh in a community with a municipal-owned utility in Upstate New York.

It is essential to review the total cost of supply to each particular site for evaluating locations for a manufacturing operation, or any large energy-consuming facility.

Other critical factors impact the total cost required to provide electric service. Some of these costs are offset by credits or refunds via a utility’s tariffs and/or service policies.

Companies with large electric operating costs should consider analyzing tariffs and rates for any hidden costs that may make the area more expensive, such as duplicate service cost, demand ratchets, line extensions, revenue credit, security deposits and startup costs that negatively impact facilities with large electricity requirements. A review of the tariffs and service policies may also reveal that the true costs of a particular site are significantly below the published industry averages.

The impact of electricity prices on site location decisions varies widely— and largely depends on the percentage that these costs contribute to overall operating cost.

Electricity costs for industries such as metals, chemicals, plastics and data centers are typically a large percentage of overall operating cost — therefore, electricity costs are a major factor in the site selection process.

Here is the percentage of electricity prices paid by the following industries, based on their overall operating costs, from our recent research:

Although data centers are not in the industrial sector, they typically incur electric costs of up to 60 percent of overall operating costs — which has a significant impact on location decisions. Therefore, data centers that are not tied to financial or commodity markets will seek regions with low-cost electricity.

Over a decade ago, certain states deregulated their electric utility industries (see map). The states uncoupled the generation of electricity from the transmission and distribution delivery services. This offers companies the option to procure a commodity (kWh) from a third-party supplier in an open market. 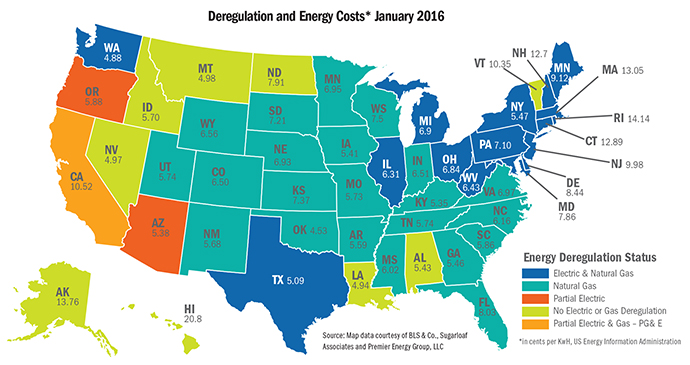 From our experience in providing commodity procurement service, industrial and high-load-factor customers can often purchase commodities significantly below the regional average price. As an example, we recently negotiated a five-year electric commodity agreement in Texas for a fixed price of 3.5 cents per kWh. This resulted in an “all in” electric price below 5 cents per kWh. This price compares to 5.6 cents per kWh in the region, and the Texas 2015 average cost of 5.9 kWh.

Another opportunity to control electricity costs is with utility incentives. Utility companies offer incentives for the same reasons states do: They have millions of dollars of investments in their service territories, and many have capacity available along existing infrastructure.

Determining available incentives is often difficult since utility service territories don’t typically fall along established state, city or county lines. Also, most states have more than one utility company, and each will have different incentive options available for companies expanding or relocating into a particular service territory. The incentives offered by utility companies typically range from two to five years, with a few lasting longer.

China vs. US Electric Prices

BLS & Co. and Tractus Asia, our partner in Asia, have just completed the first “apples to apples” analysis of industrial electricity costs in the US versus China. We found that median electricity prices for industrial loads in the US tend to be 34 to 49 percent lower than Chinese prices, with point-to-point comparisons varying between a 15-percent and 70-percent savings in the United States. 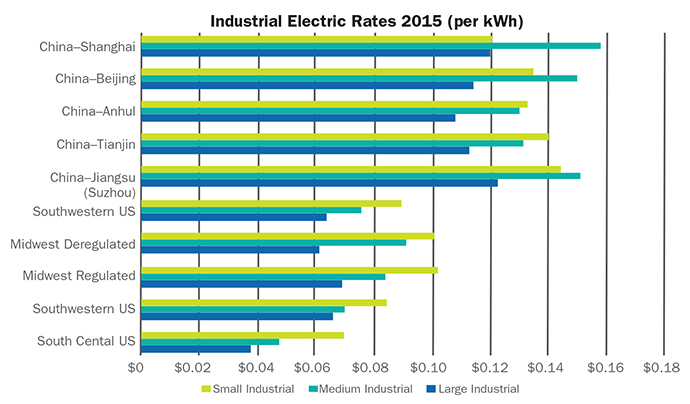 Why? China’s electricity prices rose much faster than those in the US over the past 10 years, growing by 17.5 percent vs. 11.9 percent. Looking forward, this gap is not expected to diminish in the short term, as China is still recovering the costs of having invested so heavily and quickly in infrastructure in recent years.

To compile this information, BLS & Co. worked directly with US utilities, and Tractus Asia consulted with authorities from China’s State Grid Corporation.