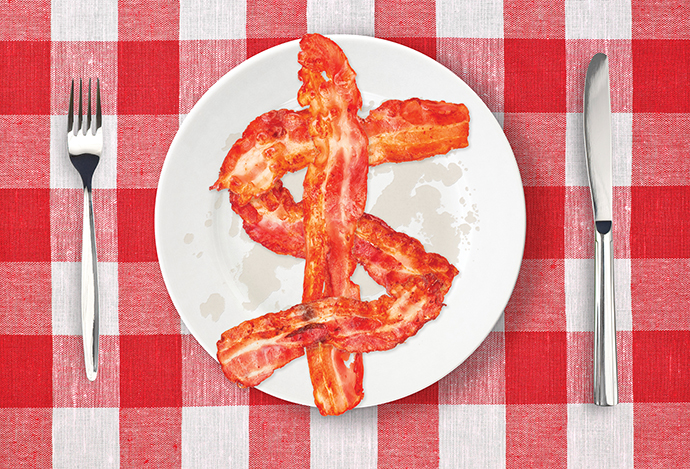 Though Iowa can legitimately tout itself as a hub for advanced manufacturing and financial services, the state’s core strength remains food production and processing. In the most recent figures from the Bureau of Economic Analysis and US Census, close to one quarter — 24 percent — of Iowa’s manufacturing GDP is derived from the food processing industry. It’s a sizeable job creator as well. Hundreds of thousands of Iowans work in the agriculture or food processing industries, from farms to factories. In 2015, food production or processing projects dominated industrial location and expansion headlines — especially in job creation.

The largest project by far in terms of jobs was the 2015 announcement that Seaboard Foods, headquartered in Merriam, Kansas, and Triumph Foods, headquartered in St. Joseph, Missouri, had formed a joint venture and planned to expand in the Sioux City region. The new company, dubbed Seaboard Triumph Foods, is investing $264 million to build a new 600,000-sq.-ft. (55,742-sq.-m.) pork processing facility on a shovel-ready, 250-acre (101-hectare) industrial site. The plant will process up to 3 million market hogs annually.

The project creates 1,100 full-time jobs, from a local executive leadership team to workers on the line. Hiring has already begun for startup in summer 2017. “Not included in that figure are all of the construction jobs, which are not permanent,” adds Irving Johnson, director of communications and community relations for Seaboard Triumph Foods. “And that is to say nothing for the rollover to area business who will provide transportation, materials and other services to the company.”

Why Sioux City? Several reasons, says Johnson: “Existence of a shovel-ready industrial site location, transportation infrastructure, availability of market hogs in the region, the pro-business environment demonstrated by city leaders, the Iowa Economic Development Authority and the State of Iowa throughout the site selection process, and a workforce that is already familiar with food manufacturing.”

In a demonstration of goodwill, Seaboard Triumph is taking care to be a good neighbor both in the design of the new facility — which will incorporate modern architecture — and custom landscaping both for aesthetic and buffering purposes. “The new processing facility doesn’t look like one, doesn’t behave like one and doesn’t smell like one either,” says Johnson. “The objective is to repurpose all waste streams. Typically, a lot of the odor associated with pork plants comes from valuable waste streams. In our case we plan to recapture the methane and use it in our boilers. It’s not something we want to get away.” Johnson says construction is well underway and the project is on target for its 2017 opening.

While the promise of 1,100 jobs is cause for celebration, there are some tempering concerns. Iowa’s unemployment rate stands around 3.4 percent, one of the lowest in the nation. Companies with higher workforce needs often have to recruit from out of state. Johnson says Seaboard Triumph took those factors into consideration and took the plunge anyway. “We will be developing an innovative staffing strategy to recruit and retain employees from all around Siouxland and the surrounding regions,” he says. “We are confident that our attractive benefits and market-based wages combined with our culture will ensure that we become an employer of choice in the community.”

When a Loss Is a Win

The 2015 merger of Kraft Heinz meant significant changes in the form of moves or plant closures at locations throughout the US in 2015. The meat processing plant in Davenport was no exception. The facility, which employed 1,400 workers, looked like it was slated for closure. Thanks to swift moves on the part of the Iowa Economic Development Agency (IEDA), Kraft Heinz is instead shuttering the older facility and investing $200 million in building a new production plant that will employ 475 workers. The IEDA gave Kraft Heinz a $4.75-million incentive package which includes a $3-million forgivable loan paid after demolition of the current facility, $1 million in tax refunds and $750,000 in research tax credits. Debi Durham, director of the IEDA, called the incentives a “future play” in comments made to the Des Moines Register. “This is a legacy play,” she said. “And I feel good about what we did here today.”

Rembrandt’s expansion had as much to do with long-term corporate strategy as market demand. “The expansion in Thompson aligns with Rembrandt Foods’ strategy to improve and expand the company’s successful, fully integrated business model,” said the company in a statement. “This will be in-line allowing for full traceability and total control over every aspect of the egg production and processing. In addition, dried egg products eliminate transportation of water, making them cost-effective, environmentally friendly and more marketable to the customer.”

In 2012, total production agriculture and ag-related industries accounted for $112.2 billion, or more than 33 percent of Iowa’s total output.

Farming provides the base for a variety of agri-food industries, including food processing and the manufacture of farm machinery, chemicals and fertilizer. Taking those jobs into account means that in 2012, production agriculture and ag-related industries accounted for 418,771, or one in every five Iowans.

Crop farming is a significant part of agriculture’s economic contribution. Statewide output attributed to crop production and further processing is just under $47.2 billion and is responsible for 183,379 jobs.

Livestock farming is also a significant part of agriculture’s economic contribution. Statewide output attributed to livestock production and further processing is just under $31.6 billion and is responsible for 122,764 jobs.

The 2014 Iowa Ag Economic Contribution Study was prepared by Decision Innovation Solutions based on data from the 2012 Census of Agriculture.