A Careful Approach to Change IAMC is now in the fifth year of its nascent International outreach and expansion. Our first Professional Forum-scale event is coming up in London June 21-23 in conjunction with the Society of Industrial and Office Realtors (SIOR). During 2016, IAMC is also holding events and meetings in Mexico, Brazil and Singapore to build on the success of prior meetings held in those countries. We have developed a core of enthusiastic local supporters in each region who have helped foster the IAMC brand and culture. While a few members have reserved judgment on the International program, and I have been there myself, I can report that IAMC is beginning to reap benefits from this project.

A recent study by the ASAE Foundation and MCI Group says, “Those associations that successfully engage worldwide have higher membership growth and more non-dues revenue than those that don’t.”

IAMC is at a point in its maturity where it needs diversified sources of revenue to fund new services and member benefits to keep up with members’ rising expectations and changes in the real estate industry. If we succeed here, member retention rates stay strong. But there is a balancing act — to simply add members in North America to boost revenue would also increase Professional Forum attendance beyond the comfort threshold for many members. Intimate-sized meetings are an important element of IAMC’s brand and values.

On the other hand, growing membership overseas for the benefit of Forums located in IAMC’s Latin America, Asia and Europe regions could solve the dilemma. Thereby, membership and revenue can grow without inflating current Professional Forum attendance and lessening IAMC’s traditional conference experience.

Active members are encouraged to attend Forums in all four global regions. Associate members must apply for and meet membership balance requirements in each region.

As a result of our London Forum marketing efforts, IAMC is growing the Active membership, particularly among end-users based in the United Kingdom and Europe. In the last 12 months, we’ve added seven new Actives from this region. And the other three regions will follow suit as they mature.

With the international membership growth, we’ve made tremendous progress bringing in new forms of revenue. As of this writing, we have over $100,000 of sponsorships pledged just for the London Forum. And the positive revenue trend should continue as the International program gains momentum.

We have a ways to go before IAMC International is viewed with the same strong reputation that past new programs, such as the Industry Groups and IAMC Local, have reached. Our membership policies should enable us to grow globally while maintaining the smaller event sizes and networking quality our members prize. One of the most challenging aspects of leading this organization is adapting to change while maintaining our core values and strengths. That has been the approach to growing IAMC International. I am proud to say it seems to be working.

No Assembly Required:  The Future of Global Manufacturing

Editor’s Note: This article is excerpted from an April 28, 2015, presentation by Peter Zeihan, founder, Zeihan on Geopolitics, to a plenary session of the Industrial Asset Management Council’s Palm Desert, California, Professional Forum. The session was sponsored by Johnson Controls, Inc.

Demographic, economic, and energy shifts are turning everything we know about global and national economies upside down. Among the developed nations, the United States is expected to be in a strong economic position due to the consumption power of Generation Y, capital flight from abroad and favorable energy resources and transportation systems. However, many countries and regions that were attractive for manufacturing in the past are evolving into less compelling destinations for business. Along with the United States, areas that bear further consideration in coming years include Southeast Asia and Mexico, as well as a handful of other countries around the world.

Based on a confluence of economic trends, certain parts of the world will be more favorable for manufacturing and other business operations:

The United States: The US economic geography is perfect for business. The US has the greatest maritime and agricultural systems, thanks to the arable land of the Midwest and the country’s rivers and ocean access. Shipping goods by water is one-twelfth the cost of other transportation modes.

America’s natural gas is another valuable resource. There is over 150 years’ worth of natural gas in the country, and shale fields in Texas and North Dakota produce enough natural gas merely as a byproduct of oil production to satisfy 60 percent of the nation’s natural gas consumption. In addition, the price of electricity is half the cost in China and one-third the cost in Germany.

Southeast Asia: The future for this region looks fantastic. Its coastal cities are dense, thriving industrial centers. The cost of labor is low, and the population is very young, so labor rates are unlikely to increase over time. Low-skilled labor is accessible in Vietnam and Indonesia; mid-skilled labor is available in Malaysia and Thailand; and technology can be delivered from South Korea and Taiwan. The area has a low-cost, dynamic free-trade system.

Northern Europe: Consumption and debt are concerns here. Northern Europe’s rivers are the most densely trafficked trade corridor in the world. When the European Union (EU) was formed, leaders hoped the North’s financial strength would penetrate the Southern countries and raise economic standards there. Unfortunately, the opposite occurred.

The EU (composed of fiercely independent countries) has hollowed out Southern Europe’s industrial capacity, while Southern Europeans have borrowed considerable sums from Northern Europe. It will be difficult for the continent to get out from under this debt. 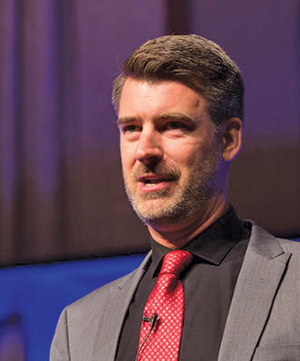 From a US perspective, the United Kingdom is appealing for cultural reasons.”
— Peter Zeihan

Italy and Greece are in particularly challenging situations. In Central Europe, consumption is high now, but will decrease in five years. From a US perspective, the United Kingdom is appealing for cultural reasons.
Denmark and the Netherlands are attractive because they are the central access points to Europe from the wider world.

China: This country’s labor force is past its prime. China is not a strategic threat. It is dependent on the Bretton Woods system that sought to eliminate destructive impediments to world trade after World War II. The bordering countries are antagonistic toward China, and without their support the country is effectively landlocked. China’s prosperity won’t last because the long-time but recently revised one-child policy limited the number of young workers that will be available in the years ahead.

Mexico: Mexico is poised to be the economic success story of the next 50 years. As the US strengthens its energy relationship with Mexico through shale oil pipelines, the country will increase its manufacturing base. Labor costs are lower here than China’s, and labor is of higher quality. Ironically, the country’s violent drug war has reduced labor costs, which has led to greater internal investment. Mexico is also well positioned to become a consumption economy due to its normal population demographics.

Argentina: This nation has the best economic geography outside the United States. However, its people have become complacent over time. If a change in government occurs, it could become a good location for manufacturers.

Angola: After concluding a civil war, Angola needs infrastructure and buildings. The country will work with anyone and is willing to pay cash. One caution is the political environment. Militias now rule the country.

Cuba: Tourism is a bright spot for Cuba, as is sugar manufacturing. If the US trade embargo is lifted, other types of manufacturing are a logical next step. Labor quality in Cuba is 40 percent to 60 percent of that in the US, but labor costs are 10 percent to 15 percent of American labor. There is a real possibility that Cuba could be added to the Central America Free Trade Agreement in the future.

Advantages to Nations with Young Populations

Editor’s Note: This article is excerpted from an April 28, 2015, presentation by Peter Zeihan, founder, Zeihan on Geopolitics, to a plenary session of the Industrial Asset Management Council’s Palm Desert, California, Professional Forum. The session was sponsored by Johnson Controls, Inc.

Shifting population demographics suggest a problematic economic future in many developed nations. The United States, however, looks like a bright spot.

One way to classify each country’s demographic groups is in a pyramid composed of three economically viable categories:

It is desirable to have a balance between the three demographic groups, since young workers’ consumption patterns drive economic growth, and mature workers supply capital. Different countries have different demographics and, therefore, economic profiles.

As American Baby Boomers (those born between 1946 and 1964) retire, wage inflation will occur. The Baby Boomers are the largest generation ever in the United States. When they entered the employment market en masse, they competed for jobs, which drove down wages.

This generation has been looking for safe savings instruments, and in some cases has invested overseas to find them. This has resulted in worldwide investment bubbles. When the Baby Boomers retire, wage inflation will occur as large numbers of jobs open up.

In 15 years, Generation Y (those born between 1982 and 2000) will contribute to America’s consumption-led economic growth. They are the second largest generation in U.S. history. Currently, they are experiencing the same type of downward wage pressures that Baby Boomers did decades ago. But as time passes, they will mature and contribute to consumption-led growth. 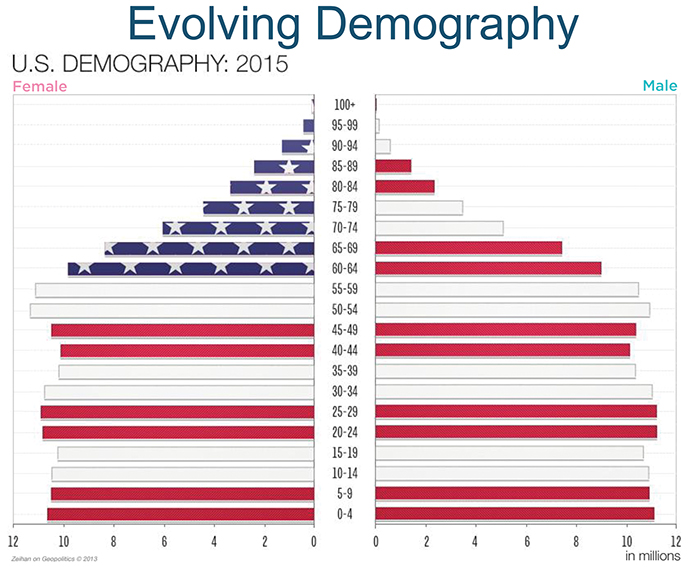 The European Union (EU) and Japan are unlikely to see consumption-led growth in the foreseeable future. Birth rates in these regions are so low that consumer consumption will not soon play a significant role in their economies. 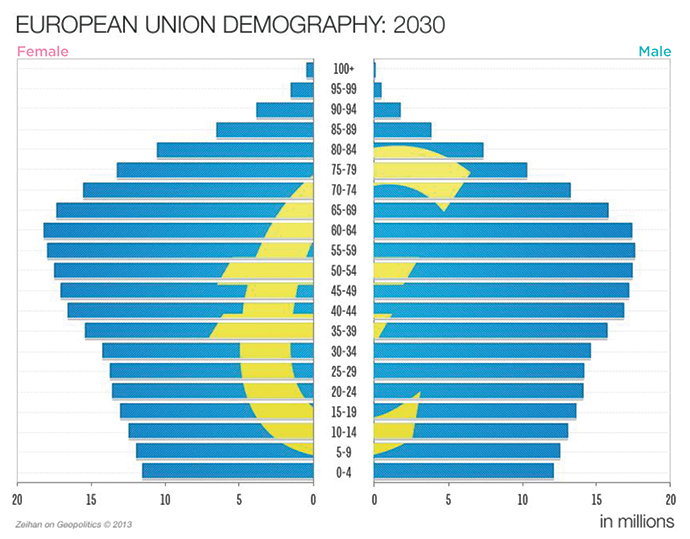 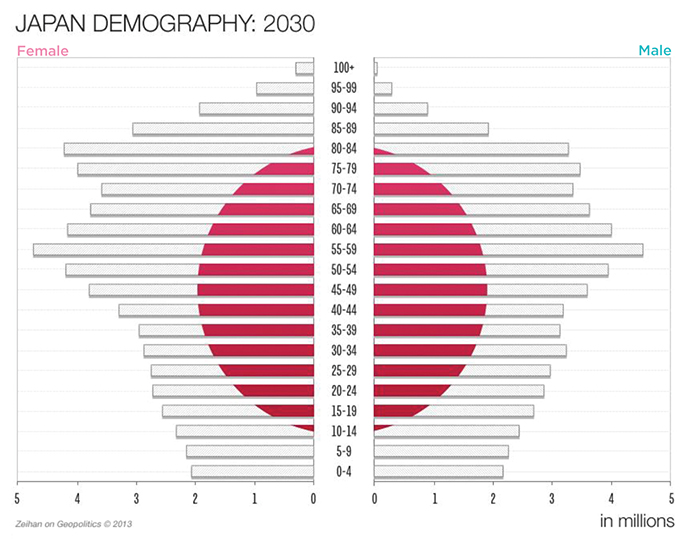