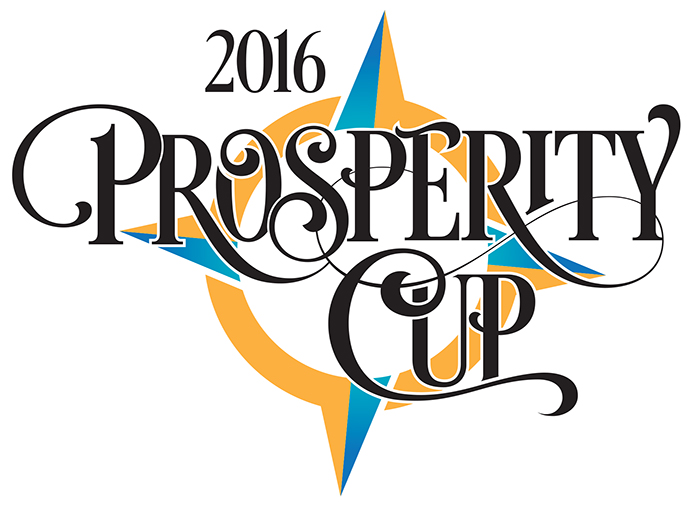 North Carolina and Texas grab hold of the first Prosperity Cup. They’re not likely to let go without a fight.

Ask any CEO or any athlete: The truest test of competitiveness is finding out how you respond to a challenge.

Today, Texas is confronting an energy sector downturn that has meant thousands of job losses, even as projects from so many other sectors keep landing there. In North Carolina, the downturn takes the form of a widely shared frown, as newly passed legislation many view as discriminatory to the LGBT community has caused major company project cancellations, event pullouts and boycotts of the state.

But if any territories are built to withstand such storms, these two are. In the analysis for Site Selection’s annual Prosperity Cup (formerly named the Competitiveness Award), Texas and North Carolina finish in a tie for No. 1, based on an index of 10 criteria that measure corporate project activity and business climate attractiveness.

What do both states’ economic development portfolios have in common? The same things any investment portfolio would: Breadth, depth and economic diversity.

“There’s a strong case here that because of the data saying North Carolina is a great place, its reputation is going to withstand the storm,” says Leonard Ponzi, managing partner of ReputationInc. and former managing partner of the Reputation Institute. (No, no relation to the infamous Charles Ponzi of the eponymous scheme, he says, acknowledging the irony of his chosen métier.) At the same time, it’s up to North Carolina to address the issues. “Stakeholders just want to have a clear position,” he says.

Site Selection Managing Editor Adam Bruns: Describe the level of concern, project delays and conversation that the social legislation has sparked with existing and prospect companies looking to grow in North Carolina. What are hearing from foreign company leaders in particular, and what are your team’s chief talking points in these conversations?

Secretary of Commerce John E. Skvarla, III: Any time the state is mentioned in national news stories where some issue is under debate, company executives are naturally curious, so the number of conversations we’ve had recently has increased due to the media attention. But maintaining dialogue with company leaders is something we do all of the time, sharing facts and explaining our programs and recent legislation. In this case, we’ve found company leaders really don’t know what’s in the law, only misunderstood bits and pieces they’ve seen in the media. I don’t find much difference between foreign and domestic leaders in this regard. 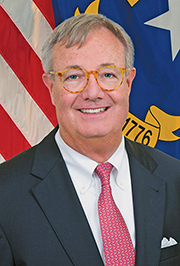 The key and most unrealized fact is that in North Carolina private companies can make any rules and accommodations that they deem appropriate for their organization. There is no over-reach by the state into their human resource functions. We also remind people of the long and successful track records of the companies that call North Carolina home, companies that have built their success in partnership with the warm and welcoming people of our state.

Bruns: When you speak to corporate leaders of companies that have recently announced projects, which factor do they most often cite as critical to their investment decision?

Skvarla: The key factor often comes down to North Carolina’s talented and skilled workers. Interestingly enough, in many ways it’s not just their specific skills, or the fact North Carolina workers have the nation’s best customized training programs to keep them sharp — it’s our can-do attitude that shines through. That’s an intangible companies notice about our workforce and mention often.”

Bruns: What do you view as the most innovative aspects of NC’s economic development portfolio today?

Skvarla: We have several innovative things underway that will make a real impact. To speed major site development for large industrial projects, we have reserved up to $35 million over the next three years to meet public infrastructure needs at qualifying locations, thanks to a collaboration between the GoldenLEAF Foundation and the Rural Infrastructure Authority, which is supported by my team at North Carolina Commerce.

Another initiative is our Innovation to Jobs program, which includes a Venture Multiplier fund of $40 million to support technology transfers. Finally, we’re fundamentally rethinking how we utilize the state’s assets to generate income, particularly our underutilized real estate assets. We call this Project Phoenix, and it will create thousands of construction, engineering, architecture, logistics and finance jobs over the coming years.

When viewed across the 10 criteria that determine the Prosperity Cup, Texas ranks No. 1 in four of them. But Texas and its communities would trade all those rankings for being No. 1 in your heart. If the talent likes it, somehow the rest just seems to flow into place.

This appears to be the case in booming Plano, where Toyota is consolidating 4,000 jobs from California, Kentucky and New York at its new headquarters. According to the Dallas Business Journal, at a recent North Dallas Chamber of Commerce event, Toyota North America CEO Jim Lentz said three-quarters of employees in those states are ready to make the move.

They’d be following a record tally, drawn in large part by record opportunities with growing employers. When the US Census Bureau released new metro-level population estimates in March 2016, the Texas trends — even in a state that loves living large — were astonishing:

Four Texas metro areas together added more people last year than any state in the country except for Texas as a whole. From July 1, 2014, to July 1, 2015, the Houston-The Woodlands-Sugar Land and Dallas-Fort Worth-Arlington metro areas added about 159,000 and 145,000 residents, respectively — the largest gains of any metro areas in the nation. Austin-Round Rock and San Antonio-New Braunfels were each also among the 16 nationwide to gain 50,000 or more people over the period. These four Texas metro areas collectively added about 412,000 people. Texas as a whole gained about 490,000.

Five Texas metros — Midland, Odessa, Austin, College Station-Bryan and Houston — were also among the 20 fastest growing between 2014 and 2015.

The other Prosperity Cup co-champion showed well too: State population estimates released in December revealed that North Carolina added more than 100,000 people during the last year to become the ninth state with 10 million or more people. Greater Raleigh was the 16th fastest-growing metro area in the US, and Greater Charlotte was the 17th largest numeric-gaining metro area. Together, these two metro areas grew by about 78,000 people. Such growth bodes well for multiple site selection factors: See Performance Food Group’s just-announced expansion in Temple, Texas, motivated in part by its “growing customer base.” See Lonza’s new biotech investment in the Houston-area city of Pearland, where the Lower Kirby District is setting up as a healthcare hub. And see the just-announced location in Waco of Polyglass U.S.A.’s fifth US plant, a $19-million, 45-job investment to make roofing materials — perhaps destined for some of the new Texas buildings.

Working on a Building

But wait, you ask, weren’t those population numbers a bit pumped up by the energy boom that just crashed? 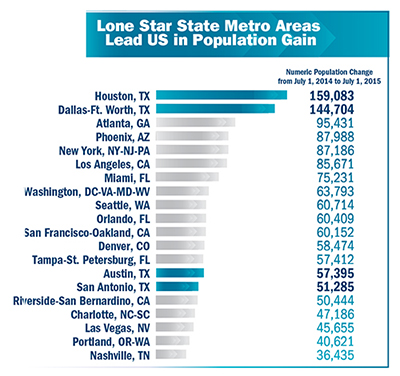 To a certain extent, yes. But here’s the kicker: People stay.

That trend is certainly alive and well in Corpus Christi, part of a 12-county region that’s seen between $35 billion and $40 billion in project investments. “Folks are getting laid off in oil services and getting jobs in the construction sector,” says Iain Vasey, president and CEO of the Corpus Christi Regional Economic Development Corporation.

They will find plenty of work in the area, as the Cheniere LNG liquefaction complex continues apace, Italy’s M&G Chemicals pursues construction of the world’s largest PTA/PET plant, and the $1.3-billion seamless pipe mill from Chinese-backed TPCO Americas nears completion. About 1,000 workers were on site early this spring at the Cheniere site, and another 1,000 were working at the hot briquetted iron plant being built by Voestalpine.

“The HR director for M&G Plastics tells me people are being laid off on a Friday” in the oil regions, says Vasey, “and by Monday and Tuesday mornings, people are going through their HR office.” M&G is on track to hire 800 to 900 people.

“People are moving to Texas more than any other state in the US because Texas is the land of opportunity.”
— Texas Governor Greg Abbott, April 6, 2016, in remarks to the World Travel and Tourism Council Global Summit in Dallas

The area is also well positioned to participate in another trend supporting Texas prosperity: boom times in Mexico, driven in part by energy. When you come right down to it, the energy economy in Texas is just as internally diverse as the state’s overall economy.

“We really want to be the energy port of North America,” says Jarl Pedersen, an experienced global energy executive who serves as chief commercial officer for the Port of Corpus Christi. It was from that port that the first US oil export in 30 years departed on December 31, 2015. Overall, the port has played a big part in the shale boom: It sent out 200,000 barrels in 2011. Early this year, it was sending out 600,000 barrels per day. And even as outbound shipments taper off a bit, they’re offset in part by the import of wind turbine components.

In both Texas and North Carolina, it seems, hiccups don’t mean you stop breathing. And they haven’t stopped individuals, companies and entirely new industries from voting with their feet.

Joined at the Hip

The 2016 Prosperity Cup is awarded to co-champions the North Carolina Department of Commerce and the Economic Development & Tourism Division of the Governor’s Office in Texas. But these two organizations have more in common than a trophy. Each state is also home to a trophy asset: a non-profit partner that works with the state agency to market and promote the state. It’s a structure more and more states are beginning to pursue — Florida being the latest example — because it seems to work so well.

TexasOne is a marketing program of the Texas Economic Development Corp. supported by economic development agencies and corporations throughout Texas. Team Texas is a non-profit membership association which has served as an outreach program of the Texas Economic Development Council for more than 25 years. The Economic Development Partnership of North Carolina, led by a 17-member board of business leaders and supported financially by the private sector, operates under contract with the North Carolina Department of Commerce, focused on business recruitment and retention, export assistance, small business support and tourism.