In Utah it’s hard to know which comes first, the optimism or the jobs. 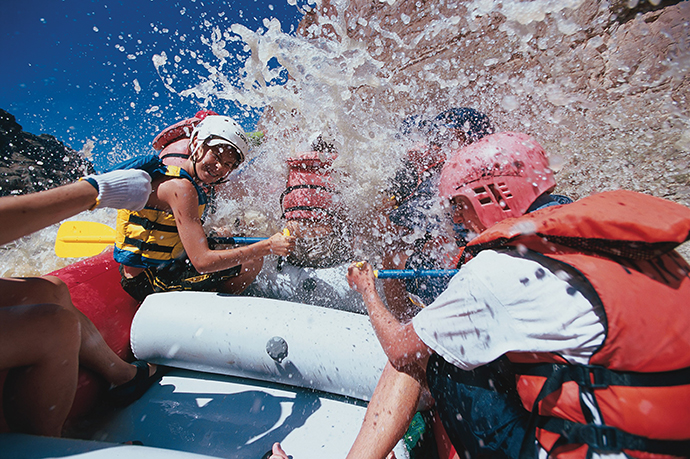 Whitewater rafters in Moab. Leisure and Hospitality is one of several industries in Utah experiencing significant job growth.
Photo courtesy of Visit Utah
by PATTY RASMUSSEN

Utahns have a reputation for being optimistic. It could be explained by a confident attitude about the economy. A Gallup poll released in February 2016 found Utah residents are the most positive in the US about their state’s economy. According to the poll, Utah sits firmly atop the Economic Confidence Index, a measure of economic conditions and outlook, with 84 percent of residents describing state economic conditions as “excellent/good” and 83 percent viewing the economy as “getting better.” The results are based on a 50-state poll, conducted by Gallup from March 30 to Dec. 22, 2015. The state scored a +75 out of 100, 11 points higher than second place North Dakota.

Turns out there are even more statistical reasons for optimism. The state recorded a 3.4-percent unemployment rate in February, more than a point lower than the national average. “The labor market in our state continues to grow and support economic prosperity,” said Carrie Mayne, chief economist at Utah’s Department of Workforce Services. “With the addition of more than 44,000 jobs, Utah’s businesses continue to provide opportunity for job seekers who have the skills needed in today’s labor markets.”

The state touts its highly educated and well-trained workforce, and is energetically encouraging that workforce through substantial investments in STEM education for K-12 education as well as focusing attention on certificate acquisition through community colleges and traditional four-year colleges and universities. Utah’s efforts have not gone unnoticed. Existing industries and companies new to the state routinely cite the workforce as a top reason for their investment. The past year has brought sizeable investment and job creation to the Beehive State, and not just in cities. Companies are choosing to locate in more rural locations, bringing with them hundreds of jobs in the process.

Making Themselves at Home

One of the top job creation expansions in the past 12 months came from EMC Corporation, a leading provider of cloud computing. The company announced it will invest $62 million in its “Center of Excellence” located in Draper. EMC also plans to add jobs to Utah’s booming tech sector by creating 700 new jobs in the next 10 years.

“We are extremely pleased with the progress the company has seen during the last several years and the strong partnership we have formed with both community and government leaders,” said Vance Checketts, vice president and general manager of EMC’s Utah operations. “EMC prides itself on being an employer of choice, not only globally, but locally as well, and it was an honor to be recognized by Utah Business Magazine as a ‘Best Large Company to Work For.’ ”

Procter & Gamble (P&G) was another big job creator in Utah in 2015. As part of P&G’s overall strategy to revamp factory operations in the North American sector, the company announced last May that it was expanding its paper products factory in Bear River City, north of Ogden. The expansion includes a $500-million investment that will double the existing facility to close to 1.2 million sq. ft. (111,485 sq. m.) and create 200 new jobs over the next 20 years. Yannis Skoufalos, P&G’s Global Product Supply Officer, called the move “a strategic part of P&G’s North American supply network redesign.”

A Honey of an Investment

A more recent expansion comes from Honeyville, Inc., a local, family-owned food products company that is growing its manufacturing facility in Honeyville, north of Ogden. The company announced a $23-million investment in February 2016. The expansion will generate 115 new jobs. Honeyville specializes in private label co-packing, mixing and blending, grain milling, heat treatment, wholesale ingredient distribution and consumer products, and was founded in Parowan, Utah, in 1951. It has locations in Arizona, California and Ohio, so expansion in Utah wasn’t a given.

“Honeyville has experienced significant growth, and after careful consideration found Utah to be the ideal state for expanding operations,” said Ed Hemphill, Honeyville’s president. “Utah has an outstanding workforce, has established a balanced regulatory environment and is a great location for employees to thrive and enjoy a high quality of life. Utah is also an excellent location to effectively serve several western states.”

Utah’s industrial and business diversity have certainly played a key role in the state’s growth coming out of the Great Recession. With jobs on the rise in several private-sector industries — including Education and Health Services (9,700 jobs); Trade, Transportation and Utilities (8,700 jobs) and Leisure and Hospitality (8,300 jobs) — there’s no doubt Utahns will maintain that trademark optimism.


Roll to the Middle

Looking for a nice middle-class life? Utah is your best bet, according to research and analysis from the Brookings Institution. To be even more specific, three Utah metros — Ogden-Clearfield, Provo-Orem and Salt Lake City — had the highest percentage of middle-class households in the US. The findings are a result of a combination of data from the Pew Research Center report, “The American Middle Class is Losing Ground,” and from the American Community Survey (ACS), an ongoing statistical survey compiled by the US Census Bureau.

Richard V. Reeves is a senior fellow in Economic Studies, co-director of the Center on Children and Families, and editor-in-chief of Brookings’ Social Mobility Memos blog. Reeves, along with research assistant Edward Rodrigue, examined the findings of the Pew report. Authors of the Pew report defined middle-class households as “those earning between two-thirds and two-times the American median income, adjusted for household size.”

Reeves and Rodrigue took the Pew definition and applied it to the ACS. “The results aren’t exactly comparable,” wrote Reeves. “Pew used the 2015 Current Population Survey Annual Social and Economic Supplement, which is conducted in March and asks people about their market income in the past 12 months; we use the 2014 ACS, which is conducted throughout the year and asks a similar question. But we use the same definition of the middle-class. In the 2014 ACS, we found that roughly 30 percent of households were upper income, 48 percent were middle income, and 22 percent were lower income.”

According to the definitions and combined data, the three Utah metros were found to have the largest middle class:

The same three metros in Utah also ranked highest in income equality. While there are slightly higher numbers of lower-income households than upper-income households, the largest percentage — by a wide margin — are in the middle-income range.