Ready to celebrate that climbing FDI number? Don’t put on your party hat just yet. 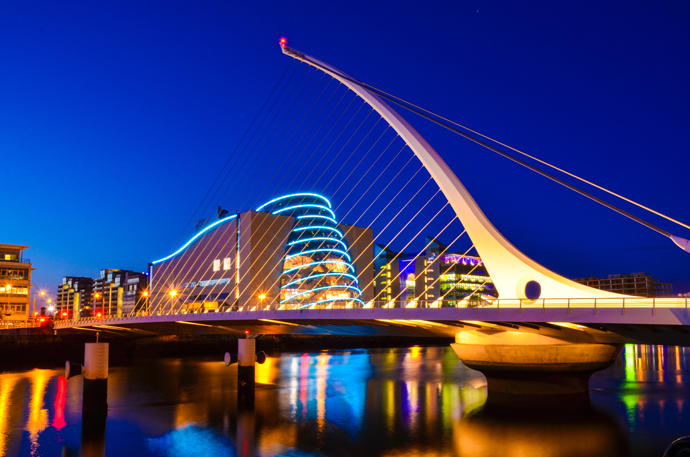 Samuel Beckett, whose namesake bridge in Dublin is pictured here, might have appreciated the absurdity of Irish GDP rising by 26.3 percent between 2014 and 2015, largely because of corporate headquarters inversions.
Photo courtesy of Getty Images
by ADAM BRUNS

The US Department of Commerce’s SelectUSA and the Bureau of Economic Analysis staged a conference call in early 2016 to explain the latest data on foreign direct investment into the United States, and to tout some robust numbers: In 2014, new FDI expenditures made by foreign investors acquiring, establishing, and expanding US businesses totaled $241.3 billion, while greenfield investments accounted for seven percent of that total, exceeding $16.5 billion.

My first question on the conference call came from their November 2015 release of FDI data, which stated that corporate inversions (the trend of letting your company be acquired so you can move your HQ to a more tax-friendly domicile, often Ireland) technically count as FDI. I asked what proportion of the latest FDI figures (which count M&A) included corporate inversions. They said it was a big chunk.

So the big numbers and brag points about amazing increases in FDI are maybe not so thrilling after all.

“I agree that BEA’s lack of data sufficient to identify inversions has rendered the Irish FDI data useless,” says John Gornall, a partner in the economic development practice at law firm Arnall Golden Gregory who as a special assistant attorney general in 2008 helped negotiate the location of Kia’s $1.2-billion plant in Georgia. “I also agree the inclusions of inversions in the FDI data has greatly inflated the overall annual FDI investment numbers.”

Moreover, a bunch of states have their FDI data suppressed. “Why?” I asked the federal officials, since we all know about big projects in those states.

It turns out that BEA tracking of FDI is based on a company filling out a form once federal staff have learned of the project and reached out to the company. But, they say, if there are few enough FDI transactions, the data could possibly be reverse-engineered (a fancy phrase for “figuring something out”) and the companies’ identities revealed.

So instead they suppress the data completely, even as they clamor for better sources and more data. Whether you’re seeking accurate data or seeking the FDI itself, it’s catch as catch can.

In July 2016, a BEA update on FDI reported that expenditures by foreign direct investors to acquire, establish, or expand US businesses totaled $420.7 billion in 2015, an increase of 68 percent from 2014. “Total planned greenfield expenditures for investment initiated in 2015, which include both first-year expenditures and planned spending in other years, totaled $31.2 billion,” said the update, which also stated the following (italics added): BEA’s direct investment surveys do not collect information on whether a US corporation became foreign owned as a result of a corporate inversion; hence these transactions cannot be separately identified in the statistics based on the survey data alone.

Using publicly available information, such as commercial databases and press reports, BEA estimates that newly inverted US corporations account for approximately 20 percent of first-year expenditures for acquisitions in 2015.”

Since the BEA doesn’t ask the question in its current survey, I asked, might it consider doing so in the future?

BEA estimates that newly inverted US corporations account for approximately 20 percent of first-year FDI expenditures for acquisitions in 2015.

“BEA is exploring ways to identify inversions, such as adding inversion-related questions to its data collection instruments or using outside sources, so that users can identify the impact of these transactions on the statistics,” said Amanda Budny, whose job title, through no fault of her own, is nearly as long as her answer: Chief, New Foreign Investment Section, Direct Transactions and Positions Branch, Direct Investment Division, Bureau of Economic Analysis, U.S. Department of Commerce.

The BEA also has been unable to track so-called second-round inversions, when an inverted US corporation directly or indirectly acquires additional US businesses: “The US targets of these second round acquisitions might also be considered inverted US corporations, but these transactions cannot be readily disentangled from other changes in the consolidated US operations of the foreign parent. Therefore, BEA has not attempted to identify the impact of these second-round inversions on the statistics.”

However, some impacts have been clearly tracked: “By country of ultimate beneficial owner (UBO), the largest source country was Ireland, at $176.5 billion.”

No Country Is an Island — Unless It Is

Tax-avoiding inversions, notes the newly released JLL Life Sciences Outlook report (citing Deloitte), have “resulted in pharmaceutical and biotech companies churning $520 billion worth of transactions,” including Medtronic’s $50-billion acquisition of Ireland-based Covidien in January 2015. The US Treasury Department is taking steps to curb such inversions following a proposed $160-billion merger between Pfizer and Allergan.

The US is not alone in re-examining the nature of the inversion phenomenon, which began in earnest in 2008. In July 2015, Ireland’s Central Statistics Office (CSO) reported that, largely due to such headquarters inversions (with an assist from aircraft imports for international leasing purposes), not only had Ireland’s outward FDI position globally risen sharply, but the moves had raised the island nation’s GDP by 26.3 percent between 2014 and 2015.

As in the US, some details were suppressed. Criticism and debate were not, however, spurring Pádraig Dalton, director general of the CSO, to issue a statement addressing the core issue at hand in Ireland, which has what he called a small, open and highly globalized economy — perhaps the most globalized in the world.” GDP and GNP, although required internationally, “no longer provide a sufficient understanding of the domestic economy, and we need to supplement these internationally agreed indicators with a broader suite of indicators that can provide the necessary insights,” he said. A report on the topic is due late this year.

Back stateside, the largest FDI expenditures by state in 2015 — $119 billion, or 28 percent of the total — were for investments in California. New York attracted the most expenditures for greenfield investment, at $4 billion.

According to the 2016 IBM Global Location Trends report, Chicago was the No. 1 US metro for FDI, the only North American metro area in the world’s Top 20, and seventh globally. The Chicago metro area saw more FDI projects than the next three highest cities: Montreal, Miami and Atlanta.

A release from the office of Chicago Mayor Rahm Emanuel noted, “Chicago is home to more than 1,800 foreign-based companies, accounting for more than $100 billion in foreign direct investment. World Business Chicago continuously works to increase foreign direct investment with initiatives including its Gateway Cities agreement with eight Chinese cities and its Global Cities Economic Partnership with Mexico City.”

But it’s Chinese firms that are making the most headway. “Chinese firms invested $8.3 billion in 1Q and $10.1 billion in 2Q 2016, bringing the total value of Chinese FDI in the United States in the first half of 2016 to $18.4 billion,” Rhodium Group reported in July, a figure nearly three times what Rhodium recorded during 1H 2015.

“Pending investment in greenfield projects add up to $9.5 billion, mostly driven by real estate developments in New York and California,” Rhodium reported, “but also projects in automotive (such as Yanfeng’s plants in Tennessee and South Carolina or Faraday Future’s expansions in California and Nevada) and materials (Jushi’s glass plant in South Carolina and Sun Paper’s paper mill in Arkansas).”

Before Sun is even coming up in Arkansas, however, more Chinese investment is headed to the Natural State: Governor Asa Hutchinson announced October 20th during a trade mission to China the signing of an MOU with Suzhou Tianyuan Garments Company, which will create 400 jobs and invest $20 million in Little Rock.