Where the Action Is

The German cities receiving the most attention from corporate investors include trivago’s hometown of Düsseldorf. 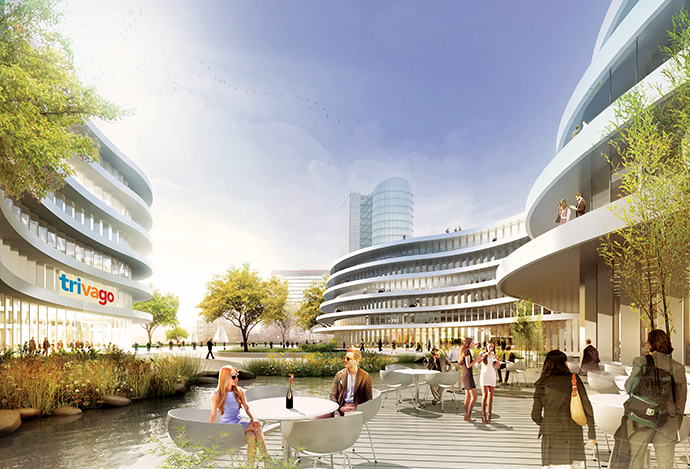 Since the start of 2015, the cities of Hamburg, Berlin, Munich and Düsseldorf, in that order, lead the way among German cities receiving the highest number of corporate facility investments. The projects landing in those cities are led by such familiar names as Lufthansa and Siemens in Munich; Kuehne + Nagel and Hapag-Lloyd in Hamburg; Allianz and Dachser in Berlin; and logistics leaders DHL and BLG in Dusseldorf.

But one corporate headquarters stands out above the rest.

Since its founding in Germany a decade ago, hotel search firm trivago has expanded to over 55 markets and grown turnover to over $500 million and market revenue to $4.5 billion as recently as 2015. The company’s Web tools see more than 120 million visitors per month. And its payroll features more than 1,000 employees from 70 nations — up from just 40 employees six years ago and 450 in 2014.

So it’s no wonder the company needs a new headquarters as cool as its various offices sprinkled across the globe in places such as Helsinki, Barcelona, Madrid and New York City.

“We thought about moving people into the basement, but decided that building a campus might be a slightly better idea.”
— trivago Founder & Managing Director Rolf Schrömgens

In September, officials laid the first stone for trivago’s new corporate campus in the city’s Medienhafen district (“media harbor”). It will have approximately 26,000 sq. m. (280,000 sq. ft.) of office space after the €145-million first phase of construction is complete on the six-story complex in mid-2018.

“We are very grateful to both the city of Düsseldorf and IMMOFINANZ, for helping us to realize our dreams, in the city that trivago has always called home,” said Peter Vinnemeier, founder and CTO of trivago. “From our first office in Flingern-Süd, to our most recent spot in Golzheim along the Rhein — we are looking forward to exploring Düsseldorf’s Medienhafen next, and all it has to offer. This is an exciting, and undoubtedly historic, moment for all of us at trivago.”

The new campus will sit on the docks of Kesselstraße in the Dusseldorf Media Harbor, close to the “New Zollhof” buildings designed by Frank Gehry. It will be easily accessible by tram and by bike (less than 10 percent of trivago associates commute by car), with 570 underground parking spaces and 160 bicycle stands on the planned LEED-Gold campus.

As the company explained in a February 2016 release, “With 222-percent growth since 2012, the multinational team of 950 needs room to grow.” It’s still growing by more than 58 percent year over year. “We thought about moving people into the basement, but decided that building a campus might be a slightly better idea,” joked trivago Founder and Managing Director Rolf Schrömgens.

As with the current headquarters, the new campus will include creatively-themed rooms and kitchens, and will continue to offer trivago sponsored activities such as bouldering, krav maga and aerial yoga. (Presumably, insurance plans can be had from Allianz, building its own new three-building headquarters campus in Greater Berlin.) 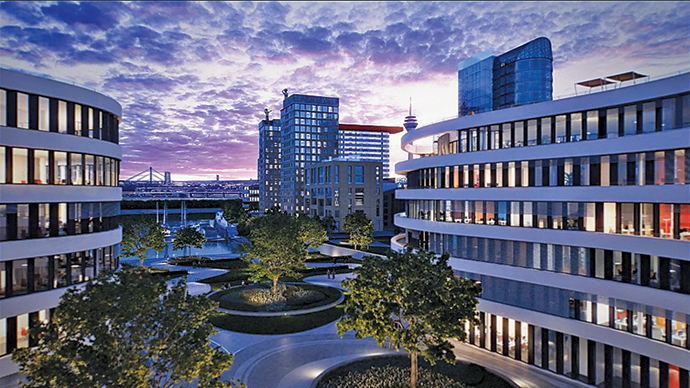 “The trivago headquarters is a landmark project for IMMOFINANZ,” said Oliver Schumy, CEO of IMMOFINANZ. “Not only does it fulfill the requirements of a new-generation office, it is also important to us that the architecture and design reflects trivago’s innovative company culture.” The firm also is developing FLOAT, a new corporate headquarters for Uniper, in the same Medienhafen neighborhood.

Düsseldorf placed sixth in the world in Mercer Consultancy’s Quality of Living Rankings in 2015. As in the new Hafen City district in Hamburg, the sense of hafen, or harbor, goes beyond just a cute name for a business district, and relates directly to the area’s history and layout.

“Since access to the harbor will remain open to the public, Düsseldorf’s residents will also benefit from the new trivago campus,” said Lord Mayor Geisel. “The new headquarters will become another highlight among the many buildings that give the Medienhafen its unique appearance, and has made the area well-known beyond the city’s borders.”

“Our goal is to attract the best talent from all over the world,” said Sydney Burdick, trivago global corporate communications, last February. “Many people are puzzled when they realize that we have nearly our entire global team sitting in one place; but by bringing everyone together, we have seen that co-working and collaborating on a daily basis is fundamental to building mutual trust. It enforces an exchange of information, accelerates action being taken and speeds up learning.”