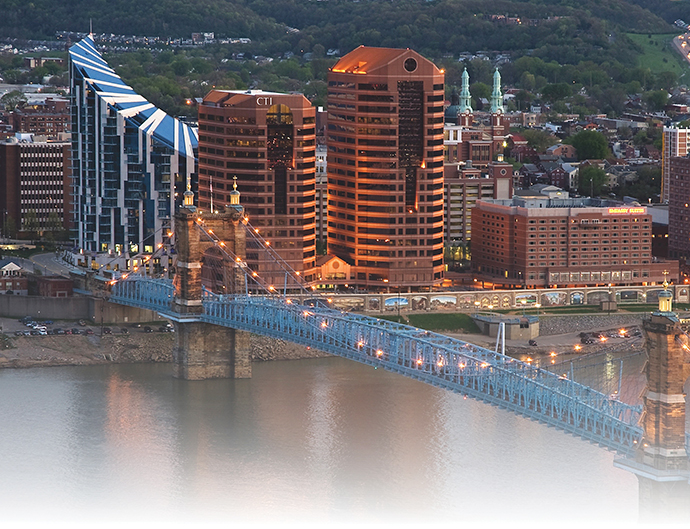 CTI Clinical Trial and Consulting Services is moving its HQ from Cincinnati to the RiverCenter complex in Covington, Kentucky, across the Ohio River.
Photo courtesy of CTI
by ADAM BRUNS

With a healthy contribution from its Kentucky-side stakeholders, Greater Cincinnati led all metro areas along the Ohio River in corporate facility investment over the past year.

That is the chief finding of Site Selection’s annual analysis of project activity in every county along the entire length of the Ohio River. The Queen City’s project total of 132 nearly equaled the totals of second-place Louisville and third-place Pittsburgh put together. Metro Owensboro, Kentucky, Kentucky placed fourth, and Metro Evansville-Henderson, Indiana-Kentucky placed fifth.

Regional economic development is led by the Regional Economic Development Initiative (REDI) Cincinnati, whose newsroom is replete with announcements of new corporate investment throughout a tri-state region that works together to cultivate economic growth. But sometimes growing pains and awkwardness go hand in hand.

It’s also that rare occasion afforded by state-line river cities when a site in another state is actually closer to a city’s thriving city center.

“The local amenities including the Northern Kentucky Convention Center, the Riverfront Commons Park and the adjacent hotels are important attributes for retention and recruitment of CTI team members,” said Timothy J. Schroeder, CTI founder and CEO. 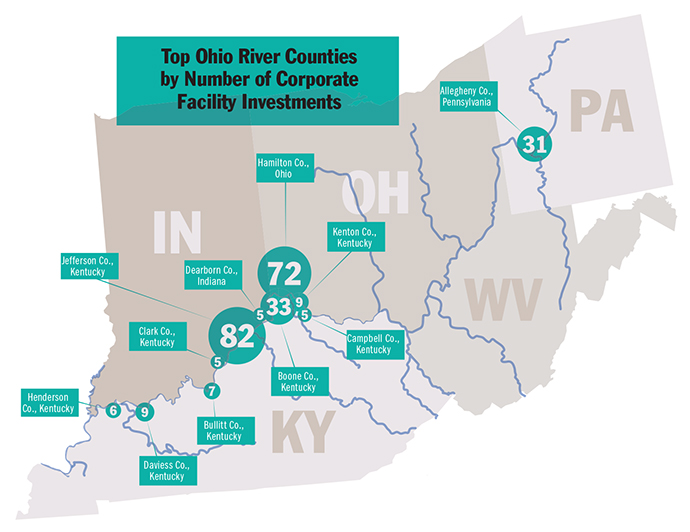 The RiverCenter complex was developed by Northern Kentucky–based development powerhouse Corporex, whose CEO William Butler, a University of Cincinnati graduate and longtime Greater Cincinnati civic booster, said, “CTI’s move to the urban core follows a national trend and will be a benefit to the entire community.”

Asked about the company’s consolidation process, Allison L. Schroeder, Timothy Schroeder’s daughter and the company’s manager of marketing and corporate communication, says, “We currently have four locations in Greater Cincinnati that we are consolidating to two — the Covington location, and we are maintaining our presence at University Station at Xavier University, which is a part of Norwood [Ohio].”

The cost savings numbers are a little more difficult to figure at this stage, she says, “because, while we are losing some overhead costs with multiple locations, we are moving into a larger facility with improved technology, which is obviously an expense. The State of Kentucky, the City of Covington, and Corporex have all been very generous with incentives that make moving to the area very appealing. The major benefit is having employees centralized into one location, which will help with communication and productivity ... We will also have improved efficiencies being near the Cincinnati Northern Kentucky Airport, as many of our employees travel on a regular basis.”

CTI has associates in more than 25 countries and has worked on over 2,700 projects across six continents.

The Kentucky Economic Development Finance Authority preliminarily approved CTI for tax incentives up to $14 million. The 500 jobs would be added over the agreement’s 10-year span at an average of $40 per hour including benefits.

Schroeder says about 25 percent of the company’s Greater Cincinnati employees are based in Kentucky, with less than 5 percent in Indiana and the rest located throughout Cincinnati and its Ohio suburbs.

“We have not yet seen negative impact for the Ohio-resident employees that will be moving, as the company has been very understanding of the impact this move has on our current staff and is working to make the transition as painless as possible,” she says. “Our goal is to continue to recruit the best talent in the region, no matter where they are located. We’re confident that our growth across the region will naturally lead to an increase in Kentucky-based residents.”

CTI will continue to work with Xavier University, the University of Cincinnati and Cincinnati Children’s Hospital, among others. “As we continue to expand the company presence in the tri-state area, we hope to become a model for other companies, in growing our footprint throughout this incredibly rich region,” said Timothy Schroeder.

Business partnerships figure into the mix too: Among the company’s customers is Covington-based Bexion Pharmaceuticals, which got its start in Covington’s bioLOGIC life sciences accelerator, a for-profit entity which itself jumped across the river in 2008 after launching in Ohio as the not-for-profit BioStart (now defunct).

But Bexion’s own bi-state value was evident in September when the company announced the first dosing of a patient in a Phase I trial. The treatment took place at the University of Cincinnati Cancer Institute on the Ohio side.

“With the discussions surrounding the proposed Appalachian (Ethane) Storage Hub, a $10-billion project, we would anticipate that this area may see more than just one or two cracker facilities,” Custer writes in an email. “This changes the whole dynamic of the area from the ‘rust belt’ to the ‘plastic belt.’ The amount of money that will be necessary for construction and infrastructure as well as the number of jobs that will be available from construction to potential manufacturing is incredible.”

Custer says he is fielding calls from across North America from manufacturers getting a feel for available facilities, acreage and labor. “We have a couple companies preparing to commit to the area as I write this,” he says. Meanwhile, Marathon Petroleum announced it’s now moving product through the Cornerstone pipeline. “All this talk of drilling and pipelines is great,” Custer writes, “but the real story is crackers and plastics ... This will impact the entire Ohio River corridor unlike anything that we have ever seen before.”