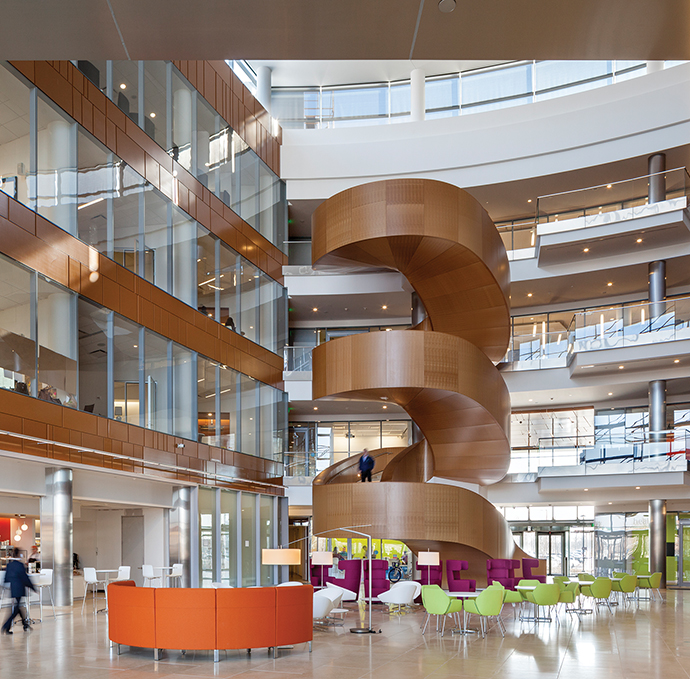 The Navy Yard in Philadelphia has a new lease on life, and the life sciences are a big reason why.

Philadelphia is not only the first capital of the United States — where the founding fathers signed the Declaration of Independence and crafted the United States Constitution — but also home to the country’s early robust naval defense infrastructure.

Over the next 200 years, the U.S. Navy developed and implemented its national defense intelligence strategy, and built and repaired scores of state-of-the-arts ships here. Beginning in 1996, the historic Philadelphia Naval Shipyard complex began a transformative rebirth and has re-emerged as The Navy Yard. The facility Politico magazine recently called “The Coolest Shipyard in America” is an award-winning magnet for new businesses, employment, and investment that global companies large and small now call home.

The R&D heritage of The Navy Yard continues across a portfolio of companies and industries, including defense, energy and materials. That heritage also applies to a life sciences cluster of companies that includes the institutions (University of Pennsylvania, Vincera Institute), and capital (Phoenix IP Ventures, Ben Franklin Technology Partners) to support them.

That’s no small goal. But there’s no reason to think small in a metro area that’s been known for its healthcare and life sciences innovation nearly as long as it’s been known as a cradle of democracy.

As a city and region of “firsts” — the first hospital, medical school, and pharmacy school, the first separation of Siamese twins, and, more recently, the first pediatric double-hand transplant — it’s only natural that The Navy Yard is now emerging as the East Coast epicenter for life sciences R&D. And at the core of that healthcare clustering is GlaxoSmithKline (GSK), one of the first global companies to locate its North American operations at The Navy Yard.

Ray Milora is the kind of guy who can appreciate heritage and modernity simultaneously. The global head of design and change management for GSK’s Worldwide Real Estate & Facilities team, he rebuilds old houses, hones his historical preservation credentials and recently co-founded an up-cycled homegoods company called Salvage & Craft. He says The Navy Yard’s location and amenities are “a great fit for GSK.”

He thinks they could be a great fit for plenty of companies.

“The Navy Yard is an incredibly vibrant area with a ton of growth potential,” Milora says. “The recent additions of the central green space, the architecturally diverse spaces (new and old) and the location itself provide the perfect foundation for a live-work-play community. The Navy Yard should be on anyone’s list when considering options to locate, grow and thrive in Philadelphia.” 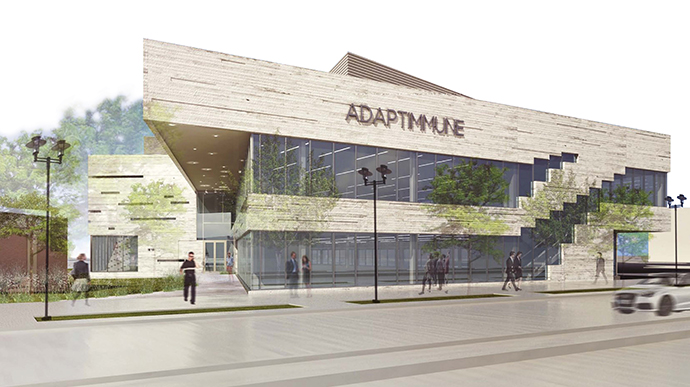 Adaptimmune’s name and headquarters design both resonate with the renewed spirit and open neighborhood environment of The Navy Yard.
Rendering courtesy of Adaptimmune

The region is also eminently affordable. Compared to the national average major-market rent for lab space of $24.30 per sq. ft., Greater Philadelphia’s average rate of $13.80 is exceptionally favorable, according to JLL’s most recent US life sciences report. Philadelphia also appears regularly among the top five US metro markets for life sciences venture capital deals as tracked by the MoneyTree™ Report from PricewaterhouseCoopers (PwC) LLP and the National Venture Capital Association.

Matt Szuhaj, managing director at Deloitte Consulting, has first-hand experience with The Navy Yard for life sciences clients. “I found it to be an interesting option,” he says, “as it presents a unique sense of place that is proximate to area attributes such as universities, hospitals and highways.”

As amenities fill in at The Navy Yard, they’ll be filling up with employees from other growing companies such as Adaptimmune, Iroko Pharmaceuticals and Wuxi AppTec.

Adaptimmune, focused on the use of T-cell therapy to treat cancer and a longtime research partner of the University of Pennsylvania, is now building its new US headquarters and clinical operations at The Navy Yard, where it will welcome 110 new employees from what CEO James Noble called the region’s “rich pool of scientific and clinical talent.”

China-based WuXi AppTec celebrated the grand opening of its new 150,000-sq.-ft. biomanufacturing facility at The Navy Yard in early October 2016. When fully configured, the facility could employ an additional 200 manufacturing and support staff.

The Science of Sustainability

Mark Seltzer, vice president, development and leasing for Liberty Property Trust (The Navy Yard’s co-developer with Synterra Partners) says life sciences is just the next phase of an innovation tradition that began long ago.

“It’s an organically formed story, with the asset being the real estate three miles from center city, and five minutes from an international airport,” he says, which among other things allows certain companies to ship cell therapies quickly. New transit options and the new 1200 Intrepid building and Central Green are creating space for more people while treating that growing population to the amenities they deserve — the science of life, you might say. But Seltzer says the science of real estate plays a part too: “We didn’t build 1200 Intrepid because of the life sciences — it was a reaction to being close to zero vacancy.”

“The Navy Yard is one of the nation’s most vibrant and progressive business locations,” she said when the new park earned its most recent accolades, “and Central Green is the perfect sustainable amenity to match the active workplace activities that surround it.”