Plugging in From the Desert:

If the social media landscape sometimes seems like a desert, the opposite can also be true: The desert can be the ideal landscape for social media company operations … especially those with an eye toward the whole world.

At least that’s proving true for Facebook, whose data center leaders broke ground in October for a new data center complex in Los Lunas, New Mexico, that could comprise up to six buildings, each of which carries a $250-million price tag.

Announcing the project on … where else … Facebook, Ken Patchett, the company’s director of data center operations for the West region, said the site would add to the company’s data center infrastructure at sites in Prineville, Oregon; Forest City, North Carolina; Lulea, Sweden; Altoona, Pennsylvania; Fort Worth, Texas, and Clonee, Ireland.

“In our search, we look for great partnerships with the local community, a strong pool of local talent for construction and long-term operations staff, and access to clean and renewable energy,” wrote Patchett. “We found all of this in Los Lunas, and we’re excited to join the community there.” West Jordan, Utah, competed for the project and offered $240 million in incentives, but withdrew from the data center derby after negative public feedback over the subsidies.

In these pages in September 2015, Rachel Peterson, Facebook’s director of data center strategic engineering, walked through the company’s due diligence process for new US data center sites. Asked for similar details about the New Mexico project, Lindsay Amos of the Facebook communications team says, well, the details are similar: “The site selection process is the same from site to site,” she says.

Peterson last year told Site Selection that the team starts with all 50 states and then works through a sequence of criteria that evaluates overall costs (including power); availability of clean, renewable energy; accessibility; construction and operations labor availability; temperature and humidity; and natural disaster risk. Because of the intensive design of Facebook’s facilities, she said, the company is able to site them in hot and humid locations.

Difficulty in finding renewable energy was one reason Facebook declined to go to one location and chose AllianceTexas in Fort Worth last year. (Another was the deregulated energy market in Texas.) But clean energy won’t be an issue in New Mexico, thanks to a plan to power the complex by 100-percent renewable energy through an arrangement with PNM Resources to bring new solar and wind energy onto the New Mexico grid.

“By powering our data center with renewable energy versus natural gas, we also reduce the water usage associated with the data center by 30 percent,” wrote Patchett. The New Mexico Public Regulation Commission in August approved the plan, which offers Facebook a 10-year fixed rate in exchange for $31 million a year in revenue to PNM from Facebook.

In July, Facebook announced another milestone, only this one took place at Yuma Proving Ground in the neighboring state of Arizona.

That’s where the company conducted the first full-scale test flight of Aquila, a high-altitude solar-powered unmanned aircraft designed to bring affordable Internet access to people in remote locations around the world. Not only do 4 billion people (60 percent of the world population) still not have Internet access, but about 1.6 billion are in locations where mobile broadband networks simply don’t exist. 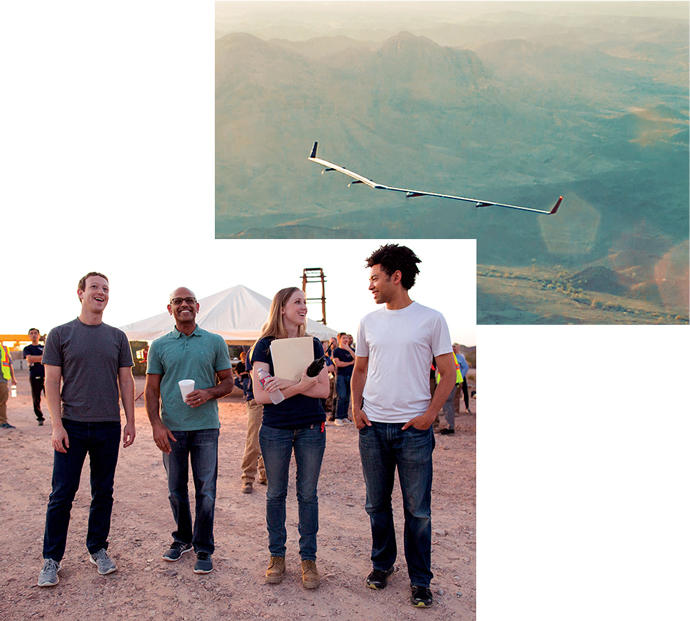 Facebook founder Mark Zuckerberg was on hand with colleagues as Aquila’s first full-scale functional check flight happened on June 28, 2016, at the Yuma Proving Ground (YPG), a US Army base in Yuma, Arizona.
Photos courtesy of Facebook

Aquila is part of a larger company effort called Facebook Connectivity Lab, whose team members are working on a variety of technologies and systems to solve the problem, including satellites. This satellite just happens to still be within Earth’s atmosphere.

“When complete, Aquila will be able to circle a region up to 60 miles in diameter, beaming connectivity down from an altitude of more than 60,000 feet using laser communications and millimeter wave systems,” wrote Jay Parikh, Facebook’s global head of engineering and infrastructure.

When JLL issued its latest Life Sciences Outlook report this fall, no cities in the US Southwest were among the top 16 clusters examined. So for now it will just stay Dexcom’s little secret.

The San Diego–based maker of continuous glucose monitoring (CGM) products for those with diabetes announced in June it would locate a 500-job, 180,000-sq.-ft. manufacturing facility in the Phoenix-area municipality of Mesa, with startup coming as soon as the second quarter of 2017.

“We chose Mesa due to the available, talented workforce, in addition to the proximity to our headquarters in San Diego and our key suppliers,” said Kevin Sayer, president and CEO of Dexcom.

Arizona Governor Doug Ducey gave at least partial credit to the fact Dexcom leaders were among those invited to a CEO forum held during the week of the College Football Playoff National Championship by a new business leadership group called the Arizona Zanjeros — zanjero is a term traditionally applied to those who controlled gates on canal systems. The Zanjeros host visiting CEOs and share first-hand testimony on the state’s business climate and lifestyle advantages. 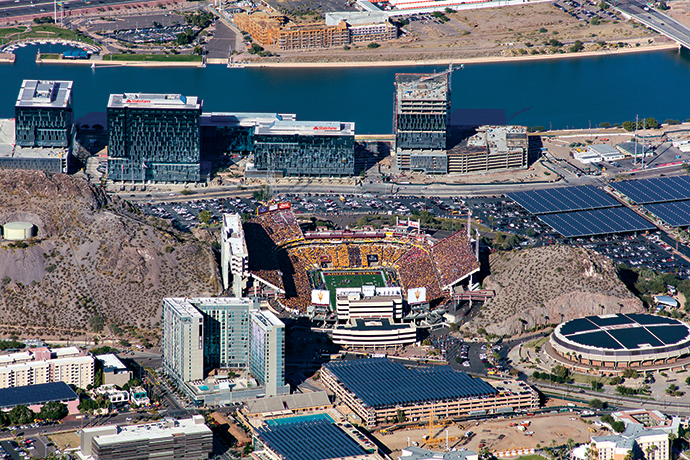 The City of Tempe’s new biomedical and technology campus will rise in one of the hottest real estate markets in Arizona, Tempe Lake, home to Arizona State University and to a new campus from State Farm.
Photo and rendering courtesy of City of Tempe

The City of Tempe City Council in August voted to move forward with the development of the city’s first biomedical and technology campus totaling five buildings and 1 million sq. ft.

“The project’s close proximity to ASU, key Tempe employers, the airport and area freeways make this an ideal location,” said Matt Jensen, partner at the Boyer Company, one of the project’s developers. City spokesperson Kris Baxter-Ging says the Tempe Town Lake district is “some of Arizona’s most in-demand prime real estate,” with a vacancy rate of less than 3 percent for Class A commercial space. The latest report from Lee & Associates states, “it’s tough to find Class A space for less than $30/SF/YR” in Phoenix hot spots such as Tempe and South Scottsdale. 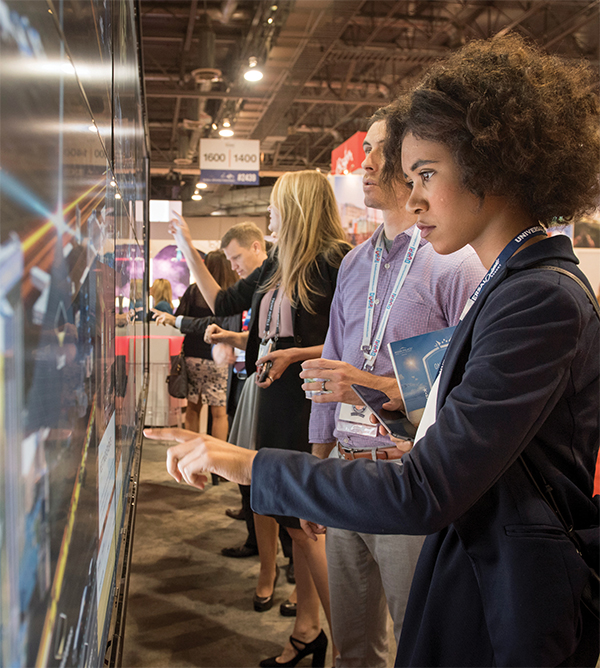 Even as Nevada benefits from projects such as Faraday Future and the Hyperloop in North Las Vegas, Tesla’s massive battery factory and eBay’s latest data center in the Reno-Tahoe region, everyone knows where the state’s bread is buttered: Fall meetings and conventions in Las Vegas alone will bring in more than $300 million in direct visitor spending.

The city hosts nearly 22,000 meetings and conventions annually. Even as it seeks economic diversification and gets it in places such as downtown and the suburb of Henderson, the city continues to be home to more than 11 million sq. ft. of meeting and exhibit space and nearly 150,000 hotel rooms, with some $7 billion in construction projects underway.

Overall, the meetings and convention industry supports more than 66,500 jobs and contributes $9.3 billion to the Southern Nevada economy, says the Las Vegas Convention and Visitors Authority.