A Business Climate With a History 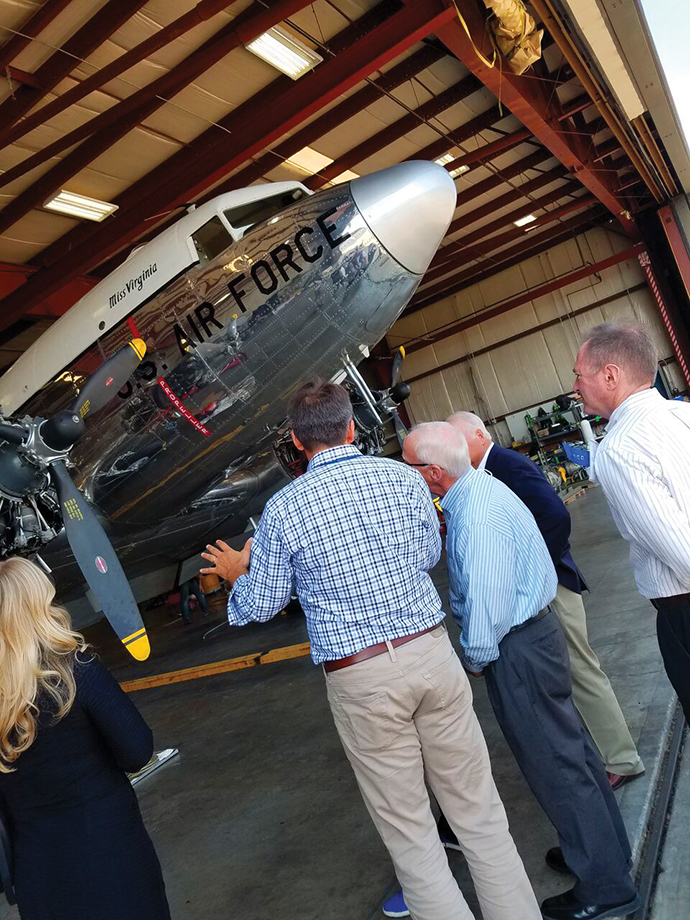 Dynamic Aviation provides heavy maintenance and modifications for aircraft at the company’s Bridgewater, Virginia, site. The original Air Force One is currently being renovated at the center.
Photo courtesy of Shenandoah Valley Partnership

Keep your eye on Virginia — it’s gaining on many of the perennial top finishers in Site Selection’s State Business Climate Rankings, which can be found in this issue. In one year, Virginia jumped seven spots — from a 12th-place finish in 2015 to sixth in 2016.

Todd Haymore, Virginia’s secretary of trade and commerce, thinks he knows why.

“Virginia has business success in its DNA,” he says. “Founded in 1607 as a business venture, our state has carried the values for business growth across centuries.” Haymore cites the state’s willingness to work with business and industry, geographic location and workforce as the top three reasons companies choose to locate there.

At 6 percent, the Commonwealth’s corporate income tax hasn’t risen since Richard Nixon was president, in 1972, to be exact. Companies find a non-restrictive regulatory environment, and the state offers comprehensive and competitive incentive packages that have, in the case of data centers and cybersecurity for example, changed the direction of the industry. The top project in capital investment for 2016, to date, is a $350-million Iron Mountain data center going into Manassas.

“Going back about six to seven years ago, the state changed some of its legislation to make it more attractive to data centers,” says Rhett Weiss, managing director of Strategic Initiatives for Womble Carlyle Sandridge & Rice. “I think that worked. When I was at Google and we were looking, Virginia wasn’t as attractive. North Carolina and other states were more interested in creating legislation that was favorable to the data center industry, to treat it more like a manufacturer. A lot of states got ahead of Virginia, but not anymore. Virginia came around, basically adding manufacturing exceptions like sales and property taxes. The state made it attractive to encourage the large capital investment. You’re going to see that continue.”

Big Boost for a Local Brewer

Food production and processing still dominate project lists in Virginia. A member of Virginia’s thriving craft brewing industry got a boost when Anheuser-Busch acquired Devil’s Backbone Brewing Company in early 2016. Steve Crandall, founder and CEO of Devil’s Backbone, was originally a real estate developer with a taste for good beer. He started Devil’s Backbone in Nelson County, almost as a hobby, but the popularity of the beer and the 2008 real estate crisis turned him into a full-time brewer.

Crandall opened a $12-million brewing operation in Rockbridge County outside of Lexington, Va.

“That facility was supposed to last us 10 years,” Crandall says. Two-and-a-half years later, he expanded again, adding another 15,000-sq.-ft. (1,400-sq.-m.) building and acquiring a larger brewing system. “Last year, we hired one person about every eight days,” he says. “For the last two years we’ve been named the fastest growing manufacturing company in Virginia, and there’s this phenomenal growth that was challenging to keep up with.”

Crandall’s desire to invest in Devil’s Backbone outstripped banks’ willingness to loan. After sorting through a number of offers, he settled on a $25-million offer from Anheuser-Busch, or as he affectionately calls it, “the Bank of Bud.” The deal closed on September 13. “They were willing to invest in the growth of the business as we saw it, as we wanted to grow the business,” Crandall says. “I’m the eighth craft brewery they’ve bought in the US. What I have found in talking to the other craft breweries they’ve bought is that Anheuser-Busch is not changing us, we’re changing them. They’re only interested in improving what we’re doing and they have a very long term vision of what the future is.”

A Region on the Rise

In particular, food processors have a long history in the Shenandoah Valley region, where Devil’s Backbone is located. More than 28,000 people are employed in forestry and agriculture in the Valley, creating a $6.2 billion regional economic impact. Those figures include entities like the Virginia Poultry Growers Cooperative (VPGC), founded 12 years ago when Pilgrim’s Pride shuttered its Rockingham County turkey processing facility. The co-op consists of 165 farmers doing about $300 million in sales annually.

The co-op is putting the finishing touches on a new plant built with the help of Rockingham County economic developers, the regional Shenandoah Valley Partnership (SVP) and the state. John King, general manager of the VPGC, says the co-op considered expanding at another location in Pennsylvania. Through the efforts of the EDOs, the VPGC was able to invest $70 million in a new processing plant and all the attendant infrastructure, to include an expanded wastewater facility improving the co-op’s environmental footprint. “And that doesn’t include between 50 and 60 new barns,” emphasizes King. “It’s a significant investment that really reaches out into the community. We’ve worked on the building for two years. When we start up on January 3, it will be one of the most modern facilities in the US for processing.” 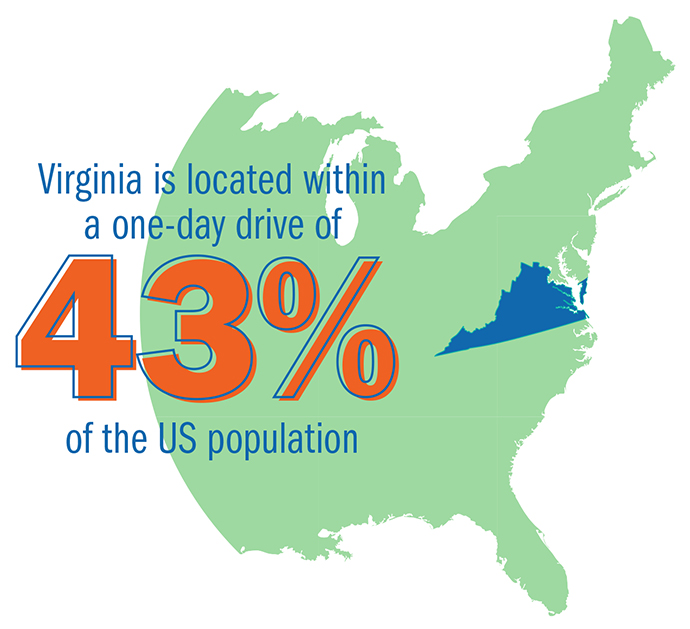 The Shenandoah Valley is an important logistics route, thanks mainly to Interstate 81, from Winchester southwest to Roanoke and Bristol. The highway makes strategic connections to Interstate 66 — connecting to Northern Virginia and Washington, D.C.; Interstate 64 — linking to Richmond and the Virginia seaports; and Interstate 77 from West Virginia south into North Carolina. The Shenandoah Valley Regional Airport currently connects to Dulles International Airport with three flights daily and is adding a link to another major regional hub this year.

The airport expansion piece is critical to business attraction and retention, says location analyst Weiss, who focuses much of his attention on data centers and other cyber-industry projects. “In some parts of the valley, it’s a two-plus hour drive to Dulles. Once they’re operating, one-hop connectivity will be important for the types of projects I look at. How well can your people come and go if they need to go across country, to Europe or elsewhere? I think the Valley is addressing the location side with the new connection,” he adds.

Since coming into office, Governor Terry McAuliffe has made business attraction and job creation his top priority. The state attracts everything from food production and processing to manufacturing of all types, from regional headquarters to distribution warehouses.

In early 2016, ADP, the business process outsourcing company, announced plans to invest $32 million in a customer service center in downtown Norfolk. The project will create 1,800 jobs, making it the largest job-creation project in the state for 2016. The city offered a $5-million performance-based grant to ADP, with an additional $5 million from the state’s Commonwealth Opportunity Fund and $1.8 million from the Virginia Job Investment program.

“Anheuser-Busch is not changing us, we’re changing them.”
— Steve Crandall, Founder and CEO, Devil’s Backbone Brewing Company, on the recent $25-million acquisition of his growing brewery in Rockbridge County in the Shenandoah Valley

The Norfolk workforce was an equally strong incentive for ADP. In addition to students from five colleges and universities, thousands of veterans transitioning from several military bases in the Norfolk region represent a well-trained and willing workforce. The company has a history of locating near military posts — such as recent investments in El Paso, Texas, near Fort Bliss, and Augusta, Georgia, home of Fort Gordon.

A new, 1.5 million-sq.-ft. (139,350-sq.-m.) Harris Teeter distribution center is being built in Caroline County in central Virginia on a 190-acre (77-hectare) site near Interstate 95. Construction will begin on the first phase of the project in 2017. The project is expected to create 400 jobs when fully completed.

Ridesharing company Lyft announced it will establish its Mid-Atlantic regional hub in Arlington County, which beat out Washington, D.C., for the $350,000, 32-job project. “Lyft is thrilled to open our new office in the emerging innovation center of Crystal City,” said Steve Taylor, the company’s general manager. “Building a strong presence in the D.C. area is crucial to Lyft’s growth, and we look forward to strengthening our ties to this area for years to come.”