The Columbus Region shines thanks to the success of the area’s retail industry.
Photos courtesy of Columbus 2020
Columbus skyline photo: Larry Hamill
by RON STARNER

When Yaacov Martin and his fellow Jifiti co-founders went looking for an American home for their Israeli-based e-commerce business, they didn’t have to search for long.

They found exactly what they needed in Columbus, Ohio.

Widely regarded as the headquarters city of choice for many of the biggest names in the global retail trade, Columbus provided Martin and his partners with the combination of resources they were seeking to bring their high-tech startup to the US.

An innovative gift-giving platform that empowers both the gift giver and the gift recipient, Jifiti is growing like wildfire as it goes mainstream by signing deals with such leading brands as IKEA, DreamWorks Animation, Barnes & Noble, Sephora, Staples and Toys R Us.

“Being based here in Columbus, the retailers can give us immediate real-world feedback on how our platform is working for them. That is the number one factor for us and it is a huge reason why we decided to locate here.”
— Yaacov Martin, Co-Founder, Jifiti

“When we started the company out of Tel Aviv, we were commuting back and forth to the US for about half a year,” says Martin. “We found a huge concentration of retail, our primary customer target, in the Midwest. We started to look into the cost of living and a growing ecosystem for startups and innovation. Columbus ranked way up there. We even found some of our funding in Columbus. We have found wonderful talent coming from the various schools here. It has been a terrific experience. We tell our friends back in Israel that the Midwest is a gem and Columbus is a treasure.”

The numbers back him up. The 15th-largest city in the US, Columbus’ retail industry yields a location quotient of 6.7 compared to the US and ranks higher than both New York and Los Angeles.

Columbus also ranks third in the US for its number of fashion designers.

Jifiti made the decision to move all of its marketing, sales and back-end corporate offices to Columbus. “We needed a place where we were able to pick the brains of these massive retail clients,” says Martin. “It is all great to be in an ivory tower developing products, but you need real-world experience. Being based here in Columbus, the retailers can give us immediate real-world feedback on how our platform is working for them. That is the number one factor for us and it is a huge reason why we decided to locate here.”

A ‘Mind-Boggling’ Array of Brands

Martin adds that Columbus is internationally known as a destination for top retail brands. “Columbus stands out as a retail capital of America,” he notes. “The number of major brands that either originated in Columbus or moved here is mind-boggling.”

“We are building a new fulfillment method and catering to over 100 major brands today,” he adds. “We are actually housed in an old toilet factory in Franklinton and we share this building with other designers, producers, architects, artists and scientists. The Ohio State University has a mathematics lab here. Eventually, we plan to bring some of our R&D over here too.” 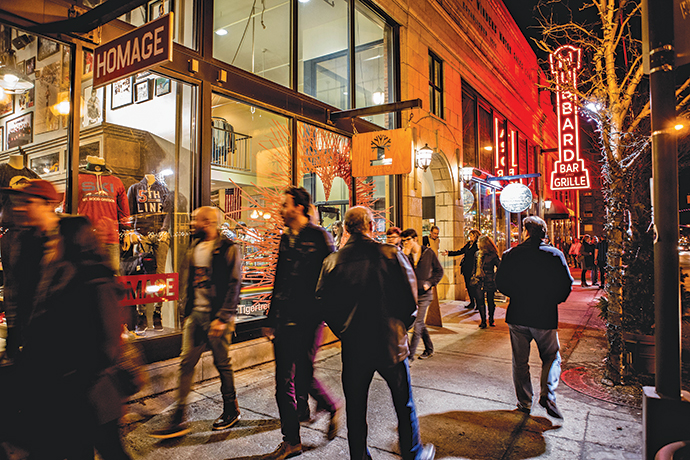 Columbus is the birthplace of a plethora of innovative retail concepts such as Homage, a vintage sports memorabilia seller that started out as an ecommerce vendor.

Jifiti is not alone. Chute Gerdeman, an award-winning retail branding and design firm headquartered in Columbus, now counts Whole Foods, Verizon Wireless and Dylan’s Candy Bar among its many clients in the retail and e-commerce sector.

“E-commerce is still only about 10 percent of retail sales but it is growing very rapidly,” says Brian Shafley, CEO of Chute Gerdeman, which was launched more than 25 years ago. “We are located here because Columbus is a retail hub and it is a capital city in the middle part of the country. There is this perception that anything that’s new happens on one of the two coasts, but that is not correct. Columbus is central to the US population.”

Chute Gerdeman’s ties to Columbus run deep, Shafley notes. “There was an early focus on retailing as a science when we founded this company,” he says. “It grew out of the business school at Ohio State. It brought about the new era of retailing. Les Wexner, chairman and CEO of L Brands, started a number of specialty store concepts and that dramatically changed the world of retailing, which had been dependent primarily on department stores.”

A Hotbed for Retail Consulting

Shafley adds that “Columbus is a hotbed for retail consulting. We have found it to be a great place to operate internationally. Quite a few schools are around that teach retailing and design. Columbus also has an emerging retail scene. It has a younger demographic.”

That young talent has led to the emergence of such successful digital and brand research firms as Resource/Ammirati and Lextant, among others, and more startups are being launched in Columbus every year.

Shafley says he likes that kind of vibe. “We are located in the Brewery District in a building built in 1885,” he says. “I am a Columbus native, and this is the most activity I have ever seen on the entrepreneurial front. Emerging retail and restaurant concepts are coming to this area now, and our firm is really trying to focus on the next era of retail that is on the horizon.”

Increasingly, the leaders of retail are finding that horizon in the Columbus Region.

This Investment Profile was prepared under the auspices of Columbus 2020. For more information on the Columbus Region, call 614-225-6063 or go to wwww.columbusregion.com.

FROM TOYS TO FURNITURE AND GOLF: Here’s Who’s Buying All Those Vacant Toys R Us Stores (Oct 30, 2018)

THE RETAIL CROSSROADS - EXPLORING THE POTENTIAL FOR MALLS: Despite the recent stagnant performance of regional malls and the growth of e-commerce, major real estate investors are acquiring retail assets. (Sep 26, 2018)