‘Miracle in a Cornfield’ 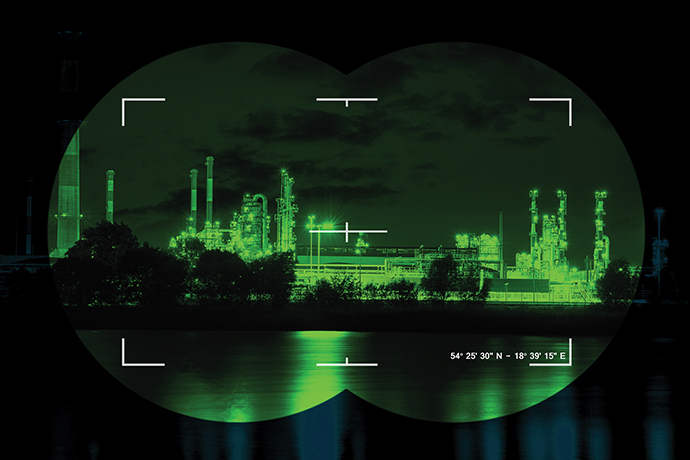 Would it surprise you to learn that the third largest US naval base in the world is located 90 miles southwest of Indianapolis? In fact, Naval Surface Warfare Center, Crane Division (NSWC Crane) has made its home in Crane, Indiana, since 1941 when it was commissioned as the Naval Ammunition Depot for production, testing and storage of military weapons. It still serves as an ordnance repository for the US Army, but the NSWC Crane mission has expanded and evolved with the times.

Today the base has more than 5,000 employees, 98 percent civilian, testing components and parts for critical strategic weapons systems; ensuring supply chain integrity; equipping the nation’s Special Forces units with many of its sophisticated weapons, sensors and communications equipment; and creating and supporting electronic warfare systems for ground units, surface ships and aircraft. Night vision technology and systems for detecting Improvised Explosive Devices (IED), a devastating weapon used by enemies in Iraq and Afghanistan, were both developed at Crane. The base is an economic engine in the region around which an extraordinary synergy has emerged.

Back from the Brink

It took the near-closure of Crane during the 2005 Base Realignment and Closure (BRAC) process to accelerate development of the ecosystem. “In the 2005 BRAC, two deficiencies were noted for the naval base. One was no tech park and the other was no freeway,” says John Mensch, one of the longest serving members of the WestGate@Crane Authority and its current chairman. “Well, the government solved the freeway situation with the completion of a portion of I-69 just outside the base.”

As for the tech park: Enter Indianapolis-based developer Dale Ankrom. In 2006, Ankrom and two other investors began developing the 300-acre WestGate@Crane Technology Park, located in three counties: Daviess, Martin and Greene. The Indiana Economic Development Corporation (IEDC) stepped in and provided certification of the tech park. When it opened in 2007, then-Indiana Lt. Governor Becky Skillman called it a “miracle in a cornfield.”

“We still have some shovel ready sites, which means all they have to do is build the buildings,” says Brian Sparks, a WestGate Authority board member and CEO for Utilities District of Western Indiana REMC, the electric cooperative for WestGate and one of the 18 member co-ops that comprise the Hoosier Energy network. A majority of the tech park’s tenants do business with Crane.

“Our ecosystem extends beyond our gates,” says Brian Blackwell, director of engagement at NSWC Crane. “Many of our defense service contractors are in the WestGate Tech Park and that’s largely driven by the amount of interaction they need to have with our employees. You can get on or off base in five minutes. The state has been very supportive of the Crane facility and recognize we’re an important asset — Hoosiers doing important work. With our salaries and contracts, we pump about $2 million a day into the economy.”

Additionally, the base contracts for between $750 million and $1 billion every year for products and services. “We require the disciplines that any community requires,” Blackwell adds. “Most of us are technicians and engineers, but our base commander has to provide the same services you’d see in any city.”

A relatively new Crane partner is the Battery Innovation Center (BIC), which opened its doors in WestGate in 2013. The BIC was initially funded by sizable grants from Greene County and the state. It’s strategically located in a corner of the tech park, adjacent to a Hoosier Energy substation. Dave Roberts, president of the BIC, says the state has a rich history of advanced battery research and technology. After reviewing the location of STEM assets, like Crane, and forecasting future market potential, the decision was made to invest in power technology and energy storage.

While the BIC does partner with Crane, using testing facilities on base, the center has pivoted toward more commercial work. “Ninety-five percent or more of our work now comes from the commercial sector,” Roberts says. “We’re working with young companies validating their technology and with mature companies helping them with some of their advanced R&D efforts.”

The BIC has attracted commercial partners to southern Indiana that weren’t previously active in the region, including Black Diamond Structures from Austin, Texas; SiNode Systems from Chicago; and Duke Energy, which gave a $1-million grant to the BIC to study microgrid technology.

“Underwriter’s Laboratory (UL) started a relationship with the BIC in 2015,” says Roberts. “We are their exclusive partner for large-format battery testing in North America. I think the combination of access, I-69 opening up, as well as capabilities and collaborative atmosphere in the work environment attracted them. They actually have a portion of our lab that is considered UL laboratory. They have a full time person here that’s a UL employee.”

Higher education has a presence in this ecosystem as well. An adjunct professor from Purdue University is located at the BIC. “He’s here on site all the time and works shoulder to shoulder with our team,” Roberts says. “He’s written numerous grant proposals and was largely responsible for administering the main grant we had over the last two years.”

The futures of the BIC, WestGate and Crane are linked not just by the technology but by the workforce, now and in the future.

“We really represent STEM-oriented economic development in a region of the state that isn’t always front-of-mind when you talk about those things,” Roberts says. “There are plenty of talented, bright individuals that live in this part of the state. These assets provide an outlet to exercise those talents locally.”