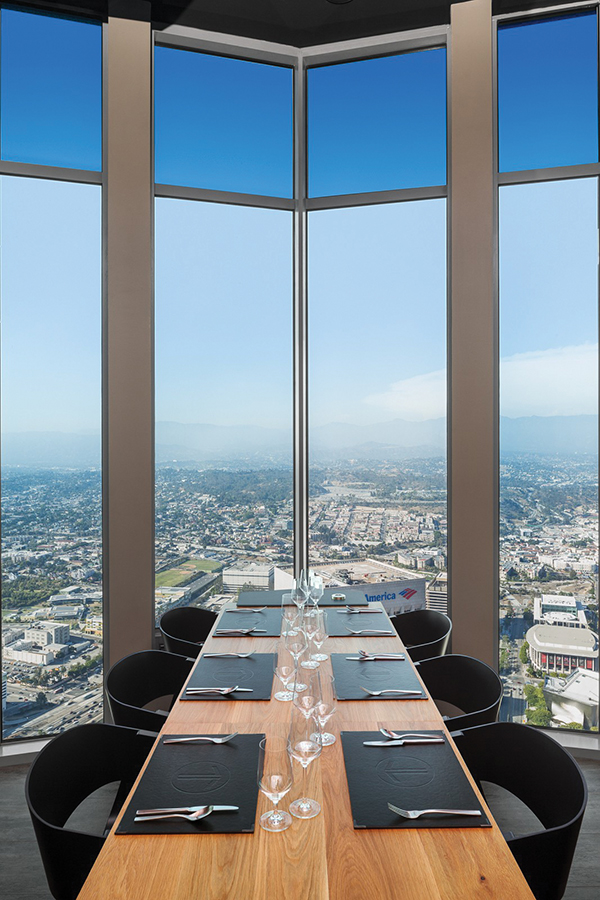 Specialized glass produced at Sage Electrochromics’ plant in the small town of Faribault, Minnesota, is installed in such high-profile urban locations as 71Above, a Los Angeles restaurant offering breathtaking views of the LA basin and the Pacific coastline.
Photo courtesy of SAGE

It’s become evident that rural and remote are not synonymous.

Long touted for its strong agrarian work ethic and cheaper operating costs, non-urban America is better connected and better equipped than ever before. That connectivity comes not just via roadways, but through high-speed communications, industry supplier-consumer collaboratives, and a web of business support services as well.

Yes, by sheer numbers, the magnitude of available workers in many of these locales is paltry compared to their urban counterparts. And even with enhanced transportation, business travel can be troublesome. But concentrations of cutting-edge industry expertise can be found well beyond America’s major metro areas — so much so that some companies are coming to these locations because of and not in spite of their labor profile. It’s become evident that rural and remote are not synonymous.

Enhanced connections and industry workforce clusters in more rural locations can pique the interest of companies headquartered outside the US. This is evidenced by new foreign direct investment, acquisition of US operations, and cross-continent partnerships leading to shared expertise, joint production and international distribution. The path for foreign investors into the US can be a challenging one, especially in less traveled rural areas. But many foreign-owned firms making their first foray into this country choose smaller communities. For some companies, this is a natural decision because a rural operating environment is the norm for them, not the exception.

As with domestic business investment into these areas, decisions among foreign-affiliated businesses are often tied to regional workforce competency, a pre-existing company relationship, access to raw materials and key inputs, an available building, and industry-targeted government assistance. But these decisions are emboldened when the location they examine has an industry mindset and work ethic similar to their own.

Faribault is a community of 24,000 in Rice County, a rural Minnesota county an hour from the Twin Cities. It is here where SAGE Electrochromics makes tintable smart window glass. Think transition eyeglasses that adjust to the sun’s rays, but in the form of windows with electrically-charged glass and nanotechnology, hyper-light and heat sensitivity, and controllable by an iPhone app. Universities, iconic office buildings, museums, airports and others have been using SAGE glass in their windows. The US Department of Energy awarded SAGE a multi-million-dollar loan guarantee and tax credit to continue its advancements in green construction.

SAGE was incubated in Rutgers University’s Department of Ceramic Science and Engineering in the early 1990s. Today, SAGE’s more than 200 employees work in its 329,000-sq.-ft (30,565-sq.-m.), $125-million LEED-Gold-certified facility. A national search led to the selection of Faribault in a Minnesota region along I-35 that some local leaders have coined “the Silicon Valley of Windows.”

In addition to needing Interstate highway proximity for safe product trucking (fragile glass can get damaged on side roads), SAGE sought reasonably close proximity to a research university and a major airport, both of which are within an hour of the facility. Minnesota has among the widest summer-to-winter temperature swings in the US. In characteristic Minnesota understatement, Glenn Gengel, SAGE’s vice president of manufacturing, says, “Comfort is fairly important here,” so this was also a fine place to test and refine SAGE’s window technology.

Because of the highly automated nature of its processes, SAGE sought an educated and skilled workforce, preferably two-year-degreed plant floor operators, four-year STEM-educated production engineers, and a pool of PhDs for R&D. The state’s workforce is highly educated but “Minnesota has been at virtual full employment the last couple of years, and we can’t hire too far in front of our sales curve,” says Derek Malmquist, SAGE’s vice president of marketing. SAGE has been working closely with the local technical college to help ensure people are properly prepared.

“Upon arrival, plant management was overwhelmed by the stacks of business cards and flyers left by suppliers on vehicle windshields.”
— Jim Sattler, Geringhoff’s USA operations manager, on the company’s welcome in St. Cloud, Minnesota

With job-training financial support from the State, SAGE’s own resources and help from French multinational corporate parent Saint-Gobain, Malmquist says, “We are moving back to the century-old practice of apprenticeships so folks can work for us full- or part-time while also going to school full-time.” Deanna Kuennen, Rice County economic development director, adds, “South Central College, our region’s technical school, is a huge advocate of apprenticeship programs and a strong partner in this arrangement.”

The culture of collaboration manifested itself in the early days of SAGE’s existence in Faribault, when other window companies helped them scale their technology for the factory floor, cooperative electric power costs were negotiated using demand-based pricing, and government incentives were packaged with the patient recognition that SAGE wouldn’t be making money on day one.

In 2012, Saint-Gobain, a behemoth in the glass and building materials industry, purchased SAGE. This has infused SAGE with capital for additional growth and given the company global reach.

Geringhoff is a German-owned manufacturer of harvesting equipment, specifically corn heads used for corn harvesting and other farm machinery. Geringhoff is a fifth-generation, family-owned business — typical of the class of German companies known as the mittelstand — that started to sell into the US in 2005 strictly from its dealer network. Seeking to better penetrate the booming US agricultural market, Geringhoff decided to set up production operations in the States, and undertook a location search centered on the country’s corn-growing states.

The company was accustomed to operating in smaller communities from its 135-year presence in Ahlen, a town of 50,000 located outside Dusseldorf. Geringhoff’s criteria included a well-qualified workforce with experienced manufacturing technicians and welders, and a quality of life suitable for attracting talent from the outside. The company also sought a robust, nearby network of suppliers in fabricated metals, hydraulics, advanced plastics and electronic components.

In 2012, Geringhoff selected St. Cloud (pop. 65,000) as its first location outside of Germany. The company needed a workforce that would embrace its German design engineering and its integrated manufacturing approach, with the ability to access adaptable suppliers as needed. According to Jim Sattler, Geringhoff’s USA operations manager, “Upon arrival, plant management was overwhelmed by the stacks of business cards and flyers left by suppliers on vehicle windshields.” Today, 90 percent of Geringhoff’s suppliers are within a one-hour drive. The familiar and familial feel of the community was a huge attractor for Geringhoff. Many in the St. Cloud region already knew Geringhoff products, the city has a strong Germanic heritage, and the mayor (active in recruiting Geringhoff) is fluent in German.

The company received a variety of state incentives, including training assistance and tax benefits from Minnesota’s JOBZ program. In the end, the blend of small-city livability, workforce readiness, supplier enthusiasm, and direct support from state and regional authorities turned the tide in favor of St. Cloud.

“Ours is an ongoing relationship with Geringhoff, and we will continue to help them grow in St. Cloud,” says Patti Gartland, president of the Greater St. Cloud Development Corporation.

In May 2016, Viva Holdings, an innovator in rubber and plastics recycling, announced its expansion into St. Stephen (pop. 2,000), an hour from Charleston in rural Berkeley County. Viva will use its recently purchased 177,000-sq.-ft. (16,443-sq.-m.) facility and anticipated workforce of 200 to produce thermoplastic elastomer (TPE) products for a wide range of industries. One of Viva’s earlier accomplishments was its help designing the infill field cushioning (the black pellets) common today in NFL, college football, soccer and other fields made of artificial turf.

Initially, its products will serve the southeast US marketplace. But through a recent partnership inked with a Chinese firm, Viva will also use US recycled plastics and rubber to manufacture stronger, more environmentally conscious products shipped to China via the Port of Charleston. 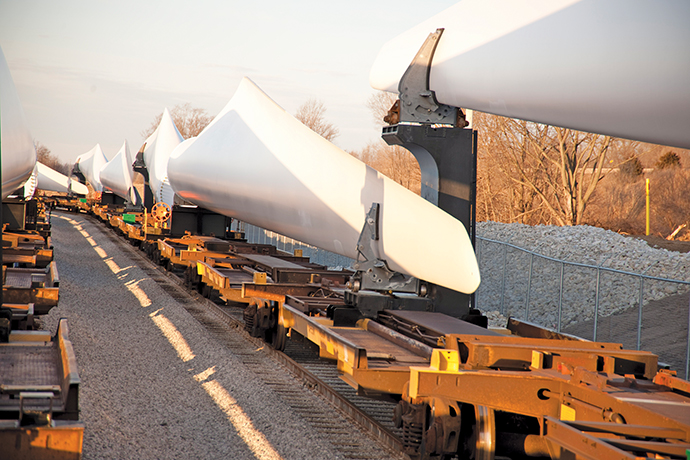 Since opening a wind turbine blade manufacturing facility in 2007 in Fort Madison, Iowa, on the banks of the Mississippi River, Siemens has grown the operation to a payroll of 500 today, in a town of 11,000.
Photo courtesy of Siemens

“We’re in the center of the Southeast, which dramatically underutilizes its recyclable materials,” says Viva’s President & CEO Marty Sergi. “Locating in rural Berkeley County gives us access to this fertile market and the affordable space we need for future expansions. But it also provides us a workforce that can be easily trained in partnership with South Carolina’s technical college network [readySC] to run our customized equipment.”

Its location in South Carolina, a hotbed of automotive manufacturing, affords Viva a constant source of raw material for recycling and an ongoing opportunity for its conversion into products like playground flooring and asphalt already made by Viva.

In 2012, Czech Republic-based Mitas opened its farm tractor tire manufacturing plant in Charles City (pop. 7,000) in northeast Iowa. Today, the Mitas plant employs roughly 200 workers. Prior to this US investment, all Mitas production was via its four plants in the Czech Republic and Serbia.

The US was selected as the company’s hub for the Americas and for global distribution. And Charles City was chosen specifically because of its seasoned farming-community manufacturing workforce, tractor building history and strong immigrant ties with the Czech Republic dating back more than a century. Mitas located in a former Winnebago Industries building and received state and local investment incentives as well as technical training support from the nearby community college.

Iowa is a leading state in wind power generation; about 25 percent of its electricity comes from wind turbines. Wind power development in Iowa got a boost in the 1980s when a state law required investor-owned utilities to purchase power from wind generation. In 2007, Germany’s Siemens Energy opened a wind turbine blade manufacturing facility in Fort Madison (pop. 11,000) on the Iowa banks of the Mississippi River.

Siemens acquired a shuttered tractor-trailer facility and invested more than $100 million in equipment and retrofits. The company received federal tax credits as well as state-administered funds. Siemens entered into partnership with MidAmerica Energy, a Midwest electric power provider based in Iowa, to supply locally made blades for the state’s wind expansion projects.

Since its opening, Siemens in Fort Madison has grown dramatically, and now employs close to 500 workers.

Adam Prager is president of Prager Company, a leading economic development and location advisory firm with decades of experience throughout America’s rural and urban regions (www.pragercompany.com).