Raytheon’s decision in Tucson shows how a low ranking can sometimes point to a growth opportunity. 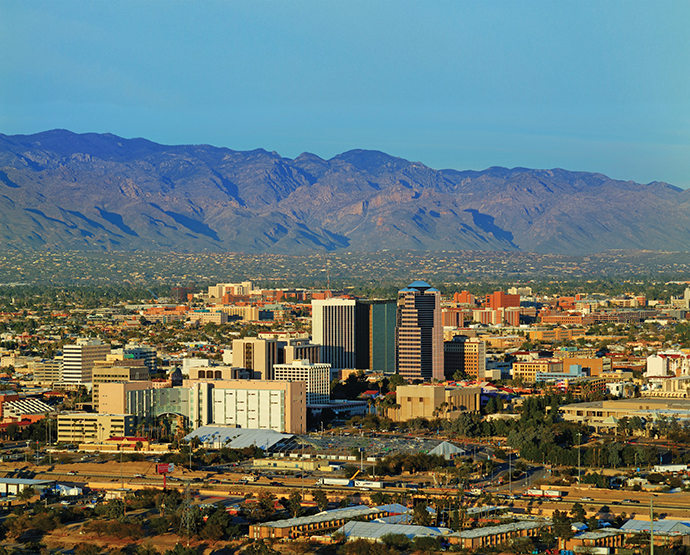 Research on advanced industries launched by The Brookings Institution several years ago received its latest update in August 2016. Among the state and metro findings, the Tucson metro area in Arizona was shown to have shed more than 1.5 percent of its employment between 2013 and 2015 in the 50 R&D- and STEM-worker-intensive industries Brookings tracks.

That put the area on a low rung compared to the other 99 metro areas the think tank follows. However, the area also showed a strong advanced industries employment concentration of between 8.6 percent and 10.1 percent. Somewhere in the delta between those two findings lurked skills and expertise.

That may have been one factor in Massachusetts-based Raytheon Company’s November announcement that it plans to expand its Southern Arizona operations by adding nearly 2,000 jobs at its Missile Systems business headquarters in the region over a five-year period. The company plans to hire workers at all skill levels with an emphasis on engineering and other higher-wage, technical positions. Job creation, facilities expansion and operational output is expected to result in billions of dollars of economic impact for Arizona over 10 years. 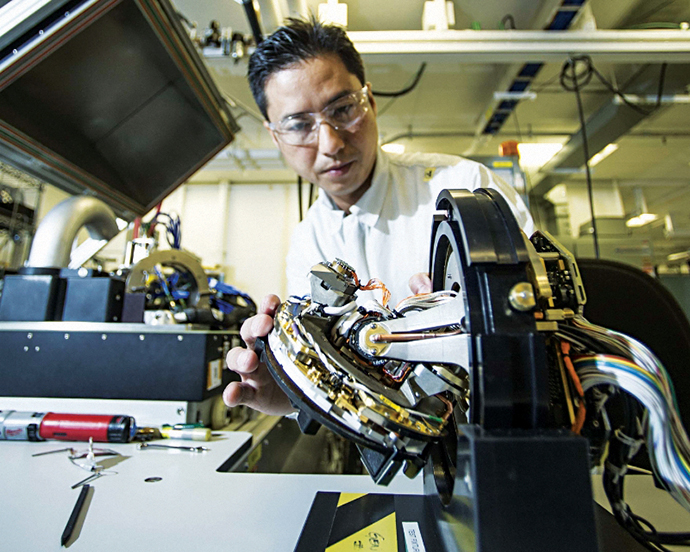 Raytheon in November 2016 announced it would expand its Southern Arizona workforce by 2,000 workers over the next five years, mostly in engineering and technical fields.
Photo courtesy of Raytheon

“These rewarding, high technology jobs will support Raytheon’s growth and bring even more top talent to this region,” said Dr. Taylor W. Lawrence, Raytheon Missile Systems president. “The strong support we receive from state and local organizations is essential to our expansion plans, and will help provide Raytheon with the workforce and infrastructure to meet the growing demand we are seeing from our customers.”

“With an existing workforce of 10,000 people and a network of over 500 suppliers in Arizona, Raytheon is the largest private employer in Southern Arizona and has an incredibly positive economic impact throughout our state,” said Governor Doug Ducey. “Increasing Raytheon’s infrastructure and job growth in Arizona is a major win for all of us, and the result of strong partnerships statewide.”

Particular attention to the city’s boundary lines was meaningful too, as was supportive infrastructure investment.

“Raytheon’s decision to annex into the city gave them the tools and opportunity to stay and grow in Tucson,” said Tucson Mayor Jonathan Rothschild. “Management saw that being part of Tucson made good business sense.”

“Altogether, the country’s 100 largest metropolitan areas contained 74 percent of all US jobs in the advanced industries sector in 2015.”
— Brookings Institution

“In recent years, the county has made several key transportation/infrastructure investments near Raytheon to support potential expansions such as this one today,” said Sharon Bronson, chair, Pima County Board of Supervisors, “including the Raytheon buffer zone; creation of the Aerospace, Defense & Technology Research and Business Park; and rerouting Hughes Access Road to create the new Aerospace Parkway.”

Those improvements and more have allowed expansions and relocations from such companies as Caterpillar, HomeGoods and Comcast, said Joe Snell, president & CEO, Sun Corridor Inc. “Southern Arizona is now at the top of national job growth rankings,” he said, “making us a region on the move.”

The Lowdown from Brookings

The research from Brookings shows that, between 2013 and 2015, all but seven states saw both output and employment expansions, as did 80 of the largest 100 metropolitan areas. “Nonetheless,” said the think tank’s report, “the shifting fortunes of the sector’s various industries are altering and, to an extent, narrowing the geography of advanced industries’ growth.”

That mostly means good news for the Northeast and the West, as states in those US regions “captured larger shares of the nations’ 2013–2015 advanced sector growth than they did in the previous three years thanks in large part to their specializations in fast-growing high-tech services ranging from computer systems design to R&D. In the Northeast, for example, tech-intensive New York, Massachusetts, Rhode Island, Maine, New Hampshire, and Connecticut all saw significant quickening of their output and employment growth. Similarly, tech-oriented Western states, including Utah, Oregon, Colorado, California, and Idaho, also saw rapid, accelerating growth on both measures.”

“Between 2013 and 2015, all but seven states saw both output and employment expansions, as did 80 of the largest 100 metropolitan areas.”
— Brookings Institution

Indeed, in December, Colorado companies with technologies that could improve 3D printing, doctor/patient interactions and farming were approved for funding as part of the Advanced Industry Accelerator Grant Program through the Colorado Office of Economic Development and International Trade (OEDIT).

A total of $4,141,990 was approved in the latest cycle for Proof-of-Concept and Early Stage Capital and Retention Grants to support Colorado’s advanced industries. The Advanced Industry Accelerator Programs (AIA) — encompassing Proof of Concept, Early Stage Capital and Retention, and Commercialization Infrastructure — were created in 2013 to promote growth and sustainability in Colorado’s advanced industries by driving innovation, accelerating commercialization, encouraging public-private partnerships, increasing access to early-stage capital and creating a strong infrastructure that increases the state’s capacity to be globally competitive.

Brookings noted that 26 metropolitan areas especially oriented toward advanced manufacturing “saw their aggregate advanced industries’ output grow at a steady 2.17 percent CAGR between 2013 and 2015 (compared with 0.88 percent between 2010 and 2013) while employment growth doubled to 3.38 percent. This group of advanced manufacturing-oriented metros ranges from the highly specialized Wichita, Kansas; Toledo, Ohio; and Grand Rapids, Michigan; to Ogden, Utah; Boise, Idaho; and Providence, Rhode Island. Fourteen of these 26 metro areas saw the pace of their output growth increase, and a slightly different 14 saw the pace of their employment growth pick up.”

The picture in Providence got even prettier in June 2016 when GE Digital announced that it would locate an initial 100 jobs at a new IT center in the city, where new work in software applications and high-performance computing would take place. Providence was a runner-up in the GE HQ site selection process that had chosen Boston earlier in the year. 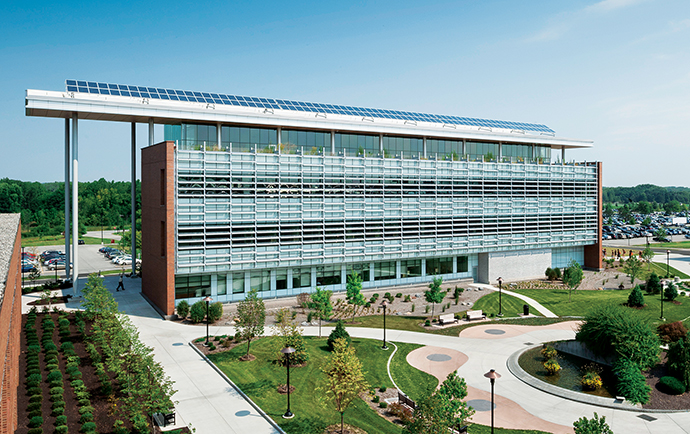 Though Rochester shows slight contraction in advanced industries, like other cities it has the heritage and the talent. Golisano Institute for Sustainability at Rochester Institute of Technology in New York is one of nearly 200 partners across 30 states in the Smart Manufacturing Leadership Coalition, named in June 2016 to lead the new Los Angeles–based Smart Manufacturing Innovation Institute.
Photo by Alex Tong courtesy of RIT

By contrast, such niches as chemical products manufacturing in Rochester, N.Y., and Oxnard, Calif., and iron and steel production in Cleveland, Ohio, saw contraction.

If the Tucson example is any sort of guide, that might just mean opportunity lurks in these redeveloping cities too.

Big Investment? How About $100 Billion in Savings? 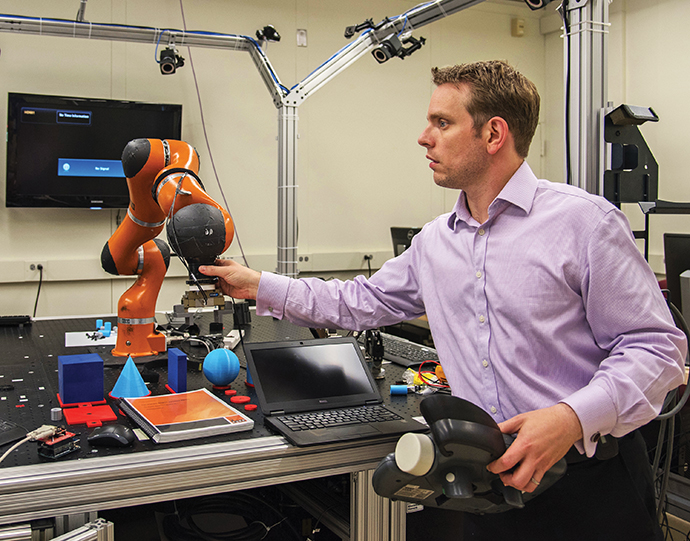 “Gaps in the technology infrastructure — including the lack of reliable measurement and test methods, scientifically based standards, and other formal knowledge and tools — limit advanced manufacturing’s further development and adoption,” said National Institute of Standards and Technology economist Gary Anderson in November of four studies prepared by RTI International, an independent nonprofit research institute. And spanning those gaps could save major money. For example, establishing industry-wide standards and measurements for the inks and substrates used in roll-to-roll (R2R) manufacturing — the fabrication of electronic devices on a roll of flexible plastic or metal — is projected to reduce production costs by 15 percent. For each of the four advanced manufacturing technologies studied, the estimated annual cost savings and percentage reduction in production costs are:

“If we consider the larger-scale outcomes brought about by meeting these needs — such as new and improved products, increased production quality, long-term industry growth and job creation — the impacts would be significantly higher,” Anderson said. Among the needs that must be met to realize both of these benefits, the researchers said in a release, is increasing access by small- and medium-sized manufacturers to the same state-of-the-art methods, tools and knowledge as their larger counterparts. 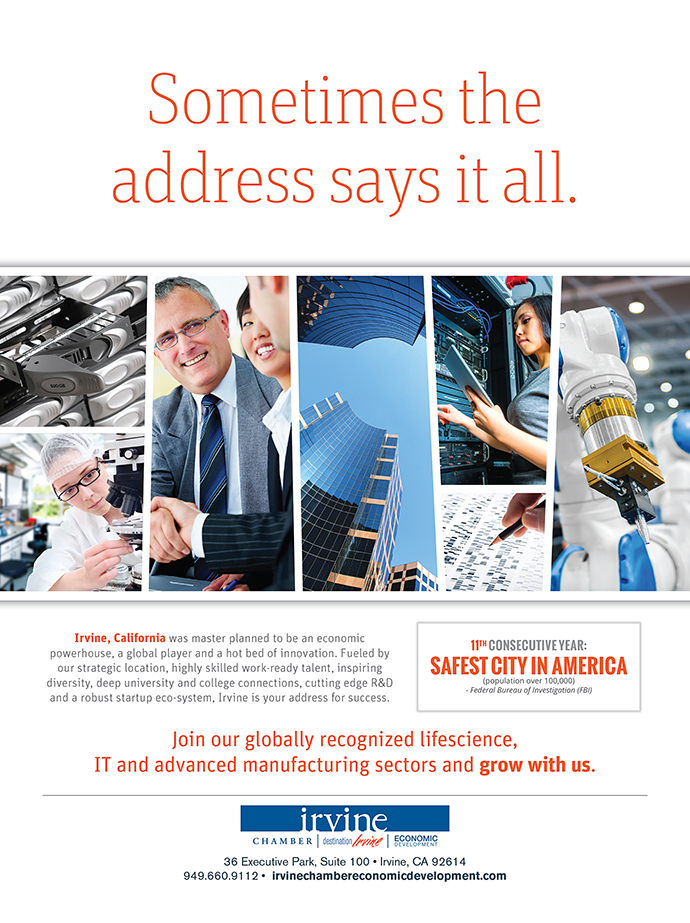 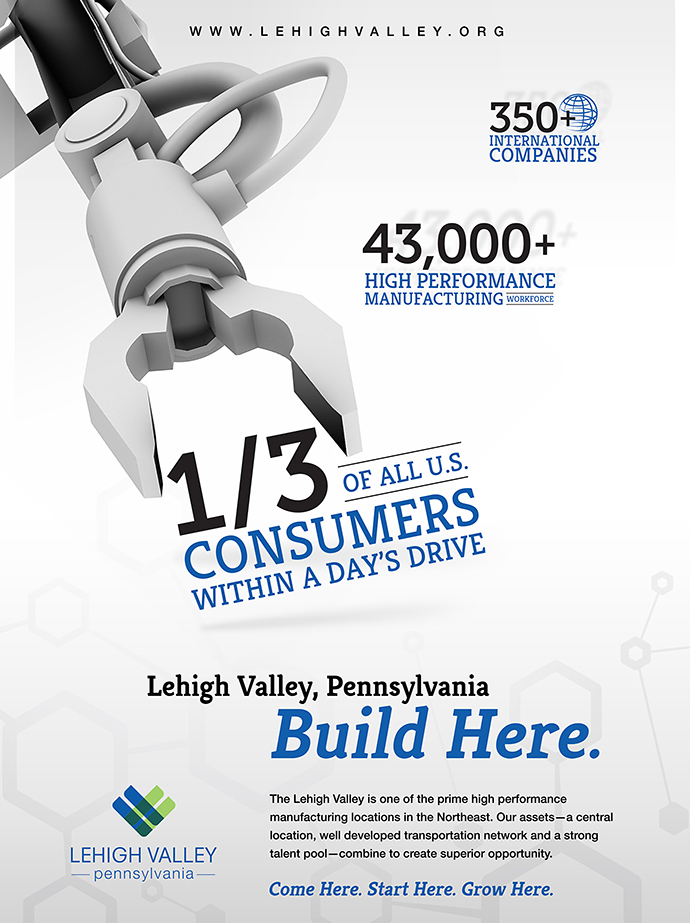 According to recent census data, Cape Coral, Florida’s population jumped by 14%, to more than 175,000 year-round residents. With an average of 266 days of sunshine a year, it’s no wonder Cape Coral continues to grow with rapid speed. 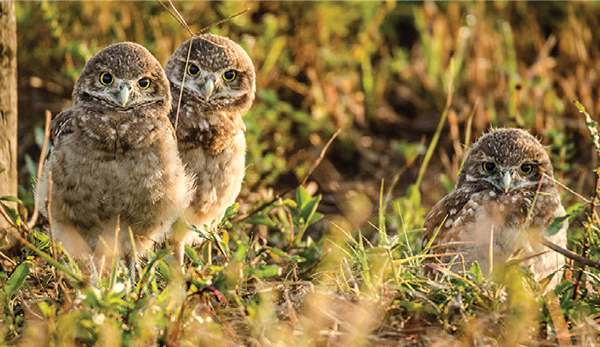 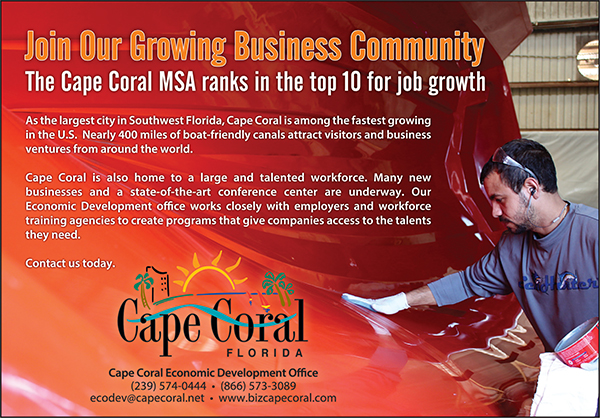 From its stunning topography to diverse workforce, Peoria, Arizona is becoming an increasingly popular place to live, work and invest. Peoria is in a unique position. It is a growing city with a thriving business community, a high-quality workforce, a large portfolio of biomedical startups, dozens of premiere sites for investors and developers, and opportunities for public-private partnerships. Peoria is strategically developing its economy to compete for local, national and global business. With a supportive mayor and highly involved city council driving the economic development strategies, Peoria’s leaders are not only taking control of their future, they are creating it. 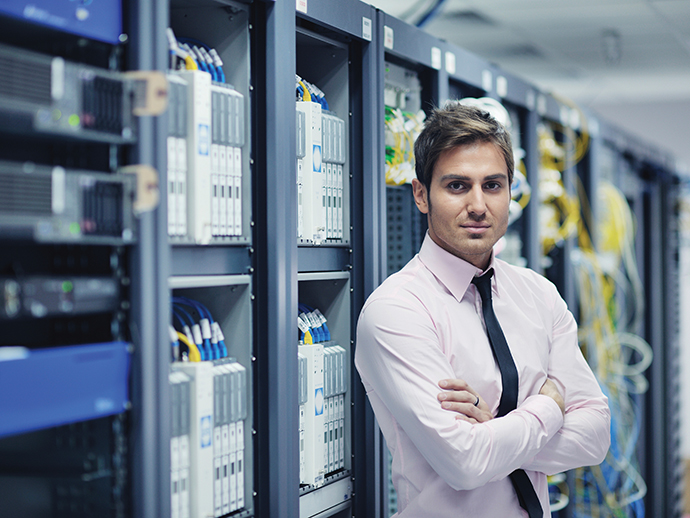 Having an available, high quality workforce is essential in today’s competitive business environment. Peoria has an abundant, educated workforce within a 20-minute drive from most major employment centers in the Phoenix metropolitan area. The average professional in and around Peoria is young, approximately 35 years old, with a college degree. With many more working years left, these entrepreneurs and professionals dominate today’s workforce. A strong and talented workforce makes the relocation and/or expansion decision easier for investors and businesses that are ready to make a smart move.

Peoria was recently ranked number seven on the America’s 50 Best Cities to Live list for Yahoo Finance, and for good reason. With a high quality of life, many development opportunities, and targeted workforce initiatives, Peoria is a great place to live and work for families, professionals and business owners alike. 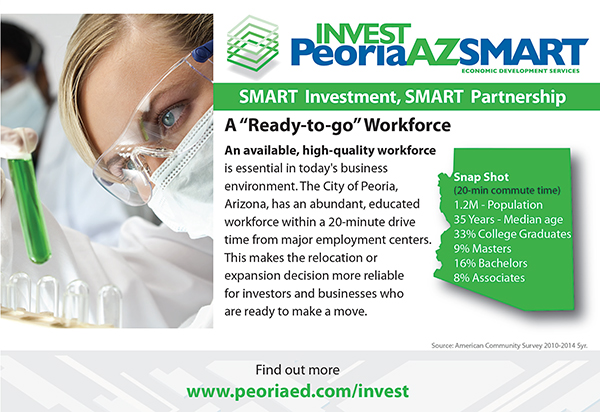 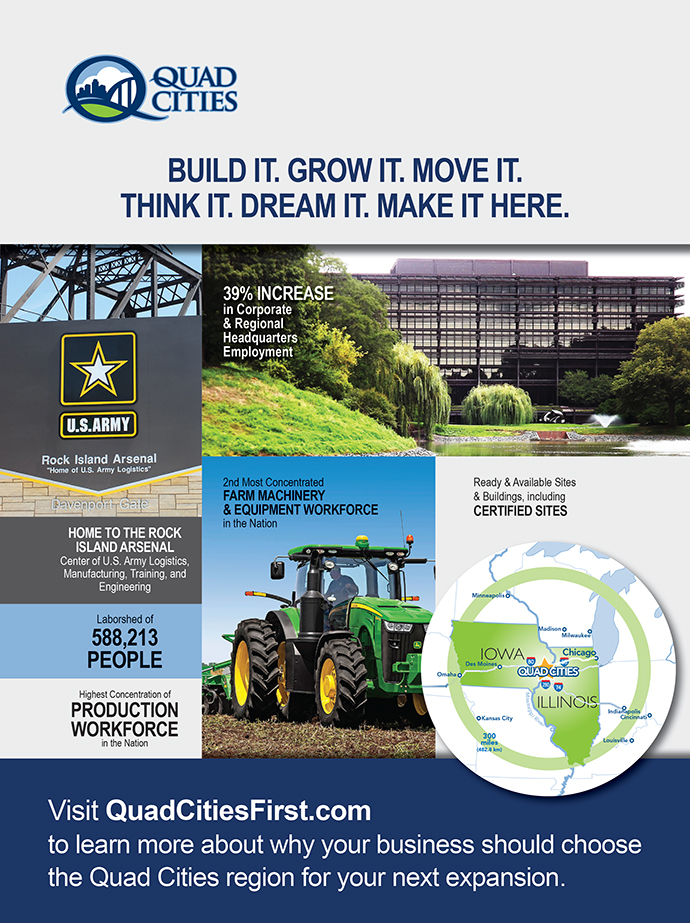 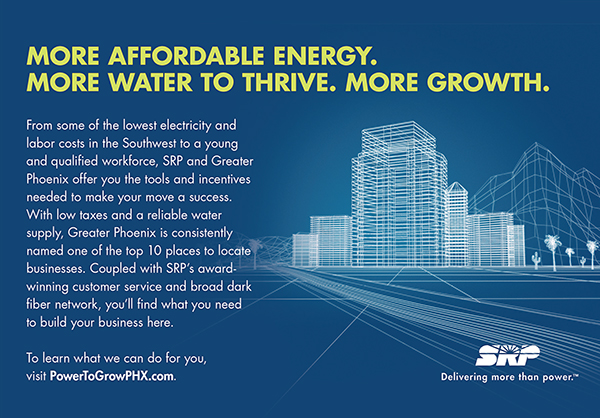 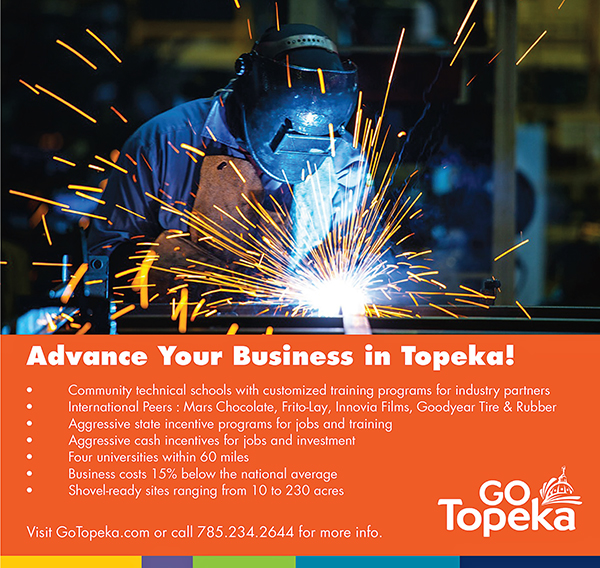 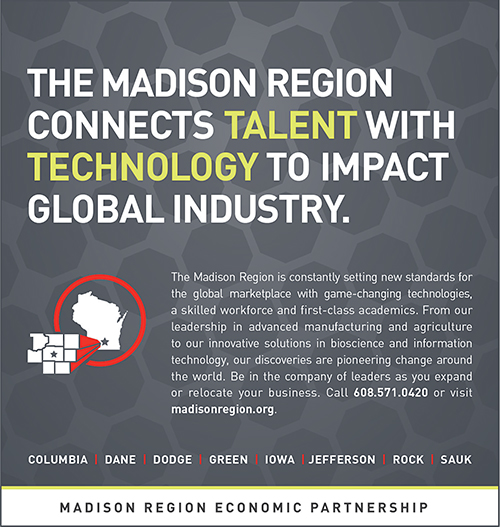