A former Air Force base is where to chart the regional cluster’s progress. 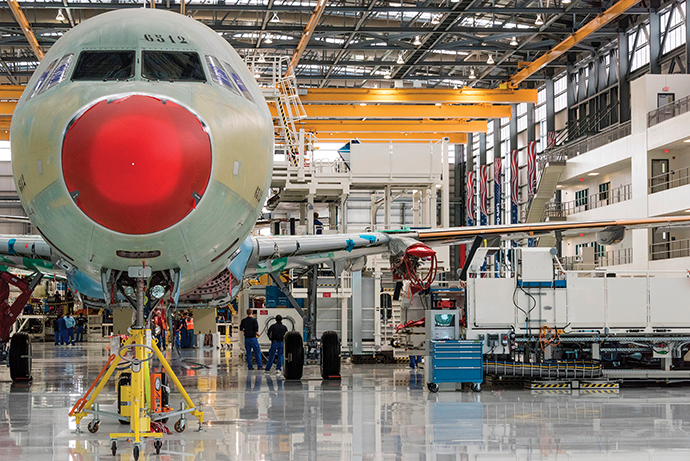 Airbus will assemble up to four A320 family passenger aircraft per month at its Mobile Manufacturing Facility.
Photo courtesy of Airbus Americas, Inc.
by MARK AREND

Airspace over Mobile is busier than usual, now that the Airbus U.S. Manufacturing Facility at the Mobile Aeroplex at Brookley is delivering A321s to Spirit, Frontier, American, JetBlue and Delta Airlines, among other North American customers. Delta picked up its first Mobile-made A321 on December 2nd, the first of many for the Atlanta-based carrier that will be assembled at the $600-million facility where production got under way in 2015. That jet was the 15th produced in Mobile in 2016. The Aeroplex is part of the Mobile Airport Authority’s portfolio of air service properties and the one it plans to turn into an aerospace and transportation-based industrial hub. Airbus is central to that.

Airbus can also assemble smaller A319 and A320 aircraft at the facility; plans call for production of four aircraft per month in 2017 and 40 to 50 aircraft annually by 2018. The assembly operation isn’t the European aerospace giant’s first foray into the Mobile area — it’s the third. Airbus’ Engineering Center with more than 200 engineers and support staff is also at the Mobile Aeroplex at Brookley, and its North American military customer services operation supporting US Coast Guard aircraft is near the Mobile Regional Airport.

When Airbus announced the Mobile Aeroplex at Brookley — a 3,000-acre (1,215-hectare) former Air Force base that had closed in 1969 — as the location for its new assembly facility, suppliers soon followed suit with projects in the Mobile area and the broader Gulf Coast region — already home to a significant aerospace industry cluster. They came to Brookley, too. Labinal, through its Safran Engineering Services subsidiary, was the first, with an engineering support facility that will employ up to 50. Zodiac Aerospace, which makes cabin interiors, was another. Today, the Aeroplex is home to dozens of aerospace and transportation companies involved in air support, MRO, aircraft painting and other services.

Staffing the new facility, even with the new and expanding suppliers, has been problem-free.

“We never had a doubt we’d find the skilled workforce we need to produce our aircraft,” says Jennifer Ogle, head of human resources at the Airbus U.S. Manufacturing Facility. “The Gulf Coast has a strong military presence (currently, approximately 30 percent of the employees we have hired are military veterans who bring a high skill level and work ethic to the table); other aerospace companies in close proximity; and a large amount of people from around the US who could use this opportunity to come home. More than 80 percent of our current hires are from the Gulf Coast Region — Alabama, Florida and Mississippi. A high number of Gulf Coast natives is good for retention and for drawing experienced aviation professionals to come work with us.”

Can Airbus count on that labor supply into the future?

“It’s important to remember that Airbus has had a presence in Mobile for nearly 11 years through our Defense and Space Military Aircraft facility and 10 years with our Airbus Engineering Center in Mobile,” Ogle points out. “From the beginning of our operations here, we have engaged with the schools in our community starting at the elementary level through the middle, high and college levels to encourage the basics (stay in school, improve reading skills) and then interest in STEM subjects in various activities such as mentoring students in robotics competitions (BEST Robotics), encouraging more girls/women to consider engineering and manufacturing careers (Girl Scouts Wing It program, Women in Aviation, etc.).

“With the Airbus U.S. Manufacturing Facility coming online,” Ogle adds, “we are continuing and expanding on those activities. Airbus truly believes we are investing in our future by investing in our future aviation professionals. In addition, Alabama and the Mobile area have a strong focus on workforce development, and we support those agencies and initiatives through direct involvement and having a voice. This includes a renewed focus on optimizing the local aviation college, the advanced Manufacturing Center at Brookley and having AIDT as a partner in workforce development of the future employee base.”

The next chapter in Brookley’s rebirth as an aerospace industry hub is an academic research center now taking shape in vintage 1940s former Air Force base buildings repurposed for research. It’s the Alabama Aviation Innovation and Research Center (A²IRc), the mission of which, as defined by the Mobile Airport Authority, is a public/private partnership that will serve as a nexus for all levels of education, academic disciplines, the arts, workforce development solutions and industry to unite in a truly collaborative space to inspire youth, foster innovation, increase competitiveness and be a beacon for economic development. 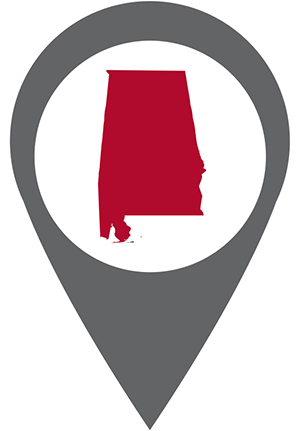 In November, global auto supplier MollerTech began work on a $46.3-million manufacturing facility in rural Woodstock, in Bibb County, a project that will create more than 220 jobs. The 150,000-sq.-ft. (14,000-sq.-m.) factory will supply interior parts for next-generation sports utility vehicles produced at Mercedes-Benz’s Alabama assembly plant in neighboring Tuscaloosa County. It will become the German company’s flagship US manufacturing facility, joining locations in Georgia and Michigan.

Boeing plans to add approximately 400 new jobs to the Huntsville area. The Chicago-based aerospace giant announced that it is taking steps to operate its Defense, Space & Security business more efficiently through facility consolidations and work movements that will increase employment at several locations including Huntsville. The jobs will be in the areas of engineering, advanced manufacturing and administrative support. This consolidation of work into Huntsville is part of Boeing’s ongoing efforts to make the best use of resources and talent as well as grow in the global aerospace market. The company sustains nearly 8,400 direct and indirect jobs in Alabama, according to a recent University of Alabama study.

Two Rivers Lumber Co. plans to invest $65 million to build a sawmill in Demopolis that will create 55 jobs initially and a total of 95 eventually. The new mill, the company’s first, will be located just south of where the Black Warrior and Tombigbee rivers come together, inspiring the company’s name. Two Rivers plans to produce all sizes of Southern Yellow Pine dimensional lumber and market it throughout the United States.