The heartland is getting hipper. 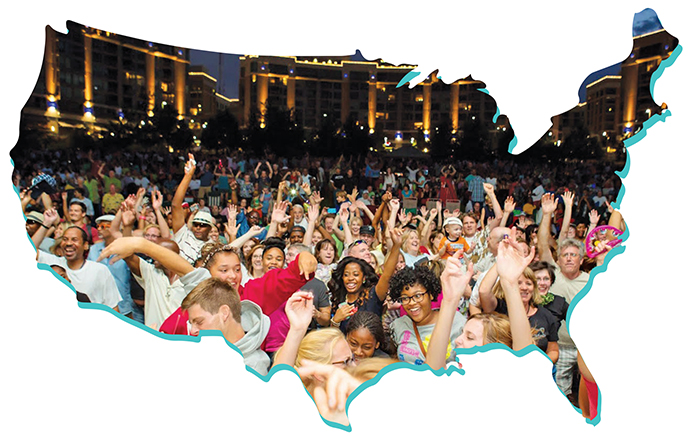 Already trending younger, Downtown Omaha’s next step may be a proposed “makers district.”
Photo by Jason Fischer courtesy of the Greater Omaha Chamber
by GARY DAUGHTERS

We Don’t Coast” is the clever, double-edged slogan adopted by Omaha, Nebraska.

Omaha is one of a growing number of cities in the American heartland that is busy building out creative and digital footprints distinct from coastal tech meccas such as San Francisco, Seattle and Boston.

In its 2016 rankings, which take into account cost of living, Smartasset.com noted that pools of creative talent not only attract like-minded individuals and workers, but that, increasingly, creative types are seeking more affordable places to cluster. That’s just one of the places where the heartland comes in.

Omaha, which has witnessed steady growth in IT jobs since 2010, envisions becoming a nationally-recognized technology talent hub, and hopes to hit 20,000 tech-oriented jobs by 2020. The 4,000 new jobs it will take to get there have the potential, the Greater Omaha Chamber of Commerce believes, to inject close to $1 billion into the Greater Omaha economy.

U.S. News and World Report has ranked Omaha as one of the top 20 places to live in the nation, based largely on costs there. Likewise, Yahoo Finance ranked Omaha 15th on a list of livable cities, noting it “maintains a low cost of living, allowing residents to keep more than 71 percent of their income in their wallets.”

Among those taking note is LightEdge solutions, based in Des Moines, which in 2016 selected Omaha as the place to invest in a fourth facility. The cloud-based data company expects to employ about 30 workers at its new Omaha facility. Other firms announcing major moves into or expansions in Omaha in 2016, according to Site Selection’s Conway Projects Database, included tech-based Ex2 Technology, Acass Systems and Scorevision.

Chicago, while hardly an also-ran when it comes to making things, is nonetheless part of the creative and digital wave in the heartland, having informally branded itself as “capital of the Silicon Prairie.” Perhaps the most vivid illustration of Chicago’s firm foothold on the digital precipice is the Digital Manufacturing and Design Innovation Institute (DMDII), a federally-funded research and development lab that opened in 2014 on the city’s Goose Island.

The lab is run by a consortium led by the University of Illinois, with partners that include Boeing and General Electric and some 70 other universities. It’s been endowed with a $70-million grant from the Pentagon, as well as $250 million in state, local and private funds. DMDII is doing cutting-edge work in areas such as advanced analysis, intelligent machining and advanced manufacturing enterprise, and boasts that its research into such nascent realms will both “demonstrate and apply new digital technologies and accelerate them to market.”

Chicago Mayor Rahm Emanuel, not surprisingly, views the national lab also in local terms, saying DMDII will “ensure that the city of big shoulders remains the city of big discoveries for years to come.”

Salt Lake City is a powerhouse hub west of the Rockies with a Himalayan-sized presence in advanced healthcare that reflects the city’s unique demographics. Becoming more widely known as the pristine hub of the “Silicon Slopes,” Salt Lake City not only boasts of having the highest literacy rate in the country, but also the nation’s youngest workforce, eight years younger than the national average, according to Salt Lake City Demographics.

Thus, the healthcare scene in Salt Lake City has a distinctly youthful bent, offering tech-based products and services geared toward the young as well as the aging.

“The growth here in Salt Lake City has just been phenomenal, just in the past five years,” relates Jeff Selander, chief people officer for HealthCatalyst, a former two-man startup that now finds itself on the cutting edge of the IT/healthcare world. 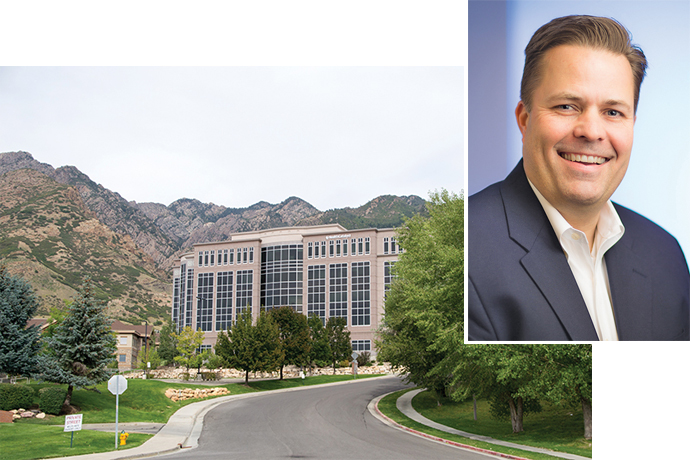 HealthCatalyst has sprouted from a two-person startup to more than 500 staff in Salt Lake City, a place Chief People Officer Jeff Selander (pictured) salutes for its “rich environment” in IT and healthcare talent.
Photos courtesy of HealthCatalyst

HealthCatalyst, founded in 2008, now employs more than 500 workers, and says its data warehouse solutions have impacted more than 65 million patients to date. In early December, it was named the 11th best small or medium sized business to work for by Glassdoor. The company’s client list includes Kaiser Permanente, Stanford University Hospital and Clinics, Partners Healthcare and the University of Kansas Hospital.

“Salt Lake City is a rich environment,” says Selander, “for folks with experience in our industry. What really draws people to us is our mission to help people, which lends itself especially to the young workforce we have.”

Compared with its coastal tech competitors, Salt Lake City offers significantly lower labor and commercial rent costs. According to CBRE, per-sq.-ft. rates in Salt Lake City are less than half those of Silicon Valley and a third of what it costs to rent space in San Francisco.

Iowa: Past the Corn, Please

If you really want to think far afield, think Iowa. Even as it anchors the corn belt, Iowa’s shaking the image of one great big farm.

In July, Iowa City received federal funding to transform a 13,000-sq.-ft. (1,208-sq. -m.) building in the city’s center into a “non-traditional incubator” called the MERGE Innovation Space. The public laboratory, when completed, is to include a prototyping facility focused on “small, highly complex products such as wearable medical devices.” A grant from the Iowa Economic Development Authority is to help fund 3D printing at the lab, which officials say will have some of the highest resolution in the Midwest.

Seven Iowa counties surrounding Iowa City and Cedar Rapids have banded together to form a “Creative Corridor” to help stimulate and incubate startups and “game-changing ideas and inventions.”

Higher Learning Technologies is among the successful startups that have sprung from the corridor in just the past few years. The company, based in Coralville, produces smart-phone apps for student test preparations. Launched in 2012, by 2014 HLT had raised upwards of $6 million in seed money and had education apps cracking the top 10s of Apple’s App Store and Google’s Play store.

“At every turn,” says Steve Kappler, head of Regional Vision Strategy for Iowa’s Creative Corridor, “there’s a company here doing something different. I’m constantly taken aback at the number and quality of employers that are here.”