Networks of Amazon facilities are just one thread in a global supply chain reconfiguring for e-commerce. 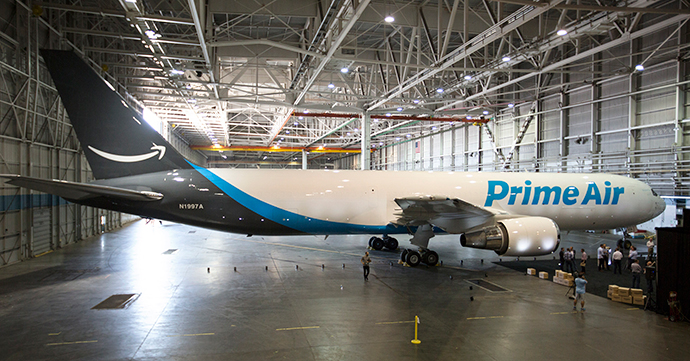 Amazon One, which made its debut at the air show portion of Seattle summer festival Seafair, is one of 40 aircraft that Amazon has agreed to lease through air cargo partners Atlas Air and ATSG.
Photo courtesy of Amazon
by ADAM BRUNS

Just when you thought all the gifts in the world had already been purchased on one website, the site’s proprietor delivered a few more in the form of future facility investments.

On December 20th, at its final meeting of 2016, the Michigan Strategic Fund approved projects that included Amazon’s plan to open a large volume product fulfillment center in the City of Livonia, investing nearly $90 million and creating 1,000 jobs initially when the facility opens in October 2017. Ashley Capital is building and leasing the mega-distribution facility on land that previously was home to a GM Delco Chassis plant, after purchasing the brownfield site from RACER Trust in 2015.

Michigan was chosen over competing sites in Indiana and Ohio. But not Illinois. That’s because — also on December 20th — Amazon, Intersect Illinois and the Illinois Department of Commerce announced that Amazon plans to open two fulfillment centers in Aurora, Illinois. The facilities will add more than 1,000 additional full-time jobs.

During the past two years, Amazon has announced eight fulfillment centers in Illinois. Once the latest investments complete construction, Amazon will have created more than 7,000 full-time jobs for Illinoisans. 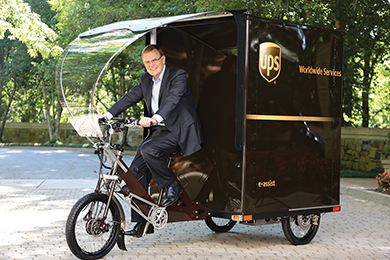 UPS in November followed up its pilot project in Hamburg, Germany with the rollout of the first eBike — an electrically-assisted tricycle — in Portland, Oregon, in November. The company anticipates the eBike prototype (here steered by UPS Chairman and CEO David Abney) could become a component of its last-mile delivery capabilities in other cities across the country.
Photo courtesy of UPS

Independent studies have found that fulfillment center jobs pay 30 percent better than the retail shop jobs that giants like Amazon are making disappear. Moreover, Amazon’s Career Choice program, since its launch four years ago, has pre-paid most tuition for courses related to in-demand fields, regardless of relevance to Amazon’s business, for more than 7,000 employees.

Another state now hosts eight Amazon centers too: In August, the company announced it would build a second facility in Coppell, Texas. Amazon currently employs more than 10,000 full-time hourly associates at its current Texas fulfillment centers and plans to create hundreds more full-time positions at this second Coppell location. The company also fills orders at facilities in Haslet, Dallas, Fort Worth, and Schertz, with facilities in San Marcos and Houston currently under construction.

Maybe the state’s airports will be a rising factor too. That’s because Amazon’s going to lease 40 cargo aircraft. Eleven are currently flying, with more coming online over time as the business volume and global network of fulfillment centers (nearing 130, along with 20 sortation centers) keeps growing.

Other recent announcements include a third Nevada center, where more than 1,000 jobs will be added to the company’s current payroll of more than 1,500; and facilities in Davenport, Lakeland, Miami and Jacksonville, Florida. Across the whole network in the US, Amazon in October committed to creating more than 120,000 seasonal positions at facilities in 27 states. While some denigrate those jobs as glorified temps, the company points out that some stay on.

“Last year alone, more than 14,000 seasonal employees stayed on in regular, full-time positions after the holidays,” said Mike Roth, Amazon vice president of Global Customer Fulfillment, “and we expect to increase that number this year.”

At UPS media day earlier in 2016, Chairman and CEO David Abney addressed that very topic: “Amazon is a big customer of ours,” he said. “It is a mutually beneficial relationship.”

And just as DHL is making major investments in Chinese cities (where e-commerce is booming like nowhere else), its home country of Germany and US locations in Chicago, FedEx’s backyard in Memphis and Amazon’s backyard at Seattle-Tacoma International Airport, UPS is making major facility investments too. The biggest are unfolding in Corbeil-Essonnes/Evry, France, south of Paris (950 employees and $108 million, part of $2 billion being invested in Europe through 2019); Lummen, Belgium; Jacksonville, Florida (1,500 jobs); Columbus, Ohio ($175 million); and in its hometown of Atlanta, where a $400-million, 1.2-million-sq.-ft., 1,250-job hub will soon rise on a 341-acre site in Fulton County in south Atlanta.

“Our company is 109 years old, and we’ve reinvented ourselves many times over those 109 years,” said Abney last summer. “Now, we really feel we’re a technology company. There are over 21 petabytes of information in our system. Take the DNA of every single person on the earth, and we’d still have space available on our network.”

One way they’re using it is to “bend the cost curve, especially with e-commerce, to reduce the cost per package. E-commerce was going to happen with or without UPS, right? We had to change our network to adjust to the trends we were facing.”

Some retailers are competing with e-tailers by starting to use their stores as warehouses, feeding from 100 sites instead of two or three big facilities. “That has changed our network,” he said. “It shortened distance traveled in many cases. At the same time, it’s opened up more packages for us. It’s a big change for us, but when you see what’s going to be happening the next few years, those are changes our network is flexible enough to be able to do.

“Technology is really a foundation for our growth initiatives,” said Abney. “It’s now so ingrained that we think of the network as this total, integrated composite of multiple networks.”