Ports Are in a Storm,

but Central America will help the region find smoother water in 2017. 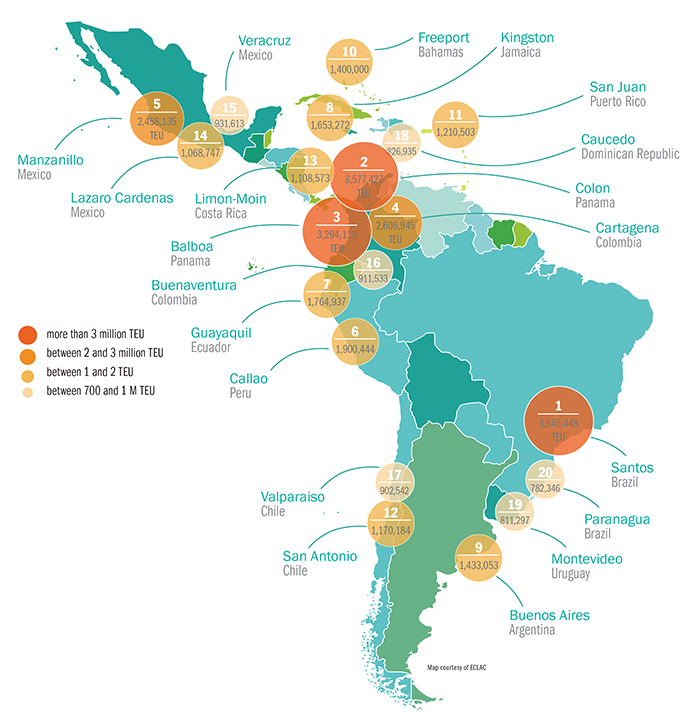 Those seeking business intelligence and data from regions of the world where it’s sometimes hard to come by often turn to experts at brokerages and consultancies, from Deloitte and EY to NAI and CBRE. They can also turn to public-policy and economic organizations charged with tracking the region and its data.

One of the latter is the UN’s Economic Commission for Latin America and the Caribbean (ECLAC), whose recent reports and data shed light on location and commerce trends.

TEU: The standard unit of measurement, equivalent to a container or 20 feet, (6.25 meters)

In November, ECLAC reported that throughput of containerized cargo at ports in Latin America and the Caribbean fell by 2.9 percent during the first half of 2016, part of what it called a “deepening trend down” for the region after weak growth rates of 0.8 percent in 2014 and 1.7 percent in 2015. “This is the result of a slowdown in foreign trade, mainly reflected in a fall in activity [at container terminals] in some countries of the region and a loss of market, [due to] competition from other routes, in some major transshipment ports in Panama and Colombia.” Total volume for the first half of 2016 was an estimated 23 million TEUs.

Thirteen of the 30 most important container ports in the region recorded declines in traffic. The data collected show that the total volume of traffic in the first 30 ports — more than 80 percent of regional container port traffic — decreased by 3.7 percent in the first six months of 2016, with significant drops in Panama (-12.8 percent), Colombia (-11.1 percent), Brazil (-3.9 percent) and Argentina (-5.1 percent).

However, the statistics from all 70 of the region’s ports show 5-percent growth across all Central America ports (excluding Panama and Belize). And while there was a slight drop of 0.5 percent at Mexican ports overall and a drop of 4.1 percent at ports on the East Coast of South America, the West Coast of South America grew by 4.8 percent. That includes Peru and its Port of Callao. 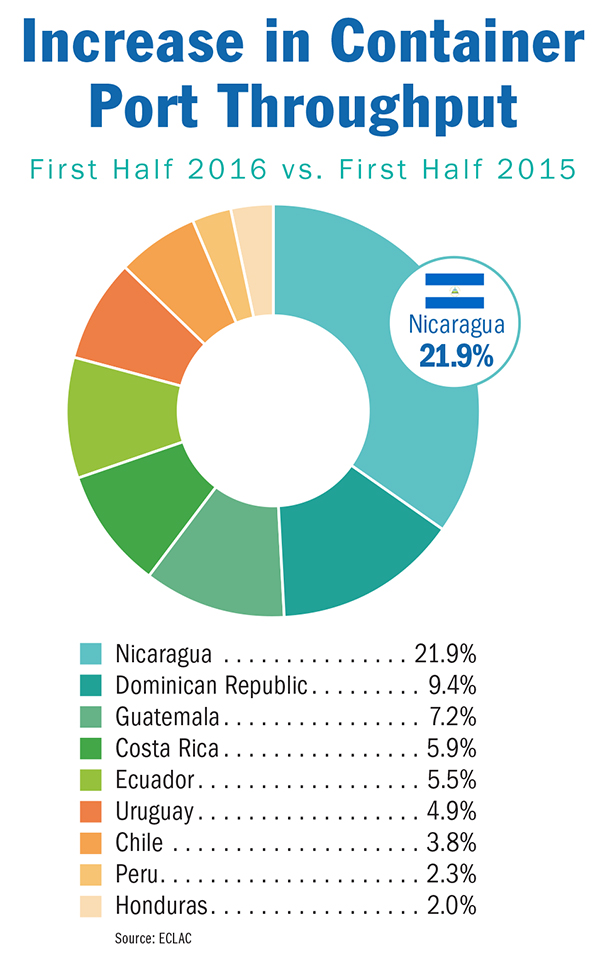 “The Port of Callao is being transformed to become the new center of trade and development for Peru and the entire Latin American region,” said Julio Valeriano, project manager at JJC General Contractors South America, which recently installed three MTU Onsite Energy 20V 4000 generator sets there as backup power.

A mid-December release from ECLAC stated that, after two consecutive years of economic contraction, Latin America and the Caribbean will experience a modest growth of 1.3 percent in 2017.

“We are at a turning point,” said ECLAC Executive Secretary Alicia Bárcena during a press conference in Santiago, Chile. “Latin America and the Caribbean will resume growth but moderately and without clear engines driving it. Its recovery will be fragile as long as the uncertainties of the economic context continue, particularly the recently observed protectionist trends.”

That trend will continue in 2017: While South America and the Caribbean are forecast to grow by 0.9 percent and 1.3 percent, respectively, Central America is forecast to expand by 3.7 percent.