The Race For The Workforce of Today 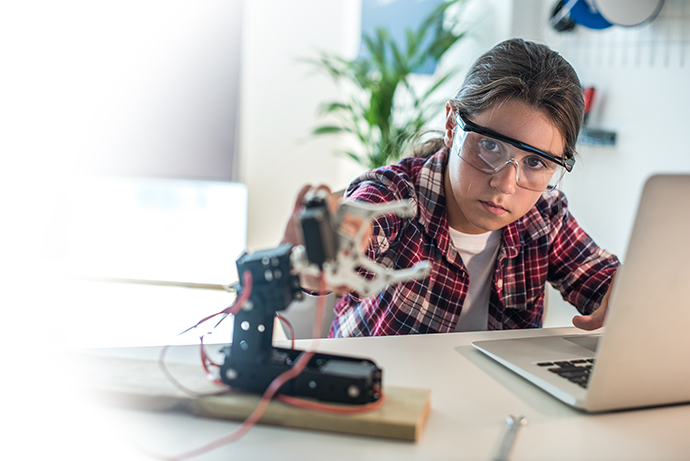 If stock car racing was born in Tennessee, as reliable legend has it, then maybe it’s simply fitting that the Volunteer State is leaving business competitors in its dust.

In addition, Tennessee tied for fourth in Site Selection’s recent 2016 survey of state business climates (Georgia was No. 1). 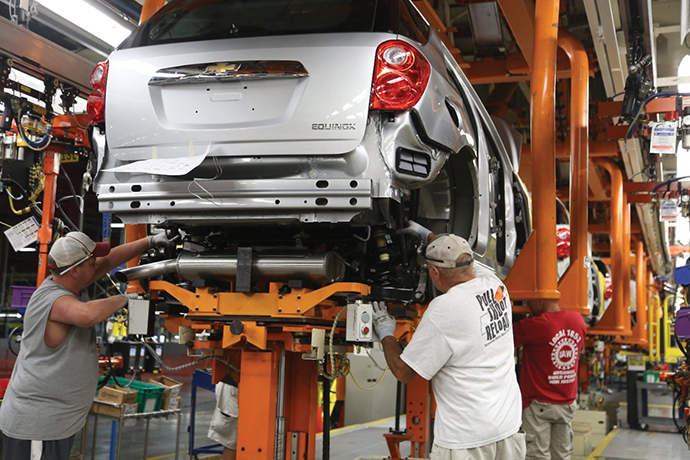 But as a detailed analysis of the Tennessee workforce confirms, having a solid business climate presents challenges unto itself. One of those faced by Tennessee, like so many other local, state and regional economies, is to build and sustain the modern labor force it needs to cross the finish line — which some might call the starting line for the future.

Tennessee’s annual LEAP (Labor Education Alignment Program) analysis, released in November, points clearly, maybe tellingly, to well-paying openings in the state’s advanced industries. It identifies 255 occupations that are currently in high demand, as defined by the numbers of postings and hires for specific job classifications relative to the jobs spectrum as a whole.

“Tennessee is seeing a lot of growth in advanced industries that follows on a generation of much less technical, advanced enterprise.”
— Mark Muro, Vice President, Senior Fellow and Director of Policy, Metropolitan Policy Program at Brookings Institution

“Tennessee is seeing a lot of growth in advanced industries that follows on a generation of much less technical, advanced enterprise,” says Mark Muro, senior fellow and director of policy at the Metropolitan Policy Program at Brookings. “That means that the statewide skills upgrading needed in the state is more pronounced than elsewhere.”

The LEAP analysis points to needs and possible workforce gaps across the state’s nine geographic regions in skilled job sectors that include but aren’t limited to: 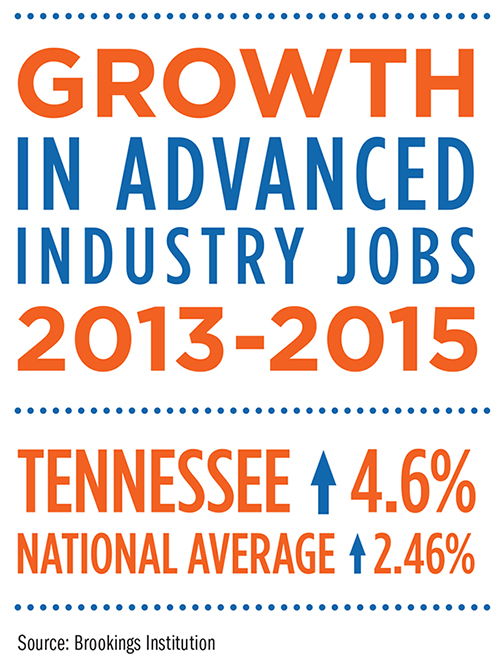 According to the LEAP analysis:

Tennessee’s on-going efforts at education, workforce training and jobs matching get high marks, but the climb is a steep one, analysts say.

“I would say that Tennessee has focused as hard on these issues as any other state,” says Muro. “With that said, the challenge is huge here, and there is evidence of very tight labor markets, positions being hard to fill, and persistent skills match problems.

“Remember,” reflects Muro, “this is a state that faces not just the normal skills challenge but the need to structurally reposition itself from a more agrarian, commodity manufacturing history to participation in the global advanced sector. So, the need to up its game is urgent.”

As the acronym implies, LEAP is a state-run program that helps Tennessee communities and colleges align educational degrees, certificates and course offerings with the needs of the state’s workplaces. It’s one of a potent array of pipelines Tennessee Governor Bill Haslam has secured to funnel money into higher education to keep pace with the boom in skilled employment opportunities. 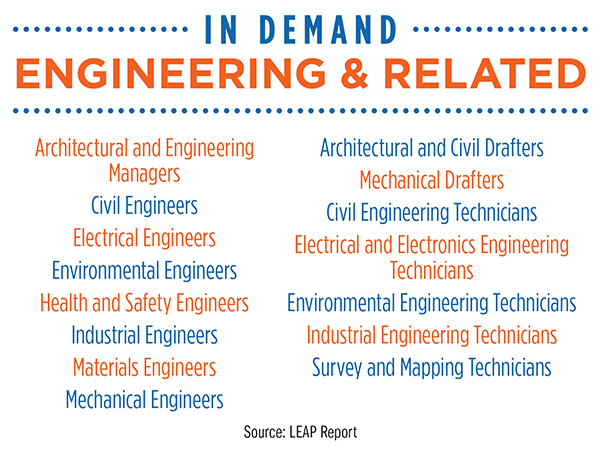 Because of Tennessee’s advanced industrial orientation, the 2016 LEAP analysis places special focus on tracking possible gaps between STEM-related job openings and qualified workers to fill them. In addition, it identifies in copious detail existing programs of postsecondary study, by region and specific location, linked to four critical areas that are both in-demand and heavy on STEM-skilled workers:

The analysis, done in conjunction with the Center for Economic Research in Tennessee (CERT), is aimed at, among others, policy-makers throughout Tennessee who are tracking the evolution of workforce demand.

Among the many factors boding well for the Volunteer state: In the race to educate the workforce of the future, Tennessee is laps ahead of much of the competition. On education, Gov. Haslam has put the pedal to the metal, and he’s got the state legislature backing him up like a pit crew. 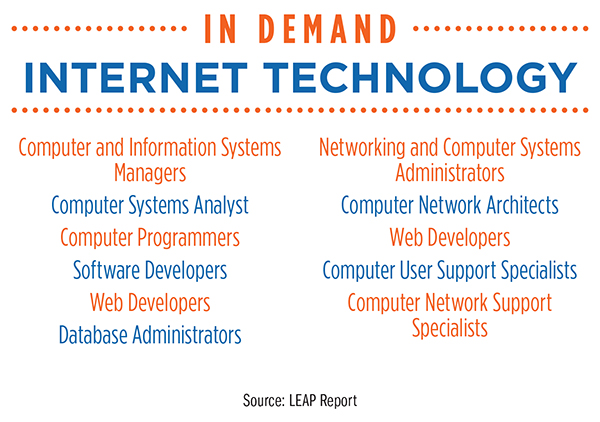 In 2016, Haslam asked for and received $261 million for public education, the highest K-12 investment without a tax increase in the state’s history, he said. In his plea for more from lawmakers, he highlighted some of what he’s tackled so far.

In the increasingly critical postsecondary realm, Haslam persuaded state lawmakers to approve $10 million for LEAP, and even more for his other two higher-ed pipelines:

At 4.8 percent as of October, Tennessee’s unemployment rate, as tracked by the U.S. Bureau of Labor Statistics, was a tick below the national average of 4.9 percent. The state’s rate of job creation in 2016, 2.4 percent, ranked among the nation’s highest. Haslam boasts of boosting private-sector employment by 16 percent since the start of his administration in 2111.

Its workforce development challenges aside, Tennessee continues to expand working capacity across advanced industry sectors. According to Site Selection’s proprietary Conway Projects Database, General Motors and Google were among the biggest investors in new projects in Tennessee in 2016.

As previously chronicled in Site Selection, Google cemented plans to build a $600 million data center at a former TVA megasite in Clarksville, a project expected to create about 70 full-time jobs. GM, already a major investor in Tennessee, announced two separate expansions at its Spring Hill facility totaling $937 million. The projects unveiled in February and October will open the Spring Hill plant to V8 production for the first time and support the development of new, high-efficiency engines. Together, the two projects are expected to create close to 1,000 new jobs.

Upwards of a dozen people lost their lives in the inferno. Flames destroyed entire hilltop neighborhoods. The fires, officials said, burned 17,136 acres and destroyed, damaged or affected roughly 2,460 structures across surrounding Sevier County. Two teens were arrested in connection with the blaze after having purportedly tossed lit matches on a trail in the park the afternoon the fire began.

Some popular tourist spots were not as lucky, though. Gatlinburg’s Alamo Steakhouse & Saloon, which backed up to forestland, burned to the ground during that hellish Monday night. Alamo, part of a 10-restaurant chain owned locally by Johnson Family Restaurants, had 45 employees, according to a company spokesman, Dan Powers. 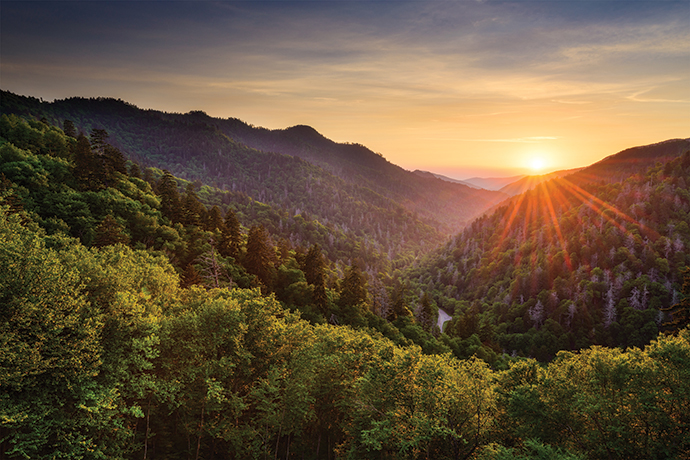 Before the tragedy: sunrise over Gatlinburg
Photo: Getty Images

Now, laments Powers, “they’re all out of a job.”

For those 45 restaurant workers there is some solace, though, as their full salaries will be covered for up to a year, according to another company official, Melina Williamson, who also spoke briefly with Site Selection.

“Thank God all our employees were accounted for,” Williamson says, adding that company officials went out during the fires to try to track down employees and to make sure they were safe. At least three of those employees, says Williamson “lost it all.”

Some of the Alamo workers, company officials are hoping, can be absorbed at other nearby locations owned by Johnson Family Restaurants, which is owned by Kelly Johnson and was founded by her father, Bruce Johnson.

That temporarily idle employees still will get paid is not due to mere largesse on the part of the employers. In an interview, Kelly Johnson indicated her father had quietly taken precautions against just such an event as the ruinous fire. Kelly Johnson told the Knoxville News-Sentinel:

“Many years ago, we purchased business interruption insurance, and it covers something called ordinary payroll. It even covers tips for the servers. Many businesses don’t carry this insurance because it is cost-prohibitive, but my father is a big believer in over-insuring. He has always said to get more than you think you need. The ability to pay our employees during this time comes back to his good foresight,” Johnson told the News-Sentinel.

The holiday season from hell

Even though Gatlinburg’s main drag was largely and luckily spared, the fire still was a body blow to the picturesque town, coming as it did with such vivid, visual force and doing so right in the middle of the lucrative Christmas holiday season. It was hard to tell which hurt worse, the town’s spirit or its holiday bottom line. Days after the tragedy, Gatlinburg’s usually merry gathering spots smelled of soot and ash, and some of its restaurants stank of rotting food before bewildered employees could clear it all out at costly losses. At a December 13th news conference, authorities said the suspected arson had caused more than $500 million in damage. 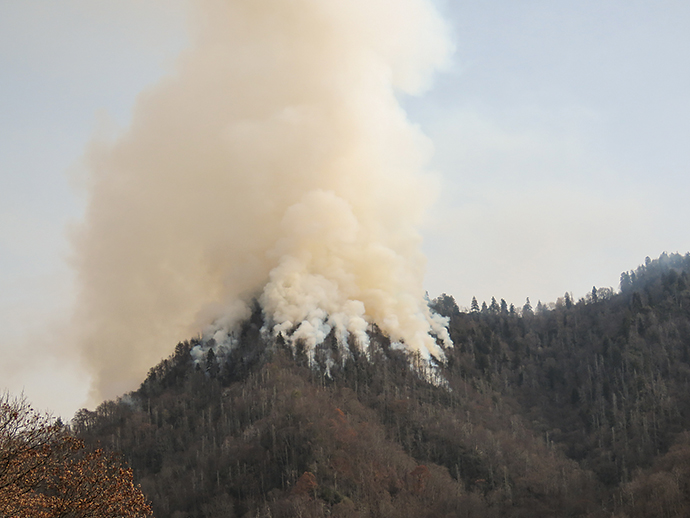 Sevier County native Dolly Parton, the country mega-star, held a live-streamed telethon for Gatlinburg that raised millions of dollars’ worth of pledges, she announced afterward. Melina Williamson of Johnson Restaurants expressed amazement at some of the gestures of generosity she had witnessed.

“People have tried to donate everything. Clothes, cars. Everything. It’s crazy,” said Williamson.