The Innovation Infrastructure You Can’t See 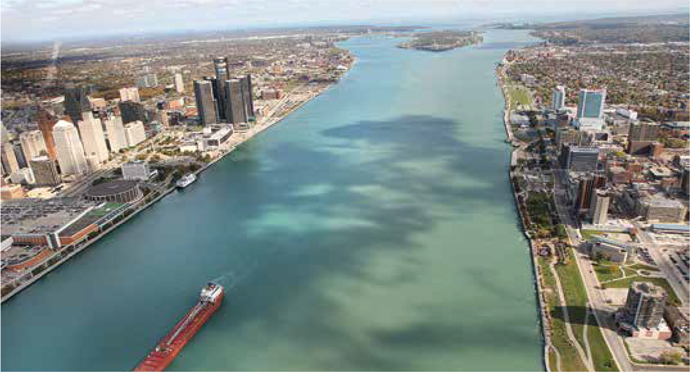 The Detroit River separates Windsor-Essex, Ontario, on the right, from Detroit, Michigan. This region is the busiest US-Canada trade corridor.
Photo courtesy of WindsorEssex Economic Development
by MARK AREND

The only major American city north of the border with Canada — Detroit, Michigan — is only one half of the busiest commercial US-Canada border crossing. The other half, Windsor-Essex, Ontario, is the only major Canadian metro south of the US border. More importantly, it’s a powerhouse industrial center with established industry clusters in the automotive, advanced manufacturing, life sciences, agri-business/food processing and logistics and warehousing sectors.

One-third of all Canada-US trade crosses the Windsor-Detroit border, much of it across the Ambassador Bridge and four other surface crossings. A new bridge across the Detroit River, named for the late Canadian hockey great Gordie Howe, is scheduled to open in 2020.

Transportation manufacturing can be found elsewhere in Ontario, but no other location has Windsor’s longevity, infrastructure or breadth as a center of automotive research, design, assembly and export. It’s Canada’s Motown.

Consider the region’s automotive assets by the numbers: 13,000 direct jobs. More than 70 manufacturers, including two OEMs — Ford Motor Co. operates two engine plants in Windsor and Essex in addition to its Global Powertrain and Engineering and R&D Centers in town. Ford is investing almost $700 million for a new engine program at the Essex plant.

Fiat Chrysler Automobiles Canadian headquarters is in Windsor, where it has invested $3.7 billion — it builds Pacifica minivans at its retooled Windsor Assembly Plant. FCA’s R&D center is at the University of Windsor, which is home to the Centre for Engineering & Innovation. 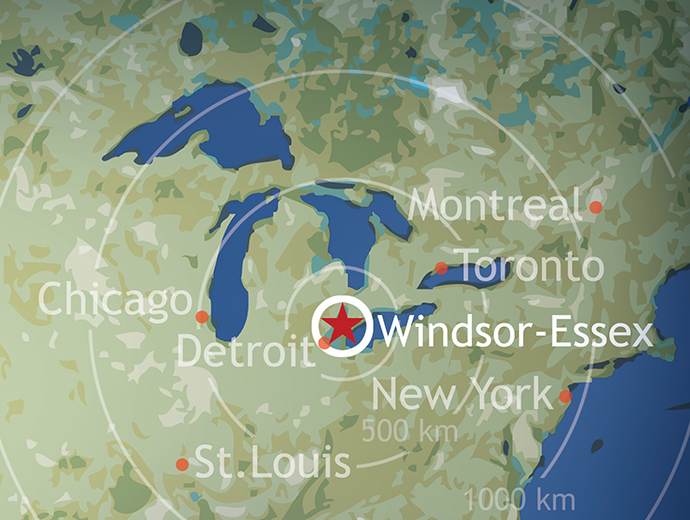 Proximity to Detroit or not, the Windsor-Essex region’s automotive industry ecosystem is much more — and in some ways less tangible — than the typical assets one would find in manufacturing centers, such as assembly, R&D assets and a growing supplier base. Like a coral reef, it’s the innovation expertise that has been there all along and is simply added to as synergistic sources of nourishment come on the scene and spur growth in new, related directions. There have long been support businesses — machine, tool and die manufacturers, line builders and machine integrators, for example — to the Windsor-Essex region’s transportation manufacturing sector. Today, there are more than 250, some of which have been fixtures in town, expanding and defining the reef, for decades.

Like CenterLine. This maker of welding and assembly automation systems and components has been headquartered in Windsor since 1957 and operates three manufacturing facilities there, and others in Mexico, Germany, Brazil, China and India. “This city is one of the best kept secrets in the country,” says Phil Campbell, CenterLine’s vice president of sales. “It has tremendous upside potential.”

Southern Ontario, especially the Greater Toronto area a few hours northeast of Windsor-Essex, and nearby southeast Michigan are home to numerous OEMs and suppliers of all sizes, including Magna International in Aurora, Ontario, near Toronto. “We’re in a sweet spot in terms of decision-making dynamics, in terms of where machine tools will be sourced and for which programs — anywhere in North America, not just in our backyard.”

How and Where To Thrive

CenterLine’s six-decade history in Windsor has been augmented by more than 80 patents, some of which, including a widely-used nut welding head, today are standard tools and methods used in machinery made by other suppliers to the transportation manufacturing industry. “Those processes are synonymous with CenterLine,” says Campbell, as is innovation itself. “Our innovation cycles are pretty quick. Not only do we integrate robots and make automotive components, we invent a lot of the things that go into those manufacturing lines. Companies that do what we do will buy the subcomponents we make and integrate them into their own systems. Usually, the end users require that.”

The company has expanded in Windsor over the years in part because its “cultural DNA” links it inextricably to the community in which it came about and to the families that are part of that history. “The owners are driven by loyalty to their employees,” says Campbell. “That may be a rarity in today’s world, but the reverse is also true. The average employee tenure is about 16 years — many have worked for CenterLine their entire lives.”

That personal connection is not unique to CenterLine, says Campbell. It’s easy to find throughout the Windsor-Essex region. “If you embed caring people into your business, they usually infuse the business with that attitude, and they will execute better in their roles.” The region’s labor market, in general, is “collaborative,” says Campbell, and not prone to friction in the workplace. With respect to cross-border commerce, “there are no impediments,” particularly with NAFTA so well entrenched now. 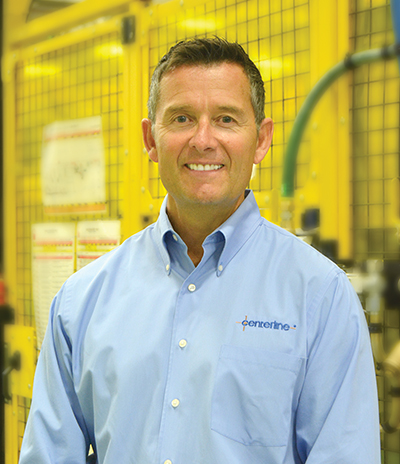 “This area has a very strong business culture and a mindset of innovation, continuous improvement, technology advancement — all the things that matter in successful commercial relationships.”
— Phil Campbell, Vice President of Sales, CenterLine (Windsor) Ltd.

The story of Windsor-Essex that Campbell says needs to be told has more to do with the human resources in place than with its advantageous location on a busy trade corridor with the US.

“This area has a very strong business culture and a mindset of innovation, continuous improvement, technology advancement — all the things that matter in successful commercial relationships,” he asserts. “What business leaders in other locations need to know when considering this area is that it’s about who you’re dealing with and the mindset of the community here. Ultimately, it’s people that generate results and success — not the locations necessarily. You can thrive here with the right leadership.”