Advancing perceptions may be the hardest part of advanced manufacturing. 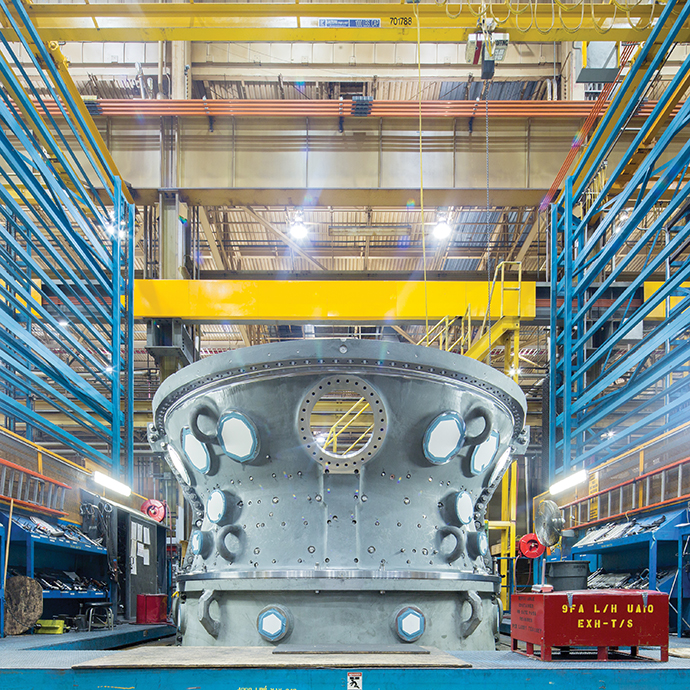 “Advanced manufacturing brings a convergence of the latest technologies together to transform every aspect of the production process to make new, better things, faster. Industrial innovations, from new materials science, 3-D printing (additive manufacturing) and automation to advanced software platforms and robotics are redefining manufacturing for the future.”

That company is a little outfit called GE (whose power plant turbines made in Greenville, South Carolina are pictured above). And it’s betting a lot on the promise of that future: “Recent research found that nearly 24 million people are already employed in advanced manufacturing industries in the US, creating about 19 percent of GDP,” the company reported in a recent newsletter, “and that each job in an advanced manufacturing industry supports another 3.5 jobs through the supply chain.”

The supply chain of one advanced manufacturer in particular is leaping into the headlines, as the founder of Apple supplier Foxconn (Hon Hai Precision Industry, based in Taiwan) has stated he wants to build a US electronic display panel manufacturing complex in which he plans to invest $7 billion, with another $3 billion potentially coming to other investments in the US. The move comes after the electronics giant acquired Japan’s Sharp Corp., and at the same time as the company attempts to bid for Toshiba’s semiconductor business.

“Our investment in the US will focus on these states because they are the heart of the country’s manufacturing sector,” Foxconn founder Terry Gou told investors, according to a Bloomberg report. “We are bringing the entire industrial chain back to the traditional manufacturing region of the U.S. That may include display making, semiconductor packaging and cloud-related technologies.”

During its annual general shareholders’ meeting in Taiwan in June, the company posted documents describing a political and economic landscape that’s seen globalization slow down and the erection of trade barriers speed up: “We must further strengthen the Group’s global strategic footprint. In the future technology industry, we need to move closer to our customers and help them achieve faster time to market to create a win-win scenario.”

Reports from the Associated Press and Bloomberg cited remarks from Gou that alluded to a decision to come soon in the US, among seven states: Texas, Ohio, Illinois, Wisconsin, Pennsylvania, Indiana and Michigan. One report said North Carolina is in the mix too.

“We are bringing the entire industrial chain back to the traditional manufacturing region of the U.S. That may include display making, semiconductor packaging and cloud-related technologies.”

According to the Associated Press, the company wants two sites: one around 400 acres and the other around 1,000 acres. Gou has said the investment may generate a total of close to 50,000 jobs. He has been in direct contact with the White House and many governors. One of those governors, Michigan’s Rick Snyder, in late June was urging state legislators to approve special incentives for Foxconn when they meet in July.

According to a Reuters report, Gou said at the shareholders meeting, “In the US, the state governors’ sincerity and confidence to attract investment … is beyond my imagination.”

Shine On in Kentucky

In the meantime, Apple wants to support other manufacturers with plans to grow. The Cupertino, California–based giant, freshly moved into its new spaceship headquarters, plans a $1-billion fund to invest in US companies that perform advanced manufacturing, CEO Tim Cook announced during a CNBC interview. He also noted that the company would have to borrow to create that fund ... unless tax reform that includes repatriation of overseas profits at a much lower tax rate is enacted.

The first installment of that Advanced Manufacturing Fund was announced in May, when Apple said Corning Inc. will receive $200 million. The investment will support Corning’s R&D, capital equipment needs and glass processing, primarily at Corning’s 65-year-old facility in Harrodsburg, Kentucky, where the partnership involving the manufacture of Gorilla Glass has either created or helped sustain 400 total jobs.

“This partnership started 10 years ago with the very first iPhone, and today every customer that buys an iPhone or iPad anywhere in the world touches glass that was developed in America,” said Jeff Williams, Apple’s COO. “We’re extremely proud of our collaboration over the years and we are investing further with Corning, who has such a rich legacy of innovative manufacturing practices.”

“Corning’s longstanding relationship with Apple has not only led to significant glass innovations that have enabled new capabilities for consumers, it has also helped create nearly 1,000 American jobs and allowed us to continue growing and expanding in the US,” said Wendell P. Weeks, Corning’s chairman, CEO and president. “This investment will ensure our plant in Harrodsburg remains a global center of excellence for glass technology.”

Peril and Promise in the US

A 2017 survey by Deloitte and The Manufacturing Institute of US public opinion of manufacturing paints a bleaker picture, as older workers retire and the sector faces a shortage of 2 million workers within the next decade. US citizens value it, but not enough to pursue careers in it. Among the survey’s top 10 opinions:

Accompanying the survey were more promising insights drawn from federal statistics, the Kaiser Family Foundation and Deloitte’s own research:

The survey followed last year’s release of the 2016 Global Manufacturing Competitiveness Index report from Deloitte Touche Tohmatsu Limited (Deloitte Global) and the Council on Competitiveness. Among its findings, the US improved its ranking from 4th in 2010 to 2nd, and is expected to reach number one by 2020.

The report also singled out the Mighty Five Asia-Pacific nations of Malaysia, India, Thailand, Indonesia, and Vietnam in terms of rising competitiveness, but didn’t use “advanced” in describing their value proposition: “Low-cost labor, agile manufacturing capabilities, favorable demographic profiles, and market and economic growth are leading factors likely to position these countries to rise in rankings by 2020,” said the report, as Brazil, Russia and most European nations outside leaders Germany and the UK lag.

The Mighty Five of Southeast Asia don’t include Australia. But that doesn’t mean the continent and its cities aren’t part of the region’s advanced manufacturing play.

“Two projects, one in production and the other in development, are equipping Melbourne with new innovation districts,” said the ICF announcement. “The Advanced Manufacturing Precinct at RMIT, a public research university, creates collaborative projects between researchers and industry, and equips them with technology and equipment to speed up prototyping and design of the manufacturing process. Early results include a 3D printed spine implant and an improved car seat for the Tesla Model S.

“The Carlton Connect Initiative (CCI) aims to bring together people from diverse disciplines to one precinct, where CCI will create and curate partnerships between research and industry locally, nationally and globally. It has established the Melbourne Accelerator Project, whose 24 startup teams have already created 150 jobs and generated A$10 million in revenue. LAB-14 is CCI’s first small-scale demonstration site, where 270 people are at work on projects from computing through artistic creation. When CCI is complete, it will be Australia’s largest innovation district and home to the Melbourne School of Engineering.” 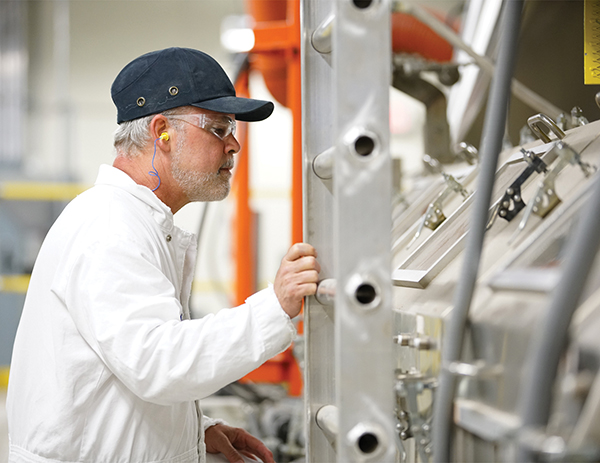 Corning’s glass plant in Harrodsburg, Kentucky is the recipient of a $200-million investment from Apple’s new Advanced Manufacturing Fund.
Photo courtesy of Apple and Corning