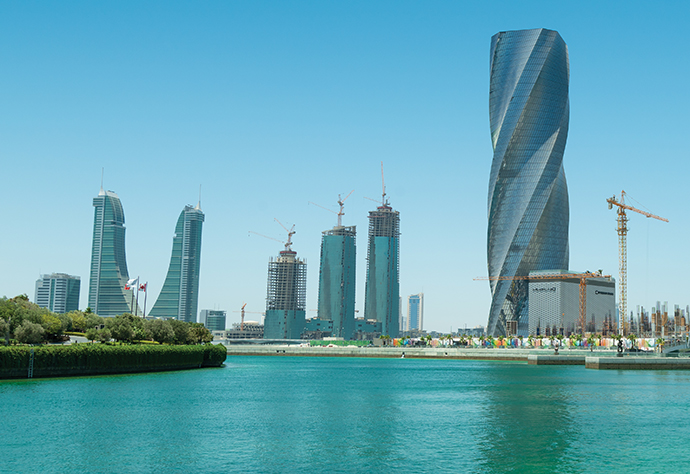 Manama’s United Tower, home to the Wyndham Grand Manama hotel, is a striking addition to the city’s emerging skyline.
Photo courtesy of Bahrain Economic Development Board
by GARY DAUGHTERS

Everyone in Manama seems busy these days.

By the time the sun is up, workers are whipping up dust along busy King Faisal Highway, the seaside boulevard where lanes are being added to handle increasing traffic through the city’s sleek financial district.

Across the way, gigantic yellow cranes are in motion, adding new structures to the city’s impressive skyline, whose current star is the 50-story Bahrain World Trade Center, an imposing duo of towers somewhat startlingly linked by functioning wind turbines.

The most daring new addition is the building one Manaman calls “the Twizzler,” the spiralling 47-story United Tower, which grandly twists around itself and shares the attractive sea green hues of the nearby Financial Harbor Towers. Designed by Manama-based Aref Sadeq Design Consultants, United Tower will house the five-star Wyndham Grand Manama, scheduled to open this fall. Across a small bay, the newly-opened Four Seasons is shaped like an “H” and overlooks the Arabian Gulf from a reclaimed island.

Bahrain is in the midst of a building boom.

“If we look at the overall investment pipeline in the country,” says Dr. Jarmo Kotilaine, Chief Economic Advisor at the Bahrain Economic Development Board, “we’re probably looking at an investment that’s comparable to the size of the country’s GDP, which is a big number. It’s unprecedented.”

As throughout the energy-rich, six-member Gulf Cooperation Council (Bahrain, Saudi Arabia, Kuwait, Qatar, Oman and the United Arab Emirates), infrastructure spending is a primary driver of economic growth in Bahrain; according to the Bahrain Economic Development Board (EDB), the total infrastructure pipeline to support the country’s ambitious buildout totals $32 billion, financed through a mixture of government spending, regional development funds and private sector investment.

The infrastructure expansion includes new roads and bridges, hospitals, clinics, water projects, a renewable energy program and, among other signature improvements, a $1.1-billion expansion and upgrade of Bahrain International Airport. This is a country in a hurry.

“We’re looking at projects,” says H.E. Khalid Al Rumaihi, the EDB’s Chief Executive, “that are quick to construct, and will deliver benefits.”

And that’s the just the public side. Amin Al Arrayed, CEO of First Bahrain Real Estate Development, says the time is ripe for commercial construction, as well.

In the capital city of 548,000 people, 15 luxury hotels are under construction, with five to open before year’s end. Bahrain Bay, an elegant hotel, residential and entertainment center, is moving forward again, with The Avenues, a high-end, $50-million shopping complex, set to open this year. Already home to the Four Seasons, Al Baraka Bank, investment firm Arcapita and United Tower, Bahrain Bay is awaiting the opening of Water Bay, a stunning residential development spread across three 10-story towers. Bahrain Breeze, another upscale residential project, is coming soon, as is the local headquarters for insurance company Axa.

Still, Al Arrayed believes the infrastructure projects being undertaken by the government are the most important part of the equation. The airport expansion, planned to be completed by 2020, is “critical,” he says, as is the planned construction of a second causeway to link Bahrain to eastern Saudi Arabia.

“Bahrain is an island nation,” says Al Arrayed. “The only way to get here is through the air or the causeway [to Saudi Arabia]. Any improvement in those two really will have a positive effect across the economy.”

“We are building six towns at the same time,” says Al Hamer. “This reflects the seriousness and speed we are working with. Basically, we’re building towns covering the whole of Bahrain.”

Al Madina Al Shmaliya, also known as Northern Town, is being built on 10 reclaimed islands west of Manama, and is designed to support nearly 100,000 residents. Covering more than 1,800 acres, the enclave is to include free-standing housing units, apartments, villas and townhouses. It will have its own university, a business district, beaches, public transit, green areas and walkways. Five bridges are to connect the smattering of small islands.

“We are covering about 60 percent of the total cost of each unit, says Al Hamer, to the tune of up to 105,000 Bahraini dinars ($280,000), and subsidizing the no-interest mortgages needed to cover the rest.”

“Over time,” says economic advisor Kotilaine of Bahrain’s EDB, “what we will see is the emergence of diverse communities with their own hubs for services. For now,” says Kotilaine, “it’s very clear that the construction sector is serving as a very important growth driver. It’s growing at a very brisk pace.”