Manufacturing production has been growing in Indiana at four times the national average since 2000, a new study from Ball State University shows. 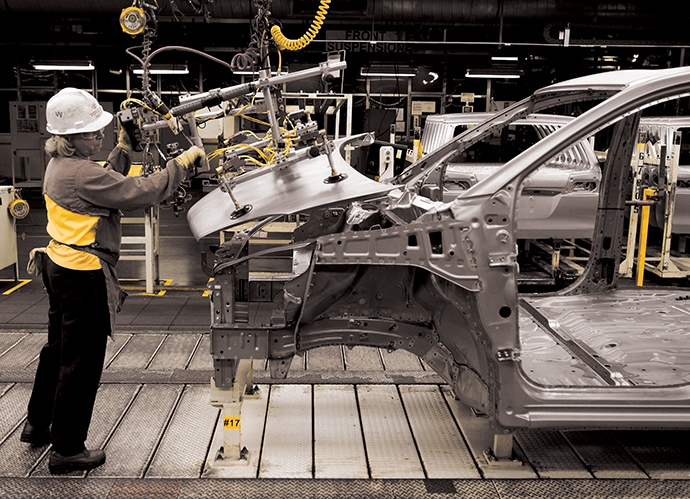 Workers at the Toyota Motor Manufacturing Indiana plant in Princeton assemble the Highlander SUV. A new investment into this plant will sharply increase production of the Highlander by 40,000 units in 2019 and add 400 jobs.
Photo courtesy of TMMI
by RON STARNER

If robots are gunning for all our jobs, then someone better tell Indiana, because the wave of automation isn’t exactly shoving factory workers out the back door of the Hoosier State.

Far from it, in fact. According to a new study from Ball State University, manufacturing has never been stronger in Indiana, and the ranks of factory workers there keep swelling.

While manufacturing production in the United States has grown by 11 percent since 2000, it has skyrocketed by 41 percent in Indiana during that same period, according to Ball State Center for Business and Economic Research (CBER) and Conexus Indiana’s report titled “Manufacturing and Logistics: A Generation of Volatility & Growth.”

Even more astounding is that Indiana excelled at adding production and jobs while manufacturing production declined in neighboring Michigan, Illinois and Ohio.

“Indiana is home to the highest concentration of manufacturing jobs in the nation, and Hoosiers are building the products that power our world every day.”

Just how important is manufacturing to Indiana? Consider this fact: Manufacturing and logistics have accounted for 52.5 percent of Indiana’s GDP growth since the end of the Great Recession.

The CBER-Conexus report goes on to give Indiana a stellar report card in key measurements of economic health. The report gives Indiana a grade of “A” for its performance in overall manufacturing industry health, logistics industry health, tax climate and global reach. The report gives Indiana a grade of “B” for its performance in worker benefit costs, expected fiscal liability gap, and productivity and innovation.

“The state continues to deliver top marks,” the report concludes. While neighboring Michigan and Kentucky also get an “A” for their overall manufacturing industry health, Ohio and Wisconsin each received a “B” and Illinois earned a “C” in the CBER study.

Indiana’s resurgence in making things likely stems from several factors, not the least of which is the fact that Indiana ranked first in cost of doing business in CNBC America’s annual Top States for Business survey. Indiana’s infrastructure also ranks as the best in the nation, according to CNBC, and its regulatory structure ranks as the least burdensome in the US, according to the Pacific Research Institute.

“We are the number one state in advanced manufacturing,” says Indiana Commerce Secretary Jim Schellinger. “It accounts for 30 percent of our GDP. We are second in the US in automotive production, making $1 billion worth of cars and trucks each year. Toyota, Honda and Subaru all assemble vehicles here, and we are the only location outside of Japan to have a Subaru plant.” 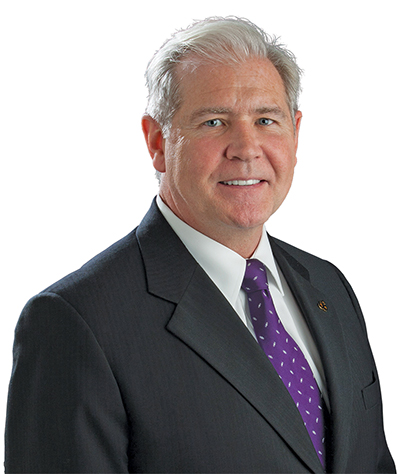 “We are the number one state in advanced manufacturing. It accounts for 30 percent of our GDP.”
—Indiana Commerce Secretary Jim Schellinger

Schellinger tells Site Selection that the perception of Indiana’s business climate began to change five years ago “when we passed right-to-work legislation. We were the first state in the Midwest to do that in more than 50 years,” he says. “Since then, we have had 120 companies come to Indiana through the Indiana Economic Development Corp. that said they would not have done it before. That added up to $2.6 billion in new capital investment. Being a right-to-work state has opened up a lot of opportunities.”

So has foreign direct investment. Schellinger notes that companies from 38 foreign countries employ 152,000 Hoosiers at plants across the state. Japan has 260 companies doing business in Indiana. 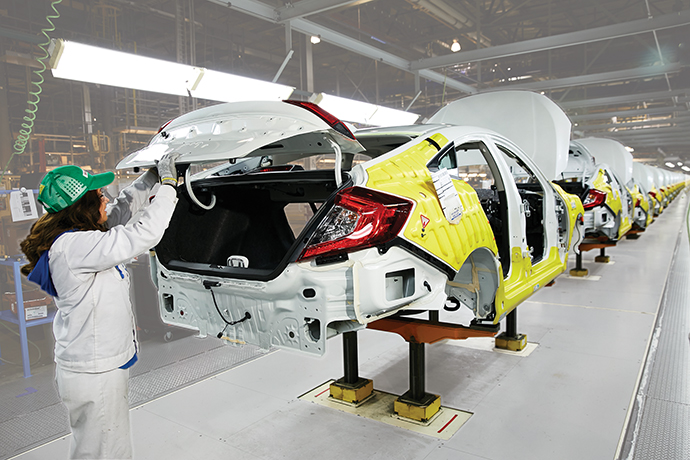 Honda Manufacturing of Indiana announced a new investment of $52 million and the creation of 100 new jobs last year at the Honda plant in Greensburg. Workers shown here assemble a Honda Civic at the plant.
Photo courtesy of HMIN

One of the biggest sources of FDI is Rolls-Royce North America, the British-owned conglomerate that is embarking on a $600-million aircraft engine expansion in Indiana. That includes $400 million for infrastructure and buildout and $200 million for technology.

“We’ve been in Central Indiana since 1985, and we are now one and a half years into our five-year project to revitalize our manufacturing centers here,” says Joel P. Reuter, vice president of communications and marketing services for Rolls-Royce North America in Indianapolis. “Thanks to generous support from state and local government, we are able to construct the most modern production systems worldwide. This will help us compete for the next 100 years.”

Reuter adds that Rolls-Royce has “a proven track record of working with Purdue University, and our total workforce in Indiana is 4,000. That includes 1,200 engineers and 1,050 workers in manufacturing.”

Because of a new collaborative effort with Purdue, Rolls-Royce was able to land the project to develop the new lift-fan factory for the Joint Strike Fighter jet that takes off and lands vertically.

Rolls-Royce is not alone in making huge FDI commitments to Indiana. In Princeton, Toyota Motor Manufacturing of Indiana announced earlier this year that it would invest $600 million and create up to 400 new jobs by the end of 2019. 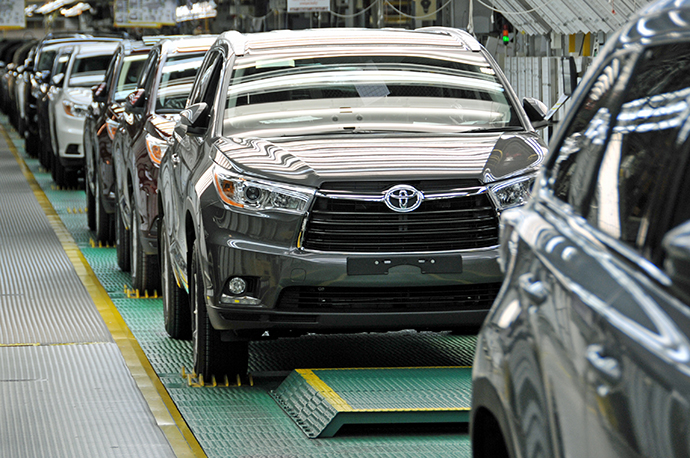 New Toyota Highlander SUVs roll off the assembly line at Toyota Motor Manufacturing Indiana in Princeton, where the Japanese automaker has committed to invest $600 million into plant modernization and expansion.
Photo courtesy of TMMI

Toyota, which has operated in Princeton since 1996, is the only location where the Highlander SUV, Sequoia SUV and Sienna van are manufactured. The new investment will modernize the company’s 4-million-sq.-ft. (371,600-sq.-m.) plant and make it more competitive. Production of the Highlander will be increased to 40,000 vehicles annually.

The expansion is part of Toyota’s localization strategy to build vehicles where they are sold.

A best-in-class logistics network makes that possible, Schellinger says. “We are the crossroads of America,” he notes. “We are within a 12-hour drive of 80 percent of the US population. We have access to two coasts. We have more Interstate highways than any other state.”

Logistics infrastructure is a big reason why Indiana is setting records, the commerce chief adds. “In 2015, we had a record year with 323 expansion projects, $4.8 billion in capital investment and the creation of 26,00 new jobs,” Schellinger says. “In 2016, we saw 223 projects and $2.6 billion in new investment, but we also saw a significant increase in wages.”

Ratings firms like what they see in Indiana too. With $2 billion in cash reserves, Indiana has earned a credit rating of AAA, tied with nine other states for the highest in the country.

“Our governor and our legislature are very committed to fiscal responsibility,” says Schellinger. “Businesses know that we are stable and predictable.”

That stable and predictable business climate nearly brought Indiana yet another major prize in early 2017 — the Amazon Prime Air hub that ultimately chose a site at the Cincinnati/Northern Kentucky International Airport in Hebron in Boone County, Kentucky.

According to sources interviewed for this story, Indiana was one of three finalists for the $1.5-billion Amazon investment, along with Northern Kentucky and the Wilmington Air Park in Clinton County, Ohio.

“Amazon did not want to be near the vast business that FedEx brings in,” says Brittany Mann, director of outside sales for IEDC. “FedEx has the number two largest hub in the world located in Indianapolis. So, while Indiana’s airport would have been able to accommodate the capacity and output of FedEx and Amazon at the airport, Amazon didn’t want to pursue that option. Moreover, Cincinnati had just lost their Northwest/Delta hub status, meaning there was a whole airport wing primed for opportunity without competition from other players, so that became a more natural fit for that Amazon location opportunity.”

That doesn’t mean that Indiana is losing the logistics race, however. With the Interstate 69 Corridor being completed all the way to Evansville and the state just landing its third international port, the future of logistics in Indiana has never been brighter.

“Indiana finishes first in a lot of rankings,” says Mann. “We like that.” 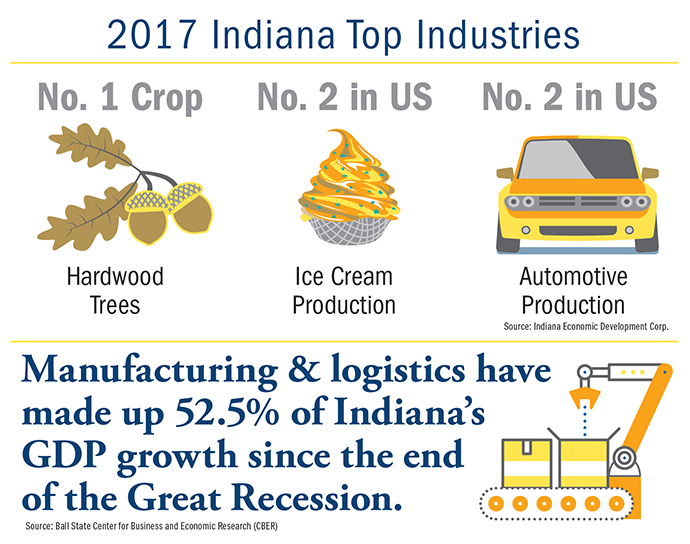 Keeping the skies safe and America free is not just a pastime in Indiana. It’s big business.

According to the Indiana Aerospace and Defense Council, nearly 60,000 Hoosiers are employed in some aspect of aerospace or military work.

“We are a top 20 state in defense contracting work with some $3 billion in Department of Defense contracts in Indiana right now,” says Ryan Metzing, executive director of the Indiana Aerospace and Defense Council. “From 2015 to 2016, we saw a 13.5 percent increase in aircraft engines and parts exports. That is now the fifth-largest export in Indiana.”

Metzing adds that “our largest aerospace companies have been doing well. Markets are doing better, and this uptick in exports is consistent. Our role at the council is essentially to make Indiana a better playground for these companies.”

Rolls-Royce North America, which has embarked on a $600-million expansion of its aircraft engine R&D and production operations in Central Indiana, has more Purdue engineers on staff than from any other school, notes Metzing.

“They also employ a lot of engineers out of the Rose-Hulman Institute of Technology, one of the premier engineering schools in the country,” he says.

Metzing adds that Purdue has a new aerospace research park in West Lafayette.

“This came out of the Rolls-Royce expansion,” he says. “Purdue is launching the Aerospace District with a propulsion laboratory and is working to attract other aerospace firms to do testing. Rolls-Royce is the first tenant.”

The Indianapolis International Airport “is also an attractive location for an aerospace company,” says Metzing. “We just had our inaugural non-stop flight from Indy to Seattle. That is a key resource for Rolls-Royce and other companies that work with Boeing. That is much bigger than tax incentives.” 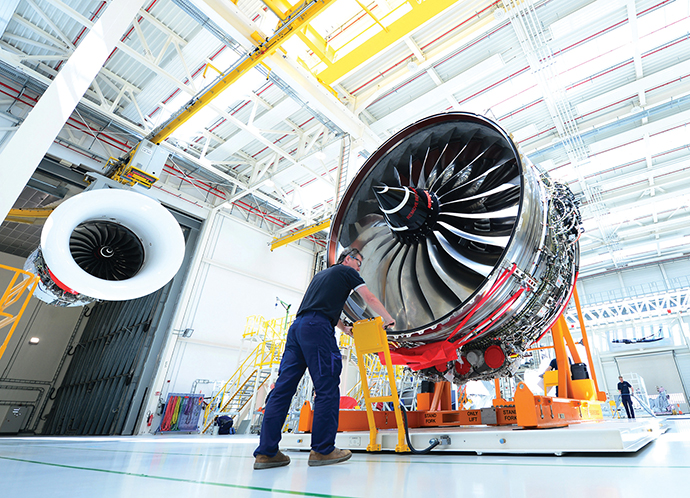 The Rolls-Royce Trent XWB engine is shown here. Today, more Rolls-Royce products are built in Indianapolis than anyplace else in the world.
Photo courtesy of Rolls-Royce

Indiana is a Leader in Incentives Transparency 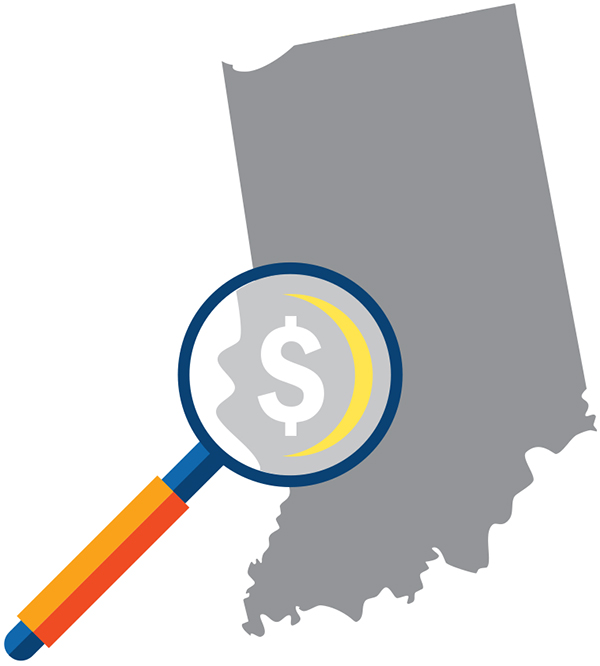 The PEW Charitable Trusts studied the way Indiana awards and regulates incentives for economic development and came away with a firm conclusion: Indiana does it much better than most states.

In a new report, PEW found that “Indiana is leading other states because it has a well-designed plan to regularly evaluate tax incentives, experience in producing quality evaluations that rigorously measure economic impact, and a process for informing policy choices.”

Based on the findings of these evaluations, PEW said, lawmakers in Indiana have actually eliminated some incentives that provided a poor return on investment.