On the Trail of Innovation 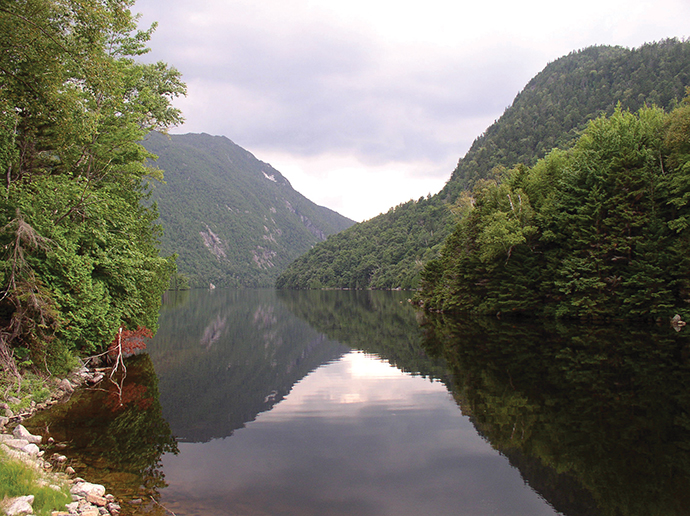 The tranquility of the Adirondacks is always just a step away in Fulton County, New York, in the northern part of Tech Valley. The excitement of robotics discovery (below) was just a step away from 36 teams of high-schoolers in Troy in March.
Photos courtesy of Adirondack Regional Tourism Council, VisitAdirondacks.com and Rensselaer Polytechnic Institute
by ADAM BRUNS 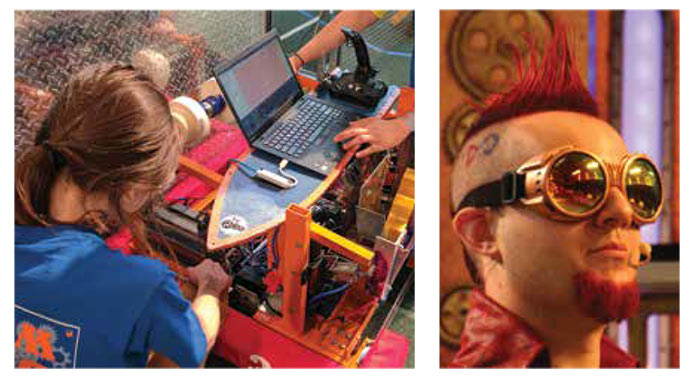 Since January 2014, Site Selection’s Conway Projects Database has tracked more than 70 private-sector facility investment projects across the 19 counties that comprise New York’s Tech Valley — a corridor 80 miles (129 km.) wide and more than three times as long that runs from just north of the Big Apple all the way to the Canadian border.

The region started using that name decades ago. It built momentum as high-tech companies and consortia such as GlobalFoundries and Sematech grew alongside the expanding resources at places such as Rensselaer Polytech in Troy and the College of Nanoscale Science and Engineering (CNSE) at SUNY Polytechnical Institute in Albany.

The momentum struck a big bump last year when allegations of corruption connected with a federal investigation into the so-called Buffalo Billion program forced SUNY Poly President and regional nanotech champion Alain Kaloyeros to step down. But with the help of tools such as the state’s STARTUP-NY program, the region’s forward progress isn’t about to be slowed down. Projects involving R&D in Hamptonburgh to titanium in Plattsburgh continue to light up the corridor. No wonder Albany was No. 4 in ZipRecruiter’s most recent ranking of the nation’s top 10 tech job-growth cities. At 161 percent year-over-year job growth, the metro area outpaced such locations as Kansas City, Orlando, Salt Lake City and Nashville, while still just shy of Phoenix, Thousand Oaks, California, and No. 1 Huntsville, Alabama.

One of the region’s anchors continues to fortify its fortress. In February, GlobalFoundries announced plans to expand its global manufacturing footprint with investments across its portfolio — in Dresden, Germany; Chengdu, China; Singapore and at its Fab 8 facility in Malta, New York. The Santa Clara, California–based company plans to expand 14nm FinFET capacity by an additional 20 percent, with the new production capabilities to come online in the beginning of 2018.

“This expansion builds on the approximately $13 billion invested in the United States over the last eight years,” the company stated, “with an associated 9,000 direct jobs across four locations and 15,000 jobs within the regional ecosystem. New York will continue to be the center of leading-edge technology development for 7nm and extreme ultraviolet (EUV) lithography, with 7-nm production planned for Q2 2018.”

Meanwhile, the Saratoga County Prosperity Partnership has announced the formation of an advisory council to advance its Next Wave Center project — a physical location that would house companies in the semiconductor supply chain, advanced manufacturing, nanotechnology and clean energy industries. In addition, it would provide education and technical training, a range of business support services, and include a co-working space to serve companies in a wide variety of complementary and collaborative businesses.

The council will be chaired by Dr. Gary Patton, chief technology officer and senior vice president, worldwide R&D, for GlobalFoundries.

“GlobalFoundries will provide industry leadership in advanced semiconductor manufacturing to help direct this project and continue to build the ecosystem of supply chain companies that are vital to high-tech growth in the region and state.” said Patton.

The Saratoga Partnership is working with Tom Nardacci, founder of the Troy Innovation Garage, to establish a co-working space that would give emerging technology-based businesses access to resources and networking.

Among the recent projects receiving support from the Saratoga Economic Development Corp. is Espey Manufacturing & Electronics, which the SEDC, helped secure a 10-year PILOT incentive valued at $656,358 for the company’s $5.26-million investment in plant upgrades. The investments by Espey — whose average wage of over $62,000 is more than the Capital region’s average wage of $53,000 for the manufacturing sector — are in power transformer and generation technologies needed in support of the US Department of Defense and military branch systems, and will support retention of 144 local jobs.

Education Helps in More Ways Than One

Last October, Governor Andrew Cuomo announced that 39 businesses have joined START-UP NY and will expand in or locate to New York State through the tax-free program associated with colleges and universities across the state. These 39 businesses have committed to create 817 new jobs and invest more than $30 million statewide over the next five years.

The State University of New York ranked 38th in the “Top 100 Worldwide Universities Granted U.S. Utility Patents for 2016,” according to the National Academy of Inventors (NAI) and Intellectual Property Owners Association (IPO).

START-UP NY now has commitments from 202 companies to create at least 4,490 new jobs and invest more than $251 million over the next three to five years throughout New York State — including in Tech Valley, where 17 of those companies are creating a total of 302 of those new jobs. Among the firms investing the most:

Aurora innovations, Inc., a new company to New York State, is a national manufacturer and distributor of organic garden products based in Eugene, Oregon, that will be opening a new eastern US manufacturing and distribution facility in the Mid-Hudson region. The company will create 53 new jobs and invest approximately $4.7 million.

Pisa Biopharm Inc., which manages US and Canadian customer relationships for Grupo Pisa, the largest healthcare group in Mexico, will create 10 new jobs and invest $522,000.

Cell-nique Corporation is a new food & beverage company to New York State that will be relocating its headquarters from Connecticut, creating 18 new jobs and investing $300,000.

SimplyTel, LLC is a new company that designs and manufactures hardware and software for caregivers to communicate and remotely monitor elderly relatives living independently at home. The firm will create 11 new jobs and invest $400,000.

Prelco U.S. Inc. is a new New York State company, opening a US branch of a Canadian company that manufactures metal windows and doors for vehicles other than automotive. The company will create 17 new jobs and invest $425,000.

Up Homes is a formative-stage company that will design, manufacture and sell modern, energy-efficient and customizable manufactured and modular homes. The company will create seven new jobs and invest $575,000.

FlightLevel Dutchess, LLC is an existing aviation services company in NYS that owns and operates Fixed Base Operations (FBO) at the Dutchess County Airport. The company will create seven new jobs and invest $310,000.

The region’s educational system is helping pave the way for the next generation coming after today’s startups: In March, the Tech Valley region became home to a brand new FIRST® (For Inspiration and Recognition of Science and Technology) event. The event took place on the Rensselaer Polytechnic Institute (RPI) campus in Troy.

Based in Manchester, New Hampshire, FIRST® designs programs to build self-confidence, knowledge, and life skills while motivating young people to pursue opportunities in STEM fields, and has support from over 200 of the Fortune 500 companies.

“The FIRST Robotics Competition isn’t just about the robots,” said Paul Schoch, associate professor in the Rensselaer Electrical, Computer, and Systems Engineering department, and director of the university’s Center for Initiatives in PreCollege Education (CIPCE). 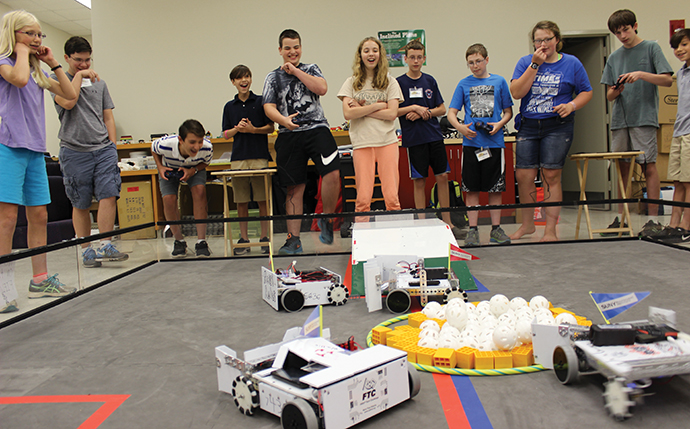 SUNY Polytechnic Institute (with campuses in Albany and Utica) conducts its own menu of activities to bring along the next tech generation. This summer it held its annual STEM-based youth summer camp in Utica.
Photo courtesy of SUNY

With a weighted score of 41.2, Westchester County, New York, was ranked No. 9 among US life sciences clusters in JLL’s 2016 Life Sciences Outlook report released in December 2016, just ahead of New Jersey and New York City. It’s a long way to go to catch No. 1 Boston (with a score more than twice Westchester’s), but there’s plenty to get excited about.

According to the report, Westchester is among second-tier clusters that “will exhibit more interest from developers as institutional capital floods top markets, leading more established companies to entertain the cost-savings benefits of rising markets.” Testing, medical and diagnostics labs and R&D space make up more than two-thirds of the area’s total life sciences employment base of 7,760 professionals at 214 establishments.

Led by Regeneron’s continuing expansion (adding 1,200 jobs and building out to 1 million sq. ft. [92,900 sq. m.] in Tarrytown), life sciences was one of the only growth sectors in the region during the Great Recession and subsequent recovery, said JLL. Altogether, around 10,000 biomedical professionals work in the county, including at Ardsley Park business park (home to Acorda) and at North 60, a forthcoming biotech and medical space at the Grasslands Reservation that will include a $12.6-million biotech incubator from New York Medical College and a $500-million, 2-million-sq.-ft. (185,800-sq.-m.) biotech and medical park from Fareri Associates.