New research explains where job markets in this sector are gaining altitude in manufacturing, air transportation and support activities. 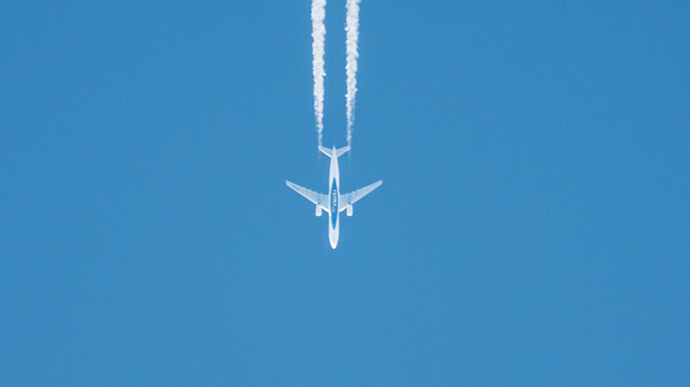 The Aerospace Industry Cluster provides employment in a variety of operations from aircraft manufacturing, commercial airline travel, air cargo, private and charter flights, to maintenance, repair and overhaul (MRO) facilities. With nearly 490,000 people in the U.S. engaged in the Aerospace Product and Parts Manufacturing process (NAICS 3364), this is the largest employment sector of the cluster representing 42 percent of the total 1.16 million U.S. aerospace workforce.

A close second is the business of Scheduled Air Transportation (NAICS 4811) including those that provide air transport to passengers or cargo on regular routes and timetables. This sector employs nearly 430,000 across the nation. The third largest sector employs nearly 200,000 involved in Support Activities for Air Transportation (NAICS 4881) which, in general, include services such as airport operations, aircraft service, repair, maintenance, as well as storage and ferrying aircraft. The final and smallest sector is Non-Scheduled Air Transportation (NAICS 4812) employs roughly 44,000 covering charter flights for passengers or cargo. This division of employment can be viewed in the pie chart below.

For this review, the functions of Scheduled Air Transportation, Non-Scheduled Air Transportation and Support Activities for Air Transportation will be grouped into one category for comparison to the Aerospace Product and Parts Manufacturing sector. Both of these groups have experienced cyclical employment trends over the past five years with the service side of the industry growing over the past three years. Aerospace manufacturing has weathered a sizable employment loss in 2014 and a milder loss comparing 2015 to 2016. This trend can be seen in the Annual Employment Change chart below. 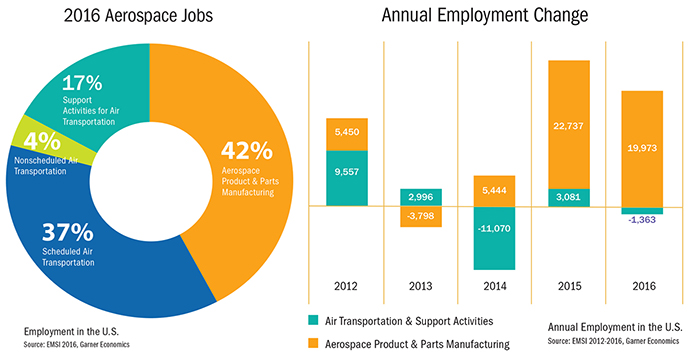 Overall the Aerospace Industry Cluster has a net growth of 18,600 jobs, and the 1.16 million employment level is about the same amount as 2008 according to statistics from EMSI which includes Bureau of Labor Statistics covered employment, non-covered employment and self-employment. The NAICS mentioned above were used to obtain an equal comparison across metro areas in the U.S.

For Aerospace Product and Parts Manufacturing, California and Arizona each contain two of the top 10 metros with the Seattle-Tacoma-Bellevue, Wash., MSA topping the list with almost twice the employment of the second and third Metro on the list. The total employment of the top 10 metros within this sector (NAICS 3364) is over half of the entire nation’s employment in the same sector. For three of the top 10 manufacturing metros, the employment location quotient is very high — the Wichita Kan., MSA has the highest LQ of any metro in the nation with an LQ of 27.88; Seattle MSA has an LQ of 13.6; and Tucson, Ariz., MSA has an LQ of 8.62. Not on the top 10 list for employment volume is Savannah, Ga. MSA with a high LQ of 16.99, home to the headquarters and production facility for Gulfstream.

For Air Transportation and Support Activity for Air Transportation, the top metros are geographically diverse however line up closely with the nation’s busiest airports. With commercial airlines and air cargo operations making up a larger portion of this combined sector, this alignment is quite logical. The New York-Newark-Jersey City, N.Y.-N.J.-Pa. MSA is ranked as the top metro in this category and is home to three major airports. Several metros are not aligned within the top 10 busiest airport and top employment centers — Charlotte, N.C., and Las Vegas, Nev., are top airports but rank 16th and 18th respectively for Air Transportation & Support Activities. 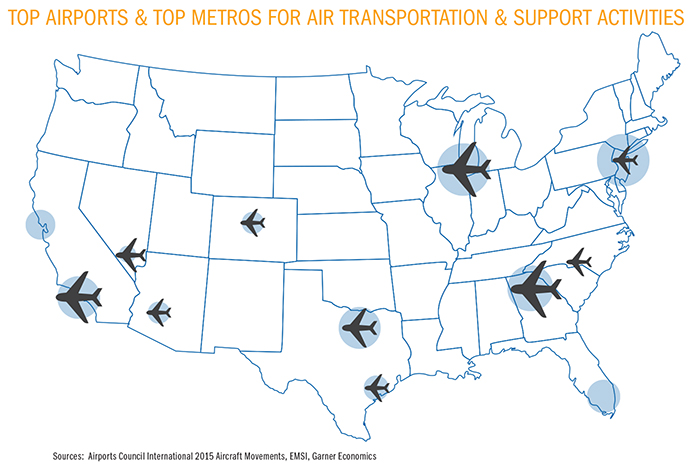 The Aerospace Industry Cluster, although cyclical, still proves to be a growing sector since 2014 overall. The TOTAL AEROSPACE EMPLOYMENT FOR THE U.S. 2006-2016 shows the increase brings total employment to 2008 levels. Both the Aerospace Product and Parts Manufacturing and Air Transportation and Support Activities provide growth opportunity for many metros across the U.S. Although, more populous areas sustain the Air Transportation and Support Activities via busy airports, some metros find a specialization in that sector such as Anchorage serving a widespread area through air travel. 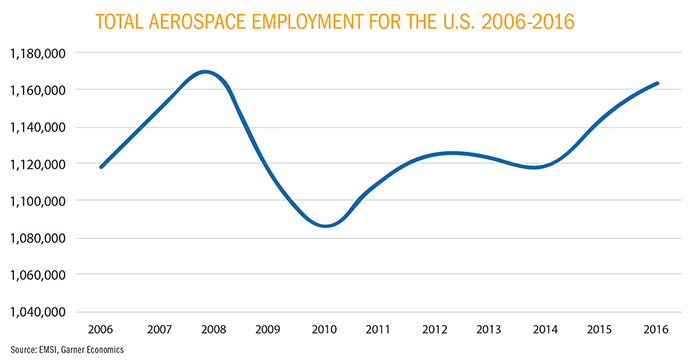 Aerospace Manufacturing is a coveted sector for economic development agencies, with a handful of metro areas employing a majority of its workers. There are some metros that are not yet on this radar that the NAICS code presents. NAICS codes are self-assigned by companies and therefore aerospace suppliers or possibly a newer aircraft production facility may not be reflected accurately in the NAICS code system. Several metros are emerging in the aerospace market including Greensboro-High Point NC MSA, home to Honda Aircraft Company producing the new HondaJet, and Mobile AL MSA, home to a new Airbus facility making the A320 family passenger jets. 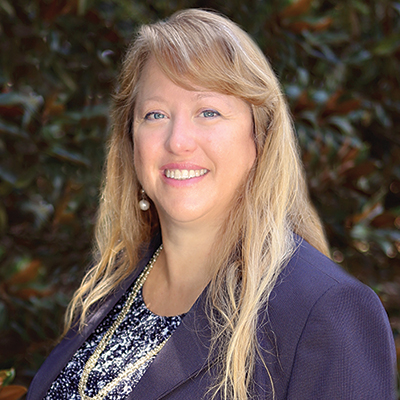 Cyndi Dancy is Research Director at Atlanta-based Garner Economics LLC. This report is excerpted from her May 2017 report, The Aerospace Industry Cluster in U.S. Metros. For more information, email cyndi@garnereconomics.com. 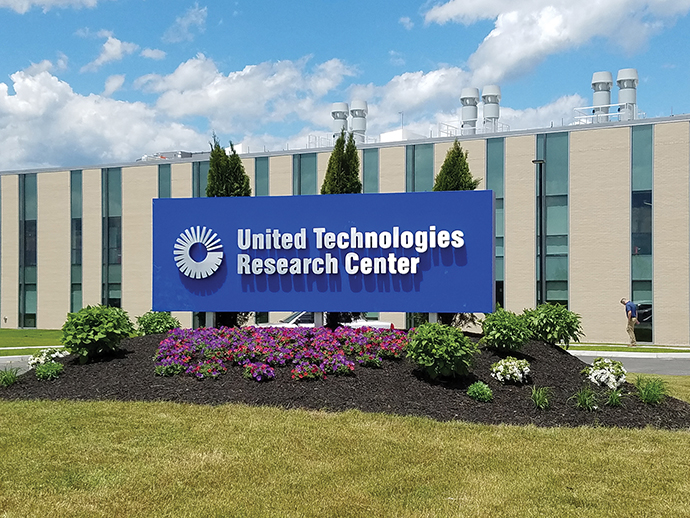 The new innovation hub includes 185,000 sq. ft. (17,190 sq. m.) of new and renovated office and laboratory space. The $60-million buildout was enabled through a collaboration with the State of Connecticut through the 2014 Connecticut Aerospace Reinvestment Act (CARA). This investment enables UTRC to expand its core capabilities in advanced materials, measurement sciences, sensor technologies, environmental sciences, autonomous systems and human-collaborative robotics.

The new Additive Manufacturing facility will accelerate deployment of a broad range of metal and polymer additive technologies across UTC businesses. In the new Engine Compressor Research facility, UTRC and Pratt & Whitney will develop and mature advanced compressor technologies for future commercial and military engines.

“Global innovation at UTC begins right here at the Research Center in East Hartford,” said Dr. David Parekh, corporate vice president, research, and director, UTRC. “Today we are unveiling a clear demonstration of UTC’s commitment to investing in the breakthrough technologies that will help shape our future.”