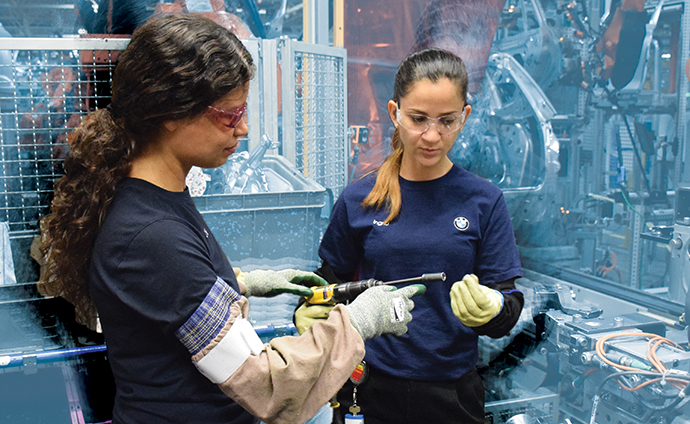 Experts in economic development say the secret sauce for attracting and retaining high-value companies has a new main ingredient: an abundant, specially trained and motivated workforce.

“It’s really interesting how the conversation has changed,” says Jonas Peterson, President and CEO of the Las Vegas Global Economic Alliance. “I think today it’s fair to say that workforce is the top issue, and it’s pulling away from the pack.”

Tim Hardee agrees. As president of South Carolina’s technical college system, Hardee shepherds one of the top statewide apprenticeship programs in the country.

“At one time,” says Hardee, “it was incentives, but the dynamic has changed to where if you can’t answer the question about workforce, really the other questions don’t matter. In particular, if you want to attract the Boeings, the BMWs, and the Mercedes-Benzes, you don’t do that without having a talented workforce pipeline.”

But the challenges to building a local workforce, as evidenced by the so-called “skills gap” that threatens to slow growth across entire industries, can be daunting. The National Federation of Independent Business found that as of the first quarter of 2017, 45 percent of small businesses reported that they were unable to find qualified applicants to fill job openings.

Companies report shortages of workers across a range of middle-income jobs, from nurses to oilfield workers to computer network specialists to automotive technicians. Traditional assembly-line work, most agree, is not coming back, and cracking the job market necessitates increasingly technical skills that, unlike many jobs of the past, require specialized, sometimes intensive training.

That is why workforce investment boards, economic development groups, state organizations and entire industry sectors are increasingly banding together to focus workforce efforts on current and prospective workers who haven’t attended college, but who, with properly tailored instruction, can build careers in mechatronics, machine repair and technology, advanced manufacturing, healthcare, IT, and other jobs created by the information economy.

Building on the public workforce system, some local leaders have begun organizing workforce development efforts around innovative frameworks known as career pathways and sector strategies. The old-fashioned apprenticeship is making a comeback, as well.

“We want a future where every high school in America offers apprenticeship opportunities for young citizens …”
—President Donald Trump, June 14, 2017

“We always think of training as more innovative when workforce programs are tied as directly as possible to employers,” says Lauren Eyster, senior research associate at the Urban Institute, which studies workforce development programs across the country.

“I think true partnerships with employers are ground-breaking,” says Pryor. “A lot of training programs get behind the eight-ball, meaning they train individuals on the latest they know. But not necessarily being directly connected to the industry, they miss some of the trends. Equipment, laws and processes are always evolving, so the employer partnership is a model with real potential.”

In 2013, JPMorgan Chase launched a series of investments now totaling $325 million toward national workforce development and career education. The program included an initial grant of $3 million to launch the Healthcare Workforce Collaborative in Chicago, a city in which the bank identified more than 14,000 well-paying healthcare jobs that needed to be filled annually. The Chicago initiative, a sector strategy, is being operated by Advocate Health Care, the largest health provider in Illinois.

“Our program,” says Advocate’s Pryor, “is really about helping individuals from disadvantaged communities have access to healthcare career jobs that are middle-skill-based.” He calls the program “employer-led, demand-driven.

“Having this pipeline is an opportunity for us to fill jobs quickly,” says Pryor. The retention rate among employees who have completed the program, he says, is 96 percent.

Career pathways not only prepare workers for employment but support their advancement in high-demand occupations. Career pathways also can be embedded within sector initiatives, such as the one at Advocate.

“It’s a lot about promotion,” says Pryor. “It’s about increasing wage potential, providing options. So we’ve developed an incumbent worker strategy that’s all about investing in our frontline workforce. We provide tools and resources, and we have a career map document where we can show them where they are and how they can progress forward.”

According to the U.S. Department of Labor, in 2016, about 505,000 people held apprenticeships across the land, a number President Trump hopes to boost by committing some $200 million to a national apprenticeship program he announced in mid-June.

“When we started the program back in 2007,” says Tim Hardee, “we had about 800 apprentices in the state. Now we have 26,000.” That includes apprentices in healthcare, IT, advanced manufacturing and other areas.

Germany-based Continental Tires chose Sumter, South Carolina, as the site of a $500-million manufacturing plant in 2011.

“When Continental came,” says Hardee, “the apprenticeship model was something they were very keen on. We brought in the local school district and started a local partnership between K-12 and the local technical college. It’s evolved now to where mechatronic students graduate with an apprenticeship and go to work for Continental. It’s the same model we’ve used with other companies, whether it’s BMW or Michelin.”

Since landing in South Carolina, Continental has expanded the Sumter plant and has more than doubled its payroll from 700 workers to 1,600. 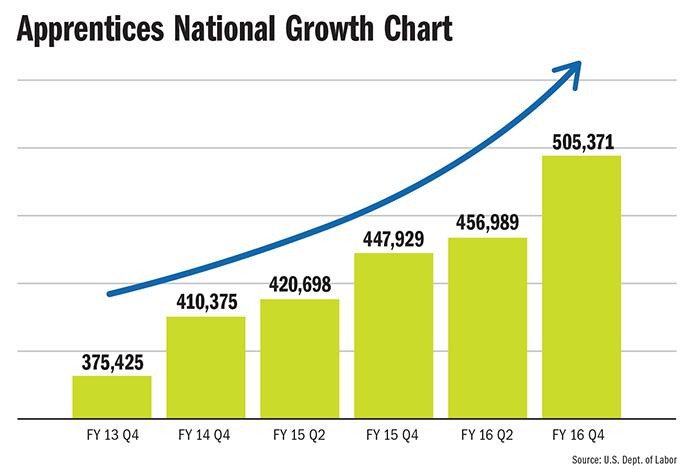