A GE Digital executive describes the strategy behind the company’s growing network of digital hubs. 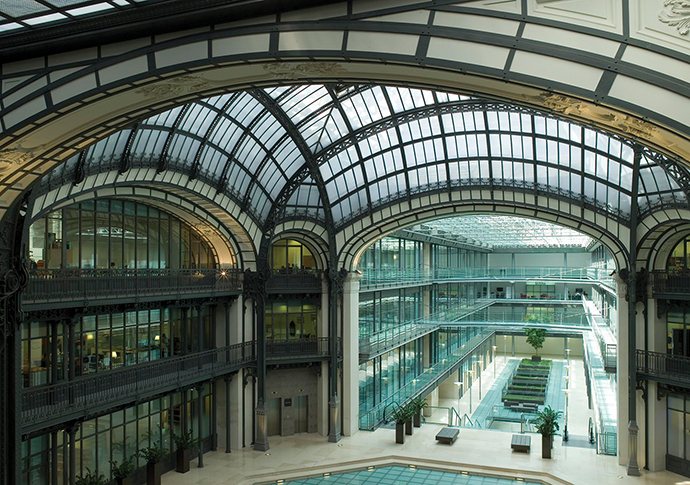 GE’s Digital Foundry in Paris, designed by Hidekazu Moritani with a vision of the honeycomb beehive in mind, occupies two floors in the 140-year-old Le Centorial building, originally designed by Gustave Eiffel for a major office for Credit Lyonnais.
Photo courtesy of GE Digital
by ADAM BRUNS

“We’ve been here for four or five years now, in what we originally called the design center — that was in the early days, and we didn’t know how things were going to work out, especially with the Industrial Internet,” Karim says from his office at the San Ramon complex. “We thought of it as a place to bring people together and do experimental workshops. Foundries have evolved to be much more than that element … we’ve definitely up-tiered the capabilities from where we started.”

The evolution of the San Ramon space has been reflected in the foundries in Paris and Shanghai. For one thing, open gathering spaces have shrunk. And diagnostic capabilities have been improved so GE customers and staff alike can see assets in action. Among the upgrades in San Ramon, he says, is not an internally focused innovation engine, but a large executive briefing center.

It’s just the latest phase of the 130-year-old company’s parallel journeys as industrial giant and digital innovator. “How do we really become one fully integrated digital industrial company?” Karim asks. “It all revolves around our customers. We tell about our own journey — what we’ve done correct and done wrong — and those learnings are the ignition point for them to start thinking about their own business and their own culture. A lot of this takes some cultural courage.”

The foundries offer a place to co-create with customers based on design thinking principles, in a building that brings together digital and physical worlds, analytics and creativity, using GE’s Predix (a cloud platform for the Industrial Internet) with the end goal of a test or pilot. The foundries are also focused on the overall software developer ecosystem.

“We have some massive plans when we think about the Industrial Internet,” Karim says, but “GE doesn’t have all the time or money or resources. We’re much more open about partners.” GE Digital Alliance partners includes such firms as Intel, Capgemini, TCS, Deloitte Digital, Infosys, Genpact, Softtek and Wipro Limited.

“Another extension of the foundry is driving incubation,” says Karim, “working with small firms or with universities and venture firms, creating this ecosystem around IoT.”

Karim says digital hubs such as a new facility in Budapest have sprung up in the wake of the firm’s own IT outsourcing. “There’s been a big push the last couple of years to reverse that and insource new talent,” he says. “The best way is to create these larger centers where all these people can come together while we modernize our talent. They create tools and services we need, oversee our security, oversee our operations such as data centers, and do app development when it comes to our own enterprise. They are running all of our infrastructure.”

Asked how the Digital Foundry locations were chosen, Karim says, “We looked at the market and asked, ‘Where is the GE presence today? Where are our major customers? What part of the market is going to grow the fastest, in terms of both GDP and customers? And lastly, where is the talent? Where do we need to go to find people doing software architecture, design and development?’ Take those three factors into consideration, and Paris and Shanghai came up immediately.” 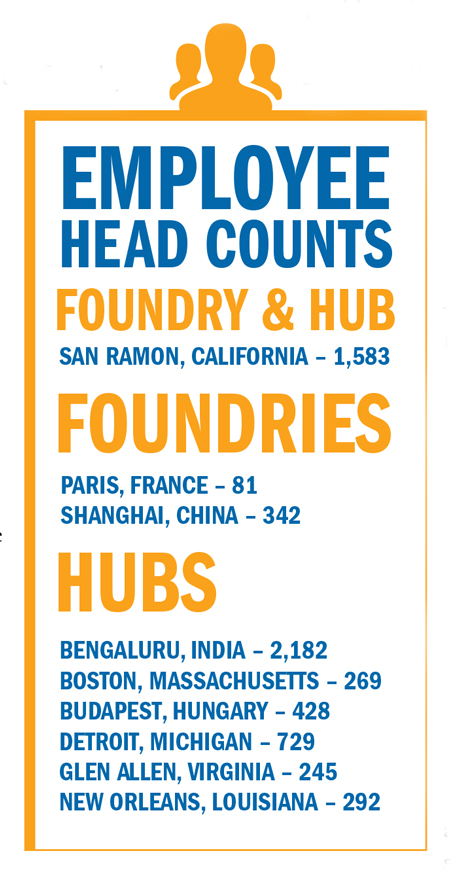 In China there was debate about whether to go to Beijing or Shanghai, he says. “We felt both were talent-rich, but chose Shanghai because we wanted to go fast. It’s actually now split equally between the two. We feel very good about that investment.”

GE plans to grow the number of people working in the Europe foundry to 250 by 2018.

“Paris is one of the most global cities in the world, with a very rich engineering culture,” Karim explains. “People think, ‘Why not London?’ Paris is a global city, but on the continent. We didn’t know about Brexit then, of course. We also had done a huge acquisition with [French firm] Alstom, so that was another big deal.

“It’s all underpinned by talent — that is the key criteria,” he repeats. The foundries are “all about having customers and developers come together, having real people on the other side, deeply advanced, thinking through problems. It has to be full of life and vibrancy and energy.”

Partly with the help of the popular GE advertising campaign featuring new GE talent full of gravitas vs. with geeky one-off app developers with none, the company has drawn people from the top universities in France and in China, from other big tech multinationals and global consultancies, and from some small incubators. But is the startup vibe as big a deal as it’s made out to be?

“It’s hugely important,” Karim says, noting the 6-million-strong Chinese Developer Network and a new incubator in a former railway station in France that will house 150 startups. The design of the foundries is meant to make that vibe reverberate, changing customers’ perspectives and GE’s legacy culture at the same time.

“When you walk into that honeycomb place, there are a couple things going on,” he says. “It gives you a wow factor, and that demonstrates our commitment. And all that energy makes customers excited. It’s refreshing. Part of what we’ve done in changing our own culture is coming back to this startup mentality.”