Chewing through the data reveals which locations in the US and abroad have the secret recipe for attracting corporate HQs. 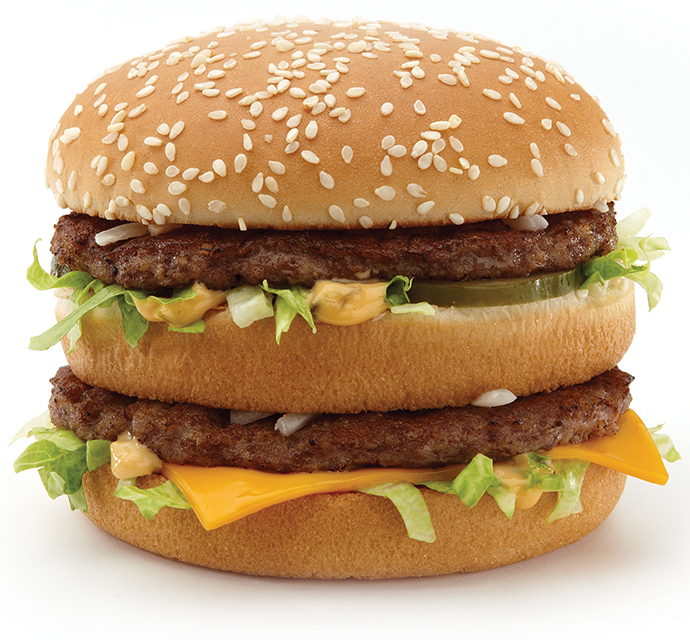 McDonald’s is moving its HQ back to downtown Chicago from suburban Oak Brook.
Photo courtesy of McDonald’s
by ADAM BRUNS

When it comes to headquarters location trends, mining the data can demonstrate where companies are finding the best value.

Since the beginning of 2013, Site Selection’s Conway Projects Database has tracked more than 2,350 facility investments worldwide that involved a headquarters component. Fifty of them have occurred in the United Kingdom, with another 38 landing in Ireland, thanks in part to the island’s tax-haven status. 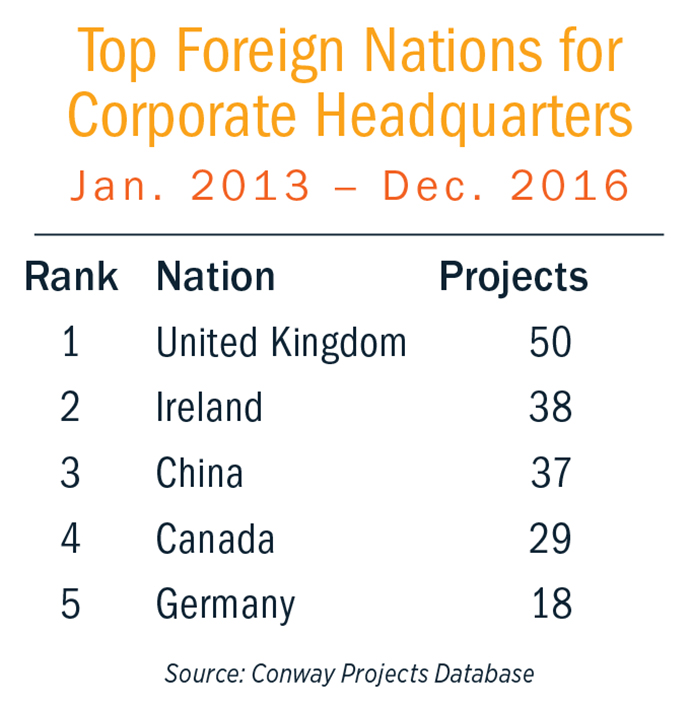 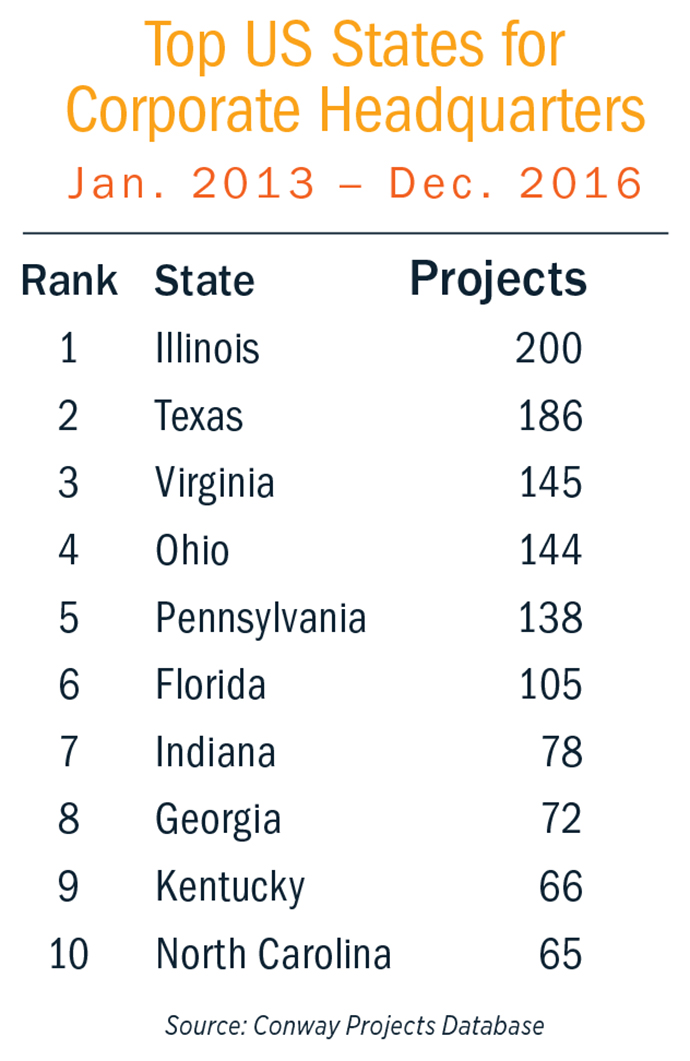 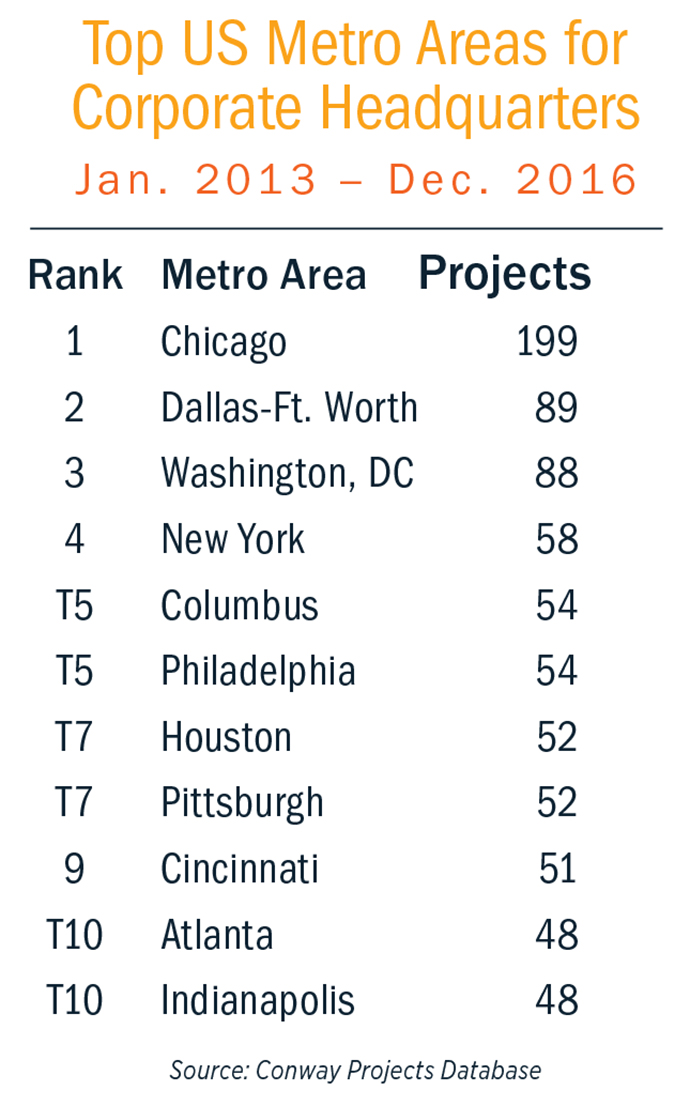 That status was in the news as 2017 got underway, as the European Commission levied a $14-billion tax bill on Apple, whose European HQ is in Cork. Apple in February contested the EU’s claim.

Meanwhile, Apple in August 2016 got the go-ahead to add as many as 1,000 jobs at the headquarters complex, giving the lie to those who claim Irish HQs exist mostly on paper.

The HQ expansion announcements in Ireland just keep pouring forth. Job site Indeed in February 2017 announced expansion plans for its Dublin-based headquarters for Europe, the Middle East and Africa (EMEA), adding 500 new employees over the next two years. Website and app firm NGINX announced its own new EMEA HQ in Cork, where it will add 100 jobs over the next three years. And LinkedIn in November announced the addition of 200 jobs at its EMEA headquarters in Dublin’s Wilton Place, where the company has grown from three employees in 2010 to 1,000 today.

In the US, the biggest HQ news to break this year has included a pair of relocations from California, and Caterpillar’s decision to move its headquarters to the headquarters capital of Greater Chicago.

In Chicago, Cat is simply following a trend that has seen HQ locations or internal moves in the metro area in recent months by the likes of Google, Dyson and McDonald’s, which is moving back downtown from suburban Oak Brook back to downtown, where its HQ resided from 1955 to 1971. Caterpillar’s global HQ is expected to be home to some 300 employees once the company moves into leased space later this year. A headquarters complex that had been planned for Peoria will not be built, but the city will still be home to a large employee base that handles many of the company’s essential functions.

“Since 2012, about two-thirds of Caterpillar’s sales and revenues have come from outside the United States,” said Caterpillar CEO Jim Umpleby on January 31. “Locating our headquarters closer to a global transportation hub, such as Chicago, means we can meet with our global customers, dealers and employees more easily and frequently. We value our deep roots in Central Illinois, and Peoria will continue to be our hometown.”

Two prominent companies are moving their HQs out of California. AutoAlert is moving to Kansas City, Missouri, bringing 300 jobs with it, and adding 200 jobs overall across its offices in KC; Irvine, California; Boston, Massachusetts; and Manchester, UK.

Nestlé USA is moving from Glendale, California, to Arlington, Virginia, after a 20-city search. The move brings 750 headquarters jobs to the DC area, which won out over Atlanta. Both cities rank in the Top 10 Metro Areas for Headquarters, according to Site Selection’s Conway Projects Database.