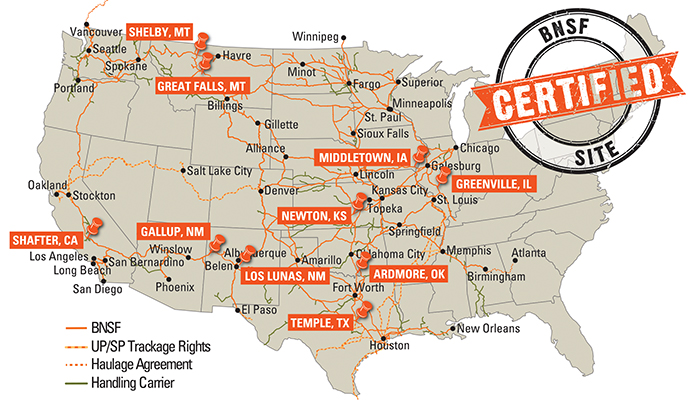 Anyone who has ever worked on developing a site or facility project knows first-hand how time-intensive it can be. Establishing transportation and distribution solutions that are customized to your business isn’t always easy, and that’s why BNSF Railway looks to partner with its customers to help select the best solution that meets their needs. “We believe in collaborating with our customers to proactively develop products that enhance and improve their supply chains,” says Colby Tanner, assistant vice president, economic development, for BNSF.

He should know. In a career that spans state economic development, location advisory and site selection for Walmart and Sam’s Club, he’s seen all sides. At one point during his time with the Arkansas-based retailer, his team was looking for a distribution center location on the outskirts of Kansas City.

“We reviewed the site, and one of the biggest reasons we ended up not choosing it was the timing was off between us and the railroad. In other areas you came across the same thing time and time again — cities had sites they’d earmarked for industrial development, but had made no progress in getting it entitled, permitted and prepared.”

Indeed, communities unfamiliar with all the steps required to be truly shovel-ready may find themselves in the middle of more than they’d bargained for. So, over the past year, BNSF’s Certified Sites program has given them more chips to bargain with.

“We’re trying to bridge the gap among the railroad, our customers and the communities,” Tanner says. “Communities that have a site that can be rail-served can take six to nine months out of the review process, which for a customer translates into real time and money.”

The BNSF Certified Sites program aims to keep those billions rolling. The program was launched in March 2016 with four sites. In response to a deluge of interest from communities, six more sites were announced in January 2017. Several of the sites aim to eventually encompass more than 1,000 acres of industrial park environment.

“Factors known to be critical for a commercial development project include a true picture of property size and boundaries, the confirmed availability of utilities, public services, highway access, proper zoning for industrial usage and transparency of current land ownership,” says Tanner. “BNSF also vets assessments on environmental impact, geotechnical reviews, and endangered species considerations or cultural matters such as land with known archaeological value — all to be confident of a good fit with rail expansion.”

“Having advanced knowledge of infrastructure connectivity can be one of the greatest benefits of certified sites.”
— David Hickey, Senior Director, Hickey & Associates

“Having advanced knowledge of infrastructure connectivity can be one of the greatest benefits of certified sites,” says David Hickey, senior director at global location consulting firm Hickey & Associates. “For our clients requiring rail access, the BNSF Certified Sites program provides us with an immediate list of locations to begin evaluating across an expansive landscape.”

BNSF’s pipeline of economic development work includes a steady stream of energy and agricultural projects and a growing consumer-goods business. Tanner notes multiple projects in and around Logistics Park Kansas City — the same area in Edgerton, Kansas, where Tanner’s team didn’t pull the trigger years ago. “A lot of companies are wanting to co-locate next to our intermodal facilities because they want to reduce drayage costs. If they can locate right next to our facility in Fort Worth, for example, the drayage is next to nothing.”

Tanner just came to BNSF in 2015, so his experience with rail was next to nothing, too. He’s like a kid in a candy store watching BNSF colleagues and business partners clear tons of snow off the tracks or lay down fresh rail.

But that doesn’t compare to the thrill of watching loaded cars move product out to a waiting world. That implacable rail built in the 1800s remains a historical milestone, but also a fixed asset whose potential has yet to be fully realized.

Ultimately that’s why the BNSF Certified Sites program exists. What site certification accomplishes is to bring the simple and powerful design of the railroad itself to bear on the economic goals of the territories and people it serves.

“If you need to be on a rail line in the next six months,” says Tanner, “come talk to us. With our Certified Sites, we can be shovel-ready for you.”

This Investment Profile has been prepared under the auspices of BNSF. BNSF’s Economic Development team uses a transparent, responsive and collaborative approach for working closely with companies, communities and consultants with the goal of establishing transportation and distribution solutions customized to the needs of the enterprise. For more information, visit www.bnsf.com/ed.