The Math Adds Up Here 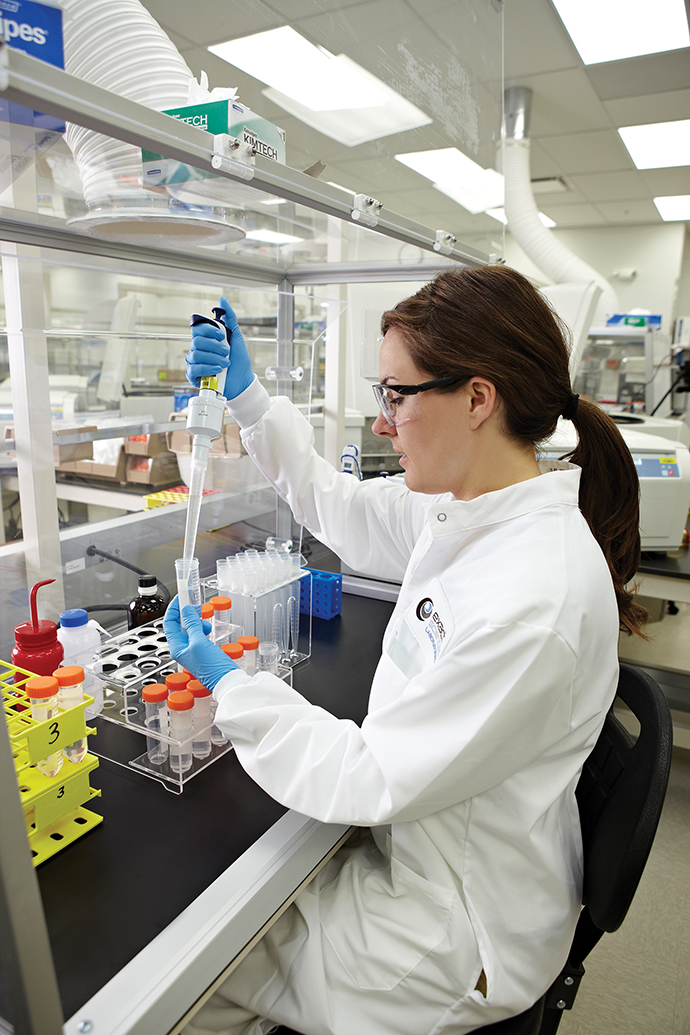 Exact Sciences is one of many bioscience companies that draw upon Wisconsin’s R&D leadership, strong supply chain and deep talent pool.
Photo courtesy of Exact Sciences

In the Madison Region, computer and life science skills form the foundation of a globally competitive cluster in biotech and healthcare IT.

From Epic Systems’ breakthrough software that revolutionized medical records, to Stratatech’s regenerative skin therapies, the capital region of Wisconsin has been churning out innovative firms whose primary purpose is the promotion of personal health and wellness.

Anchoring a metropolitan region of 866,475 people, Madison outperforms much larger MSAs in a variety of intellectual property pursuits:

The anchor of this sector is Epic Systems, the country’s leading developer of electronic medical records and the Madison Region’s largest private sector employer with 10,000 workers. Each year, more than 1,000 employees leave Epic, many to start spinoff companies that augment Madison’s leadership position in healthcare IT.

“Epic gets more than 100,000 applications every year from around the world,” says Zach Brandon, president of the Greater Madison Chamber of Commerce. “When people say you can’t compete in the Midwest for worldwide talent attraction, that is absolutely not true.”

Epic’s Madison campus, at 6.5 million sq. ft., rivals those of Apple, Google and Facebook in California. “In its design, look and feel for the employee, Epic’s corporate campus is second to none,” says Brandon. “When Forbes did an article on cities winning the battle for information jobs, they said you would expect to find a company like Epic in Silicon Valley, Austin or Seattle. You don’t expect to find Microsoft-like campuses in Madison.”

A Region of Innovators

Over the last decade, 23,000 new jobs have sprung up in Madison in biomedical and biotech; IT; knowledge creation and commercialized R&D; and business and finance.

“About 16,000 of these jobs were created in biotech and IT,” says Brandon. “Couple that with $1 billion of federal R&D occurring at University of Wisconsin-Madison, and you get some serious economic growth. Thanks to the university and Epic, the IT sector is growing. A Department of Labor study shows that Madison has the second highest concentration of software publishing jobs in the country.” 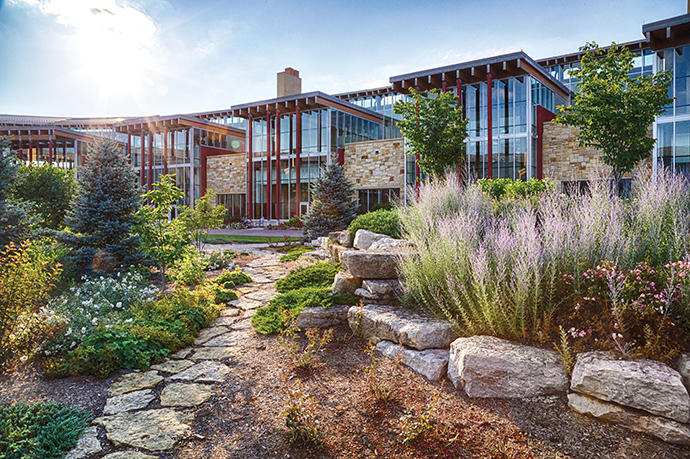 Talent is the great equalizer of regional economies. No one knows that any better than Rhonda Sciarra, senior manager of communications for Mallinckrodt Pharmaceuticals. The Hampton, New Jersey-based company owns Stratatech, a rapidly growing biotech firm in Madison.

A leader in regenerative medicine, Stratatech develops novel cell-based therapeutic products for the treatment of severe burns and other complex skin defects. The technology was developed by Dr. Lynn Allen-Hoffman, who founded the firm in 2000 when it became the first woman faculty member-led spinoff from UW-Madison.

“Stratatech has generated the most Small Business Innovation Research funding of any biotech company in Wisconsin and ranked sixth in the US in total SBIR funding since 2001,” says Sciarra.

When asked why Stratatech thrives in Madison, Sciarra said: “First, it is clear that innovation is a hallmark of Madison and its surrounding communities. Home to the University of Wisconsin’s flagship campus, the region benefits from the university’s leading position in academic research and patents. The community fosters a collaborative environment with multiple partnerships among industry, academia and entrepreneurs. Madison is home to state government and a robust business community.” Stratatech grew from fewer than five employees in 2001 to more than 50 today. “We have found that Madison brings a strong research community and a skilled, diverse and forward-thinking workforce,” says Sciarra. “The talent based in Madison remains integral to Stratatech’s success. We are excited to have recruited numerous talented colleagues from various graduate and doctoral programs of UW-Madison, and the region’s quality of life has helped us attract candidates from the nation’s top universities as well.” 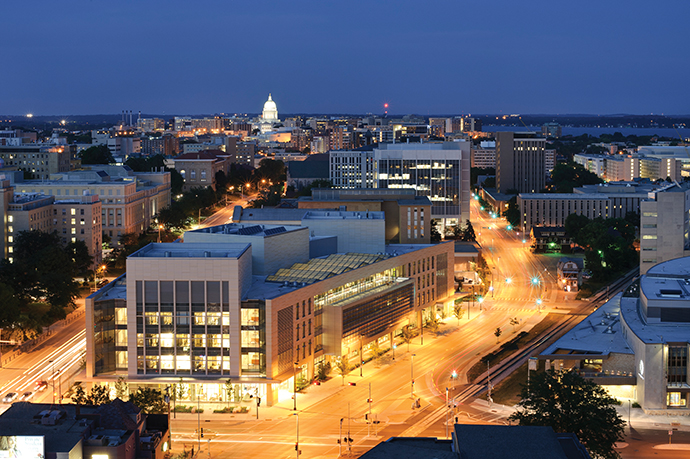 To keep pace with growth, Stratatech expanded into new space at the MGE Innovation Center in University Research Park, where the firm has begun pilot manufacturing. “Concomitant to the clinical development, we will explore a future expansion of this facility,” notes Sciarra.

Stratatech is far from alone. All around the Madison Region, established companies and upstart firms alike are bursting at the seams as they hire talent and experience escalating revenues.

Among them are Catalent Biologics and Illumina. A service provider to mid-sized pharmaceutical companies, Catalent is a $2 billion publicly traded company with 9,000 employees, about 160 of whom work in Madison.

“We are the Center of Excellence for Biologics for Catalent Pharma Solutions,” says Brian C. Riley, general manager of Catalent in Madison. “We are full-service biologics engineering and process development with clinical and commercial manufacturing capability. We hire graduates who have degrees in science, and we hire plenty of Ph.D. and master’s grads too. We will be up to 200 employees in Madison by the end of June.

“We started out as a university spinoff,” says Riley. “Gala Biotech was a UW-Madison spinoff focused on transgenics. We could have put this business in Massachusetts or San Francisco, but instead we chose to make a large investment in Madison. The founders and a very skilled workforce are here. The UW system puts out the science majors we need. We invested $34 million into a 22,000-sq.-ft. expansion of our manufacturing line in Madison, with $1 million in tax incentives from the Wisconsin Economic Development Corporation.”

Riley adds that “the local talent base and the many resources available here were a huge consideration. We vetted the local workforce over two and a half years. It is very hardworking and well educated in the sciences.”

“We have 5,000 undergrad and over 1,400 grad students in engineering. We have the second oldest computer science department in the country, starting in 1964.”
— Susan LaBelle, Managing Director, Office of Corporate Relations, University of Wisconsin-Madison

He notes that Madison Area Technical College “has done a good job of training our workers in our front-line operations. The support we got from WEDC was extremely helpful. They identified technical resources and training for us; and the tax incentives were key.”

Nick Caruccio, general manager of Illumina and senior director of manufacturing, says the company’s Madison location enables the firm to hire the best talent in the field of genomic sequencing.

“Access to talent is the main draw,” he says. “Having a well-formed community around the sciences is central. We are hitting critical mass in being able to recruit here. Our company is based in San Diego, and people are actually moving from San Diego to come work here.”

Caruccio says that being in University Research Park in Madison allows Illumina to prosper. “We have grown the operations here since 2012,” he notes. “We did an initial buildout in University Research Park of 27,000 sq. ft. In 2014, we built another 11,000 sq. ft. to expand our manufacturing operations. In 2016, we expanded into another 30,000 sq. ft. to help support manufacturing. We are now finalizing a plan to build a new campus in Madison.”

URP Adds Value in Many Ways

Illumina has grown its Madison workforce from 55 people in 2011 to more than 100 today. “We expect to add another 20 employees soon,” Caruccio adds. “We are a very technology-heavy company, so we look for people with scientific backgrounds who work in labs. We do high-tech production in bio-chemistry.”

Madison is the perfect fit for this work, he says. “The nucleus of protein expertise was here,” says Caruccio. “Combine that with a university with over 100 years of work in bio-chemistry, and you have a very strong pull. It is easier to attract people here.”

Aaron Oliver, managing director of University Research Park in Madison, says that URP has been a hub of success stories since 1984. “Stratatech is a prime example,” he notes. “A faculty member in one of our labs discovered a way to develop a skin line that lives on its own. The product has no direct competitor in the marketplace. We incubated them from birth to the day they had over 50 employees in Madison.”

Located just 5 miles west of the UWM campus, URP houses the largest concentration of employees in the area outside of state government.

“We serve the needs of the companies and the science coming out of UW. We are building the ecosystems around the strengths of the university,” says Oliver. “We are appealing to companies because we are a helpful partner in facilitating a relationship with UW; the university can provide benefits to companies located in URP; a lot of employers like the idea that their rent is going back into the system that is training their workforce; and we have a great concentration of similar companies.”

This Investment Profile was prepared under the auspices of the Wisconsin Economic Development Corporation. For more information, contact Coleman Peiffer at 608-210-6714 or Coleman.Peiffer@wedc.org. On the Web, go to www.inwisconsin.com.