Arizona Focuses on Encouraging Innovation, Not Regulating It 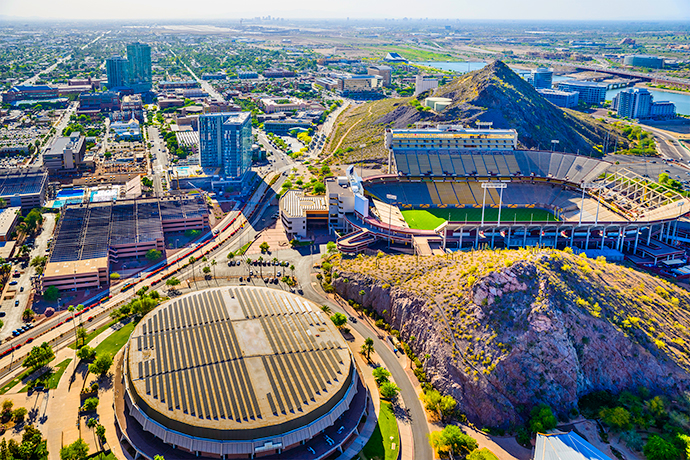 For the second year in a row, US News & World Report ranked Arizona State University, in Tempe, as the country’s most innovative university.
Photo: Getty Images
by RACHEL DURAN 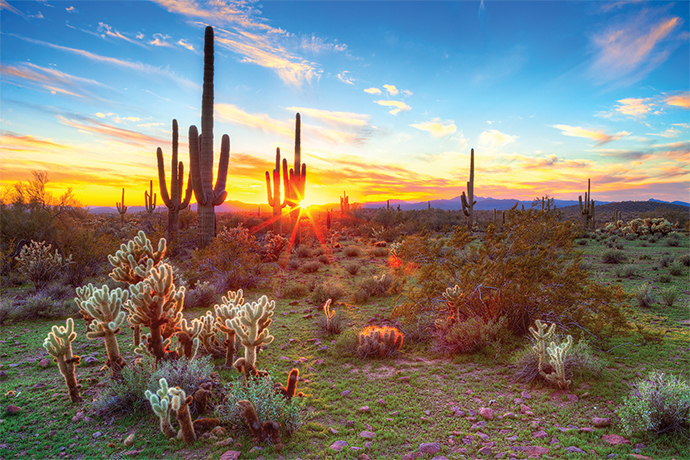 When Intel Corp. made the decision in February to move forward and invest $7 billion to equip its Fab 42 manufacturing facility in Chandler, Arizona, the project capped off a span of significant economic development investment announcements in the state.

Intel’s equipping of Fab 42 and the creation of 3,000 jobs is significant. Started back in 2011, this facility will develop the future 7-nanometer technology, producing microprocessors for use in computers, data centers, sensors and smart and connected devices. The facility will be the most advanced semiconductor facility in the world, Watson notes.

From Arizona, Intel will be able to manufacture 22-, 14- and 7-nanometer products. “It will be a busy place, producing many of our IA microprocessors and supporting IA chips for many years to come,” noted Ann Kelleher, Intel’s vice president and GM of the technology and manufacturing group, in a public statement.

At the Forefront of Innovation

“We are welcoming to new ideas, new technologies and new people from anywhere, and that is evident in the announcements we have made,” Watson says. What’s more, the public university system fosters a supportive climate for innovation. For the second year in a row, US News & World Report ranked Arizona State University as the country’s most innovative university “That is ahead of Stanford and MIT,” Watson says.

Further, Arizona’s leadership is focused on modernizing state government to further advance innovation in the state. Officials aim to eliminate 500 regulations by the end of this year. Arizona’s citizens are posting recommendations at RedTape.AZ.gov on how to improve or eliminate burdensome regulations that stymie growth.

Arizona’s leadership is ensuring the state is well positioned to support disruptive technologies and new industries. For example, the state passed legislation to support crowdfunding, ride sharing and home sharing, Watson points out. In 2015, Gov. Doug Ducey signed an executive order to encourage the attraction of the self-driving vehicle industry.

Watson says Arizona is quickly becoming a testing ground for the emerging autonomous vehicle industry. The state is home to a presence for Google’s spinoff Waymo self-driving car business; GM’s Cruise Automation, and Uber’s fleet of self-driving cars. Two days before Christmas 2016, Uber famously moved its fleet from California to Arizona as a result of regulation challenges in California. In March, an Uber self-driving SUV (with operators in the front) was involved in an accident in Arizona where the driver in the vehicle that struck the Uber car was cited for a moving violation. Testing immediately resumed.

“The gig economy is an area in which we are focused on supporting these new technologies,” Watson says.

Digital entrepreneurs, Web designers and app developers have found a home in northern Arizona, a region with 1-GB internet speeds. Assets include the Tech Track partnership that provides networks and forums to assist startups, and a school at Northern Arizona University focused on informatics, computing and cyber systems.

A unique international partnership between Arizona and the state of Sonora, Mexico, was crucial in Lucid Motors’ decision to select Casa Grande, Arizona, as the site for its $700-million electric vehicle manufacturing plant. The company, which expects to employ nearly 2,200 workers, marks Arizona’s first automotive manufacturing plant.

Watson says Arizona was not only able to demonstrate to Lucid Motors’ officials that the company could competitively operate from the state, but it could also take advantage of the state’s value proposition and assets surrounding the state, such as the supply chain in Sonora.

Arizona’s value proposition is also attractive to the advanced business services industry. For example, ADP Inc. announced it will invest $34 million in Tempe for a regional headquarters where it will add 1,500 new jobs. ADP is also expanding its Tucson operations by 450 jobs, Watson adds.

Watson also points out Arizona’s attractiveness to corporate headquarters operations. One advantage is the state’s available room to grow. For example, JLL recently named Phoenix as the No. 27 city out of 30 for its global real estate investment intensity. The list compares the volume of direct commercial real estate investment in a city during a three-year period relative to its current economic size.

Headquarters project highlights include Rogers Corp.’s August 2016 announcement for the relocation of its corporate headquarters from Connecticut to Chandler, where it will invest $17 million in a facility. A leader in engineering materials, the company already has a manufacturing operation in Arizona. This winter, Carlisle Companies Inc. announced it would relocate its corporate headquarters from Charlotte, North Carolina, to a new office space in Phoenix. The diversified manufacturing firm will create 130 new jobs.

In May 2016, Caterpillar announced it would locate its surface mining and technology division’s headquarters to Tucson, creating 600 new jobs. Downtown Tucson also was selected for the new North American headquarters for Hexagon Mining, an information technology provider for the mining industry. The company employs 140 staff in Tucson and plans to add 120 jobs during the next several years. The company also intends to invest $9.4 million in the project, leasing 26,000 sq. ft. (2,415 sq. m.) at the City Park building. The announcement “emphasizes the strength of the region’s ability to leverage our mining legacy for excellent local jobs, especially those using cutting-edge technology,” said the chair of the Pima County Board of Supervisors Sharon Bronson, in a statement.

The aerospace and defense sector is another Arizona legacy industry.

Expansion highlights in the sector include two projects from Orbital ATK Inc. Last November the company announced 500 new jobs at its facility in Chandler; a year ago the company added 155 jobs in Gilbert, Watson says.

In other activity, Raytheon Missile Systems announced a significant expansion in Tucson, where it will invest $500 million and add 2,000 new jobs. Vector Space Systems is locating a manufacturing facility in Pima County. The micro satellite space launch company will create 200 jobs.

Hexcel will invest $85 million in an expansion of its Casa Grande operations, adding new facilities, machinery and equipment. The aerospace industry manufacturer will create 146 new jobs.

Watson says the expansions show that the state has the highly skilled talent base required by these companies. Workforce training received a boost in February when three community college systems — Maricopa, Pima, and Central Arizona College — signed a charter to develop a standardized technology curriculum to advance manufacturing activities in the state. The colleges have partnered with companies such as Raytheon, The Boeing Co., and Lucid Motors to develop courses. 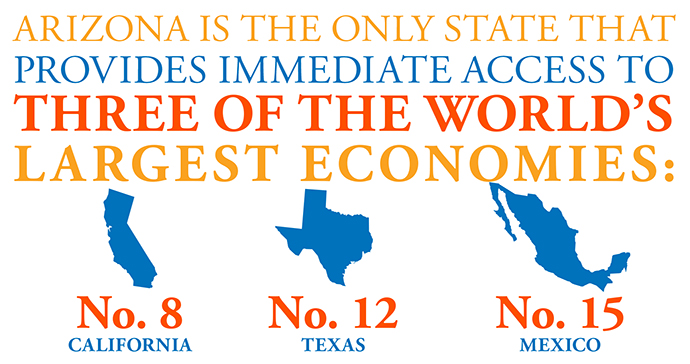 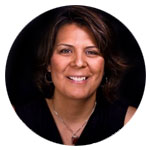