How to Finish First

When Sebastian Vettel roared to victory in the Gulf Air Bahrain Grand Prix in April, he won with a strategy the host kingdom knows well: He surged ahead early and never let up. Vettel, driving a blazing red Ferrari, bested 19 other Formula One racers, crossing the finish line as fireworks lit the night sky.

Bahrain, like Vettel, knows how to take a lead and hold it. Long a front-runner in the oil and finance industries, the island kingdom in the Arabian Gulf is solidifying its spot as a business destination by re-tooling at full speed.

Among an intriguing array of modern “firsts,” Bahrain can lay claim to these:

Bahrain’s central position makes it a hub of logistics and commerce within the six-nation Gulf Cooperation Council.

The superlatives don’t end there. Bahrain is listed as a high-income country by the World Bank. With no corporate tax and no personal income tax, it is the lowest-levied country within the Gulf Cooperation Council, the wealthy trade block that also includes Saudi Arabia, Kuwait, the United Arab Emirates, Qatar and Oman. It is the top MENA nation for telecom infrastructure and ranks number-one globally for mobile network coverage. Just for good measure, Bahrain is the first Middle East nation to host a Formula One auto race.

It’s an impressive list of feats for a nation just four times the size of Washington, DC, with a population of 1.35 million, about half of whom are expatriates.

GATEWAY TO THE GULF

“It’s easy to do business here,” says Brian Howard, a partner in the London-based international law firm, Trowers & Hamlins. Howard has worked in Bahrain since 2006, advising clients in corporate finance, company and group structuring and joint venture arrangements, in addition to a wider range of commercial and contractual matters.

“Bahrain’s principal advantage for any business considering the region is taxation,” says Howard. “Bahrain doesn’t impose taxation on income or capital returns. There are no taxes in relation to remittances, and the transfer of funds in and out of Bahrain is unrestricted.

“There’s a great workforce in Bahrain,” Howard adds. “Bahrainis are a pleasure to work with. They’re skilled, bilingual, even multi-lingual, so sourcing employees is unusually easy, even for a business such as ours.”

A simple look at a map reveals another of Bahrain’s singular advantages: location. A constitutional monarchy under the rule of King Hamad bin Isa Al Khalifa, Bahrain lies in the virtual center of the GCC and enjoys easy access to Saudi Arabia, the region’s economic giant.

“If you’re looking to expand,” says Al Rumaihi, “you should recognize that the Gulf Cooperation Council is a market of about $1.5 trillion. That’s the size of GDP that would be in India or Canada, so it’s quite a large geography in terms of wealth and consumer spending power.

“Saudi Arabia, by virtue of its oil,” says Al Rumaihi, “is the giant of the GCC. Outside of being in Saudi, Bahrain is the closest location by car to commute from, and a lot of investors have chosen to base their operations in our country not for our market, but to access the Saudi market.”

In contrast to other members of the GCC, Bahrain allows 100 percent foreign ownership in most sectors, which saves firms considering locating in Bahrain from having to seek out local partners. It also offers among the lowest operating costs of any GCC member and a progressive but stable regulatory climate that has helped to propel its financial sector into a leadership position in the Arabian Gulf. 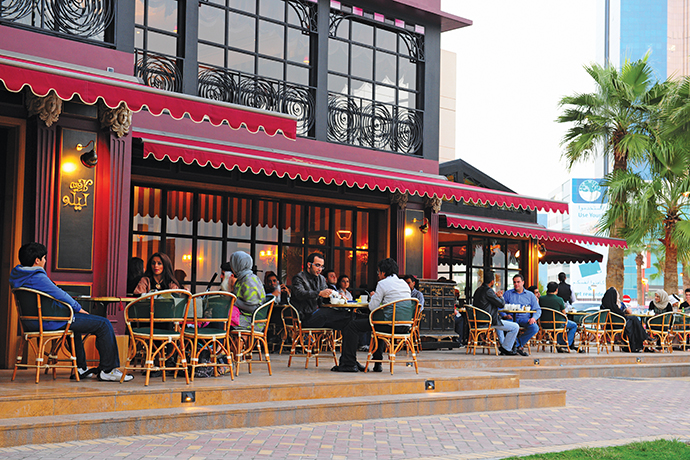 Relaxing at a Manama cafe: “Bahrainis are an exceptionally friendly people.”

“When I arrived here in 2006,” says Howard, “Bahrain was already the center of the financial industry in the GCC. This is where the banks were looking to establish themselves. It’s where their products were being set up and regulated.

“Today,” says Howard, “we get inquiries regularly from people who want to set up their businesses in Bahrain. Bahrain has a long-established funds industry and models for funds which keep expanding and growing, which means that GCC banks and institutions regularly consider Bahrain as a domicile of choice for funds setup. It’s recognized by investors across the GCC as having a substantial record of establishing these structures, of returning money to their investors in a favorable way, and yet having the oversight of a regulator that will look after the investors’ interests.”

A KNACK FOR BANKING INNOVATION

Bahrainis are known throughout the Gulf region as innovators, and their pioneering of Islamic banking speaks loudly to the reputation for entrepreneurship. Islamic law forbids the charging of interest, so Islamic banks make their money by financing trade and construction projects in partnership with their depositors. Bahrain Islamic Bank was established in 1979 as the kingdom’s first Sharia-compliant lender. According to the World Bank, Sharia-compliant financial assets are estimated at roughly $2 trillion globally and growing at up to 12 percent per year.

Bahrain’s 24 Islamic banks, the highest concentration of Islamic banks in the Middle East, account for 13 percent of the kingdom’s total banking assets, covering asset management, bond issuance and insurance. In 2014, the ICD-Thompson Reuters Islamic Finance Development Indicator named Bahrain as the GCC region’s leading Islamic finance market and the second out of 92 countries worldwide, after only Malaysia. It ranked Bahrain’s Islamic bank governance as the best in the world.

Manama, the lively and cosmopolitan Bahraini capital, is one of the top financial centers of the Middle East and North Africa.

Bahrain’s knack for trying things new is spilling over today into the field of financial technology, and most visibly in the government’s planned adaptation of the “regulatory sandbox,” a financial services model adopted within the past year in Hong Kong, Singapore, Australia and the UK. Under the sandbox framework, financial service providers can test new products, business models and delivery mechanisms free from standing regulatory strictures. It allows existing financial institutions and, importantly, newcomers, to experiment with cutting-edge financial services and to offer products and services with mitigated risks to consumers and the banking system as a whole.

“We need to have regulations,” says Al Rumaihi, “that will allow us to cater to these companies without being heavy on the regulatory side.”

By the fall, says Al Rumaihi, Bahrain also hopes to have launched a FinTech incubator and accelerator, as well as a FinTech venture capital fund.

On 270 acres (110 hectares) of reclaimed land, the port receives cruise ships, general cargo ships and container ships, and has a capacity of 1.1 million TEUs, with an average processing time of under an hour. A highway links the port to the well-travelled King Fahd Causeway, the 16-mile (25 km) bridge that connects Bahrain to eastern Saudi Arabia.

Schmidt Middle East Logistics, JLT, a global logistics and transport firm 100-percent owned by Germany’s Schmidt Heilbronn, set up shop next to the port in 2014 in the 100-acre (247 hectare) Bahrain Logistics Zone (BLZ), a hub of third-party logistics, storage and distribution. 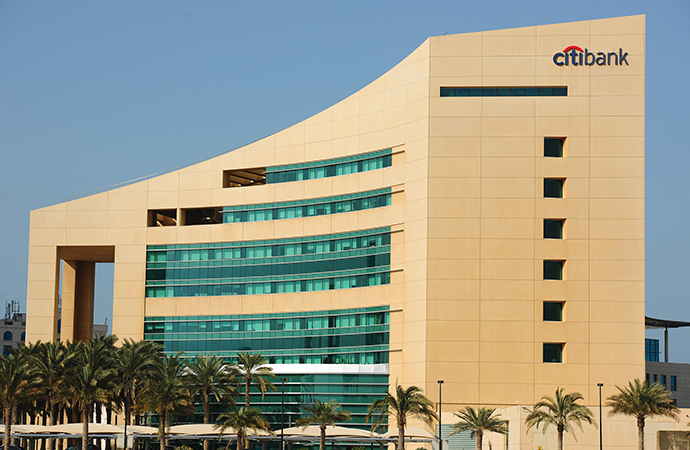 “The handling fees in Bahrain are 40 percent to 50 percent less than the handling fees I have in the other big ports in the region. The environment in terms of taxes, fees and duties is very comfortable compared to the rest of the Gulf region. Economically, Bahrain is very competitive.”

Schmidt ME’s biggest customer in the region is the chemical giant, BASF, for which Schmidt provides warehousing, handling and shipping of chemical additives to the massive petrochemical complex in the Saudi port city, Jubail.

“With our location in Bahrain,” says Hoppmann, “we can guarantee shipping to Jubail within 12 hours after picking up the product at our facility. In practice, it usually takes about six to seven hours.”

At the north end of Muharraq Island, Bahrain National Airport serves as the country’s air hub and base for the national carrier, Gulf Air. Last year, the airport began a $1.1-billion expansion, which will add a new terminal and will upgrade the existing facility by 2020. The initial phase of the project is expected to increase the airport’s capacity from the current 9 million passengers per year to 14 million passengers per year.

Construction is booming throughout Bahrain, and the sector has vaulted into the top echelon of drivers within the Bahraini economy, with the airport project being but a single plank in an ambitious infrastructure buildout valued at $32 billion over the next five years. In addition to housing, water and roads projects, plans call for a $5-billion modernization of the county’s Bapco oil refinery at Sitra, which is to boost processing capacity from 267,000 barrels per day to 360,000 barrels per day, and a $3-billion expansion of the giant Alba aluminum smelter, which will become the world’s largest single smelter site when a sixth potline is added in 2019.

Still in the planning stage, with hoped-for completion in 2023, is a second bridge to Saudi Arabia, to be named the King Hamad Causeway. Bahraini officials say the causeway will also include a rail link, and will offer another boost to commerce between the two countries, just as the King Fahd Causeway did when it was completed in 1986.

Without fail, expatriates who live and work in Bahrain reserve a priority spot on the list of the kingdom’s attributes for the Bahraini people themselves. They speak highly of the country’s indigenous workforce, and more broadly, they marvel at the openness, tolerance and genuine friendliness of the Bahraini national character. In Manama, the cosmopolitan capital city of 157,000 residents, places of worship include not just mosques, but churches, Buddhist temples and what is believed to be the only synagogue on the Arabian Peninsula. English is the business language spoken, and the city’s lively cafes and restaurants are alcohol-friendly.

“Any island is usually very welcoming” says Khalid Al Rumaihi. “Going back hundreds of years, the Bahraini people, even then, have been shipping, trading and welcoming wayfarers.”

“The people of Bahrain,” says Trowers & Hamlins’ Brian Howard, “are exceptionally friendly and inquisitive. Bahrain has been dealing with international trading arrangements and foreign traders for centuries, and because of that the Bahraini people have learned how to interact with and look for opportunities with foreigners. That’s why so many expatriates and foreigners are doing business here.

“We’ve been associated with Bahrain for 50 years,” says Howard, “and we’ve never regretted our decision to be here.” 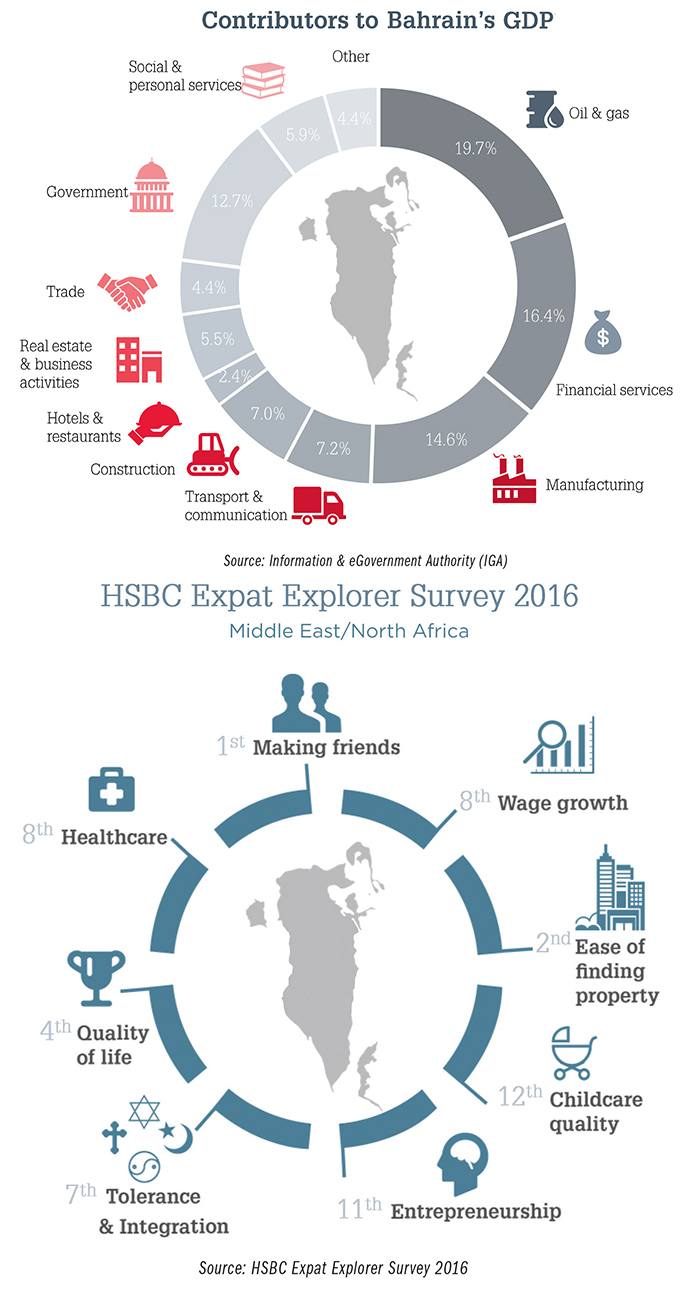