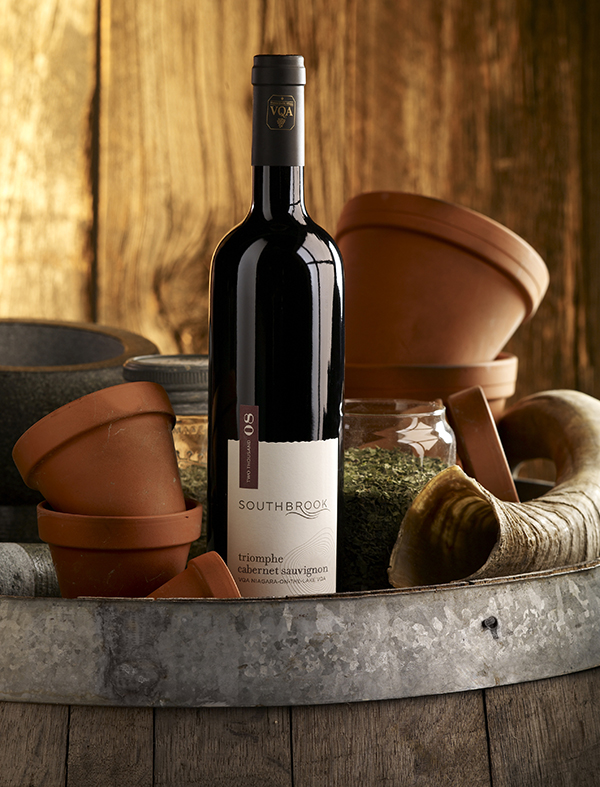 So reads the description of the biodynamic farming methods in place at Southbrook Vineyard, a completely organic winery in the beautiful Niagara-on-the-Lake region of Ontario that uses no synthetic pesticides, no chemical fertilizer, no bioengineering and no genetic modification. It uses much less water and less energy because of its methods, including in its LEED-Gold pavilion.

The only thing Southbrook uses more of than other wineries is probably sheep.

“We use the sheep to keep the growth down,” says Southbrook founder Bill Redelmeier, noting the 125 ewes on property. “We just bought our first mower in 10 years,” mainly to cut the small plot of grass near the winery’s entrance sign.

The sheep serve as landscape professionals and providers of wool that gets sent to MacAusland’s Woollen Mills in Prince Edward Island, which uses it to make high-quality wool blankets. Juliet Orazietti and her husband Martin Weber operate Linc Farm@Southbrook, which sells the blankets, and also is taking orders for fresh, humanely raised lamb at $8.99 a pound.

Redelmeier likes the idea of such virtuous cycles, which are not only sustainable but enticing: Among the ideas he’s nursing is filming grape harvests and then providing a link to the film that customers can click on when they open the bottle.

Redelmeier met me and other delegates of the Americas Competitiveness Forum in fall 2016 as part of a week-long tour of southern Ontario. A University of Guelph graduate, he and his wife Marilyn moved their wine venture (already using Niagara region grapes) from a family cattle farm north of Toronto to Niagara-on-the-Lake in 2005 when they bought a 74-acre (30-hectare) vineyard, then doubled their land holdings in 2008.

The Niagara region’s infrastructure for bio-agriculture goes beyond its special soil from the Niagara escarpment, and includes Vineland Research and Innovation Centre; Brock University; and the unique blend of scientific and culinary curricula, equipment and expertise at Niagara College. About 9 million visitors come to the region annually, and not just to visit Niagara Falls. The region’s arable land has a location quotient for agriculture that’s 630 percent above average.

The region’s growth environment isn’t restricted to just food and wine: Tweed, the fast-growing medicinal marijuana company, operates Tweed Farms in the area, boasting what it calls the world’s largest marijuana greenhouse. Plans are already being developed for a second building on site to allow on-site harvesting and processing.

Bill Redelmeier emphasized how unique it is for a winery to be both organic and biodynamic.

“We plant by the phases of the moon,” he said. “Most sprays we use are herbal teas,” mainly from willow bark. Biodynamics emphasizes the balance and interrelationship of a farm’s soil, plants and animals to grow low-impact, vibrant crops, including grapes, the winery’s literature explains. It treats the whole farm as a single living entity.

Redelmeier buys from nine of the 10 organic growers in Ontario. The total value of grapes from the Niagara region was C$64 million in 2015. He spends about $4,000 per ton to grow grapes (vs. about $28,000 in California). The winery generally yields about 125 cases of wine per acre, and that’s about where he likes it — the higher the yield, the lower the quality, he says.

The biggest challenge limited supply. “We had to turn down Marks & Spencer in the UK,” he said, even though Canadian wines command a premium price there. The winery now sells about 90 percent of its product in the region.

But the market for organics is growing like a vine. According to the Organic Trade Association’s 2016 US Organic Industry Survey, total organic food sales in 2015 were $39.7 billion — up 11 percent from the previous year — and accounted for around 5 percent of total US food sales.