The shale revolution is lifting the fortunes of Gulf Coast ports. 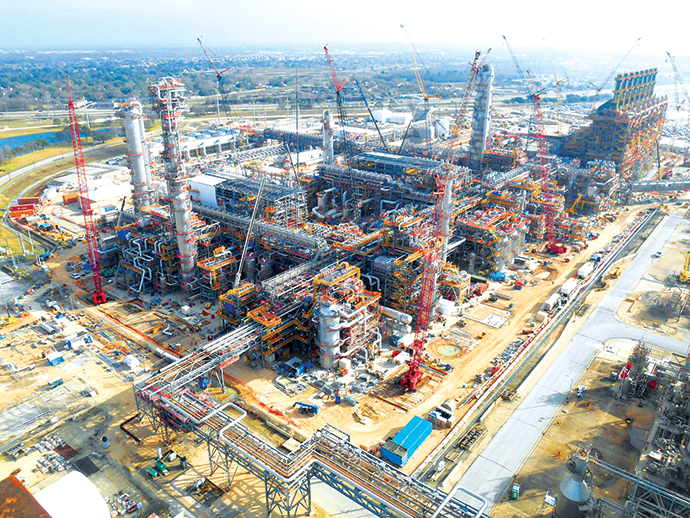 The $10-billion investment by ExxonMobil and SABIC in Corpus Christi will be called Gulf Coast Growth Ventures.
Photo courtesy of ExxonMobil
by Gary Daughters 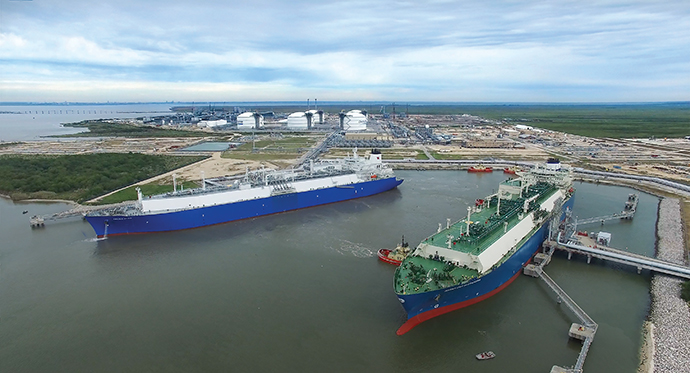 When Darren Woods, CEO of ExxonMobil, announced a Gulf Coast spending spree in a speech in Houston in March, those applauding most loudly included President Trump. Before the announcement was hours old, Trump delivered hosannas via Twitter, including one post that appeared to assume at least a measure of credit for the investments the company is making and the jobs to be created.

Never mind that the projects outlined by Woods all began under President Obama, and under the ExxonMobil leadership of Woods’ predecessor, Rex Tillerson, now Trump’s secretary of state.

Whomever the credit is due, ExxonMobil’s “Growing the Gulf” initiative is, to borrow a word, “ ‘uuuge.” But buried in the hubbub were details of what the company plans to do with its $20 billion. Much will occur in and around the port of Beaumont, Texas, with plans to expand plastics production, oil refining capacity and production of liquefied natural gas (LNG). The 11 projects include:

“In the chemical business you need a competitive feedstock and a market to sell your products in,” Chapman told Jones-Kelley just after the official announcement of the project in Corpus Christi on April 19. “There is not a lot of demand for chemical growth in this country, so the market is the developing countries. You have to be able to compete against the local chemical provider in China.”

The breakthrough in the United States came with the huge discovery of shale gas here and the technology to extract it and process it into critical feedstock for the manufacturing of plastics and other petrochemical building blocks of so many products that are in demand worldwide today, says Chapman.

“Natural gas liquids allow us to process these chemicals in Corpus Christi and ship it cheaply to China,” says Chapman. “We compete in a global economy and we are bringing lots of jobs and capital investment to the United States. The administrations in Washington and Texas are very supportive of this project and we are in this for the long term.”

The project would include an ethane steam cracker capable of producing 1.8 million tonnes of ethylene per year, which would feed a monoethylene glycol unit and two polyethylene units, providing the building blocks for polyester, anti-freeze, plastic bottles, and food packaging to emerging global markets. The partners now will apply for the necessary permits to proceed. If built, the project is expected to create 600 new full-time jobs, 3,500 indirect jobs and thousands more jobs during the construction phase. It is also expected to generate more than $22 billion in economic output during the construction phase and more than $50 billion in economic output during the first six years of operations.

Al-Benyan agreed that cost-competitive feedstock was a big factor, as were other necessary ingredients such as the talent and contractor ecosystem. But he noted other factors that were more important. 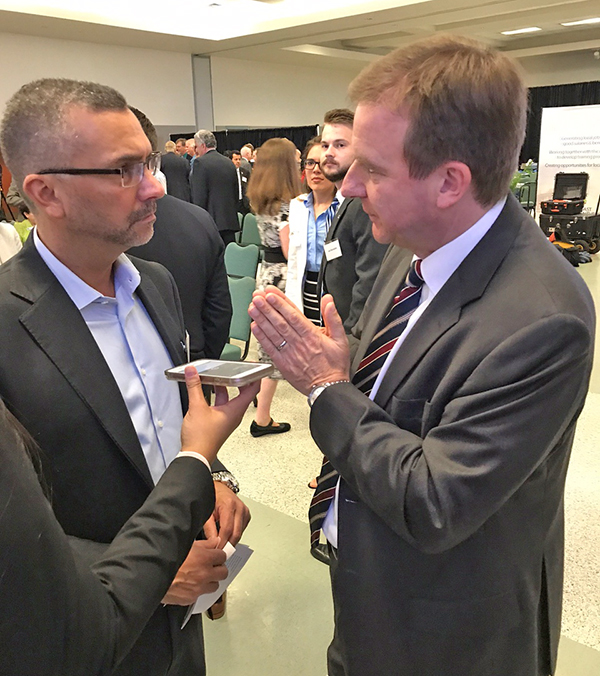 “Texas is known to this industry and they understand what this industry values,” he said. We’ve been in Texas for more than 35 years. So that makes us very comfortable to expand.” That’s the same amount of time the two companies have worked together on JVs in Saudi Arabia.

Chapman said that there is a “tremendous resource base in Texas for hydrocarbons. We are taking molecules made in Texas and turning them into products that help people in the developing world.” That model is not going away in the next 10 years, he adds. “Access to logistics, rail and a deepwater port, a very positive workforce, and how open this community was to bringing in this project made Corpus Christi the winner of this investment,” Chapman said. “This is a 40-to-50-year play. There were a lot of communities and states that were pulling for this project to come to their area.”

The site in San Patricio County beat out three other sites in Texas and Louisiana.

“The large area of land with a single owner, its ready access to rail and deep water port facilities, the existing infrastructure, its proximity to raw materials, a positive business climate and a ready workforce for construction and operations made this our preferred site,” said Rob Tully, GCGV venture executive, at the announcement.

In his interview, Al-Benyan said other states and communities can learn a valuable lesson from the project: “You need to understand the values the project brings and understand whom you are dealing with,” he said, noting the company’s longstanding if understated commitment to local communities. Other territories may soon get to act on that lesson, as SABIC’s growth strategy calls for being one of the top three players in North America by 2025.

“As of now this is our primary focus,” Al-Benyan said of the Gulf Coast joint venture, the company’s first major growth project in North America. The company also acquired GE Plastics in 2007 and has assets retained from that transaction. “In terms of other projects, North America is a very important region for SABIC’s growth strategy, and we are looking for other options,” he said. “There are some other opportunities we are entertaining.”

The investments aren’t occurring in a vacuum, says Professor Eric Smith, associate director of the Energy Institute at Tulane University in New Orleans.

“In one word,” Smith tells Site Selection, “the driver for all this capital spending along the Gulf Coast has been the shale revolution, which is still growing.”

Exxon Only One Part of Equation

Among other notable projects along the Gulf Coast is the recently completed LNG export terminal at Sabine Pass, built at a cost of $6 billion by Houston-based Cheniere Energy. The facility initially was conceived as an import terminal, but Cheniere changed course to seize advantage of changes in US law and abundant shale production. Completion of the years-long project in 2016 made Cheniere the first exporter of liquefied natural gas in the lower 48 states.

Downstream chemical and plastics production is booming as well. In late March, French energy giant Total announced the launch of a joint venture with Calgary-based Nova Chemicals Corp. and Vienna’s Borealis petrochemical company to build a $1.7-billion ethane cracker in Port Arthur, Texas, and a new polyethylene plant in Bayport, Texas. Total says the venture, contingent on regulatory approval, would start in 2020 and create at least 1,500 local jobs.

In a nod to President Trump, Bernard Pinatel, Total’s president of refining and chemicals, told the Associated Press that the company is seeking to leverage the benefits of an “American administration favorable to everything that touches the energy sector.” Occidental Petroleum and Dow Chemical are to complete ethane cracker projects along the Gulf Coast this year.

Baytown, Texas is one of the Gulf Coast communities that’s welcoming the shale revolution with open arms. The port city of 80,000 residents is readying infrastructure for three of ExxonMobil’s planned 11 Gulf Coast projects, including the new ethane cracker that’s to provide feedstock for two new polyethylene units at the nearby Mont Belvieu plastics plant.

“Our philosophy,” says Baytown Mayor Stephen DonCarlos, “has always been that the investment by ExxonMobil in our petrochemical complex is good for the long-range viability of the city. It improves our financial position and it sends a signal to us and other investors that Exxon is here for the long haul.”

Chevron Phillips is pumping money into Baytown as well, with multiple investments totaling $6 billion. Projects include an ethane cracker unit at the company’s Cedar Bayou plant and upgrades to its polyethylene facilities there. Combined energy investments in Baytown, which also include projects by Enterprise Products Partners and Covestro, are changing the face of the city.

“We currently have over 20,000 construction workers here,” DonCarlos tells Site Selection, “and our studies have shown we can expect to retain about 20 percent of those as permanent residents. The long and short of it is we’ve got around 3,000 housing starts in various stages of development.”

Adam Jones-Kelley and Ron Starner contributed to this report. 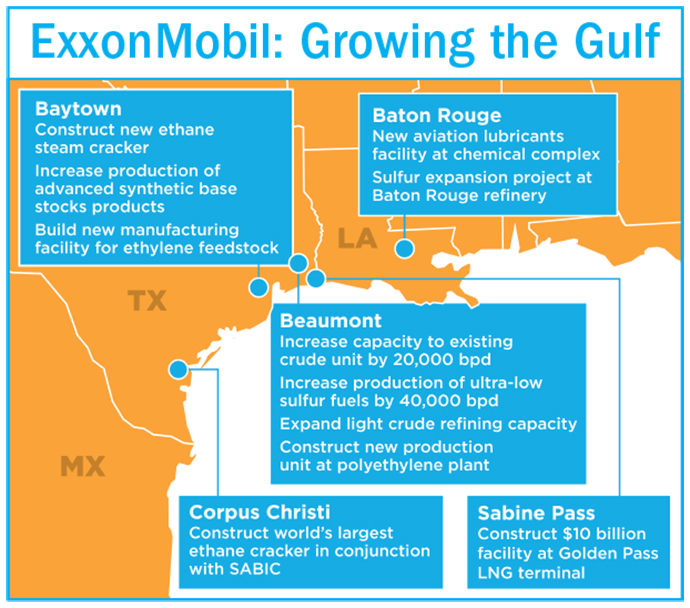