Iowa investments from one corner to the other cover every link of the food chain. 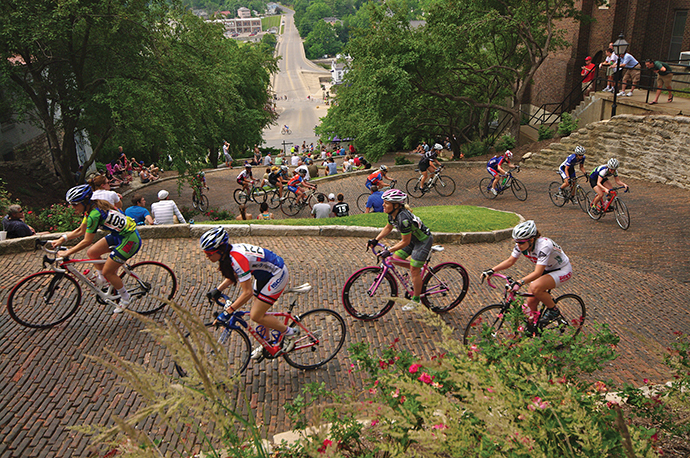 The route to completion for Iowa’s two new fertilizer plants was not nearly as arduous as the Snake Alley Criterium in Burlington, where every year top cyclists from around the world come to take on the “crookedest street in the world” (including a brief 19-percent grade) 11 times during the 9-mile race.
Photo courtesy of Iowa Tourism Office
by ADAM BRUNS

Two fertilizer plants on opposite sides of Iowa mirror each other with their company names as well as their stateline locations near the Missouri and Mississippi Rivers: CFI in Port Neal, near Sioux City in the state’s northwest quadrant, and IFCo in the Lee County town of Wever in southeastern Iowa. Together they represent $5 billion in cumulative investment.

CFI just launched production. And just in time for U.S. Senate confirmation hearings on Iowa Governor Terry Branstad’s appointment as U.S. Ambassador to China, he received a nice send-off as he presided over official production launch at OCI’s IFCo site in April.

While CFI in Sioux City expanded upon an existing complex, the IFCo project is the first world-scale, greenfield nitrogen fertilizer facility built in the US in more than 25 years, and will produce approximately 1.5 to 2 million metric tons of nitrogen fertilizer products annually.

At the peak of construction, IFCo employed more than 3,500 workers and currently employs more than 200 full-time positions to operate the plant.

“The start of production at Iowa Fertilizer Company plant in Wever is a transformative moment for the agricultural industry,” said Nassef Sawiris, CEO of OCI N.V. “Given its location among the highest nitrogen-consuming acres globally, on the border between Iowa and Illinois, the number one and two corn-producing states in the nation, the site houses not only a premier production facility, but also an industry-leading distribution center.”

“At the outset of the Iowa Fertilizer project [in 2011], the unemployment rate in Lee County was the highest in the state at 8 percent,” said Governor Branstad, citing that as motivation to fight for the investment. “Today, the county’s unemployment rate is down nearly three points to 5.3 percent, providing a positive and meaningful impact on working families in the area.”

The two plants represent just a portion of the complete food cycle woven through so many industry sectors in the state, from agricultural equipment makers to the new Seaboard Triumph Foods pork processing plant in Sioux City, where soon some 22,000 hogs a day will be processed, after having been fattened with food that at some point benefited from fertilizer’s help.

CF Industries at one point was on the way to purchasing the North American and European operations of Netherlands-based OCI for $8 billion, but the deal was canceled in May 2016 by the companies, citing new U.S. Treasury guidelines that will penalize corporate inversions, by which companies re-incorporate in a foreign country in order to lower their taxes. The canceled deal would have resulted in a new company based in the Netherlands.

In Port Neal, CFI Plant Manager Nick DeRoos this spring took me on a pickup-truck tour of the now-operational CFI site (currently with 274 employees) as a few of what will be 400 trucks a day at peak pulled in to fill up with granulated urea.

“We had a peak of 5,500 employees on the site” during construction, DeRoos said. “Product is now being delivered throughout the Dakotas, Iowa and Minnesota.”

The grand finale of the CFI tour was a peek inside a huge storage building where the urea poured down into white mountains like sugar pouring into brown paper bags. The pile totaled about 10,000 tons of granulated urea, in a building long enough to hold 150,000 tons. Multiply the mountains times the going rate per ton, and you’re talking $25 million worth of gleaming white product, destined to help the fields of the Midwest yield millions of dollars more in agricultural products for humans and for animals, as the cycle begins all over again.