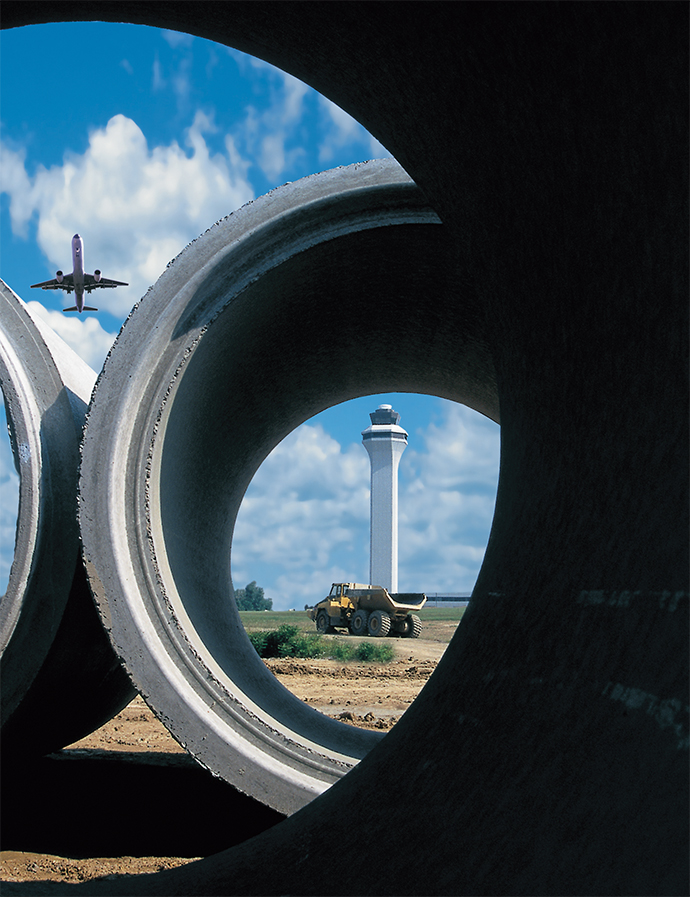 Business climate improvements, incentives and an accommodating airport add up to a prized delivery for the Bluegrass State.

If Gov. Matt Bevin was looking for a signature win to confirm his extreme makeover of the Kentucky business climate, he found it on January 31.

Seattle-based Amazon, the world’s largest e-commerce retailer, announced that day it would establish a $1.5-billion air cargo hub at the Cincinnati/Northern Kentucky Airport in Hebron.

Employing 2,700 people at a 900-acre (364-hectare) site being leased for 50 years, the $136-billion company committed to an investment that is the largest in the history of Northern Kentucky. Amazon has stated that the average hourly wage at the air hub will be $26 plus benefits.

“As we considered places for the long-term home for our air hub operations, Hebron quickly rose to the top of the list with a large, skilled workforce, centralized location with great connectivity to our nearby fulfillment locations, and an excellent quality of living for employees,” Dave Clark, senior vice president of worldwide operations for Amazon, said at the announcement. “We feel strongly that with these qualities as a place to do business, our investments will support Amazon and customers well into the future.”

While Gov. Bevin and his Kentucky Cabinet for Economic Development may not have envisioned a win quite that grand when he took office on December 8, 2015, Bevin tells Site Selection that the project is the culmination of a lot of hard policy work.

“I’ve made a top priority of continuing to improve Kentucky’s business climate,” the governor said in an exclusive interview just days after Amazon’s announcement. “Measures to cut red tape, improve workforce preparedness, bring more people into the labor force and pass right-to-work legislation all directly address that goal, and more are in the works. By their nature, almost all economic development projects necessarily take into consideration a significant number of factors, including a state’s business climate.”

On various business climate scorecards, Kentucky remains on an upward trajectory. According to the annual Site Selection Business Climate Survey published in November, Kentucky ranked No. 14. With 231 corporate facility investments in 2016, the Bluegrass State ranked seventh overall and second per capita.

That’s not good enough, says Bevin, who adds that he will cut even more taxes and eliminate even more burdensome regulations in 2017. Among his top targets is the inventory tax (see sidebar).

Amazon already operates 11 sites in the commonwealth. Its latest endorsement of Kentucky may one day rival what UPS has created in Louisville and what FedEx has established in Memphis. Noted site consultant Mike Mullis, founder and principal of J.M. Mullis Inc. in Memphis, says the Amazon project at CVG Airport in Hebron makes sense for many reasons.

“We have been using the term transformational to describe this project. What has happened in Louisville with the UPS Worldport can happen here in Northern Kentucky.”
— Dan Tobertge, President and CEO, Northern Kentucky Tri-County Economic Development Corporation

“Northern Kentucky has been grossly under-utilized as a logistics center,” he says. “Amazon needs large tracts of land, and Northern Kentucky was able to offer a very large piece of property at an airport with major runways capable of handling state-of-the-art aircraft.”

Mullis adds that Amazon “did not want to get into an airport with a lot of competition. They site their projects based on population density. Workforce demographics, workforce capability and a very generous incentive package from the state all made a difference. Plus, the governor is extremely aggressive. He got right-to-work legislation passed in the first week of the legislative session this year, and he continues to work to improve the business climate.”

The $40-million incentive package from the Kentucky Cabinet for Economic Development sealed the deal. “Incentives were important in terms of looking at the speed that Amazon works through this process,” says John Bevington, Kentucky’s deputy commissioner for business development. “It was important for them to have a partner that acted quickly and facilitated the incentive programs. They played an important role in offsetting the issues that Amazon would incur. The value that we could provide in terms of our flexibility was as important as the amount we offered.”

One Airport Wins, One Loses

Northern Kentucky beat out Wilmington Air Park in Ohio and at least one other unnamed site to land the project — a fact that did not make Ohio Gov. John Kasich happy.

“They were very worried about workforce,” Kasich said at a press conference in Columbus on Feb. 1. He said his administration tried as hard as it could to win the deal but could not dictate the final decision by Amazon. “They’re still going to be here in our region,” he added.

CVG officials, meanwhile, celebrated the news as a game-changing development for the airport and surrounding bi-state region. “The opportunities are limitless,” says Candace McGraw, CEO of CVG. “We’re excited to see what is in store for growth and additional businesses wanting to locate in the area. DHL has been a great partner and has added a lot to our cargo operations. CVG cargo and passenger landed weight are currently split 50/50. We’ve been able to lower our landing fees by 44 percent over the last four years. With additional landed weight that Amazon will add, it will help drive down landing fees even more, and all carriers will benefit from that.”

Amazon and DHL, in fact, are teaming up. Amazon struck a deal in March with the German shipping giant, which in May will begin shipping the retailer’s products. This is believed to be the first critical step toward Amazon establishing its own Prime Air cargo hub at the airport.

CVG has experienced rapid growth, culminating in a $4.4-billion economic impact in 2016, according to a report by the University of Cincinnati and Northern Kentucky University. That is a 22-percent gain from 2012. CVG also marked its 70th birthday in January by adding Southwest Airlines as its newest carrier, beginning service there on June 4. 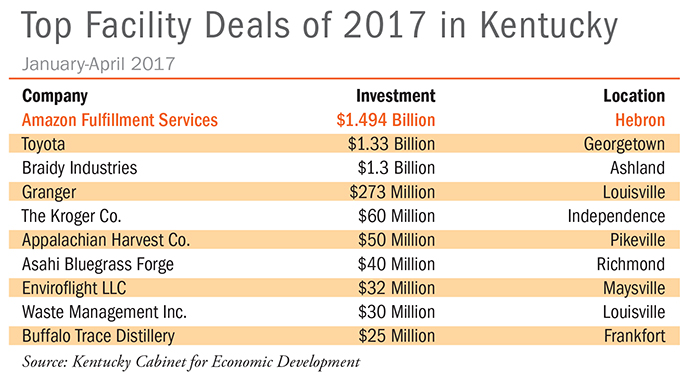 Next Up for Kentucky:  Incentives & Tax Reform 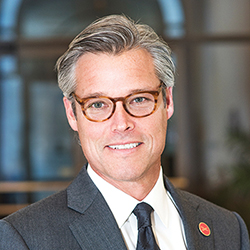 Terry Gill, Secretary, Kentucky Cabinet for Economic Development
Kentucky’s leaders celebrated for a little while on Jan. 31 before turning their attention back to what won the state the Amazon air hub in the first place: business climate.

This year, that means incentives and tax reform. In a frank conversation with Site Selection, Terry Gill, secretary of the Kentucky Cabinet for Economic Development, discussed the measures the Bevin administration will pursue following the Amazon deal.

Can you provide an update on the Amazon Prime Air Hub project in Hebron?

GILL: Several regulatory agencies are working on this project right now, including the FAA and state agencies. Everything appears to be right on plan. They are moving forward with site preparation and a lot of coordination with general contractors. Next focus is on staffing. DHL announced that it is partnering with Amazon. Amazon will use their facilities as DHL staffs up to meet that new need.

Can you detail the incentives that Amazon will receive as part of this investment deal?

GILL: The preliminary deal is for $40 million in corporate tax incentives and wage assessments. All of these are tied to job creation metrics. We have very specific targets that must be met over the next 10 years tied to job creation, average hourly wage, and the total investment. It is all performance-based.

Will Kentucky adopt any new incentive programs this year?

GILL: We are looking at an extended legislative special session this year to look at tax reform. How do we reform our tax code in order to remain competitive? It will include some discussion on incentives.

How has right-to-work legislation impacted your state since Gov. Bevin signed it into law in early January?

GILL: The best way to describe it is that it has clearly changed the business climate and it has opened up more opportunities as a direct result of that. Even today, we are in a multi-site meeting with a very large company that is considering starting a new facility here in North America, and they would not consider any state other than a right-to-work state.

Can you provide an update on the Cut the Tape initiative?

GILL: It has been very successful. We have cut just under 400 regulations or amendments. We are on track to meet the 30-percent reduction target. I have been out of the country in Japan, Switzerland and Germany. In those cases we met with foreign companies that have significant investments in the state. We want to make this the easiest state for them to make investments. We have given away a lot of red pins. Because there is a language barrier, when they see the red tape and scissors, they always ask, “What is that?” The concept of cutting red tape seems to translate very well.

Will the Governor push for any specific tax reform measures this year?

GILL: The inventory tax is universally disliked. It presents a particular barrier because inventory is part of any business’s working capital. They are always worried about the cost of holding inventory. They would rather not have it. But we are taxing them on top of that. That is at the top of our list for elimination this year. 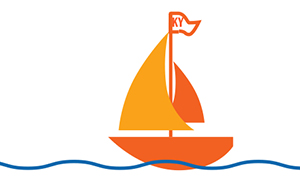 In just the first four months of 2017, corporate investment in Kentucky eclipsed the prior year’s total and quickly approached the $5.1 billion all-time record from 2015.

At nearly $4.9 billion, 2017 investments through April, which represent announcements new corporate facilities and expansion projects by existing locations, include three projects each north of $1 billion.

In January, Amazon announced its $1.5-billion Prime Air shipping hub in at the Cincinnati/Northern Kentucky International Airport. The project is expected to create 2,700 full and part-time jobs in the state’s distribution and logistics industry.

In early April, Toyota announced its $1.33-billion Reborn project for the Toyota Motor Manufacturing Kentucky plant in Georgetown. Over the next few years, the Reborn project will replace or refurbish equipment and add new technology in multiple manufacturing areas, preparing Toyota’s largest plant for production of the 2018 Camry and future models. The project will help the plant maintain its 8,200 full-time employees and drive further growth in the state’s automotive industry.

Factoring in Kentucky’s more than 40 other corporate investments announced through mid-April, the Bluegrass State eclipsed its 2016 full-year investment of $3.1 billion. Then, in late April, Braidy Industries unveiled plans to build a $1.3-billion aluminum mill near Ashland in northeastern Kentucky’s Greenup County.

Braidy Industries will construct a 2.5 million-sq.-ft. (2332,250-sq.-m.) aluminum mill on a 330-acre (133-hectare) greenfield site. The company expects construction to begin in early 2018 with completion in 2020. Construction will create about 1,000 jobs and the plant will employ 550 people full-time. Initially, the facility will produce about 370,000 tons of aluminium sheet and plate per year for the automotive and aerospace industries.