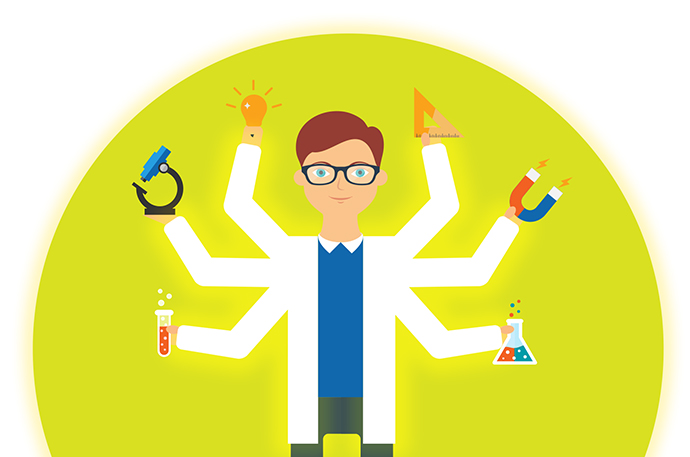 As global pharmaceutical firms continue to see healthcare demand, price control policies and drug development costs rise (around $1.5 billion from idea to commercialization, says Deloitte), they need the right locations and the most effective networks more than ever before. 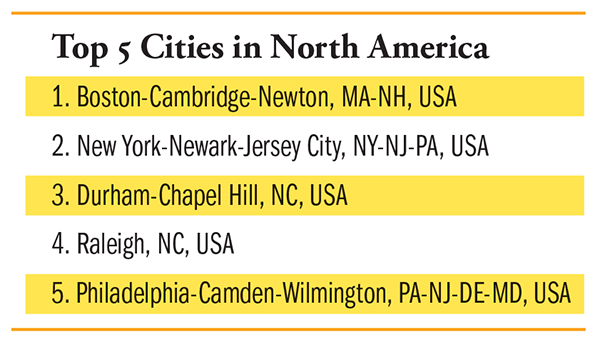 The 2017 edition of The World’s Most Competitive Cities — just published by Site Selection publisher Conway, Inc. — finds that the world’s leading life sciences cities tend to be home to clusters of superior universities graduating clusters of superior talent, and also fostering collaborative partnerships with companies. The top five cities in each of six world regions appear on these pages, determined first by corporate facility project tallies over the past several years drawn from the Conway Projects Database, then the limning of those results by data and analysis contributors EY and Oxford Economics. 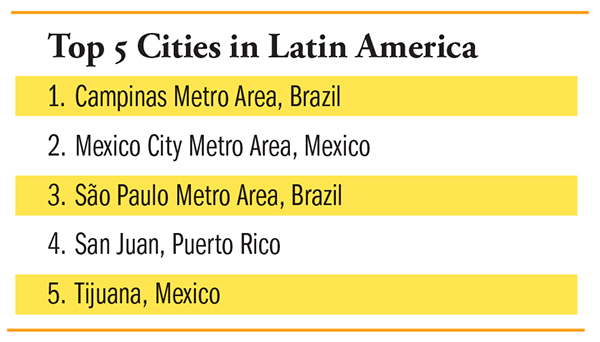 “Life sciences is joining other industries in which companies have turned to open innovation (OI) and other collaborative models as a way to fill in-house capability gaps and overcome R&D and marketplace challenges by externally sourcing innovative ideas, knowledge, skills, and technologies,” said the Deloitte report. And whether the partners come from government, academia, biopharma or the startup crowd, “according to a Deloitte analysis, there is a three-fold probability of success when drugs are sourced via OI.”

As EY’s 2016 Beyond Borders report found, either Cambridge (in the UK or in Greater Boston) is a solid bet for biotech investment. The same can be said of life sciences investment in general, as both Greater Boston (No. 1) and Cambridge, UK (No. 4), find themselves among the leaders in their respective world regions. New York and traditional Research Triangle powers Raleigh and Durham-Chapel Hill follow Boston in North America, with Greater Philadelphia also in the mix.

From Emerging to Fully Hatched

The World’s Most Competitive Cities results for Western Europe were led by Berlin, Dublin and Barcelona, with Cork, Ireland, finding fifth position. The Irish cities have seen recent investments from Grifols, Mallinckrodt and Takeda in Dublin, and by BioMarin in Cork. In Eastern Europe, Warsaw, Budapest and Skopje, Macedonia, top the rankings. Warsaw’s recent roster of expansions has included investments from AstraZeneca, Banner Service Corp. and Symmetry Medical. 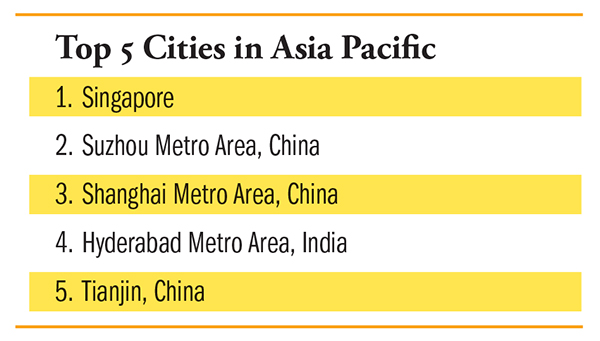 Cairo and Nairobi top our charts in Africa and the Middle East, while Campinas and São Paulo are No. 1 and No. 3, respectively, in Latin America, sandwiched around No. 2 Mexico City. However, notes Dan Levine of Oxford Economics, getting life sciences firms to invest in emerging markets is a tall order. “In many emerging markets, poor patent regulation and intellectual property protection discourage investment that might otherwise migrate from developed economies,” he writes. “This is particularly true in research and development functions where a combination of rising costs and drugs targeting smaller markets is discouraging investment.”

That conclusion finds corroboration in Pwc’s 20th survey of global life sciences CEOs, released in March. The markets showing the most growth potential, say the CEOs, are the US, China, Germany, Brazil and the UK, in that order, followed by Japan and Russia.

As for M&A by multinationals (MNCs), “life sciences companies should still look for openings in markets with significant access constraints and unmet needs — within Latin America, Southeast Asia and Africa, for example,” says Deloitte. At the same time, however, “governments in emerging markets such as China, Russia, and Southeast Asia also can make it difficult for MNCs to increase their global footprint by instituting policies that promote locally produced drugs and encourage domestic companies to invest in pharmaceutical manufacturing.” 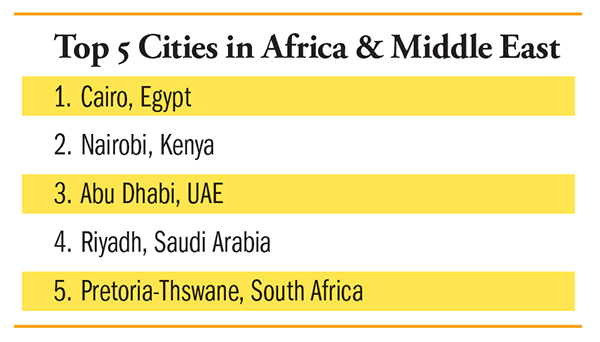 Looking for the opposite dynamic? Then look to global life sciences beacon Singapore, which frankly tops most lists when it comes to prime life sciences locations. That’s why Abbott Labs, DSM and GSK, among others, continue to invest and grow in the ultimate city-state, where pharma and biotech have grown by more than 30 percent since 2011. 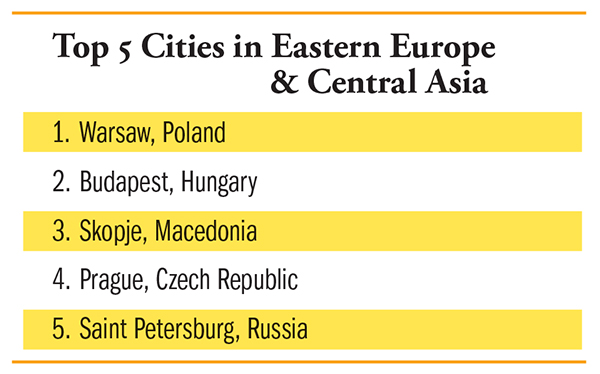 Worldwide pharmaceutical R&D spending totaled $149.8 billion in 2015, reported Deloitte, and is expected to grow by 2.8 percent annually to $182 billion in 2022. And corporate project rosters in top-ranking Asian cities other than Singapore — Suzhou, Shanghai and Tianjin in China, and Hyderabad in India — show how emerging markets are increasingly about research as much as manufacturing. Companies currently leaning more on developed markets are wise to take note.

As Deloitte’s report puts it, “For the past two decades, the United States was considered the world’s leading funder and innovator — providing up to 70 to 80 percent of global life sciences R&D funding. Yet in recent years, the country has had a major decline in its R&D competitiveness, with other nations (especially those in Asia) more actively competing and investing in various elements of the value chain.” 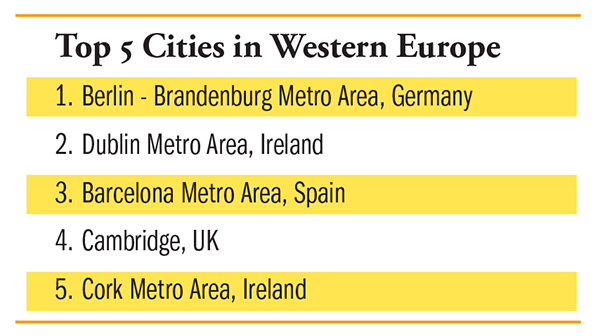 Yet even that surge comes with a universal caveat: access to the right talent. Pwc’s survey shows availability of skills among CEOs’ top concerns, alongside over-regulation, speed of technological change and cyber threats.
“Government efforts to boost domestic innovation and localized manufacturing in nations like Singapore and Russia are frequently stymied by a lack of qualified in-country talent,” Deloitte reports. “Singapore, for example, is tightening the approval process for work visas, and companies may need to revisit their operations in Singapore if appropriate staff cannot be employed. Other Southeast Asian governments are working to ease restrictions on the movement of labor, but it remains to be seen if and how quickly those efforts will meet the region’s talent needs.”

If indeed the top cities start to falter, competing clusters and institutions from every world region — from areas such as Chongqing, Saitama, Melbourne and Ho Chi Minh City in Asia; Lyon, Munich and Liverpool in Europe; San Diego, Chicago and Montréal in North America — are ready to pounce.

The death of a legal structure that has served biopharma for years means it’s time to re-evaluate assets and locations in Europe.

The impending exit of the UK from the European Union and rising differences between countries that want more integration versus countries that are looking towards reducing the influence of the EU administration on domestic regulations, combined with declining governmental spending on healthcare, are generating significant challenges for biopharma firms. More than ever, they have to carefully evaluate which countries offer the best business environment and most stable political environment.

The European Single Market — one of the main achievements of the European Union, which celebrated its 60th anniversary on March 25th of this year — is commonly seen as a success, even by the country which decided to leave. The European Medicines Agency (EMA) is a good example of how, through centralizing regulatory tasks, the European Union has established a well-functioning agency which efficiently serves the biopharma industry and its clients in the interest of the public health across the European Union. But one new regulation affects a popular business model for biopharmas called commissionaire structure, which will soon lose its operational benefits.

In this model — established by many life sciences companies with operations and clients across Europe — a local distributor sells products in its own name but for a principal company in another country. The commissionaire does not take legal possession of the goods it is selling. This structure is largely credited with providing great operational benefits.

However, fueled by the OECD, which developed a set of recommendations on how to avoid base erosion and profit shifting (BEPS) by multinational companies, OECD member countries started to question whether the activities of a commissionaire could constitute a taxable presence. To make things even more complicated, the EU introduced new regulations such as the EU Falsified Medicines Directives, which require an alignment of invoicing and legal flows. Together, this could potentially mean the death of the structure that has greatly served the biopharma industry in Europe for several years.

Biopharma firms often have key value drivers such as manufacturing, R&D, marketing and distribution spread across different countries in Europe. A new operational and tax model to replace the commissionaire structure should offer a way to efficiently manage such complex value chains. A solution lies in another acronym: LRDs — Limited Risk Distributors — as part of the so called buy-sell model. In contrast to a commissionaire, an LRD takes legal possession of the goods it is selling. And when properly set up, a LRD does not constitute a local taxable permanent establishment of the principal company.

The operational and tax benefits of the commissionaire structure are about to vanish in 2017. In parallel, the regulatory changes are entering into force in 2018. Looking at these two developments, every biopharma company that uses a commissionaire is therefore well advised to implement a transformation project in the current year. What sounds like a simple reshuffling of some legal and tax structures is in reality a major operational and administrative undertaking, including aspects such as new working capital needs; intercompany financing strategies; management of inventory treatments; processes for free goods, returns and scrap materials; reconsideration of the inter-company remuneration strategy; IT infrastructure and the change control environment (change control is the process used to request, review, specify, plan, approve, and implement changes to a system).

Combined with the new and additional regulatory requirements such as import licenses and wholesale distribution licenses in each country with an LRD, the conversion from commissionaire to buy-sell can only be successful through a strong coordination among the finance, tax, IT, legal and supply chain teams involved in such a project. Conversions of such complexity consume significant resources both in terms of time and people.

But Is It All Bad?

The biopharma sector stands at a crossroads, with the traditional biopharmaceutical business model at risk. The two seismic shifts that are set to disturb the status quo in the industry are the pressure to drive drug prices down and a shift from treatment to prediction, prevention and complete cures. In the future there will be three distinct pharmaceutical archetypes:

Active Portfolio Company: Typically active in several therapeutic areas within its portfolio, the company is equipped to acquire and divest parts of its portfolio in a flexible and agile way.

Virtual Value Chain Orchestrator: Companies that primarily own data and don’t own anything tangible. These platforms will be the new way to link supply with demand.

Where the journey will go for biopharmas currently operating under complex operating and tax models remains unclear. Maintaining maximum flexibility in the operational and tax set-up, however, is mandatory to successfully venture into these uncharted areas. A conversion project as described above — based on detailed value chain analysis — is ideal to prepare the organization as a whole for upcoming business transformation projects of all kinds. 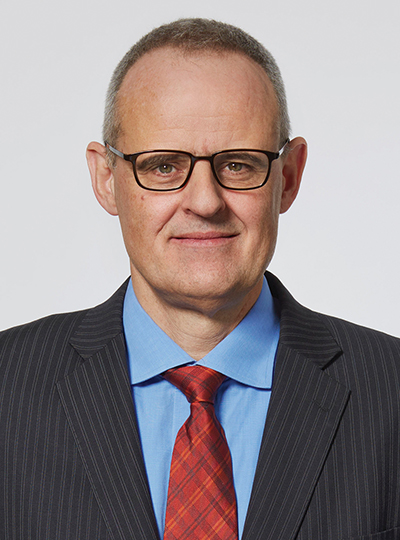 André Guedel, Head of Business Development, Tax, for KPMG AG in Switzerland, advises multinational companies on choosing the location of their key value drivers, and works predominantly with groups from North America and the Asia Pacific with expansion or relocation plans in Europe. He also edits the biannual “Site Selection Report for Life Sciences Companies in Europe.”