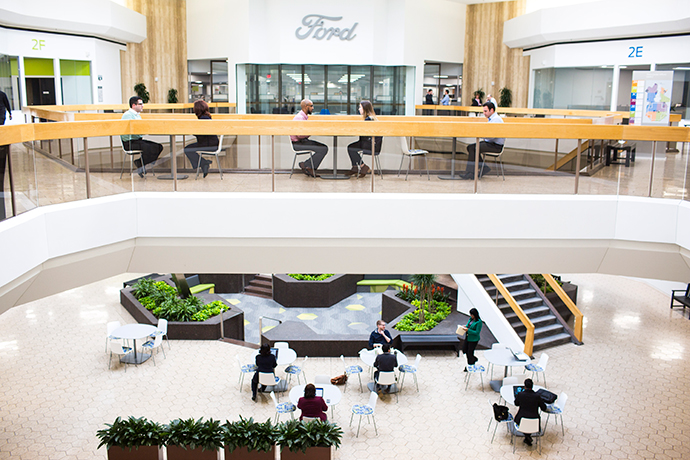 As it pursues a 10-year world headquarters transformation, Ford is putting the nearby Fairlane Town Center Mall to use, converting unused mall space into its new Town Center Office where 1,800 employees will work.
Photo courtesy of Ford Motor Co.
by ADAM BRUNS

A spirit of repurposing and renovation is fortifying carmakers’ sense of purpose and innovation, bringing billions of dollars into play across North America. Peek into the towns synonymous with these manufacturers and you’ll glimpse transformations underway that affect a lot more than mere production lines.

Ford fans look fondly back to the Ford Fairlane, manufactured in Dearborn from 1955 to 1969. Today, just down the road from the Rouge River that gave Ford’s legendary plant its name, Ford is putting the Fairlane Town Center Mall to use, converting unused mall space formerly occupied by as many as 26 retailers into its new Town Center Office, where 1,800 Ford engineering and purchasing employees are stationed. The move comes as the company pursues an overall Dearborn campus transformation that will co-locate 30,000 employees from 70 buildings into primarily two campus locations, one devoted to products and one to Ford’s world headquarters. Some have estimated the total cost of the 10-year transformation project at over $1 billion.

“The proximity and design of Fairlane Mall, along with its on-site amenities, support our transformation in offering multiple conveniences for our employees said Dave Dubensky, chairman and CEO, Ford Land. “It is a win-win for us and the community.”

Reuse is rampant. Ford Land also is leasing transitional work space for nearly 1,000 employees at the soon-to-be-former HQ of home improvement products manufacturer Masco in Taylor, as Masco itself moves to a new headquarters in Livonia. Ford also is leasing a Masco retail store adjacent to the HQ. And Fiat Chrysler is moving its Maserati HQ from New Jersey to the former Walter P. Chrysler Museum in Auburn Hills.

Part of the Vision

Indiana and Kentucky also are seeing serious rejuvenation. Toyota Motor Manufacturing of Indiana (TMMI) in January announced plans to invest $600 million in its Princeton operations, creating up to 400 new jobs by the end of 2019. Toyota Motor Manufacturing, Kentucky, Inc. (TMMK) announced in April it would invest more than $1.3 billion to make its Georgetown plant the first in North America to begin producing vehicles using Toyota New Global Architecture (TNGA).

“This $1.33 billion investment is part of Toyota’s plan to invest $10 billion dollars in the US over the next five years, on top of the nearly $22 billion Toyota has invested in the US over the past 60 years,” said Jim Lentz, CEO of Toyota Motor North America.

Like Ford in Dearborn, TMMK is also into repurposing for the good of its communities.

Three properties at Lanes Run Business Park in Georgetown, totaling nearly 22 acres, as well as $1 million for future land purchases, are being donated to further advance the area’s economic development vision for the area. Additionally, Toyota is committing $2 million over the next 10 years to Scott County United — a non-profit formed way back in 1985 when Toyota announced the plant.

It’s not just OEMs getting in on the facility recycling trend. Fuyao Glass in October celebrated the opening of its newest US facility in Moraine, Ohio, a $450-million complex housed in GM’s former assembly plant that will be the largest glass fabrication plant in the world, with the capacity to produce 4 million automotive car sets and 4 million automotive replacement glass windshields each year. Employing 2,000 last fall, Fuyao expects this number to grow to as many as 2,500 by the end of 2017.

Fuyao also plans to invest $100 million in Plymouth, Michigan, to turn a facility once operated by American Blind & Wallpaper Factory Inc. into an automotive glass plant and R&D center where it hopes to bring nearly 1,000 jobs by 2019.

The Golden State has never hesitated to point out that, while its roster of auto manufacturing may be light, its population of visionary car designers is large indeed. One new project continues that tradition while also blowing it out of the water.

Karma Automotive announced in April it has purchased the building in Irvine that once was Kawasaki Motors USA’s HQ from Bixby Land Co. for $56 million, and plans to locate a global headquarters there for 600 employees.

“It’s important for Karma to have a headquarters that reflects the brand for our employees, business partners, and customers, and will provide an environment that attracts new talent as we continue to grow,” said Cameron Adamson, CFO of the young maker of luxury plug-in hybrids. “This investment in addition to the Moreno Valley production plant reinforces Karma’s commitment to being a true California car company.” 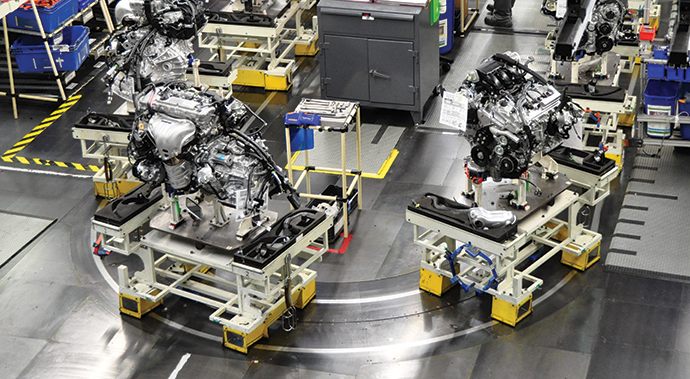 Toyota’s $1.3-billion investment in its plant in Georgetown, Kentucky, will modernize and update a complex employing 8,200, an all-time high. The company is also donating facilities in Georgetown and Erlanger for community repurposing.
Photo courtesy of Toyota