‘Ohio Is at the Center of It’ 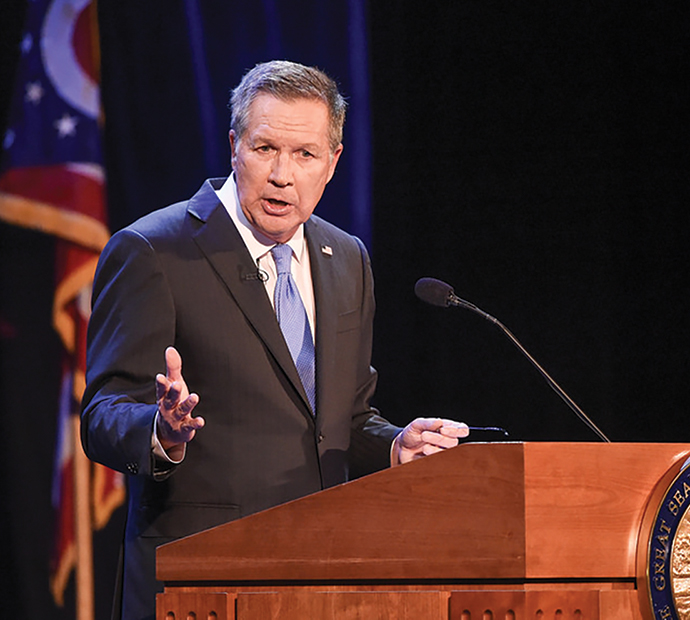 If you only paid attention to Ohio during the run-up to presidential elections, you’d think it was the most important state in the Union. This swing state is regularly deemed the “must win” state for a campaign to emerge triumphant from the election, as most past elections illustrate. But much goes on in the Buckeye State between general elections that doesn’t make national headlines. Paying attention to Ohio between the elections reveals an economic comeback from the Great Recession that shows no signs of letting up. For the past four years, Ohio has ranked second in overall projects according to Site Selection’s Governor’s Cup rankings, and it regularly finishes near the top in projects per capita — it placed third in that category for 2016 activity, as was reported in the March issue.

Ohio attracts significant capital investment — 515 projects in 2016 — for several reasons: a diverse economy, no corporate income tax, top universities, corporations investing heavily in talent acquisition and a logistics infrastructure complete with air cargo hubs, river and Great Lake ports, rail and Interstates connecting Ohio metros to most of the US population within a day’s drive.

Governor John Kasich outlined a few more reasons, and some other news you may have missed, on April 4th in Sandusky, where he delivered his State of the State Address at the historic State Theatre. Excerpts of the governor’s address making the case for Ohio as an engine of economic development appear in the following quotes.

“Our greatest moral purpose as governmental leaders is to create an environment of job creation in which people can have work, in which people can support their families. And I can think back just a short six and a half years ago … we’d lost 350,000 jobs. That’s, you know, like — that’s filling Ohio Stadium, you know, three, four — three times, plus. We had an $8 billion deficit, and I went to New York to the rating agencies and they said, ‘We’re going to tear up your credit cards.’ I said, ‘Give us a chance.’

“Now, this is old news to many of you, but I’m saying it again because we do have members of the legislature here who never went through that experience. And you remember that experience. It was tough. It was trying, and we came out stronger. Now we are up 460,000 new jobs in our state.”

“We’re working to create a more diversified economy. Why? So that when one sector goes down in a tough economic time, another sector can lift us up. It’s called diversification, and we really do believe in it. Now, manufacturing and agriculture, of course, they matter. They’re two cornerstones of our state, but they’re changing as well. Look at the auto industry. Engines and transmissions are more powerful, durable, and efficient — more efficient than ever … In aviation, breakthroughs are making jet engines quieter and cost less to operate, and think about GE down in Cincinnati making those engines. It’s pretty awesome.”

“Just down the road in Norwalk, the German auto parts maker Borgers has spent $60 million on a new state-of-the-art plant that will create jobs for more than 230 workers, earning $8 million in payroll. And near Dayton, the giant Chinese auto glassmaker Fuyao transformed an abandoned car factory. The auto company left. It was an old factory. And now Fuyao has gone in and transformed that operation and they now employ more than 2,000 Ohioans, who supply all the major automakers with advanced glass. This is great news for us.”

“You know Amazon: Amazon Prime, Amazon Now, Amazon cloud computing. It’s just amazing. They’re an amazing innovator, combining highly trained workers and best in class processes, and they’re turning retailing inside-out. They have three cloud computing operations in the United States, three operations in the whole country. They’ve got one on the West Coast out in Seattle, one on the East Coast in Virginia, and the third one is located right here in the good old state of Ohio. A major cloud-computing operation.”

“Here’s what’s really astounding that I’m sure most don’t know. Amazon Now has hired 6,000 Ohioans to work in their operations, and we believe with more to come. That’s looking towards the future. We have Explorys. Explorys is a fast-growing leader in the health data analytics field. Data analytics: We study stuff and we know what works. You get knee surgery, we know if you get a shot in that knee, you’ll heal faster than if you don’t. They use data to figure out the ways in which to best treat people. It was a startup operation at the Cleveland Clinic and was purchased by IBM Watson. Here’s the beauty of it. Instead of IBM Watson trying to move this operation out of Ohio, they’re planning it right here. They’re not going anywhere. They like what they see in Ohio.”

“There’s Cardinal Commerce, a leader in financial technology and digital commerce that just opened a new headquarters in Mentor. And Interstate Chemical, which is investing more than $50 million in a new plant in the city of Oregon, not too far west of here. And Alkermes, a pharmaceutical manufacturer, and what they’re doing is … developing products to battle addiction worldwide. These job creation stories and more like them demonstrate the way our state, with JobsOhio’s support, is attracting businesses of the 21st century from a range of different industries. Now, think about it. Not just agriculture, not just making things, but it’s across the board. That’s what’s given strength and resilience to our state.”

“Last fall, a survey of CEOs named Ohio one of the 10 best places to do business. Last fall. That’s 34 places higher than we ranked in 2010. So when they start looking around the country about where we’re going to create a business, we went from 34th to one of the top 10 [business locations].

“Forbes ranked us the 11th best state for business. That’s up from 38th. So we went to 11th with Forbes, from 38th just five years ago. And there have been other good ratings, like the one from middle market executives — that’s sort of middle-sized companies — that placed us first in growth in the country. And this is all great, of course, but we can’t stop now.”