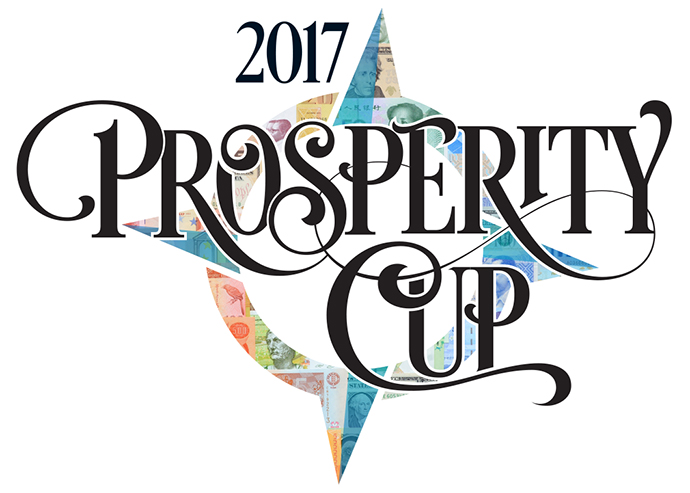 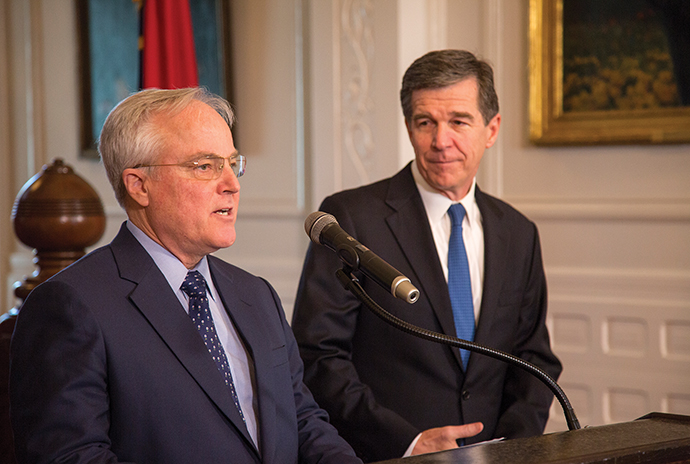 North Carolina winning the Prosperity Cup again this year will come as a shock to some. It tied with Texas for the win in 2016 and placed first in 2015, when the ranking was still known as the Top Competitive States. The state’s strong showing in this measure of state economic development agency effectiveness is not new (see the methodology on page 102). But it may confound those who had written off the Tar Heel State as a business-climate backwater after its House Bill 2 — the “bathroom bill” — sat on the books from March 2016 until a compromise bill cleared the air in late March 2017.

HB2 prevented municipalities from enacting ordinances that exceeded or varied from state-mandated restrictions on restroom use by transgender individuals and was therefore deemed discriminatory. National sporting events booked at North Carolina venues bailed, some companies pulled the plug on expansions or relocations, and the lights went out in the state as a destination for capital investment.

Well, the last part didn’t actually happen — not by a long shot.

In fact, North Carolina ranked fourth nationally in total new and expanded facility announcements for 2016 in Site Selection’s March 2017 Governor’s Cup ranking, with 289 projects. It ranked seventh nationally in the per capita Governor’s Cup tally of projects for the year — these performances are unchanged from the previous year.

HB2 didn’t change the strategic significance of a North Carolina location to companies already there, nor to most considering it a potential addition to their real estate portfolios. It still has one of the most educated workforces in the US; a temperate climate; two international airports, including a major hub for American Airlines at Charlotte, which is also a top financial center; three coastal ports; a desirable mid-Atlantic location; top research universities and community colleges and a 3 percent corporate income tax rate — the lowest such rate east of the Mississippi other than Ohio, which imposes a gross receipts tax in lieu of corporate income tax.

Regardless, the bill was an albatross around the neck of those championing the state as a location for facility investment, particularly the administration of newly sworn-in Governor Roy Cooper. Its repeal in late March couldn’t have come soon enough: “I just signed House Bill 142, which repeals House Bill 2,” said the governor on March 30th. “For over a year now, House Bill 2 has been a dark cloud over our great state. It has stained our reputation. It has discriminated against our people. And it has caused great economic harm to many of our communities. Today, we repealed House Bill 2. We begin to end discrimination. We begin to bring back jobs and sporting events. And we begin to repair our reputation.”

North Carolina’s new Secretary of Commerce, Anthony M. Copeland, elaborates: “When Governor Cooper brought me in to work with him, his first priority was to reverse the damage that had happened with HB2,” he tells Site Selection. “Through sheer will and perseverance and working with the leaders in the legislature, legislation was passed [in April] that put us back on the right side of history. We’re moving forward now. That is the mark of a new beginning and new leadership and a new vision to see and create the future. Governor Cooper demands that of all who work for him.”

Copeland says other fixes are in the works, as well.

“First, we had Amendment 1, then we had the disruption of the Department of Commerce by dismantling it and creating a public-private partnership. Then we did not renew incentives for a period of time. All of that is back on track, and we’re ready to move forward. I know we’re on the right side of history. Hopefully, the previous few years will be a blur to people.”

Are site selectors noticing? “Corporate investors now are saying they are ready to move forward,” says the secretary. “They took a deep breath, they looked at what had happened, and by and large the global corporate world is ready to get back to work in North Carolina. We have a [project] pipeline that’s in place and will be materializing rapidly as a result of putting that behind us. We’re excited. Trilliant clearly said they were prepared to announce now and were not going to launch prior to that. Several projects are now taxiing on the runway that were parked for a while, waiting to see that the Administration delivered on its promise to put us on the right side of history. They have done that.”

On April 18th, Trilliant Networks announced it will establish its global headquarters in the Research Triangle Area, creating 130 jobs over the next five years. The smart grid software and communications company will invest $1.8 million at its current offices in Cary to accommodate this expansion of corporate operations. Trilliant offers the energy industry’s only enterprise-wide Smart Communications Platform for connecting the internet of things (IoT) through a secure, standards-based, multi-technology, open-spectrum solution.

“The Research Triangle is a globally recognized technology community of more than 350 clean tech companies, and offers some of the brightest and most innovative talent for a high-tech company like us,” said Trilliant CEO Andy White at the announcement. “By establishing our global headquarters in the Research Triangle, we are adding our footprint to other world leading technology companies as we continue leading innovation in Utility and IoT communications.”

Trilliant will hire several positions to support world-wide operations of the company. Salaries will vary by position, with a total annual payroll impact of more than $13 million. Wake County’s overall average wage is currently $53,783 per year. N.C. Commerce and the Economic Development Partnership of North Carolina led the state’s support for the company’s expansion, which will be facilitated, in part, by a Job Development Investment Grant (JDIG) approved by the state’s Economic Investment Committee.

Has too much been made of the HB2 controversy in North Carolina? Or not enough? It depends on who is asked. But like it or not, area competitiveness is at stake when such matters are legislated.

“We do a lot of work with Bay Area companies, and we had at least two clients last year that I can think of, and I bet there are more, that ruled out North Carolina because of that law,” says Matt Ryder, managing principal at Cresa Consulting Group in Atlanta. “Both said they would not explain to their employees why they chose to go to North Carolina. That is certainly something that is influencing North Carolina’s competitiveness. Another is the evolution of JDIG and whether North Carolina will be as competitive in projects where incentives matter.” JDIG resources have been increasingly difficult to come by in North Carolina’s urban centers, says Ryder, as more attention is focused of late on developing rural areas. His perception of a new push in rural economic development in the state is on the mark.

In April, Secretary Copeland appointed Napoleon Wallace, a finance and community development executive, as the department’s Assistant Secretary for Rural Economic Development. He will spearhead the department’s support for North Carolina’s rural communities, leading a team of specialists that help communities make the necessary preparations and infrastructure investments to attract business and economic growth.

“We have been successful in many rural areas, bringing in some of the advanced manufacturing and non-woven textiles,” says Copeland. “In particular, we have an Israeli sector of nonwovens — about 17 of them now — and every one of them is in a rural county, and they are expanding. One of them that came over about 10 years ago with a minimal investment did a $180-million investment two years ago. It’s in a rural county. We are having success there.

“We are also involved with many large manufacturing plants looking at rural areas,” the secretary adds. “We just got the CSX intermodal facility in Rocky Mount. That’s an intermodal transfer facility, and we’re having a lot in interest now in distribution and warehousing. The governor’s budget includes money for site [preparation], especially in rural counties. It’s only real estate until the infrastructure is there. We have a keen interest in assisting those counties, getting sites in place. Some counties have challenges, like being 40 miles from a natural gas line. So we’re going to focus on getting those counties ready for manufacturing and development. That is a big priority of ours.”

Copeland says his team will work in rural communities and metropolitan areas to innovate in workforce development. “We’re big advocates of expanding apprenticeship programs, working through community colleges and companies,” he relates. “Bosch and GE are among the companies that have apprenticeship programs, and we want to expand those. We are seeking continued funding of customized training through our community colleges for companies — that’s in rural and urban areas. It’s really important in areas that don’t have the other attractions the urban areas have.

“Our strategy right now is to continue to have robust partnerships — a wraparound strategy. When we’re working with companies, we all need to wrap our arms around that — the state, the legislature, the local county and local municipality. The legislature is prepared and ready, and we’re building alliances to move forward lock step with large projects. Several of those are teed up. It’s not just Commerce — it takes us all working together to make this happen.” 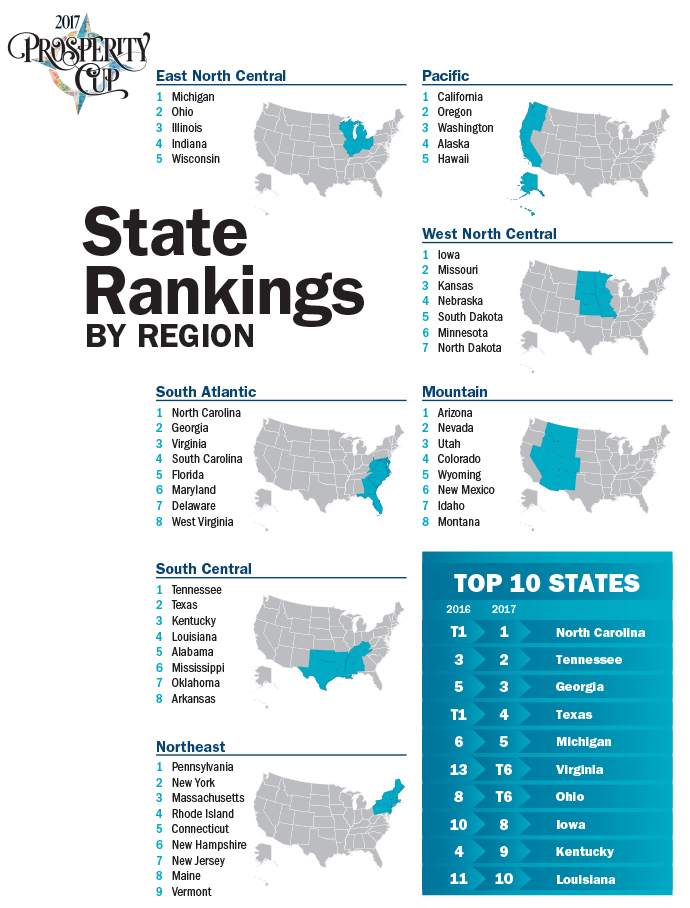