A SITE SELECTION INVESTMENT PROFILE
THE STATE OF THURINGIA, GERMANY

Thuringia is a European automotive power center in more ways than one. 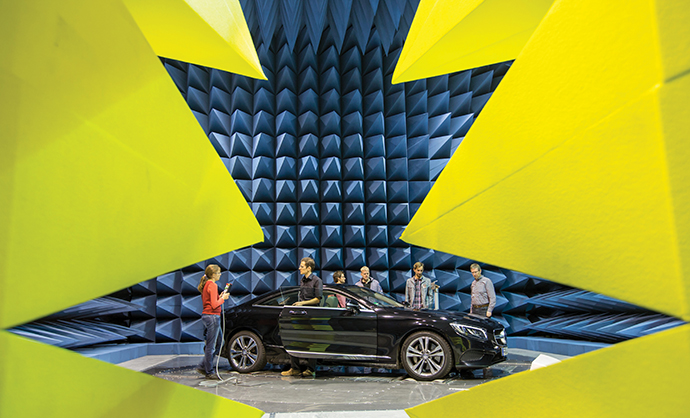 The Thuringian Innovation Center for Mobility (ThiMO at www.mobilitaet-thueringen.de) at Ilmenau University of Technology has pursued hundreds of projects with the automotive industry as companies and territories alike navigate their way to the future.
Photo courtesy of ThiMO
by ADAM BRUNS 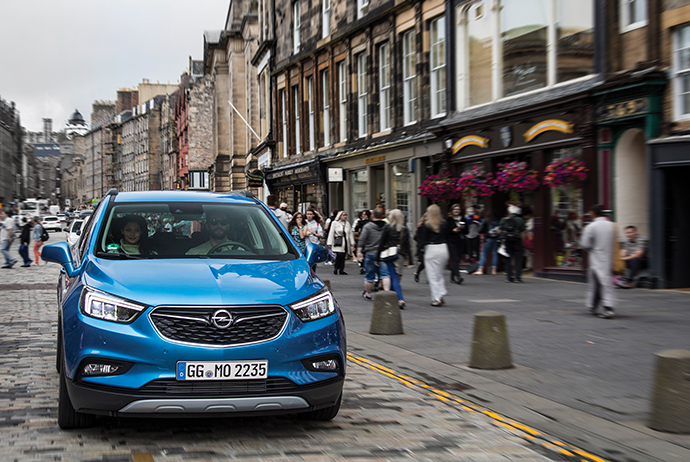 GM and PSA Group confirmed in April 2017 that as part of the pending sale of Opel to PSA, the successor to this Opel Mokka X will be made at the Opel plant in Eisenach beginning in 2019. The plant currently employs more than 1,400 people.
Photo courtesy of Opel

On the A4 autobahn from Eisenach to Erfurt in the German State of Thuringia, there’s a spot where you drive among three centuries-old hilltop castles. At sunset they look like ancient history, but at sunrise they seem ready to herald a new day.

The same could be said for Thuringia’s automotive industry itself, which after a century is poised to be a harbinger of positive momentum for a sector undergoing a global transformation.

Look down from another mountaintop edifice — Wartburg Castle where Martin Luther hid out 500 years ago to translate the Bible — and you can just make out the former manufacturing plant in Eisenach that BMW used to manufacture its first car, the Dixi, in the late 1920s. Today around 580 automotive manufacturers and suppliers continue to drive the Thuringian and German economy.

“Automotive is our No. 1,” says Dr. Arnulf Wulff, senior vice president of Investment, International Business and Cluster Promotion of the State Development Corporation of Thuringia (LEG), noting the plethora of foreign firms, as well as growing interest from Chinese automotive companies.

Thuringian automotive firms employ 62,000 people and generated over €8.9 billion in revenue in 2015. Authoritative statistics like that carry some weight. Voices of authority carry even more.

Dr. Michael Militzer, 69, founded MITEC after Germany reunification. The company is headquartered and operates three plants in Eisenach, among other global locations in the US and China. The chair of Automotive Thüringen — a consortium of 89 automotive suppliers — Militzer is a man who speaks his mind.

“I’ve been busy for 41 years, building companies since 1975,” he says, noting how he was fortunate to perceive and catch hold of the market demand as East Germany’s economy surged after reunification. Since then there’s been a contraction, but Thuringia’s companies have endured. “We always have the same question,” says Militzer. “How to survive in this economy, with all these shocks around? You need luck and a good work force. People are more important than lower rates.”

When it’s noted that Thuringians seem to have tool and die, fabrication and manufacturing in their DNA, he says, “It is in the blood … but you need it in your brain.” By that he means that all parties are in the process of adapting to a future where a car has 250 pieces instead of the 4,000 in a traditional-powertrain vehicle.

“Imagine you’re an engineer with 20 years of specialized knowledge about making engines, and now you have to change to a laptop on wheels,” he says. “You need a body, but it will change from steel to aluminum to [composites] to plastics, and you need specific people who can handle it. You have to understand how your original business can step forward to the new one.” 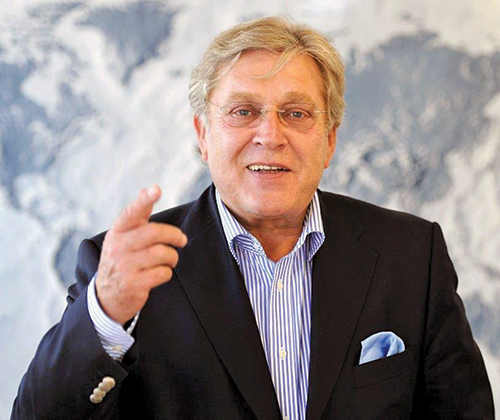 Automotive Thüringen itself is helping in that endeavor. The Virtual Automobile portal at www.virtuelles-automobil-thueringen.de represents the know-how of more than 500 companies in the Thuringian automotive industry, and allows anyone to find potential partners for production and R&D.

Prof. Dr. Matthias Hein is head of the RF & Microwave Research Laboratory and director of the Thuringian Innovation Center for Mobility (ThIMO) at the Ilmenau University of Technology. His center’s work meshes precisely with the challenges Militzer describes.

“ ‘Smartphones on wheels’ was coined as a phrase,” says Hein, “but I would say a computer server on wheels.”

The road to autonomous driving is lined with layers of sensors, control units and signal processing, he says. “The technical complexity of cars increases dramatically,” to the point where it’s neither possible nor desirable to test individual systems separately. That’s where ThiMO’s high-complexity test beds come into play, focused on drivetrain and braking systems; combustion engines and hot-gas systems such as turbochargers; and the wireless environment of cars.

“We combine research excellence with industrial needs,” Hein says. “In the last five years, there were more than 200 projects between ThiMO and different companies. There are contacts throughout the world. It could be a small project, such as when a company says, ‘We have a problem with the brakes, could you help us?’ Within a month, you have the results you want.”

Other projects complement this work. In March 2017, the opening ceremony of the new Mittelstand 4.0 competence center Ilmenau took place. The center supports companies in the digitization of work processes, their production and their products.

At MITEC’s 800-employee plant in Eisenach, Arnie Jensen, the new CEO and chairman of the board of management who’s led sites in China and other locations, says new thinking is indeed important, but you first need to understand and leverage core competencies.

“Even though we might need new ideas, it’s important to not lose the strength of Thuringia’s technical skills,” he says. ‘The ability of our people to understand materials and processes is very strong, stronger than most other regions I’ve been in. There’s an openness to want to improve and grow.”

Coming Through In the Clutch

In Thuringia’s largest industrial area of Erfurter Kreuz near Arnstadt, you’ll find BorgWarner Transmission Systems. Its forerunner in Germany was Stieber Rollkupplung GmbH, which started making clutches 80 years ago. The site in Arnstadt opened in 2003 with support from LEG Thuringia, just after the company debuted a new dual clutch product developed in concert with VW, which operates a 16,000-employee plant in Kassel.

“It’s easy to reach, close to the autobahn and close to our main suppliers,” said Martin Winter, plant manager/managing director, BorgWarner Transmission Systems, when I talked to him exactly one day after the company had manufactured its 6-millionth dual clutch. “And there was availability of workforce — the GDR [former East Germany] education standard was very high for people in metalworking.” And the company has continued to find good people, he says.

Winter calls the network among industrial and civic leaders “outstanding. This close relationship between politics and industry is something I’ve never encountered elsewhere in my life.” He also has had occasion to compare other territories, including Poland, an aggressive competitor to Germany with less expensive labor.

“Our main argument here is we have a long track record of success, highly motivated labor, and we are a quality site with quick response to customer demand,” says Winter.

Winter and his colleague Georg Bode, plant controller, describe the neighborhood feel of the area they occupy, borrowing an employee safety campaign concept or a large forklift from fellow companies just like a neighbor would borrow a cup of sugar. The sense of partnership extends to institutions supporting training and certification programs too, as well as providing a qualified workforce to begin with.

“We are very happy to have Ilmenau University of Technology around the corner,” says Winter, noting the company also finds logistics talent from the University of Applied Sciences in Erfurt. “They seek out industry — they don’t stay in their ivory tower. The cooperation is brilliant.”

Michael Eckl, head of BMW Group’s Eisenach site, a lifelong BMW employee, recognizes the power of small, nimble German firms to adapt and change when necessary. For BMW, says Eckl, there is “an engineering and toolmaking competence” in Thuringia for the most refined steps of making a super-refined automobile. “If you’re talking about the last 5 percent or 10 percent of complexity, and intelligence in production, you get some answers here,” he says.

BMW employs close to 300 at its tool shop in Eisenach, where the company has invested almost €60 million over the past four years.

“We sell our cars by design and by emotion,” Eckl says of the BMW approach. “You need really customer-oriented design, working with convex surfaces. You need toolmakers who can realize such a design. When you look around the world market, you cannot find a huge amount of toolmakers who can make dies for these. The tool shop here enables us to create this specific design for BMW. The big advantage, if you look around Eisenach, is that you have a lot of small villages, and people who are really practical. This is our source for toolmakers.”

In the past, it took some time to get to international airports from Eisenach, says Eckl. But that’s about to change.

“A big advantage will come at the end of this year when the high-speed train goes from Munich,” says Eckl, meaning a productive, two-hour train ride. Another new high-speed train route will make the trip between Erfurt and Berlin just one hour and 40 minutes.

In the meantime, Eckl says the autobahns do their part, enabling leaders like him to run their businesses. He knows how to find high speeds: He drives an X4.

“It’s only 450 kilometers between Eisenach and Munich,” he says. “I drive it at maximum. I usually start at four in the morning. And with the right music, like ZZ Top or AC/DC …”

Performance vehicles, after all, are meant to perform.

The resources and people of Thuringia likewise are poised to help the companies that make those vehicles perform at their optimum.

LEG’s Arnulf Wulff counts the Daimler complex in Kölleda among his home state’s biggest successes. It’s grown from 400 jobs in 2003 to more than 2,000 today, and produces about 70 percent of all engines that go into Mercedes cars.

The project turned to Kölleda in part because “a new autobahn was under construction, and it was near a railway and had a good commuter radius for workers,” Wulff says. Moreover, LEG, because of its broad range of services, was able to step in to help develop the original core parcel. Today it is a thriving industrial park, “and now we are doubling the area,” Wulff says. “We are not only the supporter in the process of decision-making and during construction. We are their partners forever if they like.”

In a territory where centuries of knowledge and history are so powerfully present, those words carry considerable weight.

This Investment Profile was prepared under the auspices of LEG Thuringen – the State Development Corporation of Thuringia. For more information, call +49 361 5603-450, email invest@leg-thueringen.de or visit www.invest-in-thuringia.de. 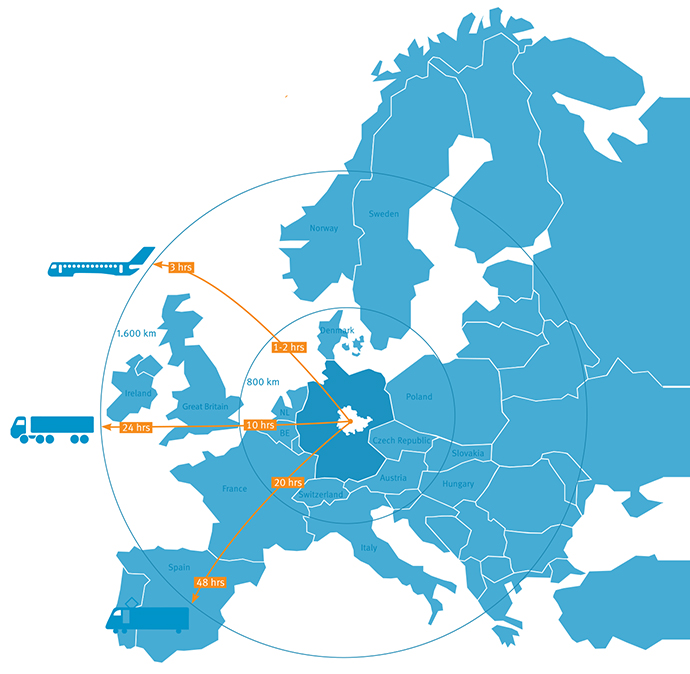 Big Wheel Keeps on Turning: Thuringia is at the epicenter of the European automotive scene, both in terms of making vehicles and selling them.