The business case for combating emissions in Utah 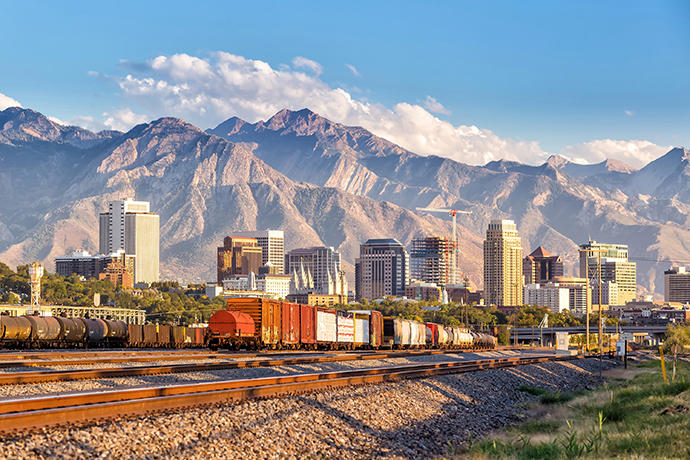 Utah businesses and chambers of commerce are stepping up to the economic challenge of cleaning the air above the state’s metropolitan areas, including Salt Lake City.
Photo: Getty Images
by GARY DAUGHTERS

When Geneva Rock, a major Utah construction company based in South Salt Lake, unveiled an $8-million fleet of environmentally friendly compressed natural gas concrete trucks in January, Utah environmentalists weren’t the only ones applauding. Air quality is a looming business issue in Utah, and improving it has become a statewide priority.

As in many states, elected officials in Utah labor to strike a balance between environmental regulation and economic activity. But in the Beehive State, a hub of both economic growth and pristine beauty, it’s increasingly becoming a balance of shared interests.

By most observable metrics, Utah’s business climate is the envy of the Mountain West. Over the past 10 years, Utah’s gross domestic product has soared from $106.3 billion to $152.5 billion, a healthy jump of 43 percent.

In its recently released 2017 Report to the Governor, the University of Utah’s Kem C. Gardner Policy Institute — considered the state’s pre-eminent source for economic data — reported that every major industrial sector in Utah expanded in 2016, contributing a total of 49,500 new jobs, up 3.7 percent from 2015.

“The consensus forecast,” states the report to the governor, “predicts moderating — but still healthy — job and wage growth, low unemployment and increased net in-migration in 2017.”

That optimistic outlook includes a caveat, though. The report states that urban Utah’s air quality, which suffers during the peak summer and winter months, represents an “internal risk to the Utah economy.” The American Lung Association, in its 2016 State of the Air Report, ranked Salt Lake City and nearby Provo and Orem as sixth-worst in the nation for air quality, worse than Los Angeles. Utah Physicians for a Healthy Environment believes between 1,000 and 2,000 people die every year in Utah due to the impacts of air pollution.

“If you’re relocating people from one part of the country to another,” said Jeff Edwards, the recently retired former director of the Economic Development Corporation of Utah, in 2015 testimony before the state legislature’s Economic Development and Workforce Services Interim Committee, “those folks have to make a decision just like anybody in this room would if they were going to move. If air quality is an issue, or a perceived issue, that’s going to impact the ability we have to attract people.”

Utah’s air, according to the Utah Foundation, a public policy research group, is becoming an ever-more pressing concern among the state’s residents. In a survey released in October, the group found that air quality ranked as Utahns’ number-two concern, up from seventh in 2012 and second only to healthcare.

Geneva Rock’s new fleet of 25 compressed natural gas concrete trucks emits 90 percent less carbon monoxide than diesel counterparts and 50 percent less fine particulate matter, the demon of air pollutants. The company says the net reduction in emissions will equal the removal of 8,100 cars a year from Utah’s roads. The new trucks represent one of the largest air quality investments made by any construction company in Utah.

“We all share ownership and responsibility for Utah’s air quality,” said Ted Wilson, executive director of the Utah Clean Air Partnership (UCAIR). “We applaud Geneva Rock for leading its industry by making this significant investment “

The case of Duncan Aviation, a Nebraska-based aircraft refurbishment company, is an instructive example of the balance being struck in Utah between business investment and the environment. Duncan last year embarked on a $50-million capital expansion of its facility at Provo Municipal Airport that promises to create 700 jobs. The long-planned investment was first put on hold by the Great Recession, during which local authorities tightened air quality regulations, meaning the planned facility wouldn’t meet the new standards without $3 million worth of upgrades. That put the project in jeopardy.

To rescue the deal, officials of the Economic Development Corporation of Utah and the Governor’s Office of Economic Development supported passage of legislation that allowed Duncan to use money from the state’s Industrial Assistance Fund to install new air quality technology. Duncan’s project, thus green-lighted, represented the second-biggest corporate deal in Utah of 2016, trailing only the UPS investment in a new distribution facility in Salt Lake City.

The Chamber of Commerce Goes Green

In January, the Chamber launched an Inversion Mitigation Initiative aimed at blunting the effects of the city’s annual winter temperature inversion, during which warm air acts much like a lid, trapping pollutants in the cold air near the floor of the Wasatch Valley. Undertaken in consort with UCAIR and the travel website TravelWise, the program enlists business leaders to encourage employees to limit single-occupancy vehicle trips.

The Chamber’s Clear the Air Challenge, conceived in 2009, is a month-long competition that urges Utah residents to drive less and drive smarter during the month of July, when the summer air is hot and still and vehicle emissions in the valley accumulate.

The Chamber says that since its inception, the program has saved more than 13 million miles driven, eliminated nearly 1 million trips and reduced emissions by more than 4,700 tons. Fidelity Investments was named winner of the challenge in 2016.