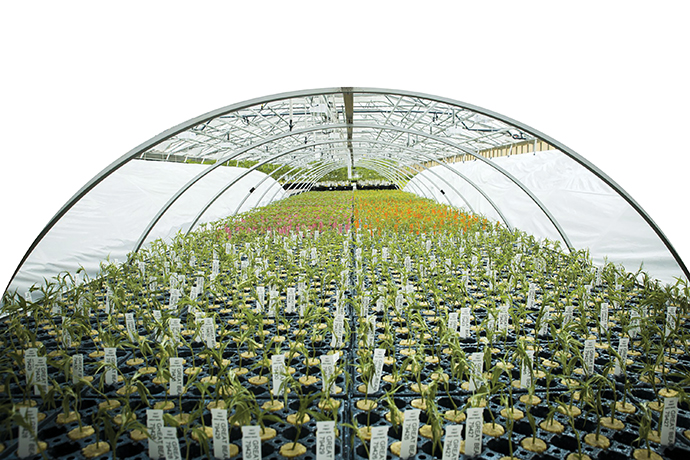 Leamington, Ontario-based Aphria, Inc., is the leading greenhouse producer of cannabis for medical use. Its market will expand significantly when cannabis is approved for recreational use in Canada in 2018.
Photo courtesy of Aphria Inc.
by MARK AREND 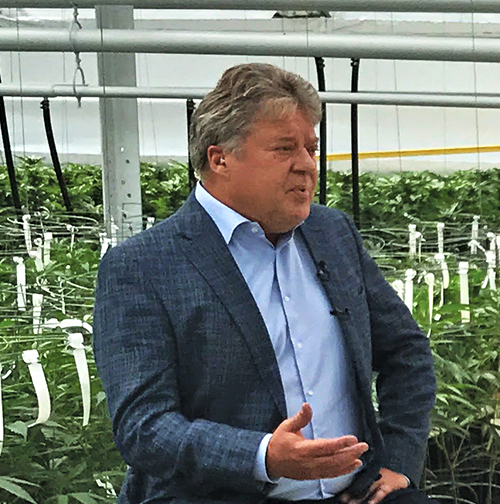 Sunshine is necessary for any agricultural enterprise — even more so for those using greenhouses to cultivate their crop. Just ask Vic Neufeld, CEO of Aphria, Inc., one of 43 licensed producers of cannabis under Canada’s Access to Cannabis for Medical Purposes Regulations measure, and the largest such grower in the Windsor-Essex region. He says the Windsor area has the best sunshine for greenhouse operations in Canada.

“We were the 13th company to get into the race, but all the others were indoor growers,” says Neufeld. “We were bucking the trend at the time, growing in a greenhouse, but we’re being emulated now. We did that for two reasons — low-cost production and we could grow to scale and grow to mass.” Neufeld’s business partners, Cole Cacciavillani and John Cervini, had over 75 years of combined experience growing potted plants, flowers and produce in greenhouses. “We started with a half-acre greenhouse and then expanded another half-acre, so today we’re sitting on about 45,000 square feet. We just completed Part II of our expansion, so we now have 100,000 square feet of greenhouse.”

In September 2016, Aphria’s Board approved a $24.5-million capital project as the first phase of its Part III expansion. The project will increase Aphria’s capacity from 100,000 sq. ft. to 300,000 sq. ft. and is expected to increase Aphria’s growing capabilities from 8,000 kgs annually to 22,000 kgs of annualized harvest. “That’s between what we sell dried and as oil extraction, all of which is for medical distribution channels.”

Legislation was introduced in Ottawa in April to legalize recreational use, which would expand Aphria’s market significantly, and prompted initiation of plans for a Part IV expansion. “That would add 700,000 square feet, bringing us to 1 million square feet of just greenhouse.” says Neufeld. That expansion will service the recreational distribution model, which everyone wants to commercialize by July 2018. “We need to build capacity and to make sure we have harvest available to the supply chain.”

“Hiram Walker consumes 70 square miles of grain on an annual basis. Being close to that agricultural support is critical. The other is water, and we have the Great Lakes right at our doorstep.”

In this case, proximity to the U.S. border is not a factor in the company’s success as it won’t be in the exporting business in the near future. It’s the location’s suitability for Aphria’s business model, and the greenhouse model specifically, for which Neufeld says the Windsor-Essex area is ideal. “Everyone right now, for the most part, grows indoors, so their cost structures are much higher than ours. We are about $2 a gram all in when we make a sale under medical. Most other licensed producers are at $3.50 or more per gram. The difference is greenhouse. We use less electricity than indoor operations with more lights and air conditioning. We use Mother Nature — the winds and venting. This drives out costs in a very meaningful way. We’ll be not just a survivor in this market, but a big winner when the recreational market comes into play.”

Mother Nature helps out in another important way, notes Neufeld. “We have more sunlight hours in Essex County than in any other part of Canada — the intensity of the sun, the angle of the rays. There are so many favorable conditions for greenhouse growing in the immediate area. And we have a lot of infrastructure in this area we draw from — fertilizer and biological controls sourced right in Leamington, where they’ve been used for years.”

What is the Windsor-Essex area’s most essential advantage to Aphria? “Powered by the sun is the bottom line,” says Neufeld. “It differentiates cannabis growing in an indoor box, which culturally and historically has been the only way people understood it could be done, from our model — one of the only pure, greenhouse-grown operations. We’re powered by the sun.”

What did the 19th Century founder of Canada’s leading distillery know about Windsor-Essex, Ontario, as an agri-business production location that holds true today? Lots. More than 150 years ago, Mr. Hiram Walker crossed the Detroit River from Michigan to Windsor and established not just a whiskey distillery, but an entire production ecosystem. Walkerville, as it soon became known and has been known for generations, was anchored by a distillery but included nearby agricultural assets — farms raising grain for the whiskey, mainly — housing for employees and logistics assets afforded by the river and its proximity to the Great Lakes. Walker’s ferry between Detroit and his Windsor operation was the first scheduled cross-river transportation service.

Today, Hiram Walker and Sons Ltd., now a subsidiary of Pernod Ricard, employs about 300 at the same location in Windsor-Essex, making its Canadian Club whiskey under contract for Beam Suntory, its private label Wiser’s whiskey, Polar Ice vodka and other beverages. 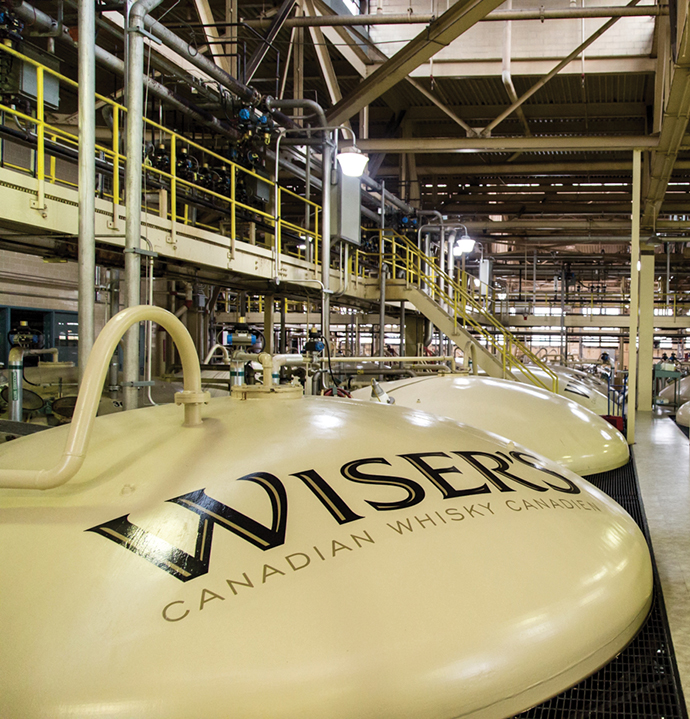 “The reasons for being here in Windsor haven’t changed all that much,” says Jim Stanski, vice president of operations. “One is the agricultural land. In Southern Ontario, we’re known as Canada’s breadbasket. We have a near-Carolinean climate tempered by the Great Lakes. It’s flat, smooth ground — a great agricultural area. Hiram Walker consumes 70 square miles of grain on an annual basis. Being close to that agricultural support is critical for us. The other thing a distillery needs is water, and we have the Great Lakes right at our doorstep. Back in the 1850s, the location was probably more important from a transportation point of view. Today, the biggest international border in the world is right here between Canada and the U.S. with the Detroit River’s Ambassador Bridge and tunnel crossing.”

Cross the Ambassador, and you’re on Interstate 75, stretching from another Canadian border in Michigan’s Upper Peninsula all the way to south Florida. Interstates 94 and 96 in Michigan and Ontario’s 401 freeway to Toronto and Montreal are additional highway assets Windsor businesses enjoy. The city is well served by air and rail, as well. “Transportation is still a key benefit,” says Stanski. “We’re within five hours of major metropolitan centers — Cincinnati, Cleveland, Toronto, Buffalo, Detroit and Columbus. We’re in probably one of the most densely populated regions of the area. Those factors remain radically important.”

Access to the sports, international airport and other amenities of Detroit is another benefit, Stanski points out. “I can’t think of a better city to be in than Windsor. It has that small city atmosphere, it’s right across from Detroit. The Pistons are moving back into the city center, there’s a new arena coming for the Red Wings, and the Lions are downtown. So we are right near all the big Detroit attractions without being right in the city. We’re surrounded on three sides by water. It’s a beautiful area.”


Agri-Business & Food Processing With the Closest Access to U.S. Markets

Agri-business in the Windsor-Essex region is a $3-billion industry with almost 8,000 employees spread across more than 100 food and beverage processing companies and over 1,500 growers. The region is home to major national and world-wide brands. Why are they in Windsor-Essex?