Successful investment by foreign firms even has domestic US firms looking inward. 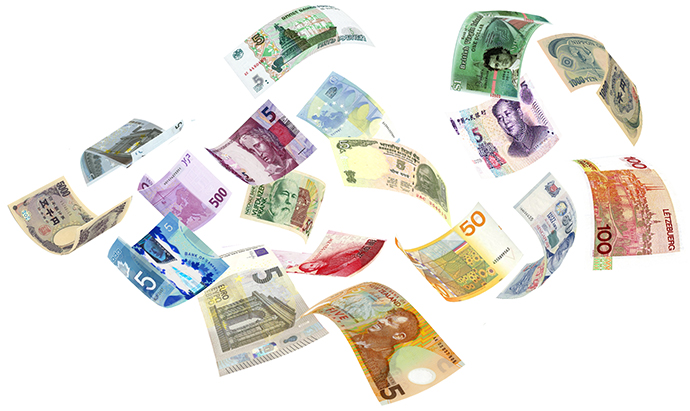 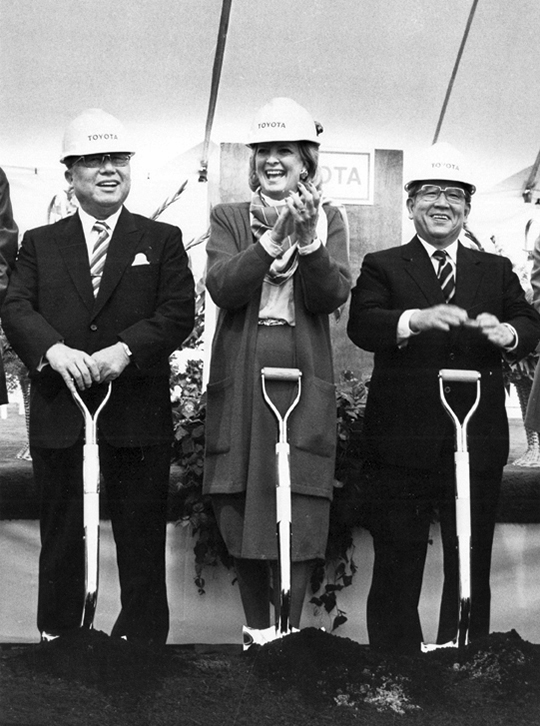 The US has gone through a period of sustained high levels of inward investment — both foreign and domestic inter-state investment. The combined foreign and inter-state investment levels reached record highs in 2016, with more than 350,000 new jobs created across the country from inward investment, notwithstanding a moderate decline in foreign investment. The high levels of inward (including inter-state) investment are underpinned by a strengthening US economy that has posted solid growth in recent years, generating optimism and a willingness to invest among both US and foreign companies.

The growing US economy has encouraged an increase in market-seeking investment, with substantial increases in the wholesale, retail and tourism sectors. This is further evident when looking at the activities that have grown most significantly, with sales and services operations, distribution activities and hotels accounting for a substantial share of the overall increase in inward investment.

By contrast, investment in more contestable activities, where companies have greater geographic scope for choosing alternative locations (such as manufacturing and R&D), declined moderately or remained stable in 2016. This highlights the importance companies attach to the US as a market, but also raises questions about how the US can position itself more strongly in global value chains and attract more internationally contestable investment. 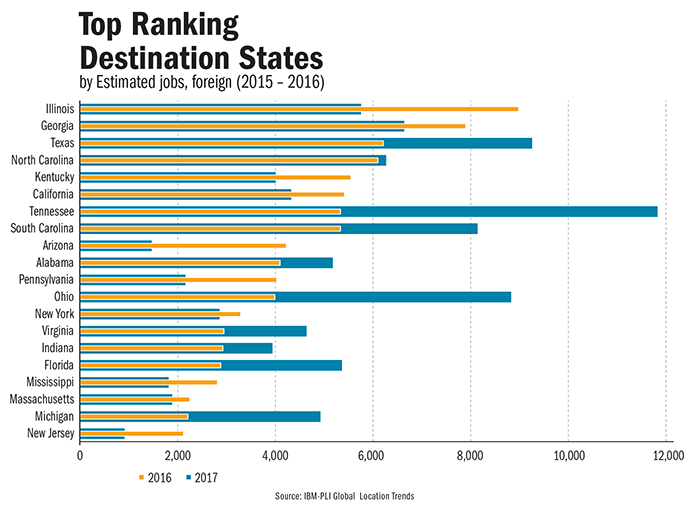 Investment in the US from these key source countries is more focused on higher-value manufacturing activities in sectors such as transport equipment and chemicals, rather than the more market-serving sales and distribution activities which account for a large share of the domestic inter-state investment. Indeed, foreign investment projects in the US are on average of higher value than domestic projects, as measured by the knowledge intensity and salary levels of the jobs created.

The relative performance of individual states varies greatly. Inward investment in recent years has primarily benefited a number of Southern states, with Texas being the top destination state for overall inward investment (foreign and domestic). Investment to the state has been focused around Dallas and Houston, with both cities now firmly positioned among the top metropolitan areas in the US for inward investment.

Illinois ranks No. 1 when looking solely at foreign investment. The state experienced significantly higher foreign investment in financial services, transport equipment and life sciences. The success of Illinois is also evident in the position of Chicago, which has been the top destination metropolitan area in the US measured by the number of investment projects received for the last five years in a row. Chicago has become a hub for distribution and logistics-related activities as well as business services and ICT. In addition, the wider metro area is attractive for manufacturing activities in sectors such as chemicals, food and beverage, and industrial machinery and equipment. Chicago’s consistent ranking as the top city in North America for the number of significant investment projects — and a leading US city for job creation from FDI — signifies that Chicago is a key global economic destination. 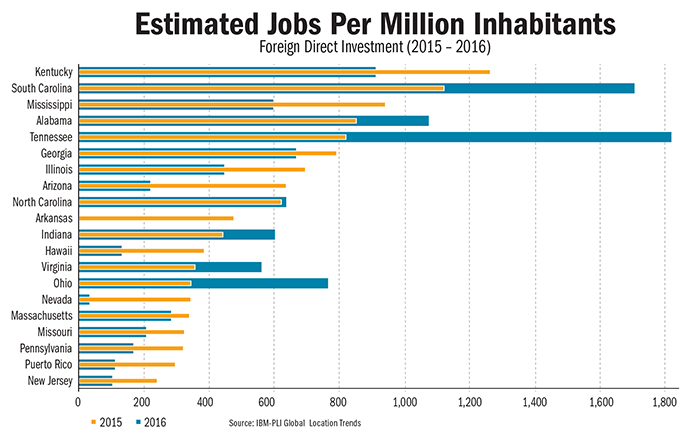 It is of interest to note that some states are very successful at attracting inward investment from other US states (domestic investment) but receive relatively little foreign investment. For example, Florida experienced substantial growth in overall inward investment, but saw a declining and relatively modest level of foreign investment. Instead, the strong inward investment performance is largely driven by US companies in the tourism, financial and business services sectors. This may suggest that the proposition of Florida in these segments is insufficiently leveraged for foreign investment, with a lack of awareness among foreign companies about the opportunities offered by the state. The same applies to other states that display a similar pattern, e.g. Ohio and Virginia.

Largest FDI Impact in South, But Detroit High in Value

Measured relative to population, the strong performance of the Southern states becomes more prominent, with Kentucky ranking No. 1 in foreign investment per capita, followed by South Carolina, Mississippi, Alabama and Tennessee. For overall inward investment (domestic + foreign), Nevada ranks No. 1 per capita in 2016 after the announcement of substantial investments by Amazon and Credit One Bank. Tennessee is second, followed by South Carolina, Georgia and Kentucky.

These states have all seen substantial manufacturing investment in recent years, as companies have sought to locate their production activities closer to the growing US market, notably in the transport equipment sector. In addition, they are becoming increasingly attractive as investment destinations for companies in the ICT, financial and business services sectors, offering a combination of good talent pools and attractive operating costs.

For most locations it is not just the number of jobs created that is of interest, but also the type of investment projects and their value to the economy. Comparing cities and states on which projects are attracted, and not just the number of jobs, is therefore an increasingly important metric for gauging inward investment performance. To this end, IBM-Plant Location International has developed an FDI Value Indicator that assigns a value to each investment project, depending on sector and type of business activity. This value indicator assesses the added value and knowledge intensity of the jobs created by the investment project.

On this measure, Detroit is the top performing metropolitan area in the US over the last five years, followed by Boston and Austin. Inward investment to Detroit is heavily concentrated in transport equipment (mainly automotive), with a significant proportion of high-value manufacturing, R&D and headquarters activities. In addition, the city is attracting projects in the ICT and business services sectors, as well as other manufacturing segments such as chemicals and electronics. Boston has a compelling competitive position for high-value activities in life sciences, ICT and business services, while Austin has positioned itself very strongly for inward investment in the ICT sector.

It is evident from the above that the US remains a strong beneficiary of globalization and FDI. In addition, many states benefit from substantial domestic inter-state investment. In order to further strengthen the position of the country and individual states in global value chains, it is important that each individual state carefully ascertains its value proposition in different sectors and segments based on a fact-based analysis of competitive strengths and weaknesses. Based on such insight, a targeted inward investment strategy can be developed and executed, focusing on key areas of strength and opportunity.

According to the Organization for International Investment, 6.8 million US workers — including 20 percent of all manufacturing workers — earn their living from an international company operating in the United States, earning average compensation of nearly $80,000, 24 percent more than the economy-wide average.

Indeed, it could be argued that the existing value propositions of several US states are not sufficiently leveraged internationally, with some states relying to a large extent on investment from other US states. While inter-state US investment will always be a major source of inward investment opportunities, it is important that international opportunities are also pursued with a view to position US states and cities as global hubs in value chains of the future.

Moreover, as the global economy is being transformed by digital technologies in the coming years, it is crucial that US states understand the implications of such digital disruption to their future opportunities for inward investment. In this context, aligning skills provision with the requirements of a rapidly changing labor market will be a critical consideration. This will involve not just more education, but potentially a transformation in the type of skills that are developed and how this transformation is provided.

Rather than merely thinking in terms of education systems and institutions, government and public sector leaders need to embrace the idea of a learning ecosystem encompassing public, private and non-government actors. For a high-value and knowledge-intensive economy like the US, successfully orchestrating learning ecosystems will be a critical economic development challenge in the era of digital disruption.

According to the Washington, D.C.-based Organization for International Investment (OFII), the latest data show that FDI in the United States totaled $74.7 billion in the second quarter of 2017, a 9 percent decrease from Q1. “While quarterly flows are subject to large revisions and can fluctuate greatly from quarter to quarter,” said an OFII release, “it seems that global investment in the United States for 2017 is on pace to come in lower than it did in the prior two years (which were both record-breaking).

Those waning numbers line up with findings from OFII’s recent survey of 60 CFOs of US subsidiaries of foreign companies, released in June, which showed deteriorating confidence in the US business climate. According to the survey: