The era of e-mobility and autonomous driving is lining up as a tug-of-war between the technology-driven invisible hand and the ultimate force of state incentives. 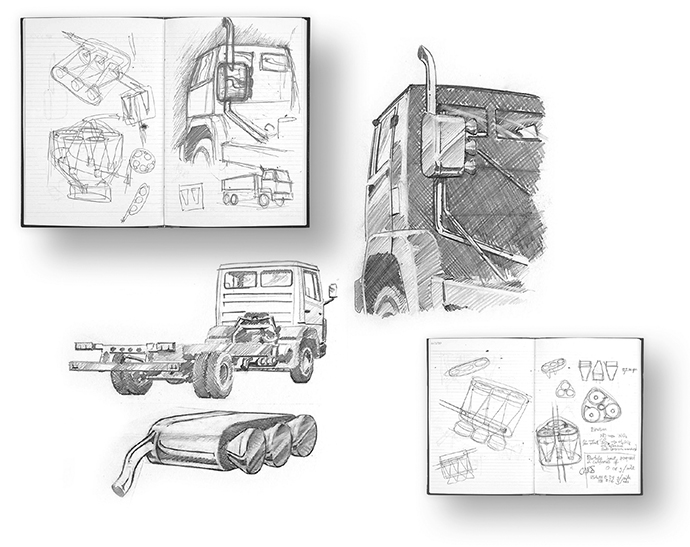 After watching anti-pollution solutions (sketches above) that his team had developed in the early ‘90s die on the vine, Sir James Dyson (below) in September confirmed his company is developing a battery-powered vehicle concept scheduled to be launched in 2020.
Photo of James Dyson by Heathcliff O’Malley; all images courtesy of Dyson
by ANNIKA JOSTMEIER 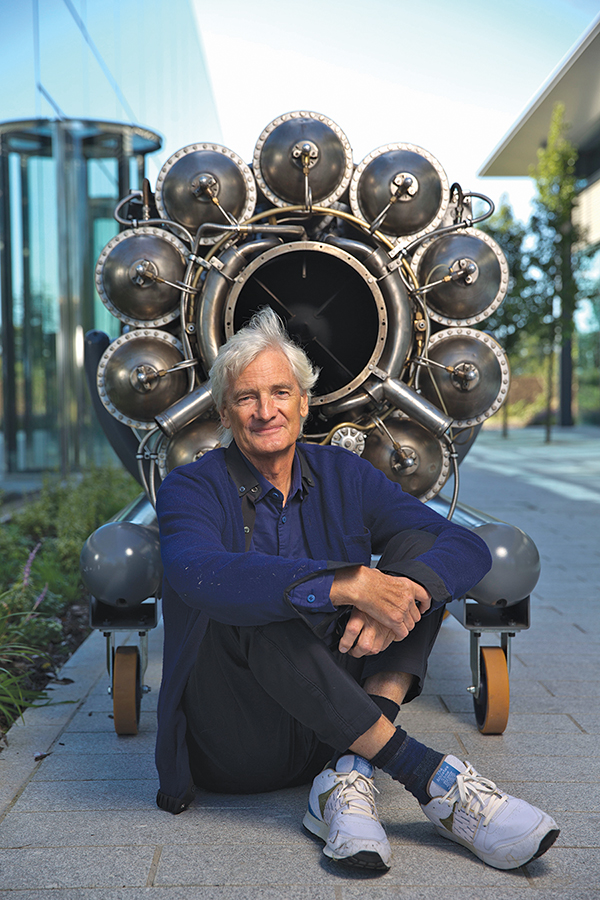 The global automotive industry is on the verge of tremendous change, driven by new technologies such as autonomous driving, and by a strengthening political push to limit emissions. These changes are not related to one geography, but will rather have an impact on much of modern society in industrialized countries.

Christoph Stuermer, global lead analyst at PwC, said in an interview in July at the Automotive Logistics Europe conference in Bonn, Germany, that “... it is almost as if the automotive sector were facing the ‘perfect storm.’ The automotive industry is in a state of [collective] panic. Something is happening out there, and we are seeing a whole industry fearing immediate extinction.”

In recent years, automakers were adding only a conservative number of alternative vehicles to their product range, and were instead focused on prolonging the life-cycle of traditional fossil-fueled vehicles. This strategy did not seem unrealistic given that there were projections of all-electric vehicles reaching less than 2 percent of global sales by 2020, notwithstanding government aspirations underpinned by incentives to urge buyers and automakers to adjust their perception.

But here is what’s changed: China, the world’s largest car market, announced this year that the People’s Republic is developing a timetable to stop production and sales of traditional energy vehicles. That’s a prospect global carmakers cannot afford to ignore. Leaving aside the fact that China is still the most important market for the industry, China’s move is rooted in something more fundamental. Technology is rapidly resetting the outlook on what vehicles can provide, how consumers can use them, and the costs for which an electric vehicle (EV) will be manufactured.

At the moment, EVs account for less than 1 percent of US and global sales, and even industry forerunner Tesla is struggling to ramp up assembly to meet deliverables for its Model 3, which is targeting a mass market with a base price around $35,000. The EV revolution is a challenging and cost-intensive business. Nonetheless, the Chinese government instructed its automotive industry to sell at least 2 million EVs per year by 2020, and other governments in Europe and Asia have announced ambitious medium- to long-term sales targets and quotas for zero-emission vehicles. EVs are considered the main solution, at least for the next 20 years.

Given the example of Tesla, the question remains how to achieve this goal. According to Genevieve Cullen of the Electric Drive Transportation Association in Washington D.C., an association promoting electric, hybrid, and fuel-cell vehicles, “Technology is getting cheaper,” which refers in particular to the falling costs of lithium-ion batteries — driven by growing manufacturing capacities and international competition. According to Bloomberg New Energy Finance, by 2025 or even sooner, it is possible that electric drivetrains will have no cost disadvantage compared with traditional drivetrains. Even though governments around the world are pushing for a pivot toward EVs, the real tipping point remains affordability for consumers.

Even though governments around the world are pushing for a pivot toward EVs, the real tipping point remains affordability for consumers.

That the perception of automakers has changed can be seen in General Motors’ press conference last October in Detroit, where the company pledged to launch at least 20 new electric vehicles in the next six years. Carlos Lahoz, director of sales and business planning and supply chain management at Kia Motors Europe, said in this regard: “In the connected age, the car as we know it today will be history.”

Beyond GM, other automakers and suppliers have begun to reinvent their organizations to align with the new EV requirements and, moreover, with the landscape of advanced technological reality. Those companies which do not manage to transform their organizations will risk losing considerable market share in a time where rapid technology developments will inevitably increase competition among existing and emerging players.

Next to companies pouring billions into developing and manufacturing autonomous and electric vehicles — as well as vehicle components and drivetrains — an emerging trend can be recognized especially among components manufacturers: spin-off of business divisions, mergers with strategic partners, or acquisition of new technology assets.

Delphi, for instance, has sold off most of its powertrain division, focusing more on sensors and connected car technology. Johnson Controls, meanwhile, spun off its seating and interior business, while merging with security solutions and fire protection technology provider Tyco. Johnson Controls is now built on two pillars, one focusing on building technology and connected facility solutions, the other on power solutions, including supplying batteries to the automotive industry. No doubt, there will be plenty more M&A activity along the way.

Nonetheless, the industry has not reached a status of manufacturing overcapacity, resulting in new investments in the US, Europe and Asia. The world’s largest EV battery manufacturers — LG Chem, Samsung and CATL for instance — are currently expanding their global manufacturing footprints in anticipation of a rapid ramp-up in global EV and hybrid vehicle production in the next five years, with significant investment currently happening in Europe and planned for the United States.

What, however, determines the new era of the global automotive industry even more, for consumers and manufactures alike, is that the shift toward EVs is coinciding with other technological changes such as cars which drive themselves and a growing trend of ride-sharing services as an alternative to personal ownership.

The speed of implementation of new technologies will largely depend on everything from pricing and consumer tastes to competition among existing players and new entrants, as well as the need for billion-dollar factory investments. Since the automotive industry is steadily becoming a data business with its giants having failed to undergo technological developments in the past decade, the doors are open to a number of new players.

In a Bloomberg interview in July, Apple CEO Tim Cook said “We are focusing on autonomous [car] systems.” What is especially interesting in this relation is that, according to a report by Frankfurter Allgemeine Zeitung, Apple has expanded to Berlin, Germany, to work with progressive thinkers on its “Project Titan,” Apple’s electric car project. Germany is still the heart of the traditional automotive industry, so the fact that Apple is going there as well as Silicon Valley shows it understands the difficulties of taking on the car market, but also how seriously it takes this endeavor.

“In the connected age, the car as we know it today will be history.”
— Carlos Lahoz, Director of Sales and Business Planning and Supply Chain Management, Kia Motors Europe

Governments are taking it seriously too. In October the Mercedes-Benz site in Untertürkheim, Germany, received a visit from Thomas Strobl, deputy prime minister and minister for the Interior, Digitisation and Migration in the German state of Baden-Württemberg, in concert with Daimler’s launch of its “Intelligent World Drive Tour,” showcasing automated driving in such locations as the IAA show in Frankfurt; China; Australia; South Africa; and ending at the huge Consumer Electronics Show in Las Vegas in January 2018.

“A worldwide race is currently under way, a race for the mobility of the future,” said Deputy Minister President Thomas Strobl. “Politicians must keep pace with this transformation, and do even more — encourage it wherever possible. Just before the summer, a law commenced its passage through the Bundesrat which represents a turning point for our future mobility. It creates the conditions whereby automated driving can be tested here in Germany. We have closed a very important gap between current legislation and technological development. Manufacturers and consumers now have the urgently necessary and solid framework and foundation for Germany to continue occupying a peak international position in the automotive sector.”

Four strategic areas for the future for Daimler are grouped under the acronym CASE, which stands for networking (Connected), autonomous driving (Autonomous), flexible use (Shared & Services) and electric drive systems (Electric). “The aim is to shape intuitive mobility for customers through intelligent dovetailing of the CASE topics,” says the company, including solutions such as automated valet parking, in partnership with Bosch.

Technology tends to transform an industry, often faster than anticipated. Sales of traditional vehicles will start declining in the next few years, and by 2030, nine out of 10 cars will most likely be self-driving, say some experts. It is in this evolving industry that automakers and suppliers — as well as the locations in which they operate — must reinvent themselves to remain players in the global automotive industry. They all must be willing and creative enough to exploit individual geographical opportunities, such as software developed in California and hardware made in Germany — could that be the new dream team?

“Development progress towards automated driving is especially important for Baden-Württemberg as the birthplace of the automobile,” said Deputy Minister President Strobl. “We have always been well-advised to seek technological solutions to challenges. This is one of the great strengths of Germany, and Baden-Württemberg in particular. Gottlieb Daimler modestly forecast sales of around 1 million vehicles worldwide in his time, and attributed this to the shortage of available chauffeurs. In view of the more than 1 billion vehicles on the roads of the world today, he was quite wrong.

“Automated driving,” he said, “is now our contribution to ensuring that in the near future, the vehicle and driver can be one and the same.” 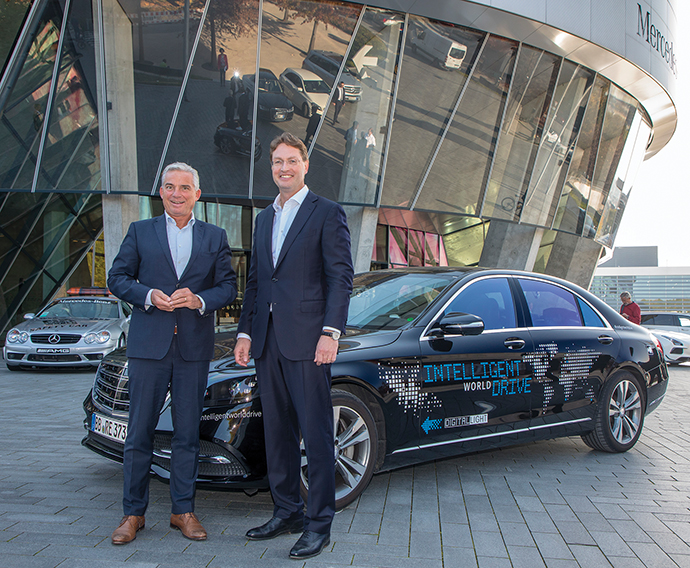 Progress on the path toward autonomous driving was the focus of the visit to Mercedes-Benz in Untertürkheim, Germany, in October by Thomas Strobl (left), deputy prime minister and minister for the Interior, Digitisation and Migration in Baden-Württemberg.