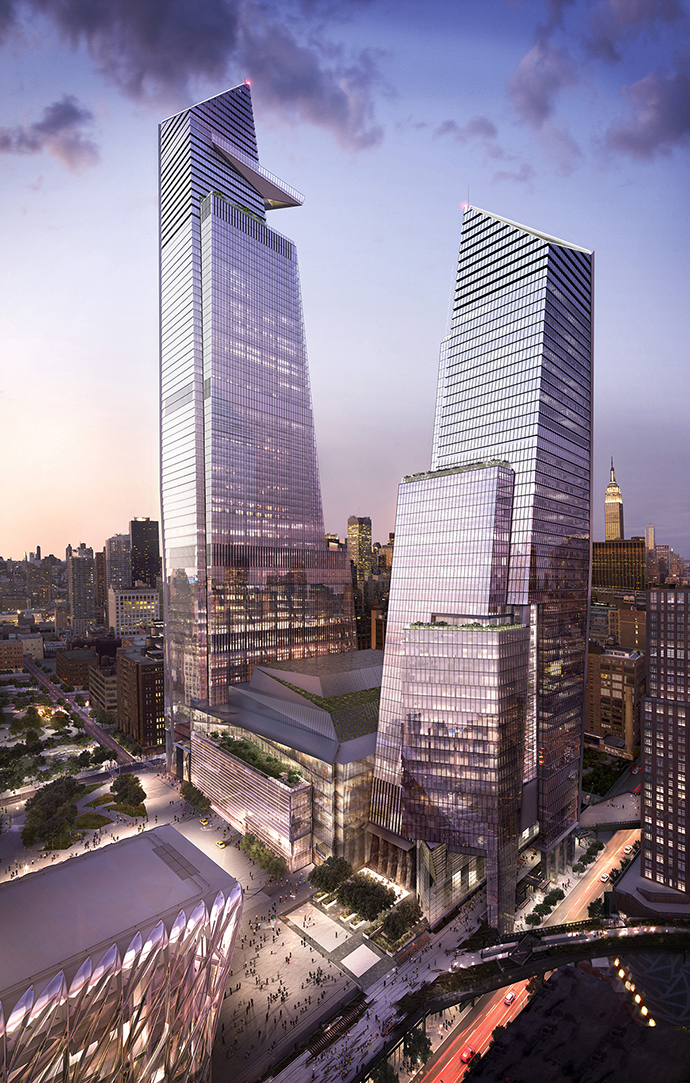 Judging by the appetite for mixed-use in the Big Apple, there’s no such thing as too many cranes.

Three observations in the 39th annual edition of Emerging Trends in Real Estate report from PwC and the Urban Land Institute combine to explain a lot.

In the year leading up to the October publication of the report, half of all office development completions in the US occurred in only three markets: New York, Chicago and Seattle.

At the same time, the co-working phenomenon has struck New York City with such force that WeWork is now the 11th largest tenant in the city (2.12 million sq. ft. or 197,000 sq. m.), surpassing Goldman Sachs — and it’s contagious, with corporate users either trying to be footloose and fancy free themselves, or just buying in and putting people in WeWork space.

Last but not least, some investors are a bit worried about prospects in Manhattan (dropping it to No. 46 of 78 markets), because there were just “too many cranes in the skyline.”

That’s a calamity most cities will gladly suffer through.

It’s true: The project flow from Brooklyn all the way to Westchester’s 30 million sq. ft. (2.8 million sq. m.) of office space is as packed as a Seventh Avenue sidewalk. (Those sidewalks themselves offer another indicator of the city’s current momentum: A study was commissioned in 2016 by the New York City Council to find solutions to sidewalk overcrowding at some of the city’s most congested pedestrian corridors, where people routinely are forced out into the street.)

Judging by the projects dropping anchor across the city’s boroughs, some of those sidewalks might as well extend the whole way across.

In September, just as 238 communities across the nation (including four regions in New York) were putting together their proposals for Amazon’s 50,000-job HQ2, New York City received a hefty package all its own. Governor Andrew Cuomo announced Amazon will bring a 359,000-sq.-ft. (33,350-sq.-m.) administrative office to 5 Manhattan West in the Hudson Yards development. The project will create 2,000 new jobs in finance, sales, marketing and IT that pay salaries averaging $100,000. Amazon, which will invest $55 million to outfit the offices, was offered up to $20 million in performance-based taxed credits through Empire State Development’s Excelsior Jobs Program. The company also will retain more than 1,800 jobs in the state. 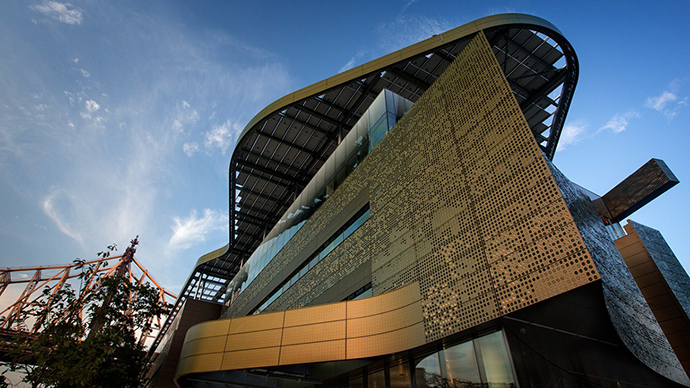 The metal façade of the Bloomberg Center at the new Cornell Tech campus on Roosevelt Island incorporates a pattern created with an algorithm from images of the New York City skyline and an Ithaca gorge.
Photo courtesy of GM

Among other projects from the company in the past five years have been a $9-million Fashion Photography and Videography Studio in Brooklyn, creating over 50 direct jobs, and, in 2014, a 350,000-sq.-ft. (32,515-sq.-m.) administrative office at 7 West 34th Street, creating over 500 jobs. Both of those investments also benefited from the Excelsior program. Just a couple weeks before the 2,000-job announcement, the governor had welcomed a 2,250-job, $100-million fulfillment center from Amazon — the company’s first in the state — that will be built at the Global Logistics Park on the West Shore of Staten Island.

“At the foundation of our city’s success are well-paying jobs in Manhattan’s transit-rich business districts,” said Manhattan Borough President Gale A. Brewer. “I’m pleased Amazon will be expanding in our newest commercial district, Hudson Yards, and welcome them to the neighborhood.”

The 18-million-sq.-ft. (1.67 million-sq.-m.) Hudson Yards development can’t hold a candle to New York neighborhoods when it comes to the character and history only decades can confer. But it’s no slouch when it comes to making history, and making new places for history to unfold. 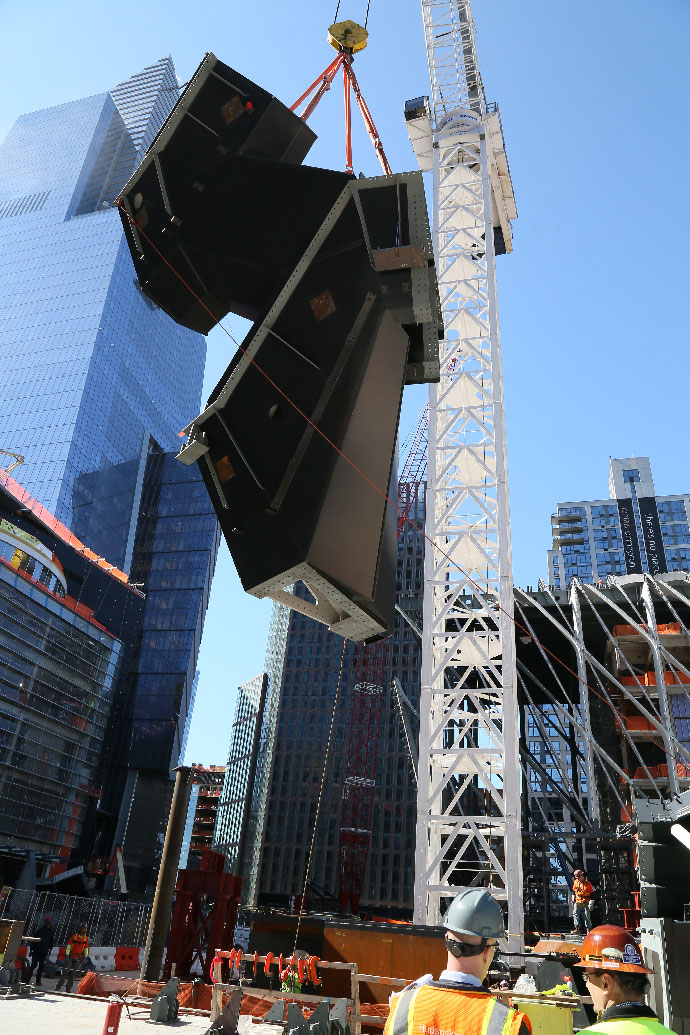 From an investment portfolio perspective, some complain there are too many cranes in New York's skyline. Tech job-seekers, developers and corporates seeking opportunity are not among them.
Photo by Joe Woolhead for Related/Oxford

A couple weeks prior to the Amazon announcement, Hudson Yards developers Related Companies and Oxford Properties Group, along with Mitsui Fudosan America, Inc., announced the closing of the $3.8-billion financing of 50 Hudson Yards, the development’s park-front, 2.9-million-sq.-ft. (269,410-sq.-m.) office tower designed by Foster + Partners. Wells Fargo (which will be a major tenant at 30 Hudson Yards), Deutsche Bank, HSBC, Bank of China and Sumitomo Mitsui Banking Corp. served as co-lead arrangers for the $1.5-billion senior construction loan.

The first phase of development is now fully capitalized, at over $18 billion. Investment management giant BlackRock will be a major tenant of the flagship 58-story tower, which not only boasts the full menu of mixed-use amenities, but a subway concourse below for the No. 7 Subway. The building, which will be one of few on Manhattan’s booming West Side able to put 500 people on a floor, is expected to be complete in 2022.

Mixed-use development is everywhere in the Big Apple, from single-building re-imaginings to entirely new neighborhoods like Hudson Yards. Tishman Speyer is leading the redevelopment of Macy’s Brooklyn department store into consolidated retail space, the conversion of the upper floors to office space and the demolition of a parking garage to make way for new commercial space.

The rising Essex Crossing development covers nine separate Lower East Side sites that had largely been vacant for 50 years, says the real estate group at Stroock, which is advising developers Delancey Street Associates (comprising Taconic Investment Partners, BFC Partners and L+M Development Partners). The projected development costs are around $1.5 billion at Essex Crossing, which just welcomed the International Center of Photography as a major cultural anchor tenant. In addition to schools, the overall development, scheduled for completion in 2024, includes plans for more than 1,000 new housing units — more than half of which will be designated as “affordable.”

Island in the Stream

A campus of a different sort is rising on the city’s Roosevelt Island. But its high-tech and scientific mission melds perfectly with the life sciences, tech and finance surge in the city at large.

Cornell Tech officially opened its campus in what appears to have been a very busy month of ribbon-cuttings for Governor Cuomo, who was there September 12 with former Mayor Mile Bloomberg, current Mayor Bill de Blasio and university presidents from Cornell and Israel’s Technion University, a partner in the novel project. The school’s goal is to be “the first campus ever built for the digital age, bringing together academia and industry to create pioneering leaders and transformational new research, products, companies and social ventures.” In 2011, Cornell Tech was named the winner of the Bloomberg Administration’s Applied Sciences Competition, designed with the goal of diversifying the economy and creating a national hub for tech. It’s built on 12 acres (5 hectares) of land owned by the city.

“In partnership with Cornell, we’ve developed a model of graduate-level technology education that is unlike any other,” said Professor Peretz Lavie, president of Technion-Israel Institute of Technology, “one that’s tailor-made not only for New York City but for the challenges of the digital revolution.”

“Technological innovation played a central role in New York City becoming a global economic capital — and it must continue to play a central role for New York to remain a global economic capital,” said Bloomberg. “The companies and innovations spawned by Cornell Tech graduates will generate jobs for people across the economic spectrum and help our city compete with tech centers around the world, from Silicon Valley to Seoul.”

And even as far as Long Island City, if one city leader has anything to say about it. “Just one stop on the F train to Western Queens, the proximity of the new campus and tech incubator to Western Queens will be beneficial for the people of my district and for the students of Cornell Tech looking to start new businesses,” said City Council Majority Leader Jimmy Van Bramer, not letting the pomp of a grand opening get in the way of a chance to pitch. “With unmatched resources for small businesses, including a diverse and talented workforce, Long Island City will be a natural place for new tech businesses to call home, develop breakthroughs and create jobs.”

As it happens, developer TF Cornerstone has successfully bid to create a new 1.5-million-sq.-ft. (139,350-sq.-m.) mixed-use destination with major office and light industrial components on two NYC-owned parcels along Long Island City’s East River edge. “Long Island City has emerged as one of the fastest growing centers of our city’s economy, especially when it comes to innovation and modern industrial jobs,” said New York City Economic Development Corporation President and CEO James Patchett. “With this project we are creating a first of its kind work-live-play structure, with affordable housing, incubators, and space for cultural institutions. We’re investing in the continued revitalization of the Long Island City Waterfront, and delivering on our commitment to create good, middle class jobs for New Yorkers.”

Cornell Tech started up in a temporary space provided by Google in Chelsea, and has already graduated more than 300 masters and doctoral students, with most entering the New York City tech sector after graduation. 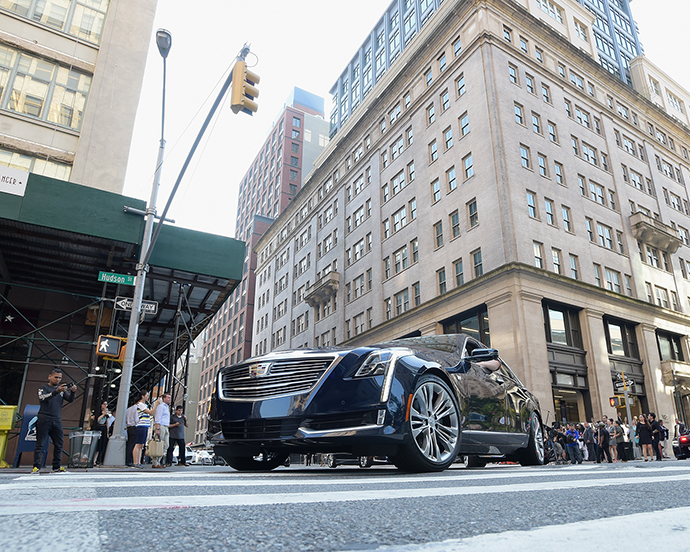 Cadillac’s new global HQ is in New York City’s SoHo, where the company in September embarked on the first official hands-free drive on freeways from one side of the country to the other. Cadillac has been granted a New York automated vehicle testing license under a new law.
Photo courtesy of GM