Maysville Gets Its Mojo Back

The winner of the inaugural Great River Cup is just one of several Ohio River Corridor regions proving attractive to multinational corporate investors. 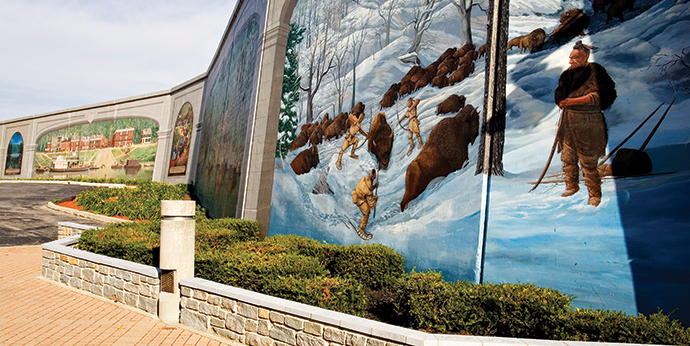 Photo courtesy of City of Maysville
by ADAM BRUNS

For many years, Site Selection has analyzed corporate facility investment figures along the entire 981 miles of the Ohio River. The corridor’s triumvirate of big cities Cincinnati, Louisville and Pittsburgh — in that order, this year — always lead the way in total projects. But examining riverside investment on a per-capita basis offers the opportunity to spotlight smaller communities gaining economic development steam just around the next bend of this historically powerful waterway.

This year, for the first time, we award the Great River Cup to the community leading in per-capita corporate facility project investments: Maysville, Kentucky.

Maysville has about 1 percent of the population of third-place Louisville. But it’s a powerful 1 percent. The town is best known for its most famous family, the Clooneys. First came singer Rosemary and her brother Nick, a journalist and TV host who with his wife Nina begat George. These days, George, his wife Amal and their children still keep in touch with his hometown, stopping by occasionally to sample the fare at Caproni’s on the River or pick up some transparent pie at Magee’s Bakery.

“He’s an old soul,” says Maysville Mayor David Cartmell of Clooney. But Cartmell’s family has dynastic claims of its own. “We’ve been in Mason County politics since 1803,” he says while driving around town on his daily rounds. His grandmother and mother both were elected mayor. “We’ve been in Maysville politics since my great-grandfather ran for town doctor. This will be my 20th year as mayor.”

It’s been among the busiest when it comes to economic development activity, with hiring ongoing at Mitsubishi Electric, Stober Drives and MACA, a Tier-2 supplier of plastics to Honda, among others. Disaster Emergency Services is going to build several warehouses in a district long known as one of the nation’s largest burley tobacco markets — “Success is adaptive reuse,” says Cartmell. A Frito-Lay distribution center is growing. So are AC motor manufacturer Superior Windings, spinoff Superior Composites (glass reinforcement), car door trim manufacturer Green Tokai and JBR Industrial Services.

Cartmell can’t say much yet, but even some of that manufacturing that left town a few years ago may be moving some activity back. After all, he says, “For skilled labor, we are a bargain. I went into a little startup business the other day here, working on gearboxes, and the founder, who had worked at Regal Beloit here, told me you wouldn’t believe the institutional knowledge of this little area of Kentucky and Ohio, partly because many worked at Emerson Electric,” which closed at the end of 2013.

But it’s job openings that are crowding out plant closings today. “I’m really shocked at the number of jobs being created here,” says the mayor.

Among the area’s biggest employers is Carlson Software, a company launched in 1983 that today has a presence in 66 countries, and just held an internationally attended users conference in Maysville. Founder Bruce Carlson recently put several million dollars into a new Parisian-style coffee shop called the Parc Cafe that the mayor says “rivals anything on the Champs Élysées.” Fancy espresso aside, however, Maysville is all about basics.

Continuity is a big part of community success, he says, noting the presence of Gene Weaver as head of the Maysville-Mason County Industrial Development Authority for 16 years, and the longtime leadership of County Judge-Executive Joe Pfeffer. He says people have moved to the area in fits and starts, especially from Kentucky coal country. But “right now we need more workers.” A proposed investment from plant and animal nutrition firm EnviroFlight is pending, and Cartmell anticipates some supplier activity related to the huge $1.3-billion, 550-job Braidy Industries aluminum plant the state recently recruited to South Shore in Greenup County.

The success of primary employers means secondary employers are thriving too. Rural King, a tractor dealer out of Mattoon, Illinois, just hired about 80, says the mayor, “and they said they just had the best grand opening they’ve ever had. 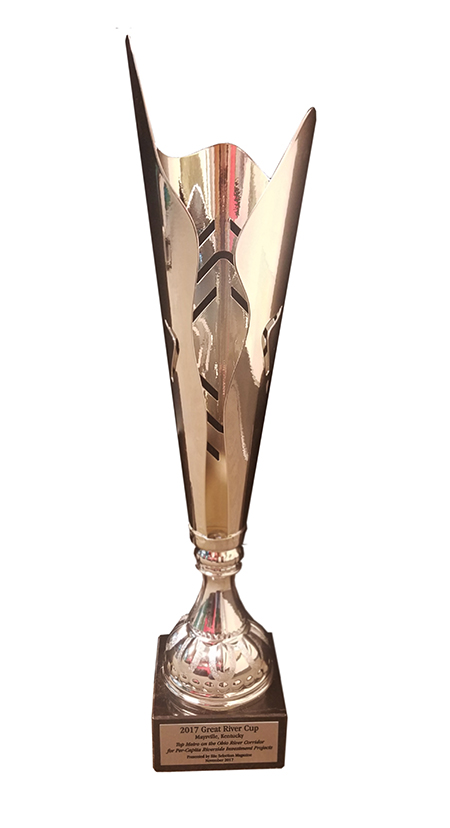 “I’m driving downtown right now,” Cartmell continues, “and looking at a new restaurant that just opened, and it’s packed out at lunch. We want people to come downtown ... There’s a new pride in ownership, with people on the streets. Infrastructure upgrades include new gas mains downtown, $11 million worth of new sewer lines, building a new water tower and getting ready to launch the area’s fourth industrial park. The next step, which he had emphasized at his state of the city address the week before, is complete four-laning of Kentucky Highway 9, also known as the AA, which Cartmell says “gets as much semi traffic as the eastern leg of I-64. It’s a short cut from West Virginia to Cincinnati — instead of driving to Lexington [on I-64] and then going 80 miles north, they go diagonally. We’re slammed, but we’re happy to have the development.”

As for winning the inaugural Great River Cup trophy, Cartmell says, “I couldn’t be more thrilled, and for the people. There’s nothing like having a little money flowing.”

You’ll have to pardon the people of Portsmouth, Ohio, for feeling like winners, even if they came in No. 2 in our Great River Cup rankings. The runner-up finish mirrors a semifinalist finish in last year’s America’s Best Communities competition, a $10-million program that aims to assist community revitalization in small towns nationwide. (The ultimate winner, garnering $3 million, was another Ohio River city: Huntington, West Virginia.)

Projects tracked by Site Selection in the area include investments by Yost Labs, Appalachian Wood Floors (AWF), NiSource and Mako Finished Products. As in Maysville, adaptive reuse is the order of the day. AWF’s investment, for instance, will begin the transformation of a former Dayton-Walther industrial site into Portsmouth Gateway Industrial Park.

“Portsmouth, located in Scioto County, is seeing additional business locating to the area due to lower-cost utilities and an abundance of freshwater available from the Ohio River,” says Bryce Custer, a specialist in petrochemical and energy services with commercial real estate firm NAI Spring. “Sub-tertiary” markets in the Ohio River Corridor are gaining momentum, he says, due to their blend of cost-effective rail, highway and river infrastructure.